Jockey Noel Callow has paid a classy tribute to Shane Warne as he rode a horse part-owned by the late spin king to victory on the Gold Coast on Saturday.

Callow saluted Warne, who tragically died in Thailand in March due to a sudden heart attack, with a classy gesture just after he crossed the line.

Jockey Noel Callow paid tribute to Shane Warne, pumping his fist in the air and rolling his arm over in a leg-break motion as he rode to victory on a horse part-owned by the late spin king

The 47-year-old threw his right fist into the air after passing the post, rolling his arm over with a turn of the fingers to in a leg-break bowling action out of respect for the 708-wicket Test legend.

Punters and racing experts were quick to spot the tribute and toast Callow’s gesture on social media. 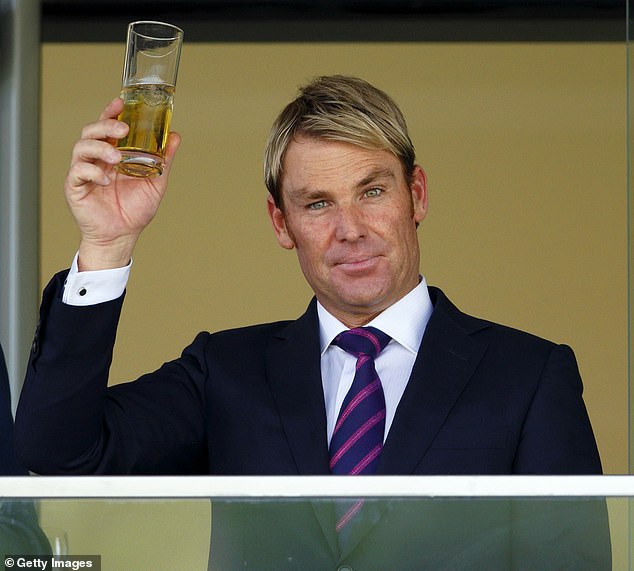 ‘How about Noel Callow giving the leg spin for @ShaneWarne past the post! Incredible to get the maiden out of the way for all connections!’ wrote racing expert Jarred Magnabosco. 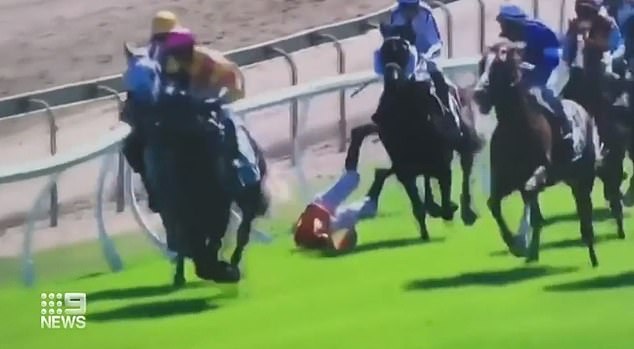 Jockey Ryan Maloney crashes to the turf after Sacred Oath ran into the rails at Ipswich last month. The colt came back from the fall in fine style on the Gold Coast on Saturday

Trained by David Vandyke, Sacred Oath won by a 2.5-length margin after kicking strongly into the straight, which justified its short odds as the $1.40 favourite.

The maiden winner took home $14,500 for its efforts in a terrific recovery after falling at a race in Ipswich last month.

The New Zealand-born horse will now graduate to a higher class, moving out of the maiden plates.