A self-isolating nurse was finally able to hold her two-year-old son for the first time since they separated 11 weeks ago.

Charlotte Cole, 30, said it felt like Christmas as she held on tightly to her son George after nearly three months apart.

George was seen sprinting towards his parents Charlotte and Daniel, 30, as the family shared a loving embrace for the first time since their separation.

Charlotte Cole, 30, (pictured) was able to hold her two-year-old son George for the first time after 11 weeks apart amid the coronavirus pandemic 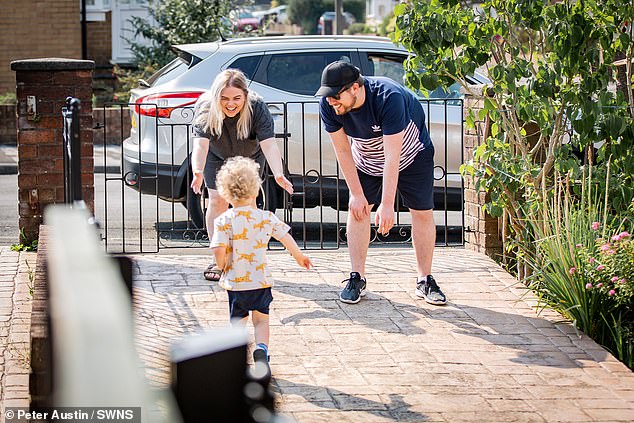 George sprinted towards his parents Charlotte and Daniel, 30, (above) as the family were reunited in person for the first time since their separated

The care quality nurse made the ‘agonising’ decision to move George to her parents’s home on April 1, after a case of coronavirus was confirmed at one of the seven care homes she works in.

The mother-of-one has only been able to see her son through the safety of a window while she self-isolated.

But on Friday evening, the family were finally reunited as the government’s easing lockdown restrictions ended their separation.

Charlotte, from Kirkham, Lancashire, said: ‘We went to pick him up and he came running at us – it was so overwhelming.

‘I’ve never seen him run so fast and he grabbed on to us so tightly – I never wanted to let him go. 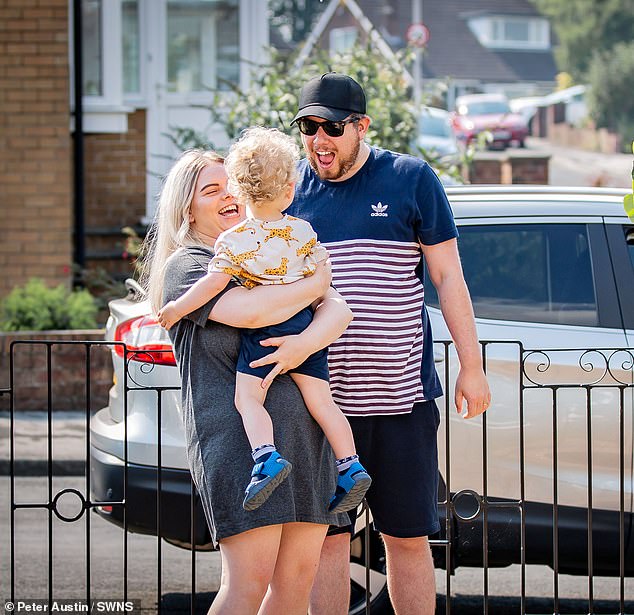 On Friday evening, the self-isolating nurse and her husband were finally reunited with George (above) as the government easing lockdown restrictions ended their separation 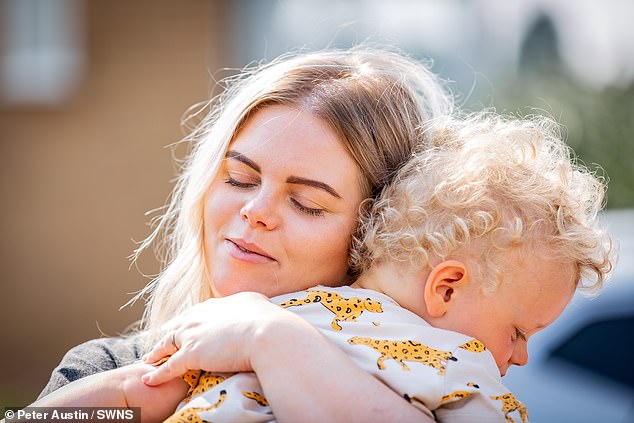 The care quality nurse had to move George to her parents’s home on April 1, after a case of coronavirus was confirmed at one of the seven care homes she oversees

‘It felt so amazing to hold him again and to hear his little voice.

‘I missed all the little things so much, like his lovely blond curls.

‘There were a few waterworks but I tried to put on a brave face but I was an emotional wreck.

‘I was tearing up but I didn’t want to break down and become a blubbering mess. It was just a lot to take in all at once.

‘I missed him so much – he’s just the cheekiest little boy, always laughing, and always up to something.’

Charlotte said she had lost count of the days as little George had been away for so long – but that the first few weeks were agonising.

To pass the time, her and husband Daniel painted their fences and garages until there weren’t anymore surfaces left to daub on. 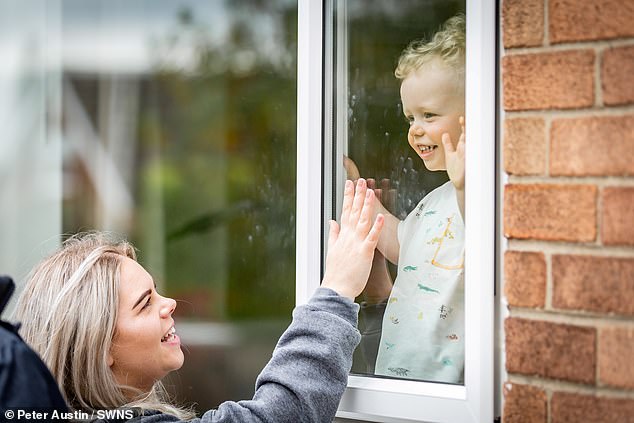 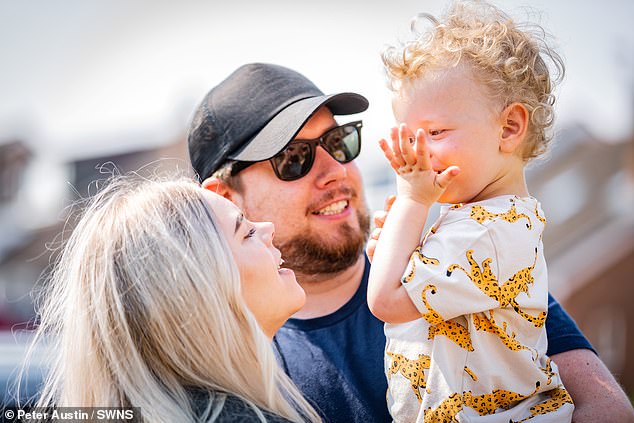 ‘This has been the longest we’ve ever been apart since he was born.

‘I think the first few weeks were the hardest because it was so far removed from normality – I had no idea how to act without my little boy.

‘It was incredibly difficult to adjust to not having him around.

‘The days were so long so we tried to do anything we could to pass the time – we painted the fences, the garage, and we eventually ran out of things to do.

‘We just needed to keep ourselves occupied.

‘We have watched pretty much all of Netflix – at the moment we’ve been glued to Money Heist.

‘Towards the end we were just counting the days until we could see him again, just hoping for some good news.’

She added: ‘I wasn’t able to concentrate at all because he was all I was thinking about, but I bought him news toys and presents. It’s been like Christmas.’ 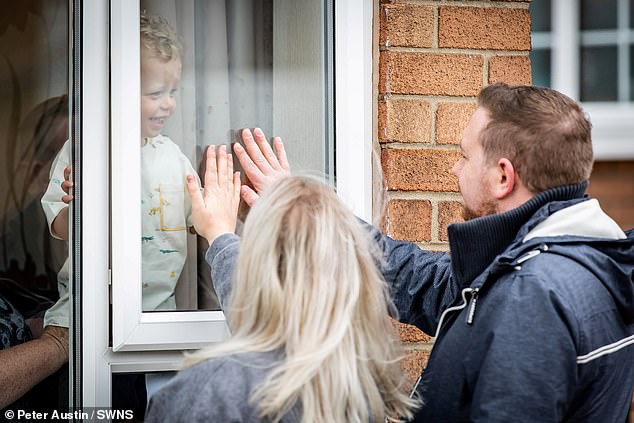 Charlotte said moving George to her parent’s house was the most difficult decision they have ever made but also the easiest, as it was the only way to keep George safe 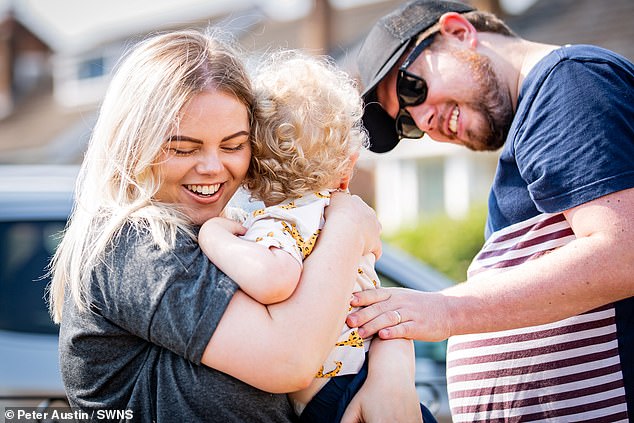 The nurse said it was the most difficult decision they have ever made but also the easiest, as it was the only way to keep George safe.

But now that they are back together, she hopes they never have to be separated again.

She said: ‘I know my parents are very proud of the sacrifices Daniel and I had to make during these 11 weeks.

‘They know how we feel about not seeing George but I’m glad he was with them as they love him as much as anything in the world.

‘It was the most difficult decision we ever had to make but also the easiest as we knew it was the right thing to do to keep George safe and eliminate any risk.’

The family have enjoyed their first weekend back together with Charlotte relishing making meals for three again.

She said: ‘It’s only been a day but it’s been wonderful to have his energy in the house again.

‘I missed making him tea and tucking him into bed.