Star midfielder for Collingwood Taylor Adams suffered a nasty injury during Saturday night’s epic qualifying final against Geelong – but a heart-warming moment with a young fan has lifted his spirits.

The 28-year-old was sidelined with a serious groin injury in the fourth quarter and watched from the bench as his side were beaten in the last minute by a Max Holmes goal for Geelong.

Nursing his season-ending injury, Adams was visibly upset as he left the MCG where he crossed paths two Pies supporters.

Magpie Army I need your help. Following todays game, whilst walking back to the AIA centre. A young girl and her father could see I was flat. The young girl came up to me and offered to hold my hand crossing Swan street, she then gave a massive hug. I would love to find them 🙏

Taylor Adams suffered a serious groin injury late in the fourth quarter in Collingwood’s thriller against Geelong. Adams would watch from the sidelines as his team was beaten in the final minute

He took to Twitter to explain what happened next.

‘Following today’s game, while walking back to the AIA centre, a young girl and her father could see I was flat.

‘The young girl came up to me and offered to hold my hand crossing Swan Street, she then gave a massive hug.

‘I would love to find them.’

At last count the Tweet has had more than 6668 likes and 508 retweets. 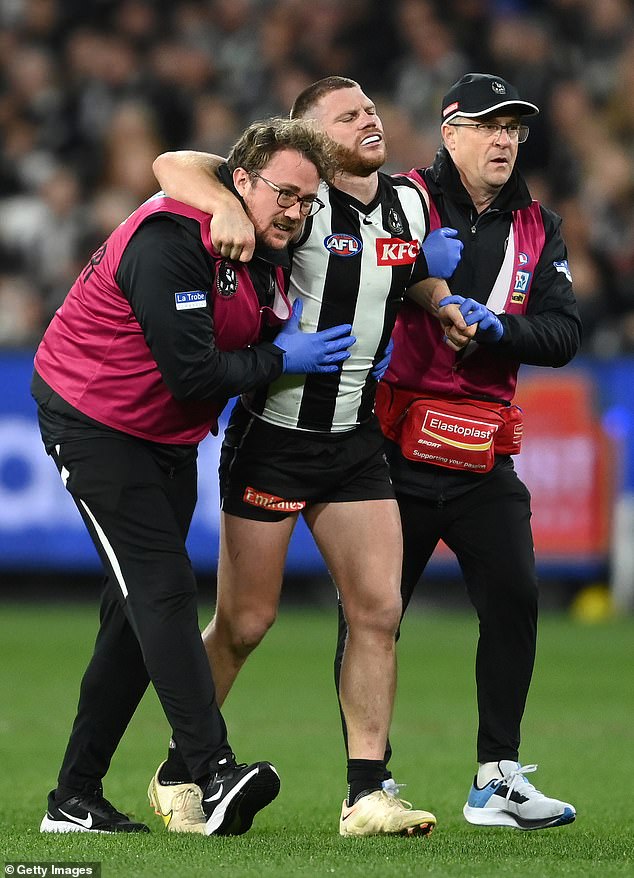 Adams’ season is over and won’t play in next week’s in a do-or-die semi-final clash against Fremantle at the MCG. Leaving the MCG Adams had a touching moment with a young fan who gave him a ‘massive hug’ – and the midfielder wants to thank her

‘That is so cute. Our hearts broke for you Tay. Sending you lots of virtual hugs. We couldn’t have got this far without you this year. You’ll be back better than ever and we can’t wait to see you play,’ said one.

‘You are a champion human being, Taylor! I hope you find them! All the best in your recovery,’ tweeted another.

‘Taylor Adams, ladies and gentleman. Groin ripped off the bone, season over, nail biting finals loss yet wanting to thank a little girl for hugging him. I love this club,’ said a third.

Adams will be sidelined when Collingwood takes on Fremantle next week in a do-or-die finals clash at the MCG. 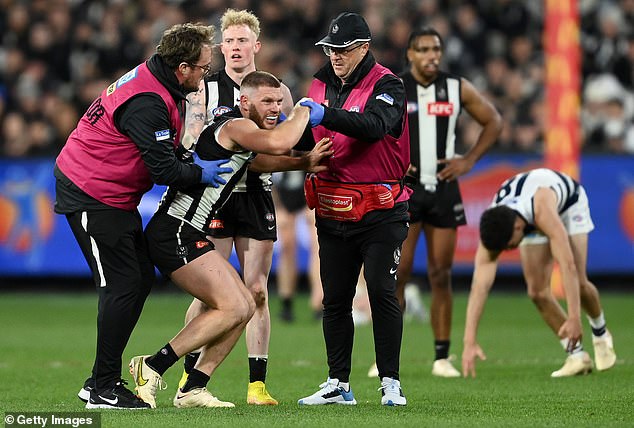 Magpies coach Craig McRae gave further details to the injury after the game:

‘It looks like he might have torn the groin off the bone. That could be the early diagnosis. I just grabbed him then.

‘He’s had his moment of emotion and we’ll get around him and support him as best as we can.’

Former Collingwood coach Nathan Buckley has also thrown his support behind the midfielder. 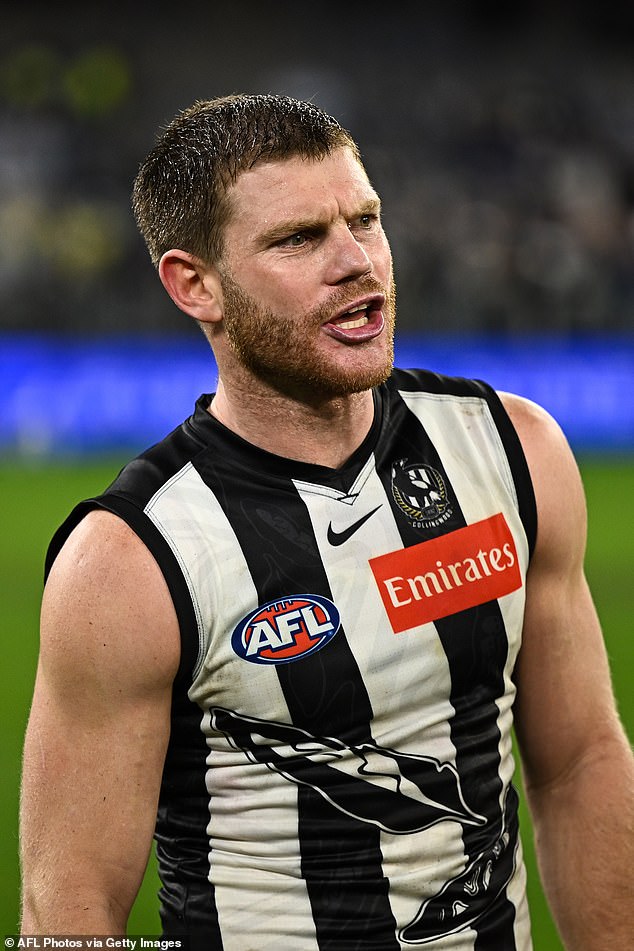 ‘I text ‘Tay’ after the game. I really feel for him because he puts so much into his footy and it’s a big part of who he is as a person,’ he said after the game on Fox Footy’s Best On Ground.

‘But in the last four or five years he’s really grown as a man and he understands that footy is just a part of his life.

‘He’ll lead and he’ll drive this group to whatever its capable of in the short-term and the long-term.

‘He always wants to be a part of it as we all do I suppose with things that we’re passionate about and things that we believe in.’