The scale of the hit to Boris Johnson from the Dominic Cummings row was underlined today as a poll showed his lead over Labour has slumped to just four points.

Backing for the Tories has plunged to 43 per cent over the past week, while Keir Starmer’s party has climbed to 39 per cent. Previously the advantage in the Opinium research stood at 12 points.

The PM’s approval ratings have also crashed from 45 per cent to 37 per cent – with 81 per cent of the public saying they believe his chief aide did break the rules.

The grim figures for the government emerged as Foreign Secretary Dominic Raab admitted he did not know Mr Cummings was self-isolating in Durham, despite being in charge of No10 while Mr Johnson was ill at the time.

Mr Raab said all he knew was that the adviser ‘was out of action because he had come down with coronavirus’.

He added that he ‘was not focused on his movements at all’ and ‘wasn’t aware of them’.

Backing for the Tories has plunged to 43 per cent over the past week, while Keir Starmer’s party has climbed to 39 per cent 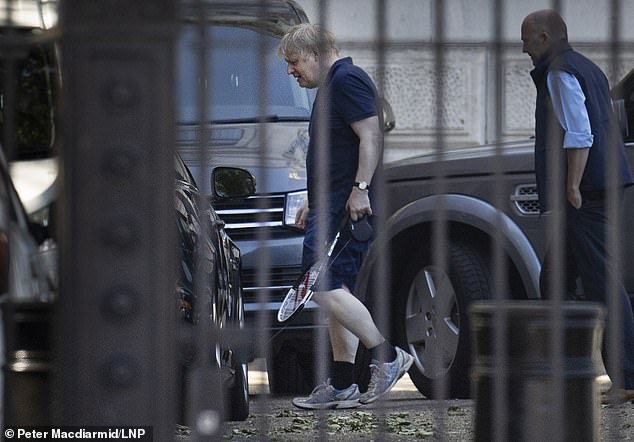 Mr Raab told Sky’s Sophy Ridge on Sunday: ‘To be honest with you, when the story broke was when I first became aware of the detail of it.

‘I just knew that he was out of action because he had come down with coronavirus and, given the situation we were in with the Prime Minister taken ill, and very seriously ill as it later emerged, I was just focused with the Government and with a great Cabinet team on making sure we continued to focus relentlessly on dealing with the virus.

‘I mean I knew Dom was unwell and he was out of action, and obviously I wanted him and the Prime Minister to get well soon, but I wasn’t focused on his movements at all and I wasn’t aware of them.’

It emerged last weekend that in March, Mr Cummings drove from his London home to his parents’ farm in County Durham with his wife – who had coronavirus symptoms – and his son.

In a public statement, the PM’s chief adviser explained he decided to make the trip because he felt it would be better to self-isolate in a place where he had options for childcare if required, and insisted he had acted ‘reasonably’ and within the law.

He added that he had made a 50-mile round-trip to Barnard Castle with his wife and child 15 days later to test his eyesight before embarking on the longer journey back to London.

Mr Johnson has dismissed calls from Tory MPs and scientists to sack Mr Cummings for undermining the government’s lockdown message.

On Friday, Durham police said it had concluded Mr Cummings might have broken lockdown rules, but it would have been a ‘minor breach’. 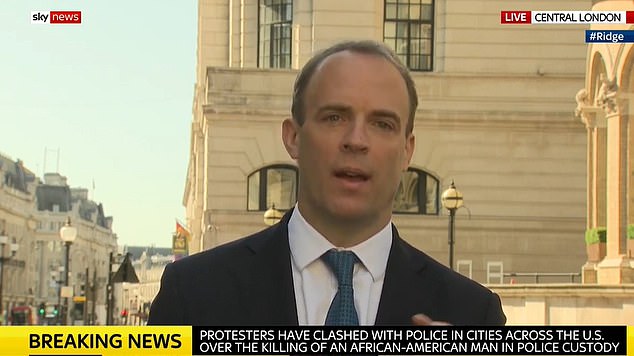 Foreign Secretary Dominic Raab admitted he did not know Mr Cummings was self-isolating in Durham, despite being in charge of No10 while Mr Johnson was ill at the time

‘The Prime Minister has made his decision. You know, you can see the effect of it, you don’t need me to tell you, you can see how people have reacted to it and I’ve written to the people I’m privileged enough to represent to give them my views,’

The Observer reported a letter sent by 26 senior UK academics and health administrators to Downing Street complained about the impact of the key adviser’s actions in driving from London to Durham with his wife and child during the lockdown.

The group also warned about a failure to enact an effective test, trace and isolate system to pinpoint and then quarantine newly infected people.