DUP leader Arlene Foster has met with a representative group for loyalist paramilitaries to discuss the Northern Ireland Protocol amid rising anger at post-Brexit border checks.

The implementation of the protocol since January 1 of this year has caused community tensions to increase.

Loyalists are angry at the new checks on goods arriving at ports, claiming an economic wedge has been driven between the region and the rest of the UK, undermining the Union.

Meanwhile, the European Research Group of Brexiteer Tory MPs is now calling on Boris Johnson to scrap the arrangements, warning the protocol has had a ‘profound and negative effect’.

DUP leader Arlene Foster has called for the Northern Ireland Protocol, set out in the Brexit divorce deal, to be scrapped

The protocol was designed by the EU and UK to avoid a hard border on the island of Ireland and it achieves this by effectively creating a regulatory and customs border in the Irish Sea.

Goods imported into Northern Ireland from the rest of the UK are now subject to a range of new processes which has caused friction at the border and disruption.

There are fears that friction could get worse on April 1 when a grace period currently limiting the bureaucracy applied to imported supermarket goods is due to come to an end.

The UK and the EU are currently trying to negotiate solutions to the problems.

Rising community tensions in Northern Ireland have been illustrated by the emergence of graffiti at ports expressing opposition to a border in the Irish Sea.

Mrs Foster, along with her party’s deputy leader Nigel Dodds and East Belfast MP Gavin Robinson, discussed opposition to the protocol with the Loyalist Communities Council.

It represents loyalists groups including the UVF, UDA and Red Hand Commando.

A party spokesman said afterwards: ‘We listened to the views expressed and the need for political and constitutional methods to safeguard the United Kingdom single market and ensure there is an unfettered flow of trade between Great Britain and Northern Ireland.’

The DUP has urged the UK Government to ditch the protocol, with Mrs Foster previously arguing it had ‘completely ruptured the flow of goods from Great Britain to Northern Ireland’.

The ERG is also now calling for the protocol to be ditched. 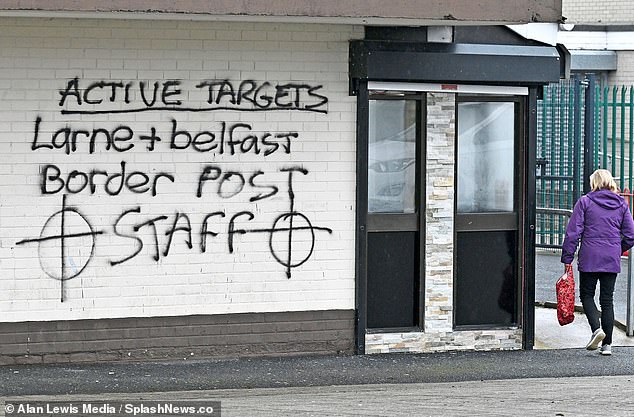 The protocol, which involves checks being carried out on goods entering Northern Ireland from the rest of the UK, has caused rising community tensions at ports

The group said in a new report that the EU’s ‘bungled’ attempt to suspend parts of the agreement during a row over coronavirus vaccine supplies in January – a move which was hastily abandoned by Brussels – created a ‘unique political opportunity’ to renegotiate the deal.

The document said the UK Government should tell Brussels that it intends to pass a new law to ‘redress the trade diversion and societal pressures’ created by the protocol.

Mr Johnson should make a ‘generous offer’ to help meet the concerns of the EU around the Ireland-Northern Ireland border, suggesting ‘mutual enforcement’ would ensure exporters abide by the rules on the other side of the frontier.

That would mean a reciprocal guarantee by each party that it will prevent the export of goods that do not meet the other side’s regulatory requirements.