Deadly tornadoes that ripped through the South this weekend destroyed 1 million homes and businesses from Texas to the Carolinas, as those left homeless in some cases were moved into hotels because opening shelters was too risky because of the coronavirus outbreak.

The storms which struck on Easter Sunday left at least 31 dead and destroyed hundreds of buildings in Monroe, Louisiana, alone.

Monroe Mayor Jamie Mayo was forced to ask hotels to make rooms available for people who were left homeless by the storms when it became clear that the deadly flu-like virus, also known as COVID-19, would make it too dangerous to open emergency shelters.

Deadly tornadoes that ripped through the South this weekend destroyed 1 million homes and businesses from Texas to the Carolinas. Residents comb through the wreckage of a collapsed house in Monroe, Louisiana 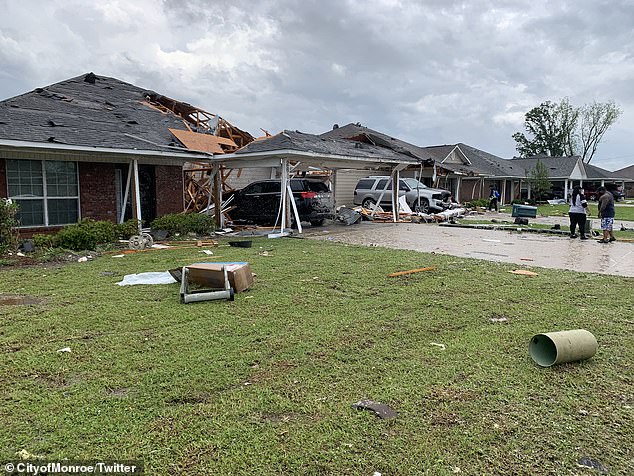 People left homeless in some cases were moved into hotels because opening shelters was too risky because of the coronavirus outbreak. Residents review the damage in Monroe, Louisiana, where at least 31 people died and hundreds of homes and businesses were destroyed 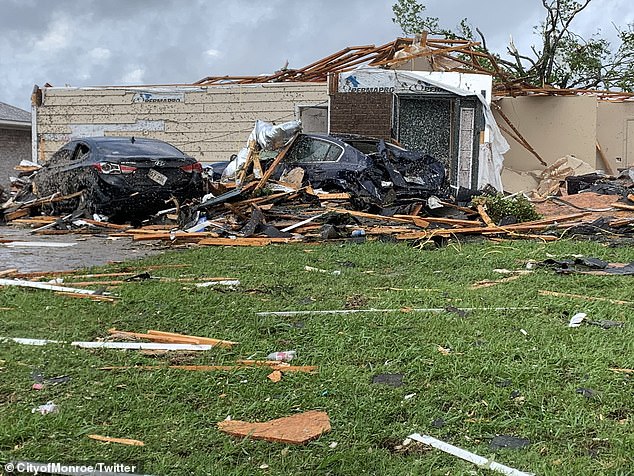 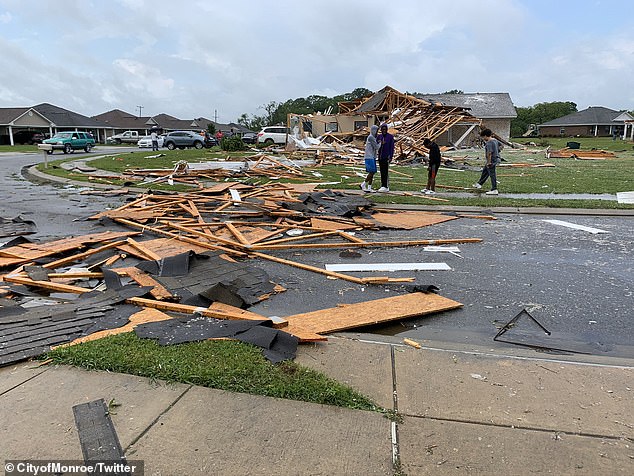 A home in Monroe, Louisiana, is partially collapsed after tornadoes ripped through the area 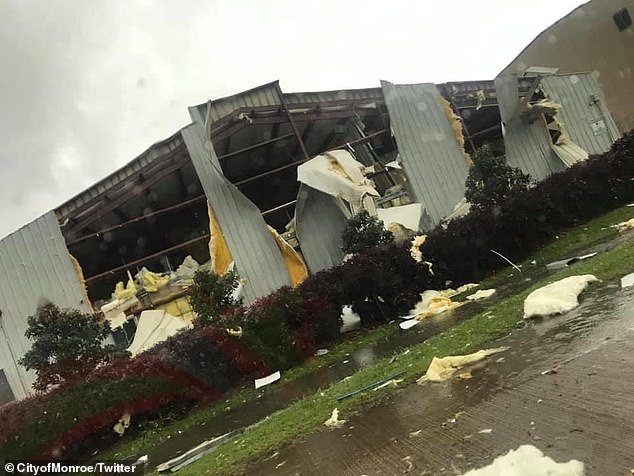 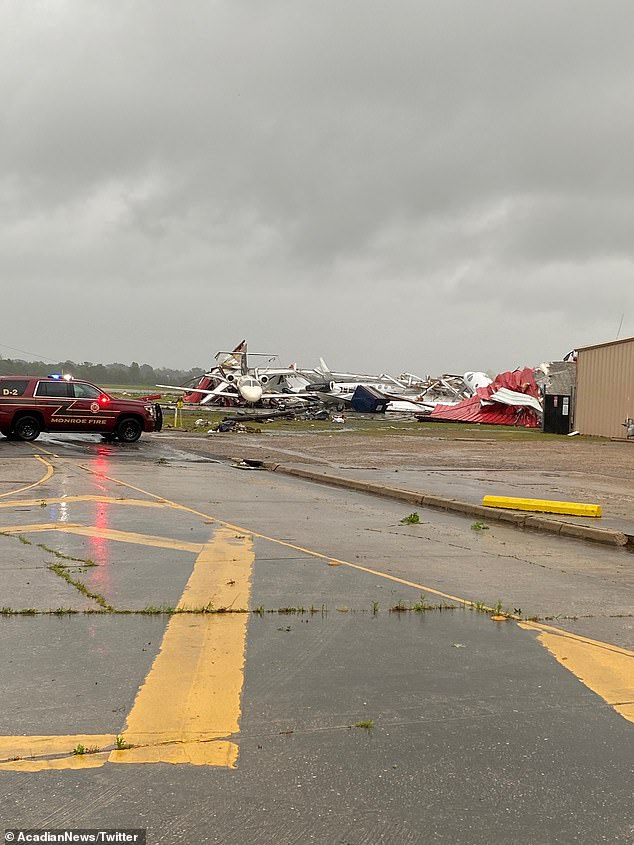 In Chattanooga, dozens of residents from an assisted living home were evacuated by bus to a nearby hotel after the facility’s roof was heavily damaged in the storm, reports CNN.

First responders and other rescuers in areas already overwhelmed by the pandemic were inundated with calls for help.

The Hamilton 911 center had more than 1,300 calls, with 500 calls related to collapsed structures, Amy Maxwell, a spokeswoman for the Hamilton County Office of Emergency Management, told CNN.

Across the states there have been more than 588, cases of the coronavirus, which has been blamed for more than 23,000 deaths. 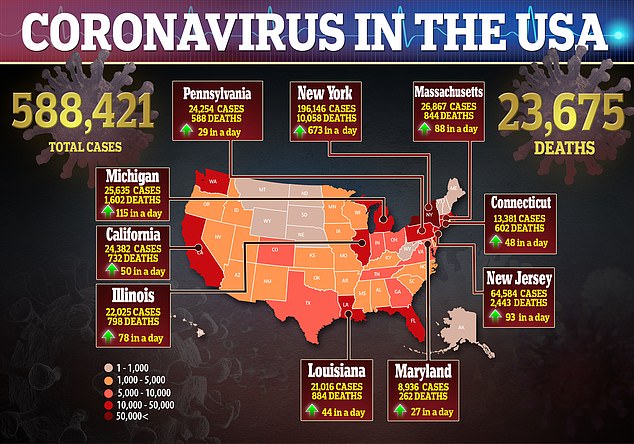 Across the states there have been more than 588,000 cases of the coronavirus, which has been blamed for more than 23,000 deaths 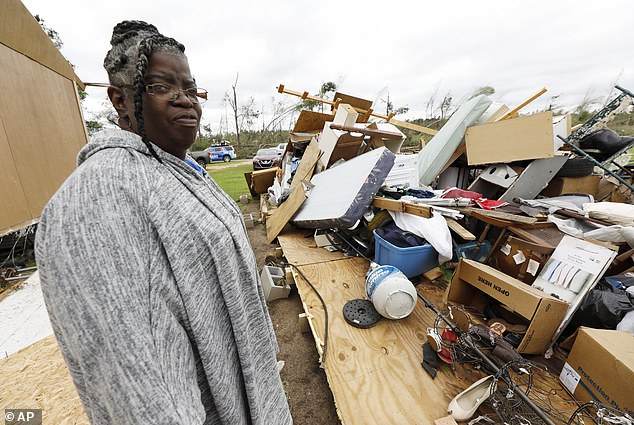 Sheila Varnado pauses before she attempts to salvage personal items from her tornado-ravaged home in Bassfield, Mississippi 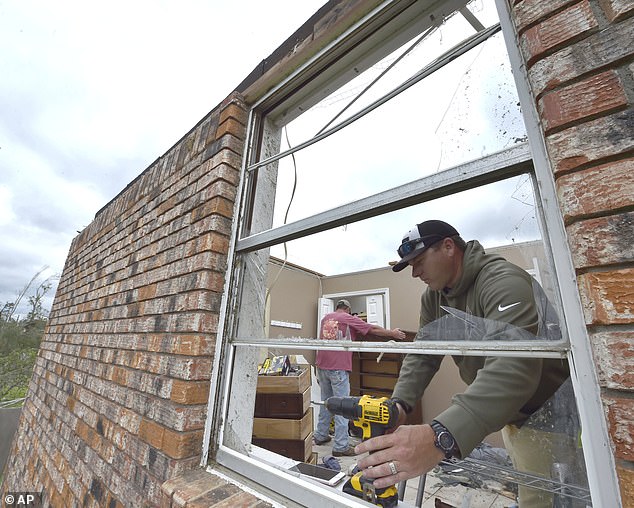 Tyler Heath sets a drill down on the sill of a broken window in the tornado-ravaged home of his cousin-in-law’s in Seminary, Mississippi 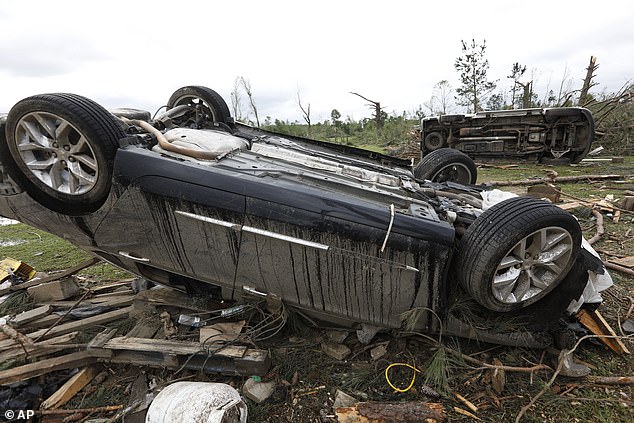 An overturned car rests about 100 feet from a bar and grill in Bassfield, Mississippi 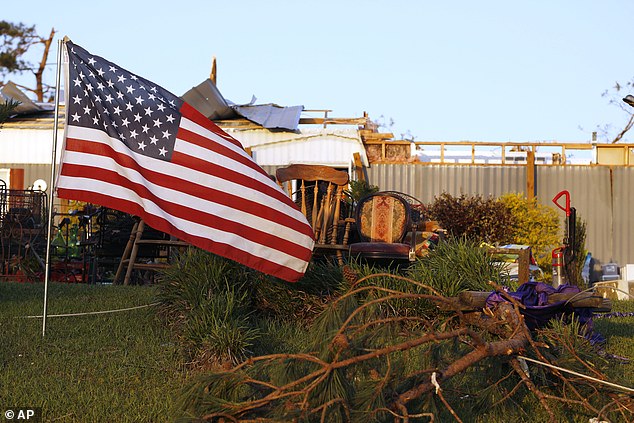 An American flag waves on the front lawn of what remains of Ernie Harrell’s home and workshops in Collins, Mississippi

The outbreak also had delivered a blow to the ranks at the Salvation Army, said Jeff Jellets, the organization’s Southern Territory Disaster Coordinator, since many volunteers are retired, and being older, are more at risk to the virus.

‘We had to look at our typical cadre of workers and shrink it’ to keep everyone safe, Jellets said.

Providing food to tornado victims also had become problematic, Jellets added, as supplies were already exhausted and stores, not being open as many hours as they were before the outbreak, still had empty shelves waiting to be restocked.

Instead, the Salvation Army turned to restaurants to provide food to those in need.

‘As we move forward, I think that will become our new normal,’ Jellets said.

The organization has now responded to three disasters since the start of the outbreak, including this weekend’s. Prior, there were tornadoes in Arkansas and Tennessee recently.

‘It’s almost becoming the new normal for us,’ Jellets said. 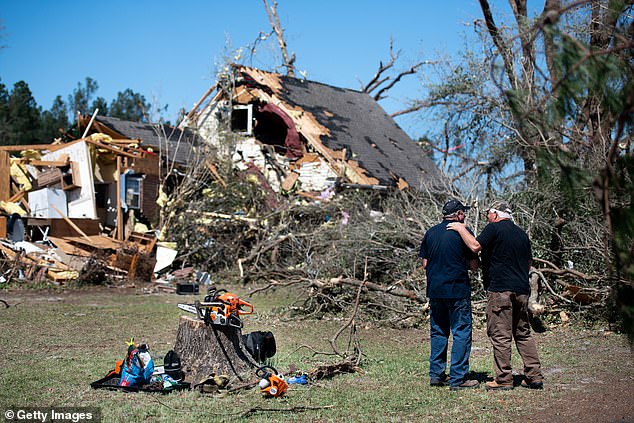 Two men talk in front of a home destroyed by a tornado near Nixville, South Carolina 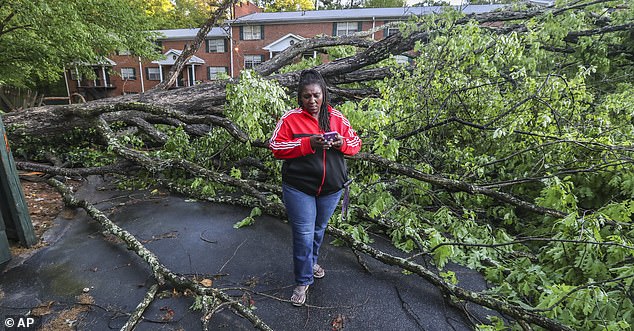 Monique Best took pictures with her phone of her car buried under a tree that fell in the Lexington Apartments where she lives in East Point, Georgia 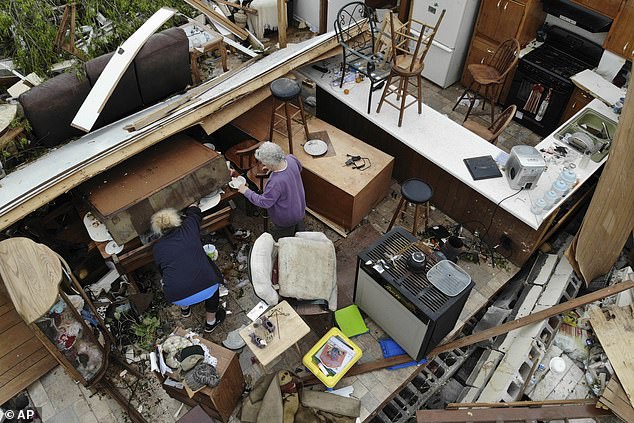 Emma Pritchett’s home in Chatsworth, Georgia, after it was destroyed by a tornado 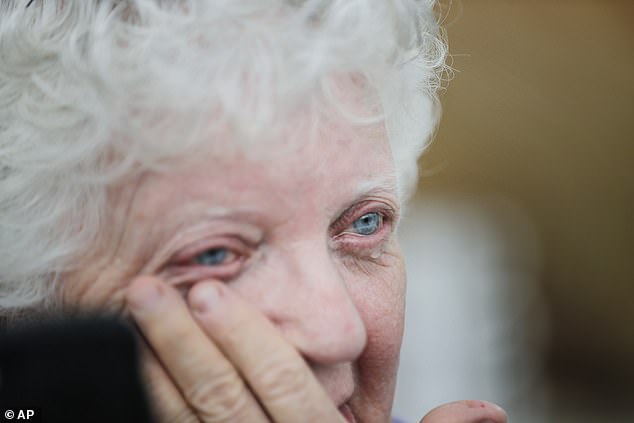 Emma Pritchett wipes a tear away as she looks through her damaged home in Chatsworth, Georgia, after tornadoes ripped through the area

Alabama, despite the state’s stay-at-home order, took the risk and opened shelters.

‘Shelters and community safe rooms should remain open and accessible to all individuals seeking refuge from this severe weather, while implementing reasonable practices and procedures to prevent the spread of Covid-19 among those seeking shelter,’ Gov. Kay Ivey said.

There also were some Alabama cities housing the homeless in ‘hardened shelters,’ not community centers or churches, out of concern of exposure to the virus.

In Louisiana, Gov. John Bel Edwards requested that FEMA allow assessments to be done with photographs to also reduce the risks of people becoming infected.