Most travellers are lured to the Great Migration by documentary footage: hundreds of thousands of grunting wildebeest trudging across vast African plains, their straggly silver beards glinting in the sun; or stampeding herds spilling over cliff edges and crossing rivers as beady-eyed crocodiles lie in wait to pick off the weak.

If it sounds dramatic, it is. The Migration is one of the most heart-thudding sights the natural world has to offer, in which 2.5 million wildebeest, zebra and antelope follow the rains, clockwise, between the lush grasslands of Kenya’s Masai Mara and the wide, open, predator-studded plains of Tanzania’s Serengeti National Park. It’s a continuous cycle that happens every year, the animals constantly moving across huge distances in search of fresh, green pastures.

Yet, as with many of nature’s spectacles, witnessing it comes at a cost — you are likely to find yourself in a melee of safari vehicles jostling for space on riverbanks and struggling to hear the animals over the crackle of radios and chatter of tourists. But there are some rules that can help you get away from the crowds and give you a front-row seat.

Stampede: Wildebeest crossing the Mara River from Kenya. The Migration is one of the most heart-thudding sights the natural world has to offer

River crossings usually take place between mid-July and late October, when herds are forced to cross the Mara River between Kenya and Tanzania.

Not surprisingly, this is when the parks are busiest and you could find yourself among hundreds of safari vehicles.

But the wildebeest don’t travel en masse. Herds split off and move forwards at slightly different times, which means you can see river crossings outside the peak months.

In June and November, some of the early (or late) wildebeest are commencing their crossings of the Mara River. There is plenty going on away from the rivers at those times as well — June is rutting season for the plains game, when testosterone-fuelled males compete. 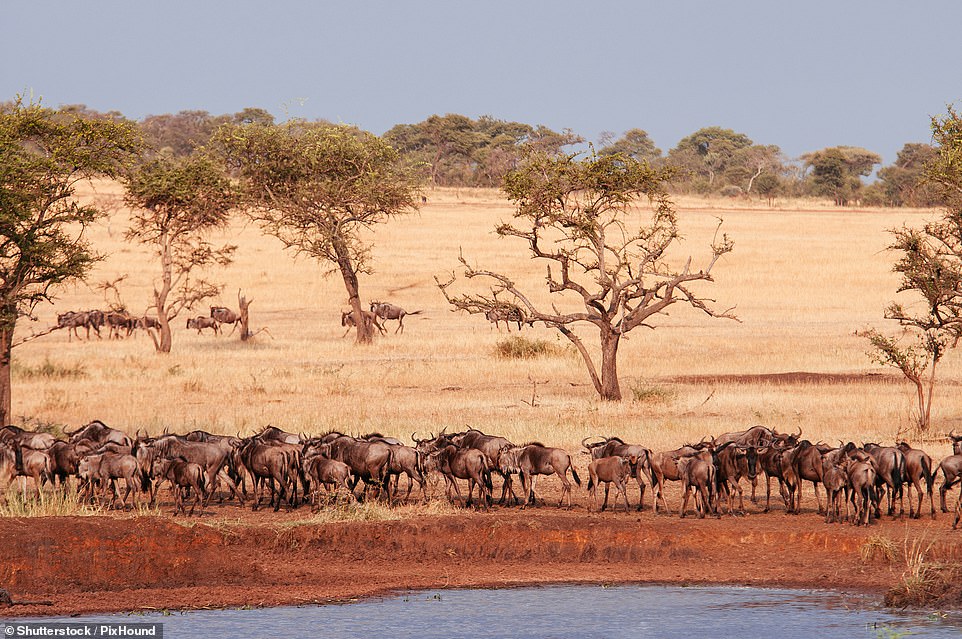 In early June, huge herds build up near the Grumeti River, pictured. However, there is no certain way to predict movements

While the pulse-peaking sight of a river crossing is something you should try to experience once, for something just as magnificent, ask your guide to take you to the plains, where if you’re lucky you’ll see huge herds grunting and kicking up dust.

There is no certain way to predict movements, but herds move at their slowest in October and November, when you can find them clustered in the northern Serengeti, and in early June, huge herds build up near the Grumeti River.

You could be the only humans amid tens of thousands of snuffling wildebeest.

Waterless crossings are another great way to catch an incredible sighting away from the crowds. Dry channels are the perfect hunting ground for leopards, which lie in wait.

Come October, the hoof-beaten plains of the northern Serengeti are replete with dry beds and you may well see the lightning-flash of a leopard on the attack. 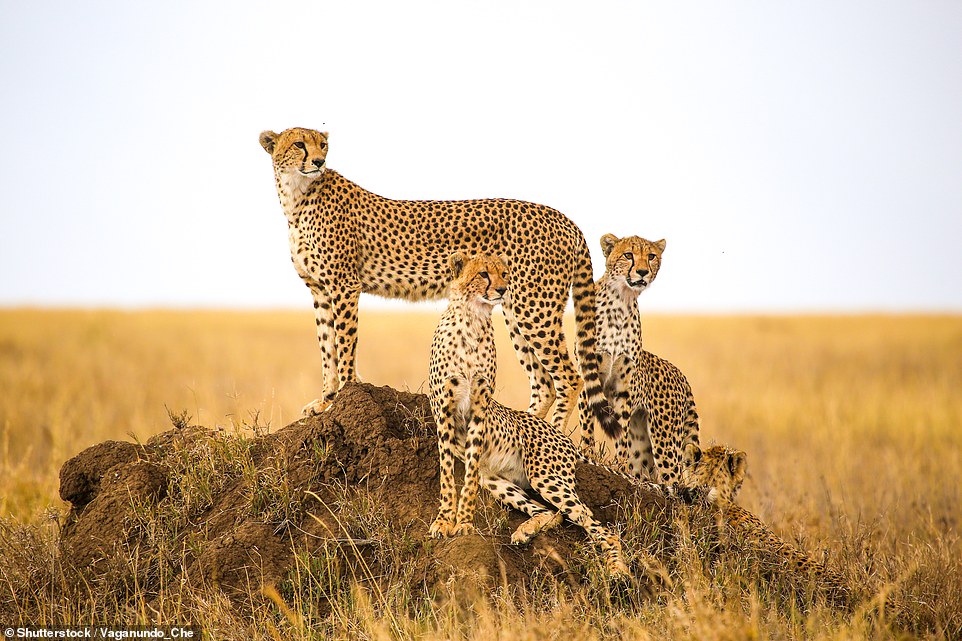 In January and February, the central and southeast Serengeti is where the herds gather in huge numbers to give birth and cheetahs sidle up to snatch newborns

The Migration happens throughout the year in many different parts of the Serengeti, as the herds are continually moving, munching on the freshest grass they can find. In January and February, the central and southeast Serengeti is where the herds gather in huge numbers to give birth.

And where the herds gather, so too do the predators.

You’ll find cheetahs and hyenas sidling up to snatch newborns. It’s a grisly but necessary cycle.

As well as the herds of wildebeest, 250,000 Burchell’s zebras, nimble Thomson’s and Grant’s gazelles, eland antelope and impala take part in the migration.

There are also many non-migratory species about, including elephants, lions and wild dogs. 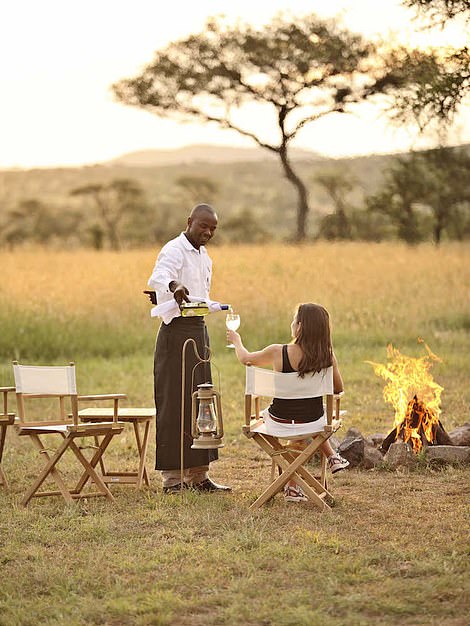 A good safari camp is vital. First, you’ll need seasoned guides with the right contacts for tip-offs about river crossings and a sixth sense for reading and predicting the animals’ behaviour.

Serengeti Bushtops is a wonderfully wild, tented camp in northern Serengeti with great guides. The migration comes directly through the camp, so you could be wallowing in your own private hot tub, icy Amarula in-hand (tents have 24-hour butler service, sunken sofas and outdoor tubs) and watch thousands of nonchalant wildebeest pick their way across the surrounding plains. From £667 a night all-inclusive (bushtopscamps.com).If you’re using a tour operator to plan your trip, do check camps carefully before booking.

How to do it

Kuoni has a Tanzania Migration private guided tour covering central and southern Serengeti and the Ngorongoro Crater. Ten nights, staying in hotels, lodges and tented camps, costs from £7,650 pp, including meals, flights and transfers (kuoni.co.uk) mobile camps such as Grumeti Migration Camp (from £299 per night; grumetimigrationcamp.com) do a good job on a budget.

THE CYCLE OF LIFE IN THE BUSH 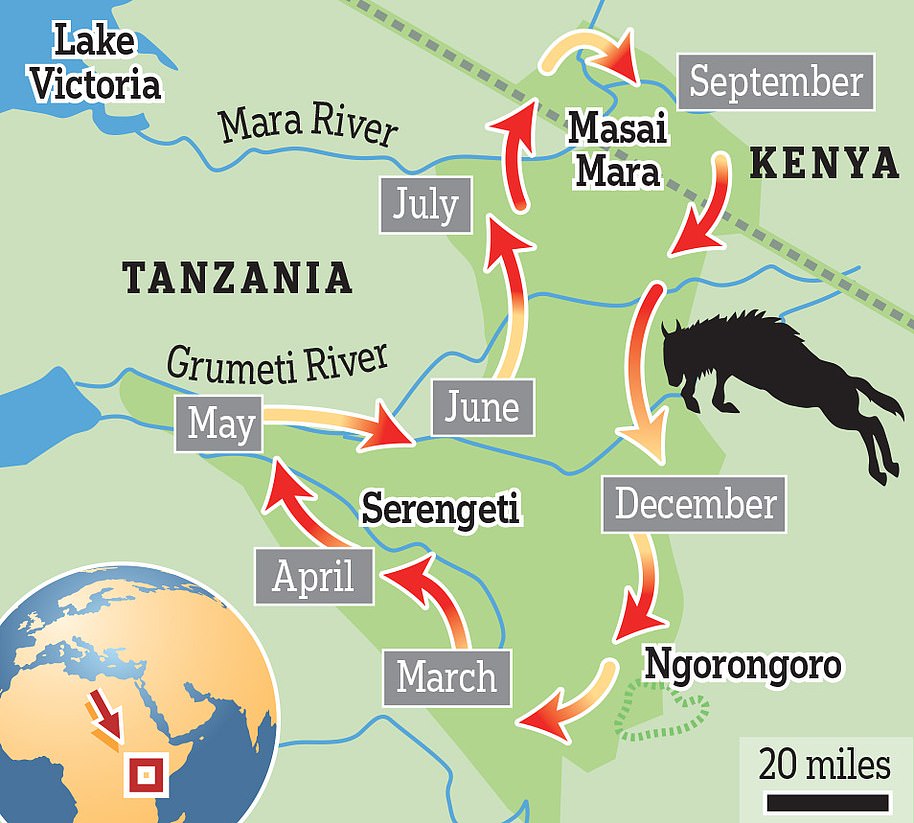 A map showing the direction of the Great Migration. Wildlife can travel up to 1,000 miles between Kenya’s Masai Mara and Tanzania’s Serengeti National Park

More than half a million wildebeest are born each year, between February and March in south-east Serengeti; calves weigh 20kg.

Most are born within a three-week period, allowing the calves a greater chance of survival against predators.

Wildlife can travel up to 1,000 miles between Kenya’s Masai Mara and Tanzania’s Serengeti National Park during the Great Migration.

Wildebeest live to about 20 years old and can weigh up to 270kg, rising at shoulder height to 4ft 6in.

They perform the Great Migration every year.

Wildebeest and zebras are herbivorous and make good travelling companions as they eat different parts of the same grass.

During migrations, as many as 250,000 wildebeest are believed to perish from attacks by predators or from hunger, thirst or exhaustion; about 30,000 zebra are killed off.

The name ‘wildebeest’ comes from the Dutch for ‘wild beast’. Another name, believed to derive from local tribes, is ‘gnu’ (pronounced ‘new’).

Despite looking bovine, wildebeest are antelope.

Number are strong — the International Union for the Conservation of Nature classifies wildebeest as a ‘least concern’ species.