Top Republican says the president has ‘a different set of rules that apply to him’: Rep. Michael McCaul defends Trump taking classified documents to Mar-a-Lago

The top Republican on the House Foreign Affairs Committee said that he wouldn’t have taken classified documents, but defended former President Donald Trump because he has a ‘different set of rules.’

‘I have lived in the classified world most of my professional career. I personally wouldn’t do that,’ Representative Michael McCaul of Texas told ABC This Week host Martha Raddatz on Sunday morning.

‘But I’m not the president,’ he continued. ‘He has a different set of rules that apply to him.’

McCaul explained that former President Trump had the ability to declassify information ‘at a moment’s notice’ when still if office, which is essentially true because presidents have constitutional authority to do so.

‘We don’t have all of the facts. I know they were taken out of the White House while he was president. And whether or not he declassified those documents remains to be seen. He says he did,’ McCaul added.

– 1,673 magazines, newspapers or other printed media

– 14 articles of clothing or gifts

Donald Trump took thousands of materials from the White house when leaving office last year – something that flies in the face of the Presidential Records Act, which requires that all presidential materials are preserved by the National Archives.

Once the Homeland Security adviser to then-Vice President Mike Pence, Olivia Troye told CNN’s State of the Union Sunday morning that if she took classified documents during the Trump administration, ‘I would be in jail.’

The FBI seized empty folders with classified markings, clothes, books and government photographs during their raid on Mar-a-Lago, a new inventory list unsealed by a judge on Friday revealed.

Among the items listed in the documents released Friday are 47 empty folders that were found in Trump’s office that are marked as ‘classified’ and more than 1,500 magazines, newspapers, press articles and other printed media from around his home.

The list shows that several folders found during the raid had classified markings on them – but there were no contents inside. Magazine and news articles were also picked up.

At least 14 items found in the raid were clothing or gift items.

There were also 86 empty folders found with ‘classified’ banners and other labels like, ‘Return to Staff Secretary/Military Aide.’

By far the largest makeup of the materials seized were photographs and documents without classification markings, of which there were more than 11,000 found and taken from Trump’s estate. 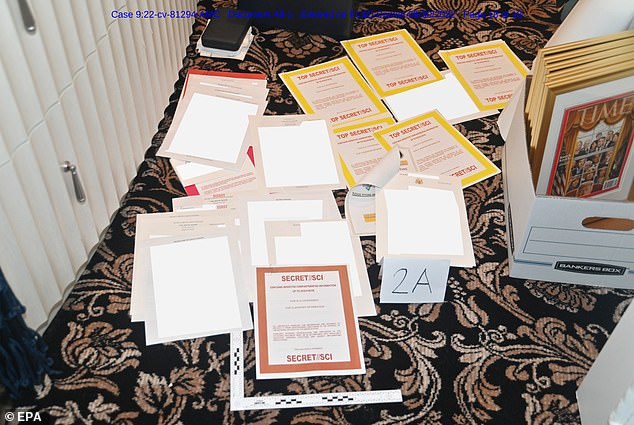 The inventory list of items released Friday comes the same week the DOJ released an image of documents strewn across the floor of Mar-a-Lago, many including ‘secret’ and ‘top secret’ labels

Presidents have the ability to declassify information, as do officials designated as ‘original classification authorities’ within federal departments and agencies.

In these situations the officials are considered to be exercising the president’s power.

There are executive branch regulations laying out the process for declassification, including ensuring agencies and departments with interest in the secret information are consulted.

There are also specific procedures for removing classification markings on documents.

It is not clear what, if any, declassification was done in the materials Trump had in his Mar-a-Lago residence that was seized by the FBI during its raid last month. However, thousands of documents did not have classification markings and hundreds of others did.