EXPRESS INFORMER > Sports > Top of Serie A, Napoli fans are daring to dream of a first Serie A title since the Maradona days

The Napoli fans are dreaming again, dreaming of the return of the Diego Maradona days.

Not since the Argentinian superstar was playing in 1990 have Napoli lifted the Serie A title, but four wins in four matches has them at the summit of the Italian top-flight, with the city in full belief that they can win the Scudetto.

With the city on the slopes of Mount Vesuvius, Naples is now trembling with excitement as every goal from Luciano Spalletti’s side goes in. After their 4-0 thrashing of Udinese, the Partenopei have 10 goals in four games and have conceded just two, exactly the sort of title-winning form required to mount a challenge. 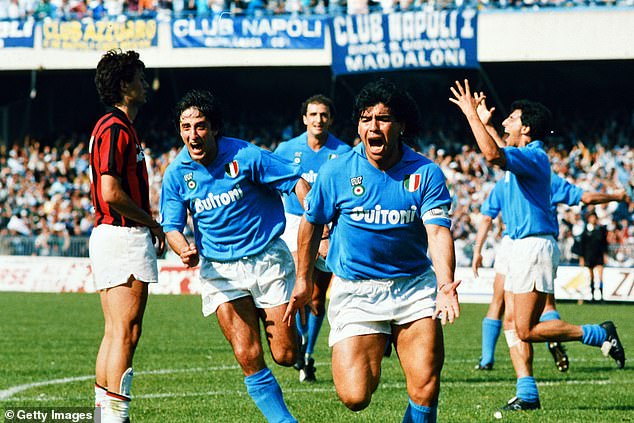 A fantasy story is emerging in southern Italy. In the year Napoli changed their stadium name in tribute to the late Maradona, the squad are playing like the great man is in their squad. Napoli fans are now hoping there’s a happy ending to this tale.

FARMER SPALLETTI TO THE RESCUE

After Gennaro Gattuso’s departure this summer, Napoli president Aurelio De Laurentiis pulled a rabbit out of the hat with the appointment of Spalletti as the club’s new head coach.

After two years away from the game following his failed spell at Inter Milan, Spalletti was almost the forgotten man of football. There was great scepticism from the media after he was appointed, but now he’s trying to wrestle the Serie A title away from the grasps of his former employers with Napoli.

Spalletti has surprised everyone so far, managing to establish a symbiotic relationship with the city, with the fans and with the team. The 62-year-old has channeled the energy of the returning Napoli fans to the stadium into the tenacity of the team. 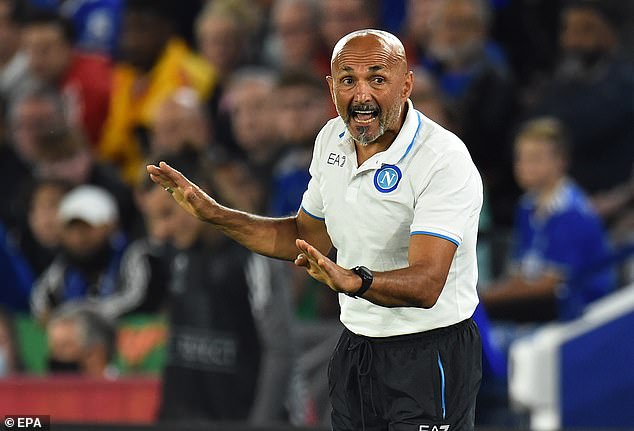 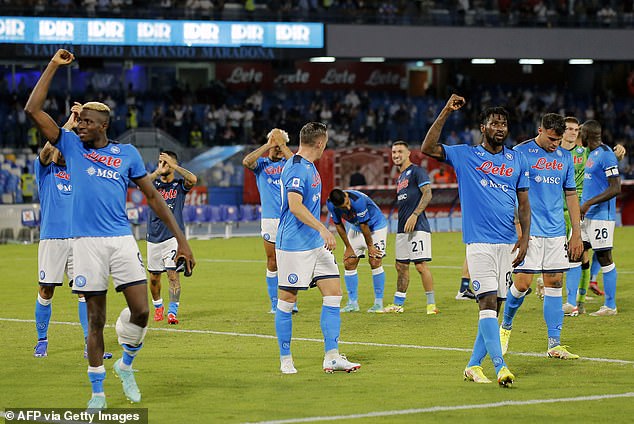 The Partenopei have looked like Scudetto challengers, especially after a 2-1 win over Juventus

The club have not topped the Serie A table in over three years, in the 2017-18 season that saw them miss out on the Scudetto title by four points, and that fan excitement is growing.

While Maradona’s name now overlooks the Napoli stadium, the club are playing in a much more mature way, compared to the Argentine’s era 30 years ago. No longer is there one star they worship: Napoli have 11 lions on the pitch who share the same characteristics.

The 4-2-3-1 formation implemented by Napoli’s new Italian coach seems to be the most elegant outfit for them. Spalletti is the only manager in Serie A who uses this formation and is deemed an expert in this set-up.

Gone is the performance anxiety that saw Gattuso’s Napoli miss out on the Serie A top-four by a single goal. Spalletti seems to have more patience in explaining the movements to be made on the pitch without harassing the players by shouting criticisms at them. 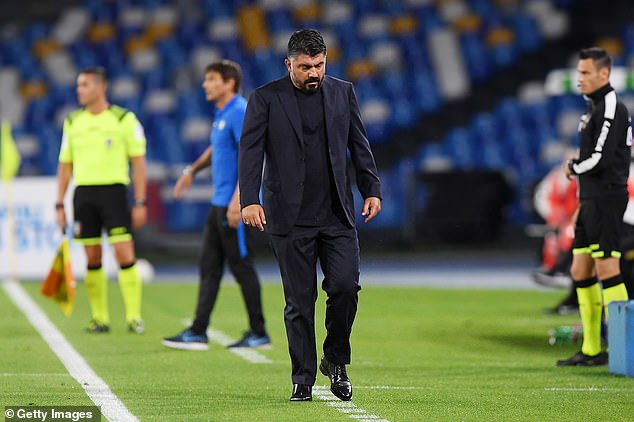 After all, Spalletti is the humble manager who comes from the Florence farmland. His agricultural life is his second passion alongside football and he dedicates himself to the countryside.

The Montaione area near Florence where he originates from is known for being popular with American tourists and oligarchs, as the best wine in the region is grown there. Equally famous is Spalletti’s favourite duck, Snow White, after the Italian manager posted a video of him feeding her a biscuit as if it were a pet over the summer.

Spalletti’s history of growing wine, greenery, fruit and nurturing cows means he knows the importance of patience in waiting for results and success to come.

That was seen in the 2-2 Europa League draw with Leicester last week, with his Napoli side not clicking into gear until the 69th minute when they were two down.

He also has the backing of president De Laurentiis, who said after the 2-1 victory over Juventus earlier this month: ‘Spalletti is a super coach and is never offended, unlike other coaches.

‘I am really happy for this start, I have to congratulate Spalletti who is a very neat, diligent man, who manages things firmly, makes the team play very well and is not offended and has no ego when I ask him for some clarification (on things).’

SUPERSTITION IS THE WAY FOR NAPLES

Spalletti is helped by a city that is simply passionate about football, with Napoli the beating heart of southern Italy.

Every corner of Naples contains whispers and conversations about football, with the most popular topic being the city’s football club’s long 30-year wait for a Serie A title.

The fascination with Napoli is so strong in the ancient Italian city that balconies no longer contain the Italy flag following their Euro 2020 success, with banners showing the logo of the current Serie A leaders replacing them instead. 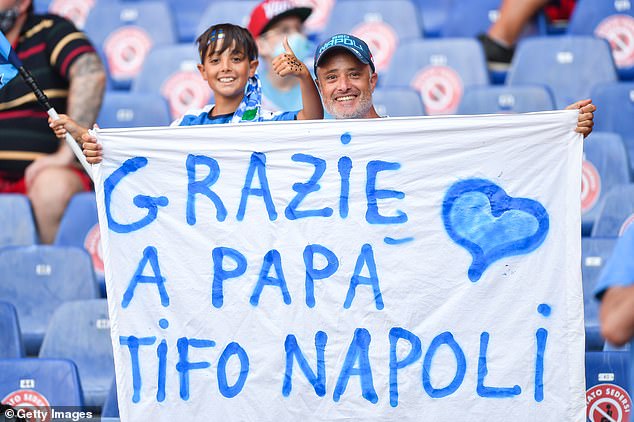 Naples is a football crazy city that is heavily backed by religion (pictured: Napoli fans hold up a banner saying ‘Thanks to the Pope’ after fans returned to football grounds)

Children stride through the streets in Napoli colours as tourists are quickly picked up by the ‘blue wave’ that runs through the city.

Spalletti paid tribute to the city’s fans after his side beat Udinese on Monday, saying: ‘This love that the fans give us can be an important aid, it has already happened a few times but the important thing is to follow this up.

‘Napoli have won the Scudetto in the past, it is clear that the teams that are in the standings with us are strong teams. I would put even one more in because I saw Fiorentina make an excellent start to the championship, so it will be a very difficult.’ 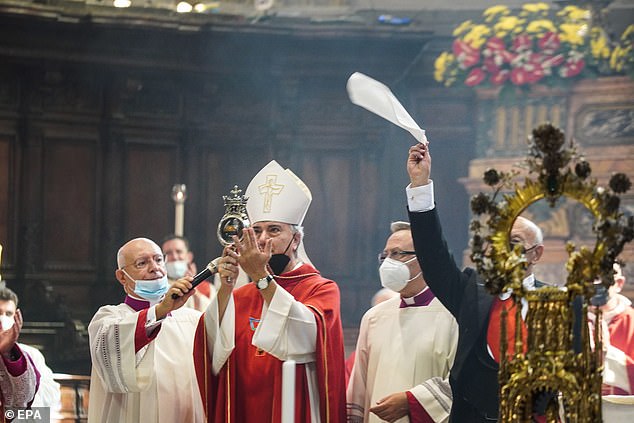 Naples is also a very superstitious city and Napoli fans are hoping to use good luck to help their team win the Serie A title this season.

Sunday saw the traditional ‘melting of the blood’ ceremony in Naples which sees the city’s archbishop liquify the blood of the ancient patron San Gennaro, a ritual that happens three times a year in order to bring good luck to the city.

Despite failed and concerning attempts to melt the blood in recent years, this month’s successful ceremony came just over 24 hours before Napoli’s 4-0 win over Udinese – and the club’s supporters are willing to link the ritual to their football team’s successful title charge.

Napoli’s spine is finally being fixed after it broke during the Gattuso era.

Defender Kalidou Koulibaly is back to his best and is even turning into a goal threat by scoring in consecutive matches against Juventus and Udinese, while Fabian Ruiz has been freed up by Spalletti’s 4-2-3-1 formation and is back in form. 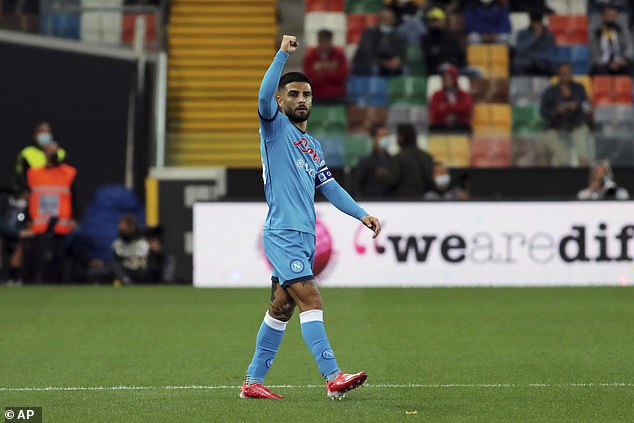 But the key man is Lorenzo Insigne, who plays in the attacking No 10 role that Maradona used to do – and he is playing like the great man is helping him along.

In the Maurizio Sarri days, he used to suffer from panic attacks and was accused of hiding on the pitch and losing his temper far too many times. Now 30 years of age, he is finally becoming a man and is the first to ask for the ball in difficult moments for his side.

Napoli are hoping to tie down their talisman to a new contract lasting until 2026, news that would increase the already fervent atmosphere the city is experiencing at the moment. 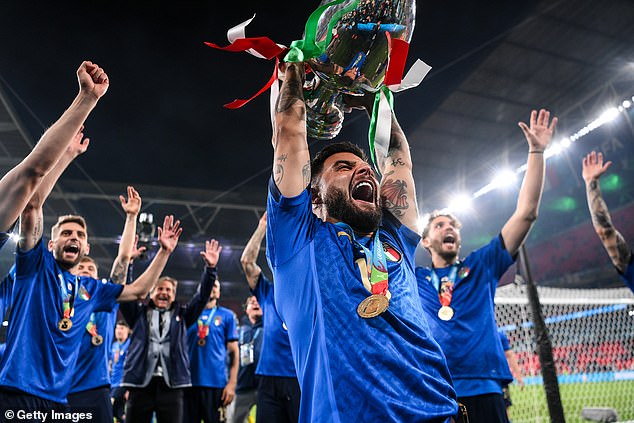 At the moment, however, talks are currently stalling. Reports claim De Laurentiis and Insigne had an hour-long meeting that failed to arrive at a positive ending, with Insigne demanding more money than his current contract that expires next year.

Napoli know, however, that their continued rise in the Serie A table increases their bargaining ability in this Insigne episode.

OSIMHEN IS THE NEW HENRY

Also in Napoli’s spineis striker Victor Osimhen, who had a settling in season in Naples last term but is finally hitting his stride under Spalletti.

The 22-year-old has begun this season with three goals in his first four games, with his own supporters comparing his running style to that of Arsenal legend Thierry Henry.

His brace away at Leicester in the Europa League shows how the Nigerian forward can become a dominant force across the continent, with Spalletti speaking highly of the young striker. 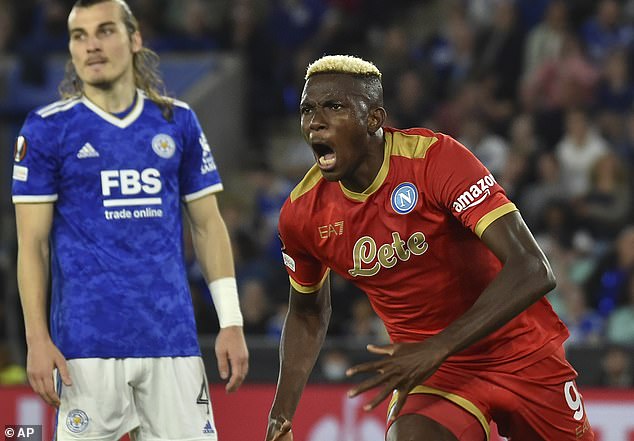 The Napoli coach said after the Leicester game: ‘I am a fan of Osimhen, here in Naples he can become a champion. You can make many comparisons with the strongest in the world but he can and must still improve a lot.

‘He now he must find precision in the choices and movements he makes, sometimes he throws away possession.’

Among the more under-rated players for Napoli this season includes former Fulham midfielder Frank Zambo Anguissa, who is currently on loan from the Championship club.

The 25-year-old has made an immediate impact in southern Italy, putting in a stellar display during the 2-1 victory over Juventus after barely completing a day’s training at his new side. 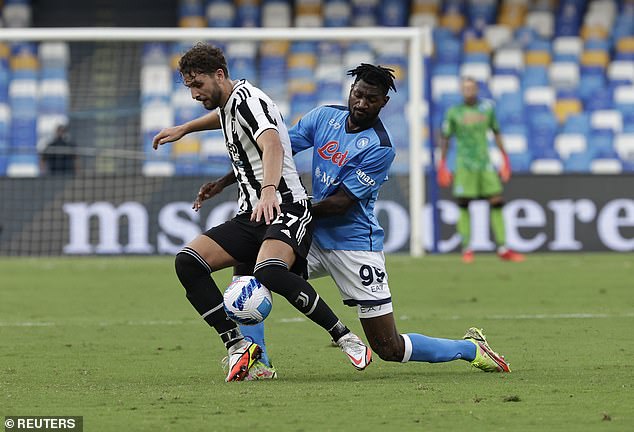 The Cameroonian is now a fundamental part of Spalletti’s side alongside Fabian Ruiz in midfield, with Anguissa deemed to be the heir to Allan, who left for Everton last season.

Anguissa’s performances have been so strong that fans are already concerned when the midfielder has to take part in the Africa Cup of Nations this winter, which could rule him out for three weeks in Napoli’s title charge.