A senior US health official today admitted that controversial Covid manipulation research carried out in a laboratory in Boston was not authorized — despite being funded by taxpayer money.

DailyMail.com exclusively revealed yesterday that a team from Boston University had developed a hybrid Covid virus — combining the Omicron and original Wuhan strains — which had an 80 per cent lethality rate.

Public records indicate it was partly paid for using a grant awarded by the National Institute of Allergy and Infectious Diseases (NIAID), one of the federal government’s main research agencies.

As part of any Government-funded research grants, teams have to explain what the money is being used for and how it will benefit the public.

But today, Dr Emily Erbelding, director of NIAID’s division of microbiology and infectious diseases, said the Boston team did not clear the work with the agency.

She claims she only found out the experiments might have involved enhancing a pathogen of pandemic potential after reading reports in the media on Monday.

Dr Erbelding admitted feeling uneasy about the type of research the grants had been used to fund — given the lingering questions about the role of virus manipulation studies and the origins of Covid.

The team then exposed it to human cells in a petri dish and to live mice. The mutant virus killed 80 per cent of the rodents.

The researchers quickly came under fire from many scientists and politicians alike who said they were ‘playing with fire’ and accused them of conducting ‘gain-of-function’ research.

Pictured above are scientists working at Boston’s high-tech infectious diseases lab in the South End neighborhood of the city. Experiments here were partially funded by the National Institutes for Health 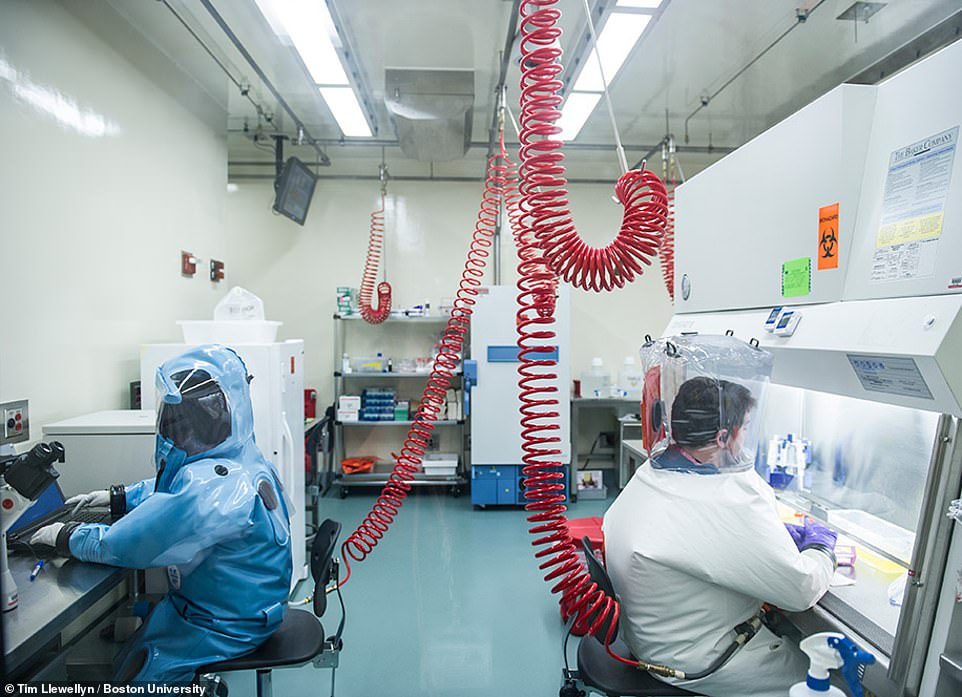 Pictured above are scientists working at the lab. A recent experiment carried out here saw antigens removed from Omicron and placed on the original Wuhan strain. The scientists claim this was to check whether changes to the spike protein had made the virus less infectious 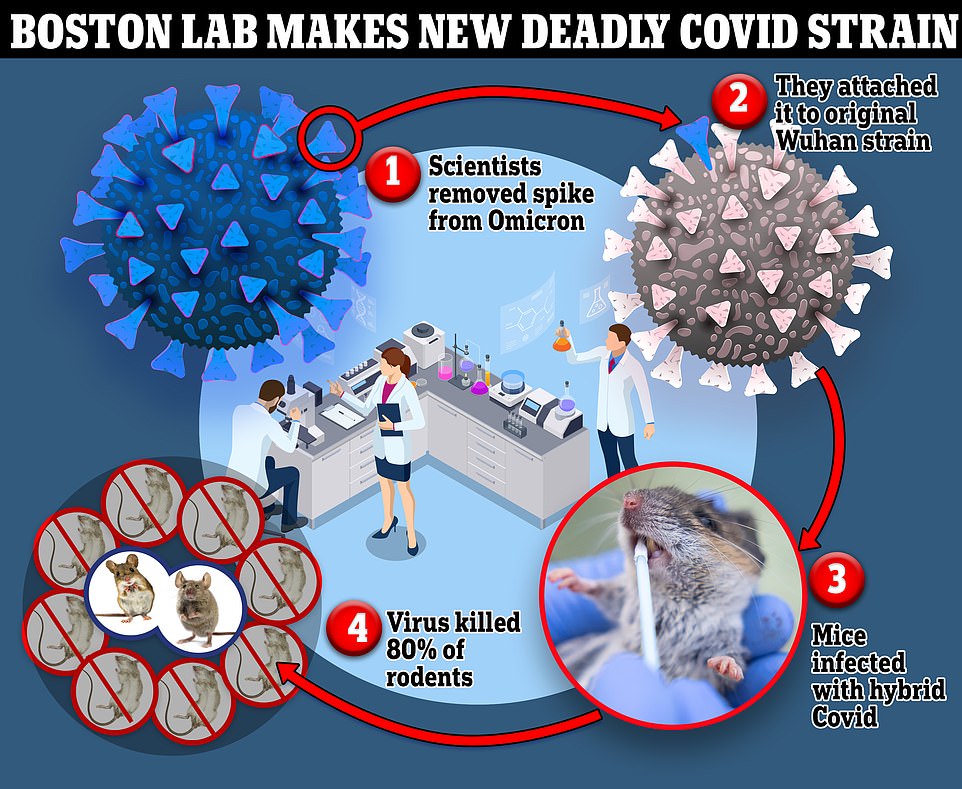 In the new research , which has not been peer-reviewed, a team of researchers from Boston and Florida extracted Omicron’s spike protein — the unique structure that binds to and invades human cells. It has always been present but it has become more evolved over time. Omicron has dozens of mutations in its spike protein that made it so infectious. Researchers attached Omicron’s spike protein to the original wildtype strain that first emerged in Wuhan at the start of the pandemic. The researchers looked at how mice fared under the new hybrid strain compared to the original Omicron variant 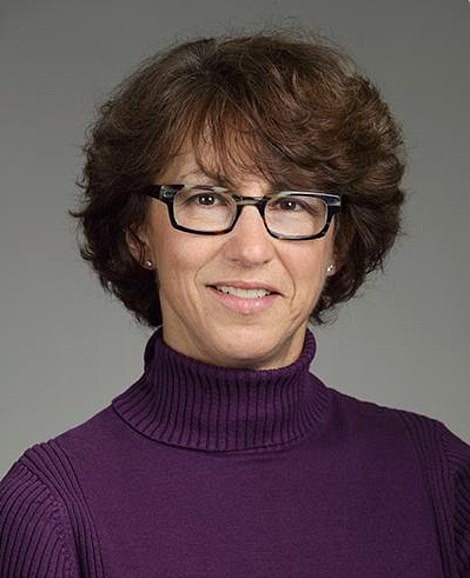 Dr Emily Erbedling, from the division of NIH that part-funded the research, told Stat News that they were not aware of its specific nature

This type of research has become a hot-topic during the pandemic because of theories suggesting it is how Covid emerged.

These types of experiments involved making a disease more lethal or infectious for the sake of studying it and trying to get ahead of future outbreaks.

Boston University insisted it was not technically gain-of-function research because its chimeric virus only killed 80 per cent of mice. The original Wuhan strain, for comparison, killed 100 per cent of the rodents.

A spokesperson for the university told DailMail.com: ‘In fact, this research made the virus less dangerous.’

But independent researchers have already challenged that claim, pointing out that the currently dominant Omicron virus was far milder than the new hybrid variant.

Dr Ebright said she ‘wished’ the scientists had informed NIAID of their work.

She told Stat News: ‘What we would have wanted to do is to talk about exactly what they wanted to do in advance… [and then] we could have put a package forward for review.’

A spokesman for Boston University today told DailyMail.com they ‘did not have an obligation to disclose this research’.

They said the experiments were carried out with funds from Boston University.

‘NIAID funding was acknowledged as a courtesy because it was used to help develop the tools and platforms that were used in this research, they did not fund this research directly,’ they said.

This left them with no obligation to report the research to the agency, they added.

The Boston University study has been published as a preprint in bioRxiv but has not been peer-reviewed by other scientists.

The team removed the spike protein from Omicron — the part of the virus’ structure that it uses to infect cells — and attached it to the Wuhan virus.

The goal of the study was to determine if the mutations in the spike were responsible for this variant’s heightened ability to evade immunity, and whether it made Omicron more mild.

There is now a row about whether the study qualifies as gain-of-function.

Dr Richard Ebright, a microbiologist at Rutgers University in New Jersey, today said it was ‘demonstrably false’ to suggest otherwise.

He pointed out that the edited virus was more dangerous than the Omicron variant which is currently dominant in the United States.

GOP Senator Roger Marshall told DailyMail.com it was ‘unconscionable’ that the US was continuing to sponsor this type of research ‘in densely populated areas’.

He warned it created the ‘potential to kill more people than any singular nuclear weapon’, adding: ‘History has taught us that viruses have managed to search NIAID grants for pe [TYPO?] even the most secure labs.’

‘This is not a risk that scientists alone should be able to take without concurrence from the American public. This research must stop immediately while the risks and benefits can be investigated.’

Senator for Kansas Paul Rand added that he was ‘troubled’ by the news, telling DailyMail.com that oversight of these experiments needed to be strengthened to avoid the next pandemic.

‘As the first senator to hold a congressional hearing on gain-of-function research that can create dangerous new viruses, I am troubled by the news of this research from Boston University,’ he said.

Boston University told DailyMail.com it was ‘false and inaccurate’ to say it had been carrying out gain of function experiments because they did not result in a virus that was more lethal than the original Wuhan strain.

A spokesman said: ‘This was not gain-of-function research.

‘If at any point there was evidence that the research was gaining function, under both NIAID and our own protocols, we would immediately stop and report.

‘All research at Boston University, whether funded by NIAID or not, follows this same protocol.’ 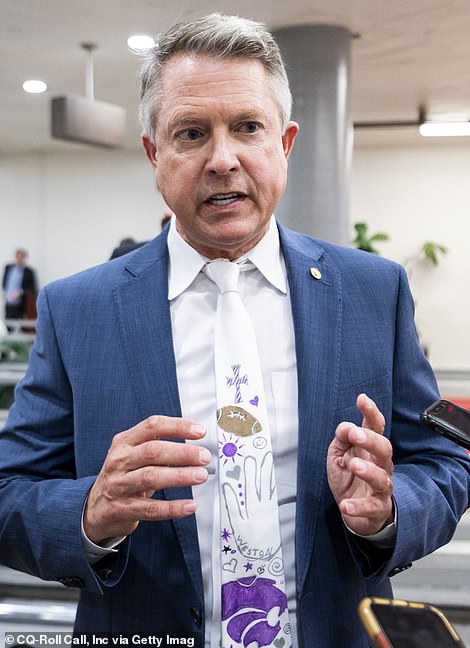 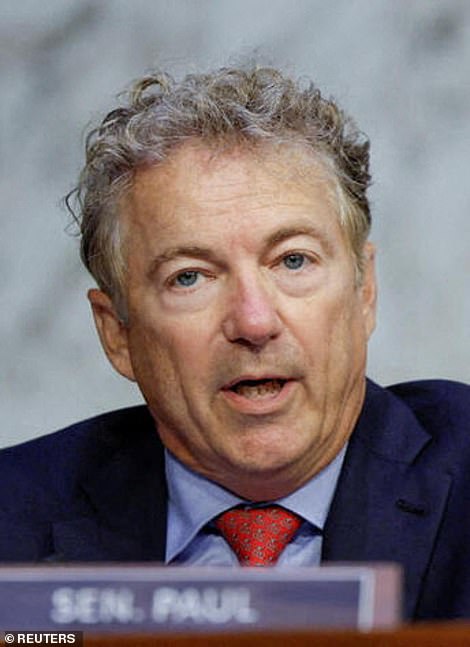 GOP Senator Roger Marshall (left) told DailyMail.com it was ‘unconscionable’ that the US was continuing to sponsor this type of research ‘in densely populated areas’. Republican senator Rand Paul for Kentucky told DailyMail.com he was ‘troubled’ by the news from Boston University

Gain-of-function research — tweaking with viruses to potentially make them more lethal or infectious — was halted in the US from 2014 to 2017 over fears it could inadvertently trigger a pandemic.

But five years ago it was allowed to restart with NIH-backed grants with proponents arguing it could help the world prepare for the next severe illness.

It has been carried out against a backdrop that Covid may have emerged in the Wuhan Institute of Virology (WIV) rather than via jumping from an animal to a human.

At the time the pandemic began WIV was carrying out gain-of-function experiments on similar strains found in bat coronaviruses.

Questions have continued to swirl about the lab’s involvement in the start of the pandemic. Several staff came down with a mysterious flu-like illness months before the official timeline of the pandemic and China has stifled all independent investigations into the lab.

Professor David Livermore, a microbiologist at East Anglia University in the UK, blasted the Boston University research as ‘profoundly unwise’.

‘Given the strong likelihood that the Covid pandemic originated from the escape of a lab-manipulated coronavirus in Wuhan, these experiments seem profoundly unwise,’ he said.

Professor Karol Sikora, a biochemist and past head of the World Health Organization’s cancer programme, told DailyMail.com there was a risk the study may lead to ‘nasty variants emerging’.

Professor Sikora, from Buckingham University in the UK, added that the study had not added to scientific knowledge after tweaking the virus.

‘As was known before its the spike protein that determines whether the virus will bind and enter the nasopharyngeal epithelium but other properties determine how much damage it causes and how long it will last.’

The NIAID is yet to respond to a DailyMail.com request for comment on the grants.

Have we learned nothing? 40 new biochemical labs that handle dangerous viruses are being built around the world

The Coronavirus pandemic has prompted a global surge in laboratories that handle dangerous viruses — despite concerns Covid may have been the result of the risky experiments.

More than 40 facilities certified as biosafety level 3 (BSL-3) or BSL-4 have either been built or have gone into construction since 2020, predominantly across Asia.

Many countries believe they were caught flat-footed by Covid and want to get ahead of the next devastating outbreak by studying pathogens that pose a threat to humans.

Experiments at these labs often involve tinkering with animal viruses to advance treatments and vaccines that could be used in a future outbreak.

But there are widespread concerns that these experiments might actually raise the risk of pandemics — something some experts believe was the case with Covid.

The virus first began spreading from a wet market in Wuhan, about eight miles from the Wuhan Institute of Virology (WIV), a high security biolab that worked with dangerous bat coronaviruses.

Scientists there worked on some of Covid’s closest relatives. They were also found to have wiped crucial databases and stifled independent investigations into the laboratory’s links to the pandemic.

Professor Paul Hunter, an expert in infection diseases at the University of East Anglia in England, told DailyMail.com he was concerned about what all the new labs would be used for.

‘The issue is what you’re going to be using [the labs] for,’ he told this website. ‘If they’re for diagnostic purposes, then you need them. But I don’t think every country needs a BSL-4.’

He added: ‘If they start having a dual purpose for research that has offensive military implications, that is the concern.’

Russia has set out its proposals for 15 of the maximum security labs and India is aiming for 18 BSL-3 and BSL-4 labs in total. The US is also adding a further highest level biosecurity lab to its existing 12.