It’s already been recognised as one of the most popular and successful fund-raising newspaper campaigns in Fleet Street history – and now it’s official.

Mail Force – the groundbreaking initiative which raised a staggering £11.7 million and secured 42 million items of life-saving PPE for frontline healthcare workers in hospitals, care homes and charities – has been honoured at the British Journalism Awards with the event’s first ever Public Service Award.

The Daily Mail’s dramatic intervention was described by judges as ‘jaw-dropping’ and ‘above and beyond the call of journalism’.

Mail Force – the groundbreaking initiative which raised a staggering £11.7 million and secured 42 million items of life-saving PPE for frontline healthcare workers in hospitals, care homes and charities – has been honoured at the British Journalism Awards with the event’s first ever Public Service Award. Pictured: The Daily Mail’s consignment of PPE medical equipment is pictured in Shanghai as it is loaded aboard a Mail chartered plane 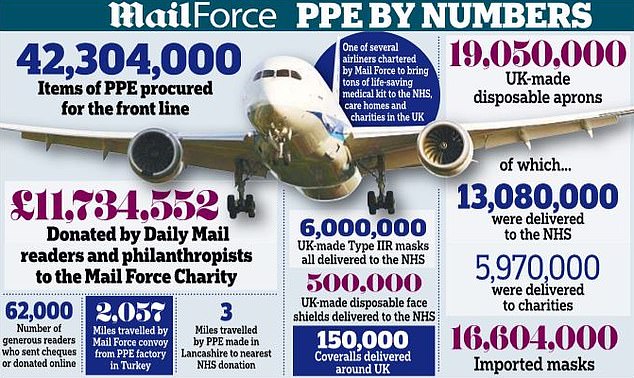 It was also highly commended in the prestigious Campaign of the Year category, where the Mail’s long-standing Betrayal of the Brave campaign on behalf of Afghan interpreters was also shortlisted.

HERE’S HOW TO DONATE

Mail Force Charity has been launched with one aim to help support NHS staff, volunteers and care workers fight back against Covid-1 in the UK.

Mail Force is a separate charity established and supported by the Daily Mail and General Trust.

The money raised will fund essential equipment required by the NHS and care workers.

This equipment is vital in protecting the heroic staff whilst they perform their fantastic work in helping the UK overcome this pandemic.

If we raise more money than is needed for vital Covid-1 equipment, we will apply all funds to support the work of the NHS in other ways.

The judges said of the Mail: ‘There are few news organisations in the world which can rival the Daily Mail for campaigning verve and sheer chutzpah when it takes on an issue.

‘At a time when it felt like the country and the newspaper industry was on its knees, the Mail showed that journalism can do far more than just expose problems and shortcomings – it can channel its energy towards providing solutions, in this case in dramatic and potentially life-saving fashion.’

Of Mail Force itself, they said: ‘This campaign was all about action, not words.

‘They raised the money, rented the aircraft, picked up the PPE and distributed it.

‘This was a jaw-dropping campaign which left the rest of Fleet Street standing at a time when help was urgently needed for the NHS.

‘Above and beyond the call of journalism.’

Daily Mail editor Geordie Greig said: ‘Mail Force was a truly extraordinary achievement – and this special award is recognition of the unceasing efforts of the charity that delivered so much vital PPE equipment, the brilliant editorial team and the truly humbling generosity of our magnificent readers.

‘I am immensely proud of this recognition from the judges of the British Journalism Awards.’

The paper was also recognised in features and sport.

Jan Moir was highly commended in the Interviewer of the Year category – a trophy she has bagged in both of the last two years at the Society of Editors’ Press Awards – while Jeff Powell took the runner-up spot in the Sports Journalism category.

With breathtaking campaigns, the best scoops and investigations, brilliant features and award-winning sport, your trailblazing Daily Mail is Britain’s most public-spirited paper… with Britain’s best – and most generous – army of readers.