Chairman of the Joint Chiefs Mark Milley received a warning about what could be a bumpy transition from a retired military buddy on election night 2020 as returns were coming in.

The friend called and told Milley: ‘You are an island unto yourself right now. You are not tethered. Your loyalty is to the Constitution. You represent the stability of the republic,’ according to the book.

Milley was watching the election returns from his home at Fort Myer in Arlington, Virginia.

They wrote that he ‘memorialized the night by keeping his own scorecard of states in his journal.’

Earlier in the day, Milley, Defense Secretary Mark Esper and other officials were briefed about security concerns around the nation, including that if Trump won 10,000 to 15,000 Americans could take to the streets in Washington, D.C. to protest.

Esper – who had been on the chopping block with Trump since June when he refused to use the Insurrection Act on Black Lives Matter protesters – also viewed his potential firing as a security threat.

Chairman of the Joint Chiefs Mark Milley received a warning call from a military buddy on election night telling him that he was ‘surrounded by total incompetence,’ a new book said

Leonnig and Rucker wrote in the book that Esper had NBC’s Courtney Kube kill a story that said he was preparing to be fired by Trump the day after the election.

The story was to also detail Esper’s efforts to help lawmakers on Capitol Hill rename Confederate-named military bases, something that Trump had campaigned against.

Esper feared if it was published before the election, it would trigger a premature firing.

‘He was worried about what Trump might try to do with the military if he were not at the helm,’ Rucker and Leonnig wrote. ‘Esper warned Kube that publishing her story could result in a more compliant acting secretary of defense, which could have worrisome repercussions.’

The story was held.

The authors also detail what happened at the White House on election night.

For one, an inebriated Rudy Giuliani advised Trump to ‘just say we won’ when Michigan and Pennsylvania hadn’t yet been called.

Trump had invited nearly 400 people to the White House for an election night gathering – one that Melania Trump had wanted cancelled – and Giuliani, along with his son Andrew, a Trump aide, were set up on a laptop watching vote tallies in the Map Room.

‘After a while, Rudy Giuliani started to cause a commotion,’ Leonnig and Rucker wrote. ‘He was telling other guests that he had come up with a strategy for Trump and was trying to get into the president’s private quarters to tell him about it.’

‘Some people thought Giuliani may have been drinking too much,’ the authors went on, adding that Trump’s campaign manager Bill Stepien was pushed to go talk to the former New York City mayor.

Stepien, Chief of Staff Mark Meadows and Trump spokesman Jason Miller took Giuliani to a room off the Map Room to hear the so-called strategy.

Giuliani then asked the state of play in certain swing states.

He asked about Michigan.

Trump’s advisers said it was too early to tell.

The Trump lawyer then asked about Pennsylvania and got the same response.

The strategy, the authors wrote, was just announcing that Trump had won states before they were called.

Meadows, Stepien and Miller pushed back.

After Arizona was called by Fox News in favor of now President Joe Biden – a move that produced shockwaves through the White House that night – Giuliani pushed Trump to take his advice. 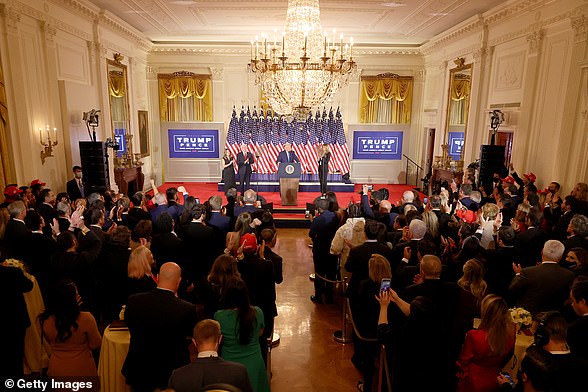 Rudy Giuliani advised then President Donald Trump on election night to ‘just say we won’ when key states like Michigan and Pennsylvania hadn’t been called yet – and later when Arizona was called for his rival, now President Joe Biden, a new book claims

Michigan and Pennsylvania both went blue for Biden.

‘It’s hard to be the responsible parent when there’s a cool uncle around taking the kid to the movies and driving him around in a Corvette,’ one said. ‘When we say the president can’t say that, being responsible is not the easiest place to be when you’ve got people telling the president what he wants to hear.’

‘It’s hard to tell the president no. It’s not an enviable place to be,’ the adviser added.

Especially because Trump believed in the run-up to election night that he would win a second term.

He had just come off a whirlwind tour of the swing states where he attracted large crowds, who had voyaged out to see the president despite the coronavirus risks.

Biden refused to hold large rallies due to the COVID-19 threat, so there was no apples-to-apples comparison.

Florida, Trump’s adopted home state, and a place where the campaign had spent a lot of energy attracting Latino supporters, looked good early on – and Trump would win that swing state.

It was the midwest, Georgia and Arizona that were more problematic.

Trump had also ignored Stepien when he told the president ‘it’s going to be good early.’

Stepien had explained to Trump that he could be up after polls closed, but then see leads get whittled away as mail-in ballots, more likely being used by Democratic voters, were counted.

When Trump saw the numbers change, he suggested something was amiss.

‘Why are they still counting votes?’ Trump asked, according to the authors. ‘The election’s closed. Are they counting ballots that came in afterward? What the hell is going on?’

A spokesman denied that Trump ever said this.

Trump told adviser Kellyanne Conway that something ‘nefarious was at play,’ the authors wrote.

‘They’re stealing this from us,’ Trump said. ‘We have this thing won. I won in a landslide and they’re taking it back.’

Trump’s early proclamation of victory and his paranoia over ballots laid the groundwork for what would be called ‘the big lie.’ 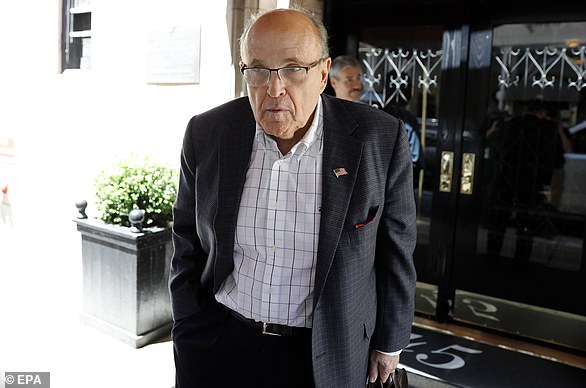 The book I Alone Can Fix It details how Rudy Giuliani, pictured in New York in June, told Trump advisers and then Trump that the president should just say he won Michigan and Pennsylvania and later the entire election, once Arizona was called for Biden

The authors wrote that Trump ‘seemed to truly believe he had been winning.’

Polls had long predicted that Biden would win the White House after Trump’s disastrous response to the coronavirus crisis.

‘And then somehow these votes just keep showing up,’ the aide told the authors.

Leonnig and Rucker’s book is one of a handful of books about the end of the Trump’s time in office that will arrive in bookstores in January.

Last week, Trump preemptively pushed back on the new books.

‘It seems to me that meeting with authors of the ridiculous number of books being written about my very successful administration, or me, is a total waste of time,’ said Trump in a statement sent by his political action committee.

‘They write whatever they want to write anyway without sources, fact-checking, or asking whether or not an event is true or false.’