EXPRESS INFORMER > Travel > Top 50 gastropubs in the UK for 2023 named: ‘Parkers Arms’ in Lancashire is No.1

Britain’s best gastropubs for 2023 have been named – and the Parkers Arms in Lancashire has snapped up the top spot.

The award was handed to the Newton-In-Bowland eatery by the prestigious Estrella Damm Top 50 Gastropubs Awards at a ceremony at The Unruly Pig in Woodbridge, Suffolk – last year’s number one and this year’s silver medal winner.

The top five is completed by Freemasons at Wiswell in Lancashire in third, with Kent pubs The Sportsman in Seasalter and The Kentish Hare in Tunbridge Wells fourth and fifth respectively.

Below is the lowdown on the mouthwatering top ten. Scroll to the very bottom to see the ranking in full, which lists a grand total of 100 pubs… 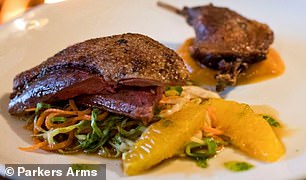 Rising from second to first, Parkers Arms is described as a ‘little gem’ that ‘takes pride in sourcing local produce from the very best suppliers’.

What’s on the menu? The judges say that you can expect ‘plates of food served with the intention of filling you up’ paired with local cask ales and a wine list that ‘caters equally to cheerful lunches or long, indulgent suppers’.

The female-owned pub is headed up by Kathy Smith and Stosie Madi and lies ‘deep within’ the Lancashire hills.

The judges note that the eatery is ‘possibly the most idyllic pub’ on the list, adding its ‘isolated location works in its favour, commanding stunning views of rolling hills whether you visit in summer or winter’. 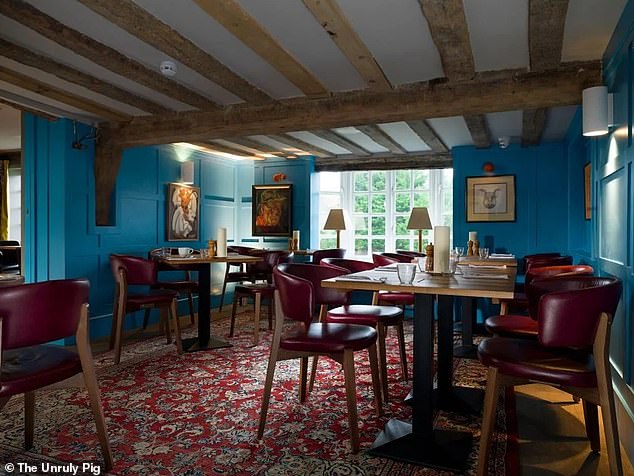 Landing in second place, Suffolk’s The Unruly Pig is housed in a 16th-century inn with ‘beams, crooked ceilings, log burners and a lush, green garden’ 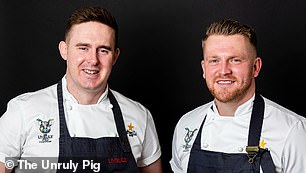 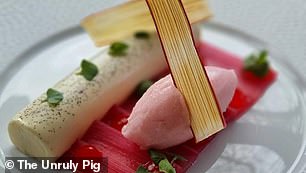 The judges say that head chefs Dave and Karl (left) are the ‘real powerhouse’ behind the kitchen team at The Unruly Pig. The pub serves food that’s ‘a pleasant cross between British and Italian (Brit-Italian) cuisine’

Housed in a 16th-century inn with ‘beams, crooked ceilings, log burners and a lush, green garden’, this Suffolk eatery is owned by the ‘witty and charismatic’ Brendan Padfield, who founded the pub following a 36-year career in law.

Described as ‘winsome and warm’, the pub serves food that’s ‘a pleasant cross between British and Italian (Brit-Italian) cuisine, giving diners a refreshing change from the usual pub fare’.

The judges at this year’s awards – now in its 14th year – reveal: ‘Head chefs Dave and Karl are known as the “dynamic duo” and are the real powerhouse behind the entire kitchen team.’ Menus change at least monthly and there are more than 60 wines available by the glass, as well as Cask Marque-accredited (a prestigious ale accreditation) and hand-pulled beers. 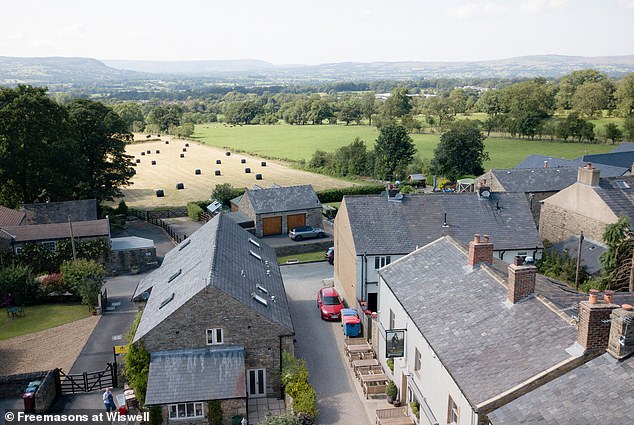 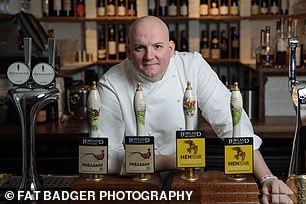 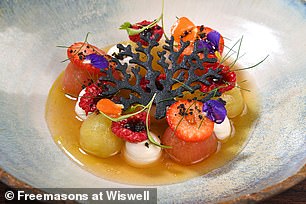 Freemasons at Wiswell is headed by chef-patron Steven Smith (left). He ‘fuses locally sourced ingredients and his love of the classics with wild, sharp world flavours’

Set in the pretty Ribble Valley village of Wiswell, this pub ‘blends the ultimate gastronomic experience in a stylish, relaxed atmosphere’, the judges reveal.

Headed by chef-patron Steven Smith, the food is ‘all about contrast – experimental meeting traditional’. The judges say: ‘Smith fuses locally sourced ingredients and his love of the classics with wild, sharp world flavours… creating a delicious roster of food you have to experience to believe.’

You might feast on butter-poached native lobster tail with crispy claw wontons followed by a serving of Amalfi lemon meringue pie.

The judges add: ‘As well as serving many outstanding dishes, Smith has launched an accommodation offering and his own spin on a chef’s table following a big refurbishment and revamp of the business, which was completed in 2019.’ 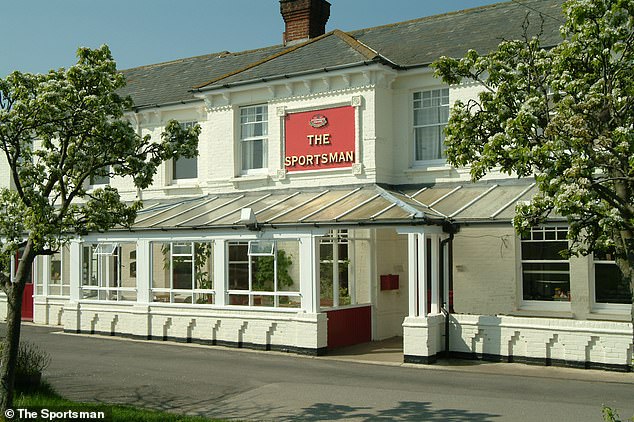 In fourth place is The Sportsman in Kent, where chef-patron Stephen Harris makes sure that produce served is sourced almost exclusively from the surrounding land 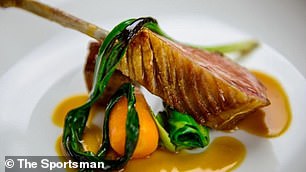 ‘Many foodies the world over have made a holy pilgrimage to The Sportsman in Seasalter, Kent, to sample the delights served within its walls,’ the judges say of this eatery.

Chef-patron Stephen Harris makes sure that produce served at the pub is sourced almost exclusively from the surrounding land, the judges reveal.

They say: ‘Harris, a completely self-taught chef, who abandoned a high-flying career in the city to open his “grotty boozer by the sea”, picks seaweed from The Sportsman’s adjoining beach, makes his own salt from the sea, and uses meat from the bountiful farms of the Seasalter area.’

A must-try, according to the judges, is the pub’s serving of slip sole grilled in seaweed butter. As a bonus, the judges note that the pub is ‘remarkably affordable for an eatery of its standing [the tasting menu is £80pp]’ – though they point out that ‘it remains a tough pub to get a seat in… so plan before visiting’. 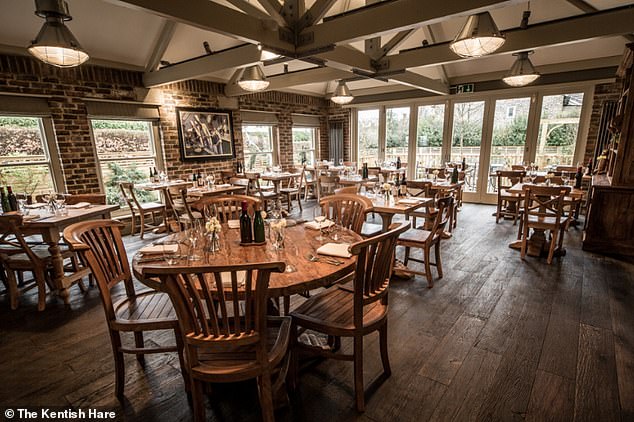 Diners can expect to enjoy ‘tastefully curated’ menus at The Kentish Hare, which ranks fifth overall 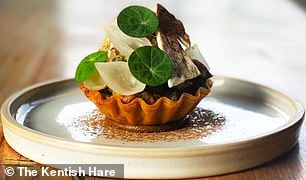 One of the delicious dishes at The Kentish Hare

The judges say: ‘The pub’s menus are tastefully curated with a selection of dishes to ensure diners will return more than once, with two courses priced at £28 and three for £35.’

The judges add: ‘The pub is split almost fifty-fifty into dining and bar space, which has been done purposefully so the pub can have a real community feel.’

6. The Angel at Hetton, Hetton – Yorkshire 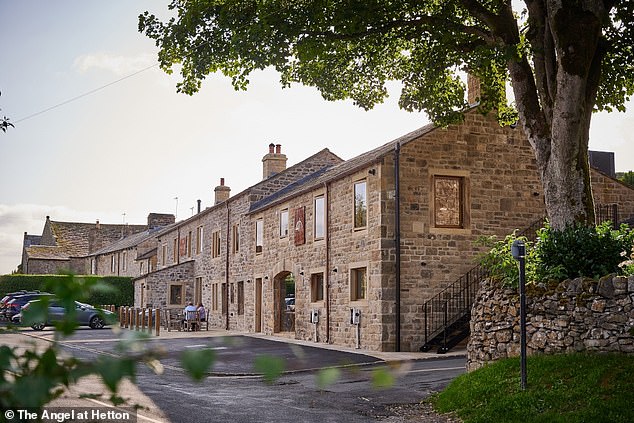 Sixth place goes to The Angel at Hetton, a Michelin-starred eatery run by chef Michael Wignall 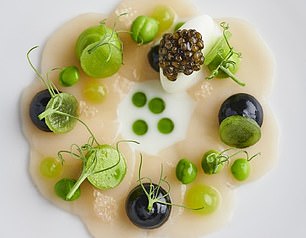 The Angel at Hetton’s menu is described as ‘glorious’

Run by chef Michael Wignall, this Yorkshire gastropub ‘offers pub food reimagined in a cosy environment that looks out across stunning landscapes’.

A testament to its quality, it has earned one Michelin star to date.

The judges declare: ‘High on the venue’s list of priorities, as well as delivering top nosh, is providing you, the diner, with the best service in the industry.’

Branding the menu ‘glorious’, the judges note that you might dine on a monkfish main followed by Tahitian vanilla cheesecake with salted granola and roasted beetroot puree. 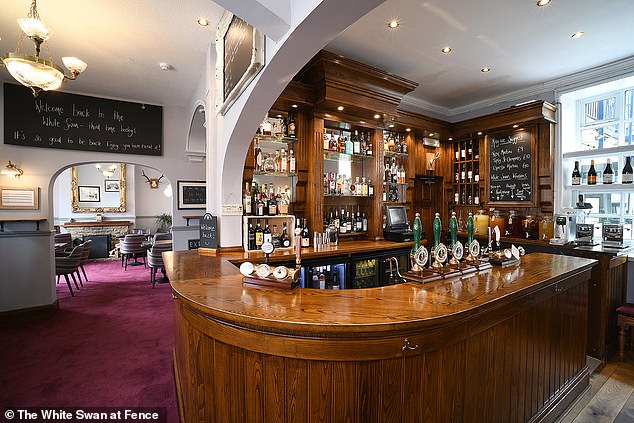 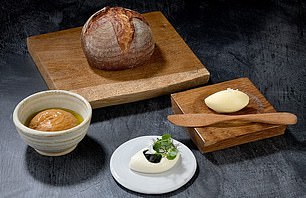 This one-Michelin-starred restaurant ‘looks like a typical village boozer’ from the exterior, the judges reveal, but inside it’s a ‘very special place indeed’.

Billed as a ‘pub like no other’, the eatery has been known to serve dishes such as lobster soup with tarragon and Whitewell partridge with smoked bacon.

Such dishes are the creation of chef Tom Parker, a ‘mischievous genius’ according to the judges.

The judges recommend keeping an eye out for special menus throughout the year – previous highlights have included a sell-out Japanese-themed night, they reveal. 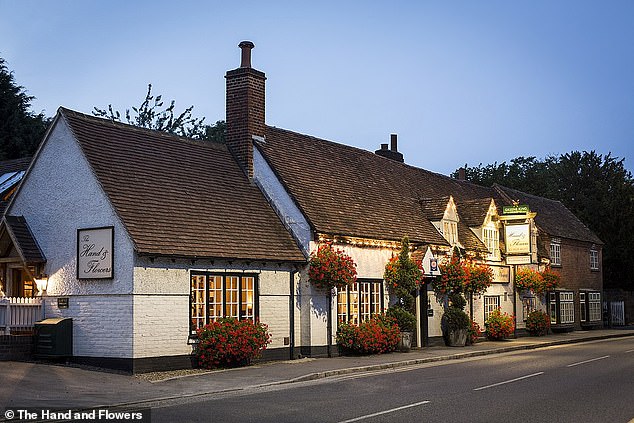 The judges say that The Hand & Flowers, which ranks eighth, is ‘visited by thousands of eager foodies from across the country and world each year’ 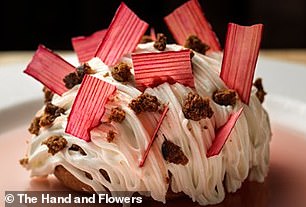 One of the eye-catching dishes at The Hand & Flowers

With a claim to fame as the first pub in the UK to earn two Michelin stars, this renowned Marlow eatery is spearheaded by celebrity chef Tom Kerridge.

The judges reveal: ‘Making every customer feel special as they walk through the pub’s door is the top agenda for the gastropub, along with giving friendly service and exceptional food and drink.’

They list Brittany guinea fowl breast with poultry tart as well as chocolate and ale cake as examples of the dishes that might appear on the gastropub’s menu.

The judges say that the pub is ‘visited by thousands of eager foodies from across the country and world each year’, adding: ‘Guests who don’t want to journey home after visiting The Hand & Flowers can take advantage of the gastropub’s 11 bedrooms, situated in cottages nearby.’ 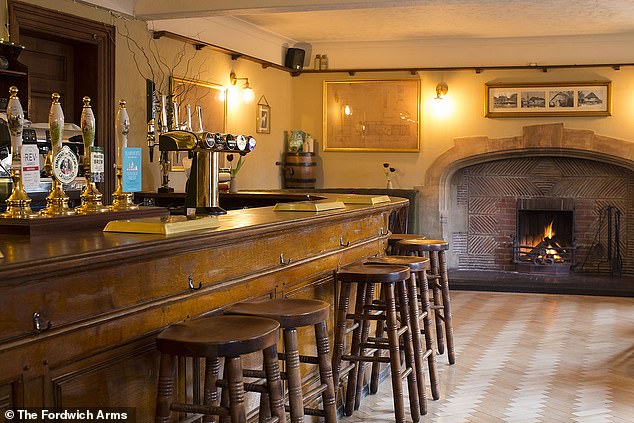 Kent’s The Fordwich Arms, a ‘tastefully decorated’ pub that looks out over the River Stour, snaps up ninth place 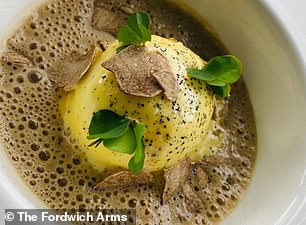 Nestled in Britain’s smallest town, Fordwich in Kent, this prize-winning pub is described as ‘one of the loveliest gastropubs in the county’.

With chef-patron Daniel Smith at the helm, dishes are crafted from ‘local Kentish ingredients, which are sourced direct from nearby farms and producers’, the judges reveal.

Diners can choose from a la carte menus, tasting menus and two vegetarian tasting menus, with dishes such as roast saddle of venison with spiced fig emerging from the kitchen.

The setting is another high point – the judges say that the ‘tastefully decorated’ pub, which overlooks the River Stour, is housed in a ‘beautifully renovated building, with its red brick adorned with bright green ivy’. 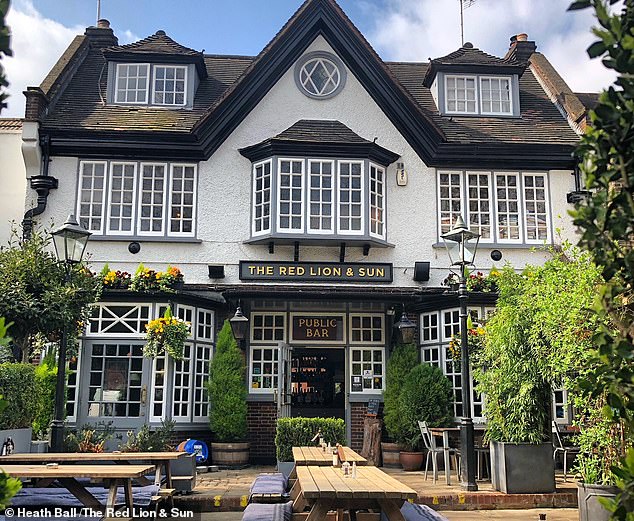 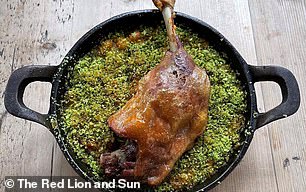 Describing this London pub, the judges say: ‘A pub for all seasons, you can either nestle yourself away near the log burner inside or find a comfy spot to relax in the garden with some seafood and peruse what is widely recognised as one of London’s best wine lists, curated by its wine fanatic owner [Heath Ball].’

The menu is said to offer ‘rustic, modern British pub food’ with carefully sourced ingredients and meats from nearby Highgate Butchers.

The judges warn, however, that spare tables are an ‘endangered species’ on Sundays when the pub serves four different kinds of roast dinners.

THE ESTRELLA DAMM TOP 100 GASTROPUBS 2023 RANKING, FROM LANCASHIRE TO EDINBURGH

6. The Angel at Hetton, Hetton, Yorkshire

27. The Pipe and Glass, Beverley, Yorkshire

29. The Dog at Wingham, Canterbury, Kent

32. The Loch and The Tyne, Old Windsor, Berkshire