How overcrowded is YOUR train? Commuters’ top 10 hellish trips to work are revealed – with the 8.02am from Oxford to London Marylebone topping the list

The 8.02am train from Oxford to London Marylebone was the most overcrowded in England and Wales last autumn, as new figures reveal the top ten most pack trains.

There were nearly twice as many standard class passengers as the registered capacity when the two-carriage Chiltern Railways service arrived in London on a weekday, giving it a load factor of 196 per cent.

The Department for Transport (DfT), which published the data, said constraints on the number of available carriages limited the operator’s ability to cope with rising demand.

The 8.02am train from Oxford to London Marylebone was the most overcrowded in England and Wales last autumn, as new figures reveal the top ten most pack trains 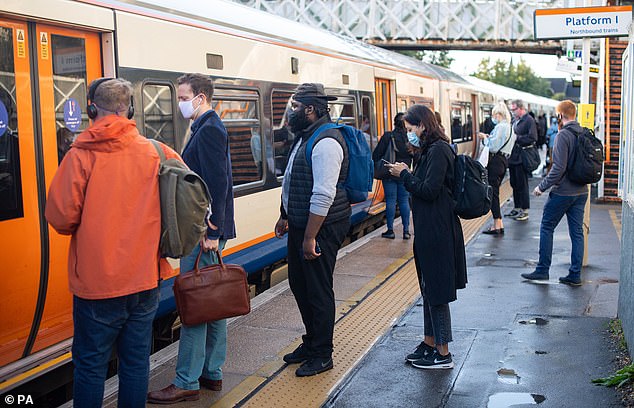 Commuters board a London Overground train today. The 7.38am Enfield Town to London Liverpool Street train was the third most packed in England and Wales this time last year

The 7.32am South Western Railway train from Woking to London Waterloo was the second most overcrowded train, with a load factor of 182 per cent when it reached its destination.

Load factor refers to the number of passengers as a percentage of the maximum capacity at the busiest point in a journey.

Other services in the top 10 most packed trains include the 3.08pm Great Western Railway train from Weymouth to Gloucester, which has a load factor of 178 per cent.

The DfT stated that the 10 most overcrowded trains represent ‘a small fraction of all services’ and some of the figures are based on a single count.

Some 16.4 per cent of passengers were standing on trains serving major cities in the morning and evening peaks.

The collapse in demand for rail travel due earlier in the coronavirus pandemic is not reflected in the latest figures.

Passengers have started to use tubes and trains again, however, which were packed today as commuters continue to head into the office in their droves – 36 hours after Boris Johnson told Britons to get back to working from home.

Thousands of passengers boarded public transport to get back to desks for the second consecutive morning since the Prime Minister’s national address on Tuesday night.

Rolling out a new wave of restrictions and changes, Mr Johnson said those who were able to work from home should now go back to doing so, even though he has led a hard campaign of encouraging people back into towns and cities to save firms which have been put under threat during the pandemic.

Traffic data showed little change in the number of cars on roads in Britain’s major cities.

Transport for London said 771,000 passengers used the London Underground network from the start of service until 10am – only a 2.3 per cent decrease on the same period last week, and just 32 per cent of normal demand.

Earlier in July, phone data revealed only a handful of workers were commuting into the UK’s mostly-deserted big cities.

The data showed that Edinburgh was the city which saw the least workers return to its streets with just 12 per cent footfall when compared to pre-lockdown levels.

Only one in eight workers in London has returned to the office in July, compared to nearly 50 per cent in Basildon, Essex.

Research by the Centre for Cities think tank shows the majority of office workers across the country had been unwilling to return at the time.