The list of most held stocks on eToro among UK investors continues to be dominated by tech firms, despite the recent market sell-off, with Tesla, Amazon and Chinese electric vehicle maker Nio making up the top three.

Apple, Microsoft and Meta also feature further down the list.

What are you buying? eToro has unveiled the biggest risers and fallers in its latest stock data

The biggest riser quarter-on-quarter was Twitter, which saw a 217 per cent rise in UK holders.

Shell and BP also saw ‘significant increases’ in popularity on the group’s platform, amid a global surge in gas and oil prices, with the number of UK-based eToro investors holding these stocks rising 44 per cent and 34 per cent, respectively.

Holdings in companies like Aviva, Volkswagen AG, Unilever, Persimmon, Legal & General and JP Morgan Chase & Co are also on the up, according to the data.

Tesla, Amazon, Nio, Apple and GameStop were also the top five most widely held stocks by UK investors during the period.

On top of vaccine makers, eToro’s customers have been offloading shares in airlines, many of which are struggling amid dire staff shortages, cancellations and the inability to meet surging consumer demand. 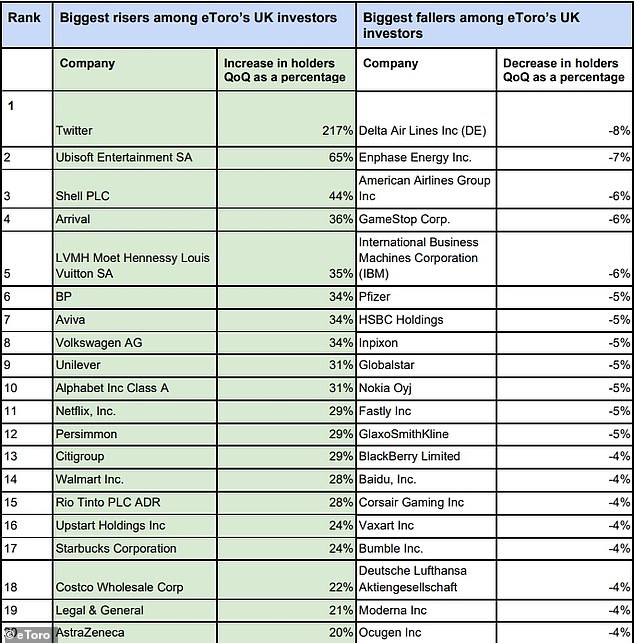 Shifts: The biggest risers and fallers among eToro’s UK investors in the latest quarter-on-quarter findings

The number of holders with shares in Enphase Energy, HSBC, GameStop, GlaxoSmithKline and Bumble also fell.

‘They’ve repositioned for high-for-longer oil prices, and were not afraid to take sides in one of the biggest proposed takeovers of the quarter.

‘They have also scoured the world for investment opportunities, from the US to France, but have not forgotten the UK, which accounts for several of the largest increases in stock holdings. This has been a smart move. Despite the “stagflationary” economic backdrop, the FTSE 100 has been the best performing major equity market this year.’

Laidler added: ‘Investors in the UK have also taken the long view and held onto their “big tech” favourites even as many have been battered in the stock markets this year. This may ultimately be rewarded as they are still growing strongly, with high profit margins, and have fortress balance sheets.’

eToro’s investor sentiment snapshot stemmed from data taken from the platform on 1 July. When compiling the ‘biggest risers and fallers’, only the top 200 companies by market cap were considered. The data used refereed to activity in funded accounts of UK and global eToro users.

Stock selections: A table showing the most held stocks among UK and global eToro investors

How should investors deal with market volatility?

Stock market volatility is rampant at present, leaving investors battling to determine where they should place heir hard-earned money.

Jason Hollands, managing director of Bestinvest, has warned that investors are, for the time being, unlikely to get a yield that keeps pace with inflation.

Hollands said: ‘There is a great deal of uncertainty about how profits might be affected by the slowdown.

‘Earnings have been very healthy in the last reporting season and forecasts are still good for this year, but are they factoring in an economic slowdown?’

Hollands suggests investors seek security, income payments that look repeatable, and shares or funds where the prospects for increased dividend growth are good.

He adds that, at a time when finances are squeezed by rising fuel and food bills, investors might feel tempted to withdraw more from their investments

‘That is a risky thing to do. You are potentially cutting into the bone of your investments, draining capital from your portfolio when valuations are likely to be down quite significantly, to finance current expenditure’, Hollands said.

Hollands said in another post: ‘To say it has been a very challenging first half for households, savers and investors is an understatement. Household budgets have been squeezed by soaring prices, borrowing costs are rising and – in the UK – we have also had to contend with a higher tax burden by stealth as frozen personal allowances bite.

‘In this environment, savers have seen the real value of cash deposits eroded at rapid pace by inflation and investors have endured sharp declines in both equity and bond markets. The markets have also seen big shifts in exchange rates, extreme movements in commodity prices and collapsing values of speculative asset classes e.g., cryptocurrencies.’

Kyle Caldwell, collectives specialist at Interactive Investor, said: ‘As market volatility continues and inflation continues to bite, private investors are on the hunt for income once again.’

He added: ‘While far from guaranteed, the prospect of a company paying a dividend gives investors greater confidence in terms of its valuation versus firms that are reinvesting cash back into businesses for future growth.’

‘The conflict in Ukraine as well as severe Covid-related lockdowns in China have intensified inflationary headwinds and added significant uncertainty to the outlook at both the macro and micro level.

‘However, the recent sell-off in some parts of the UK market has been sharp and indiscriminate.

‘While the near-term economic outlook looks challenging as central banks seek to tackle inflation and recession risk, a downturn is already priced in.

‘We believe sentiment has recently become overly pessimistic. Cyclicals and mid/small caps, for example, have significantly de-rated reflecting excessively negative outlooks, which is presenting us with attractive opportunities.’