EXPRESS INFORMER > News & Politics > Toots Hibbert dies aged 77: Reggae legend passes away with his family by his side in Jamaica

The Toots and the Maytals frontman’s band released a statement on Saturday revealing he had passed away at the University Hospital of the West Indies in Kingston, Jamaica, surrounded by his family.

Taking to Twitter, the group penned: ‘It is with the heaviest of hearts to announce that Frederick Nathaniel ”Toots” Hibbert passed away peacefully tonight, surrounded by his family at the University Hospital of the West Indies in Kingston, Jamaica…’

Tragic: Reggae legend, Toots Hibbert, has died aged 77 at the University Hospital of the West Indies in Kingston, Jamaica, surrounded by his family and friends (pictured in 2019)

The statement added: ‘The family and his management team would like to thank the medical teams and professionals for their care and diligence, and ask that you respect their privacy during their time of grief.

‘Mr Hibbert is survived by his wife of 39 years, Miss D, and his seven of eight children.’

Hibbert’s cause of death is not known but earlier this month he was put in intensive care and tested for coronavirus, though his results are unknown.

Lenny Henry led the celebrity tributes as he emotionally penned: ‘Rest in power… ‘ 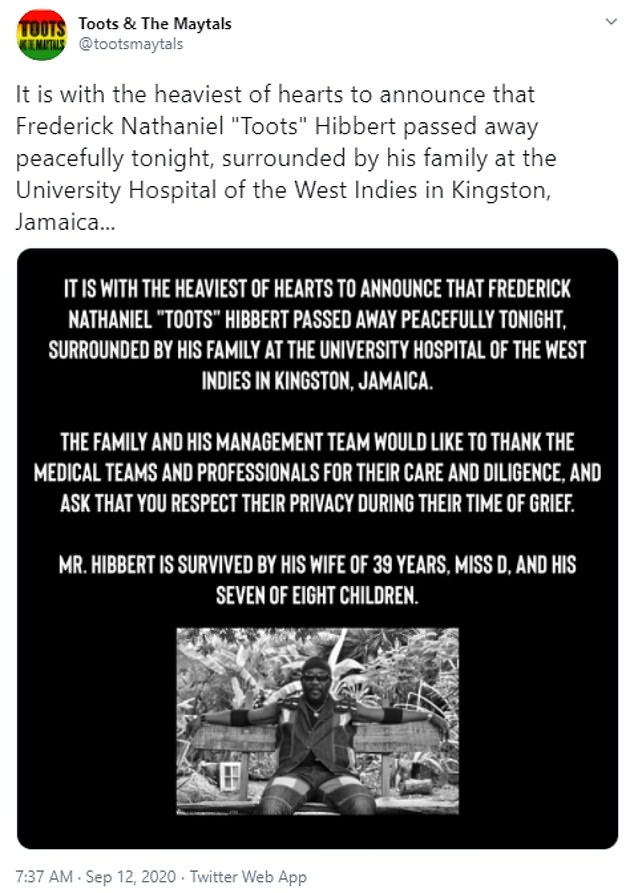 Sad: The Toots and the Maytals frontman’s band released a statement on Saturday revealing he had passed away at the University Hospital of the West Indies in Kingston, Jamaica, surrounded by his family

He added: ‘So sorry to hear of Toots Hibbert’s death. His music was a constant in our house growing up via Tighten up albums. His voice was powerful and adaptable to funk, soul, country, AND reggae.’

He penned: ‘The Legendary Toots Hibbert has passed i spoke w/him a few wks ago told him how much i loved him we laughed & shared our mutual respect.

‘He was a father figure to me his spirit is w/us his music fills us w/his energy i will never forget him RIP MIGHTY & POWERFUL NYAH FYAH BALL.’ 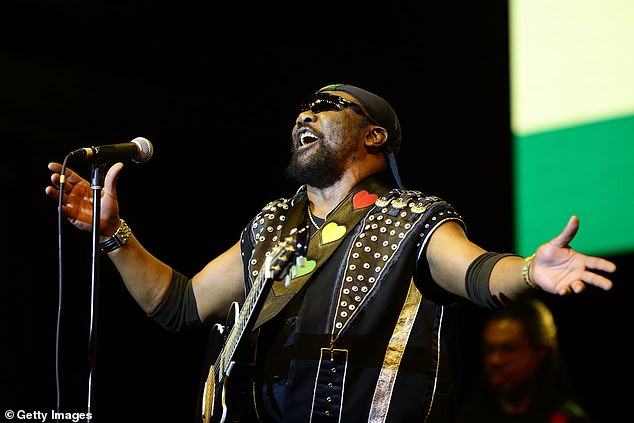 Unknown: Hibbert’s cause of death is not known but earlier this month he was put in intensive care and tested for coronavirus, though his results are unknown (pictured in 2019)

Earlier this month, the musician’s family issued a statement on his condition, telling fans he was ‘showing signs of improvement by the hour’.

They wrote on August 31: ‘While reports of Mr Hibbert being in an intensive care unit at a private facility in the corporate area are true, the family would like to assure those concerned that he is making positive progress and is receiving the best possible treatment, while he awaits the results on his Covid-19 test.

‘He is resting and in good spirits, and is showing signs of improvement by the hour.

‘His family has asked everyone to hold him in their prayers and would like to thank the minister of culture Olivia ‘Babsy’ Grange and minister of health Christopher Tufton for their assistance in getting Mr Hibbert rested, as well as the countless medical professionals who are taking care of Mr Hibbert around the clock during this time.’

In a separate statement posted on September 3, the family wrote: ‘Mr Hibbert’s family would like  to thank everyone for the outpouring of love and prayers during this time.

‘The medical professionals at UHWI – where Mr Hibbert is being taken care of – have confirmed he is in a stable condition and is receiving around the clock treatment to ensure his body can recover. 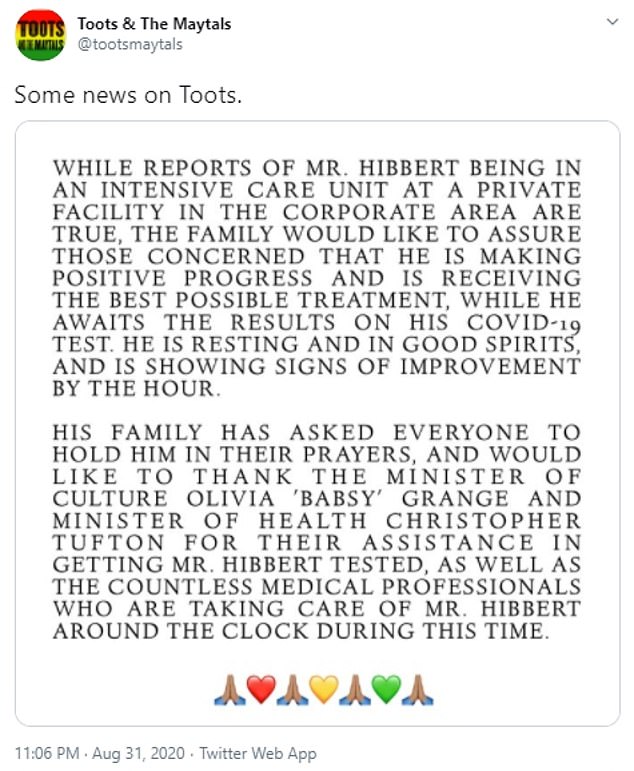 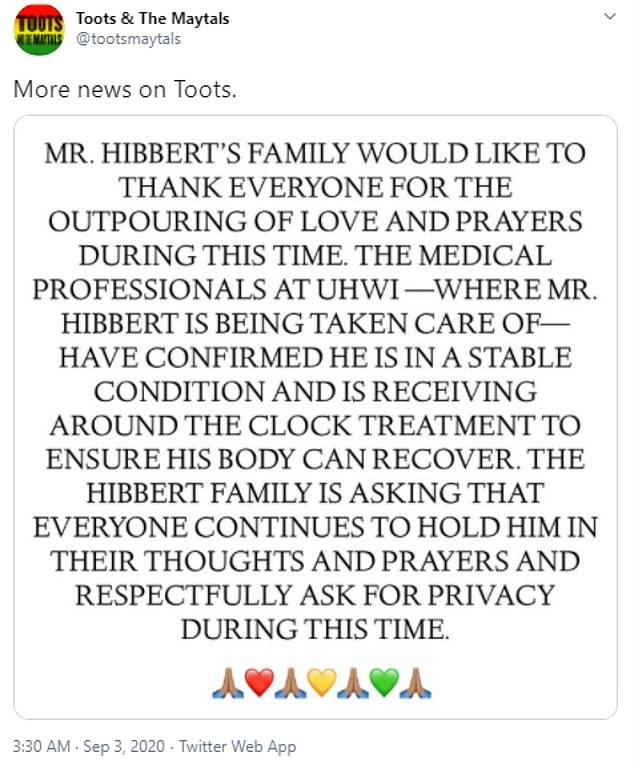 ‘The Hibbert family is asking that everyone continues to hold him in their thoughts and prayers and respectfully ask for privacy during this time.’

It comes just days after the Toots and the Maytals released their first full-length LP and new album Got to Be Tough in ten year.

It included contributions from the likes of Beatles musician Ringo Starr and Ziggy Marley.

Hibbert met Henry ‘Raleigh’ Gordon and Nathaniel ‘Jerry’ in 1962 after he moved to Kingston. The trio formed the band Toots and the Maytals.

They had several successful hits with 1968 song, Do the Reggay, said to have inspired the name for reggae music.

While 1969 track, Pressure Drop, helped launch their career globally after it was used in the 1972 film The Harder They Come.