There are some US exports that we Britons love: Amazon, McDonalds, Starbucks, to name just a few.

But the latest delivery from the land of the stars and stripes might be a super-size order too large for us – and our modest roads.

It’s the humongous all-electric Hummer, which looks almost impossible to squeeze into a UK car parking space and costs £320,000.

The first example of the four-tonne GMC pick-up truck has been delivered to a UK dealer, and the images of it driving around London’s streets show that it will dwarf almost every other motor it comes across.

Too big for Britain’s roads? The new Hummer EV is now being offered to UK drivers by a luxury car dealership that specialises in US models. But customers who can afford the £320,000 will struggle to find somewhere to park it…

The first example of the gigantic electric vehicle to land in Britain belongs to high-performance and luxury car dealer Clive Sutton, a London-based specialist when it comes to US models.

It now offers to import the enormous machine to Britain for customers, meaning they will get the same left-hand-drive cars sold across the Atlantic.

The fully-electric truck is said to pair more than 350 miles of zero-emission range with ‘blistering supertruck performance’ – but you’ll need to find somewhere more expansive than the capital’s roads to safely discover how quick it truly is.

The spec sheet says it has 1,000 horsepower and 1,200 foot-pound of torque. That means, in theory, it can accelerate to 60mph from a standstill in just 3.3 seconds.

That’s no mean feat for a vehicle that tips the scales at a colossal 4,103kg. To put it into perspective, that’s almost two Range Rovers. The 212.7kWh battery pack alone weighs 1,326kg, which is heavier than a Ford Fiesta.

Its hulking weight could also be a problem for potential customers under the age of 42, as they might need to pass an additional test just to drive it because their standard driving licence isn’t suitable. 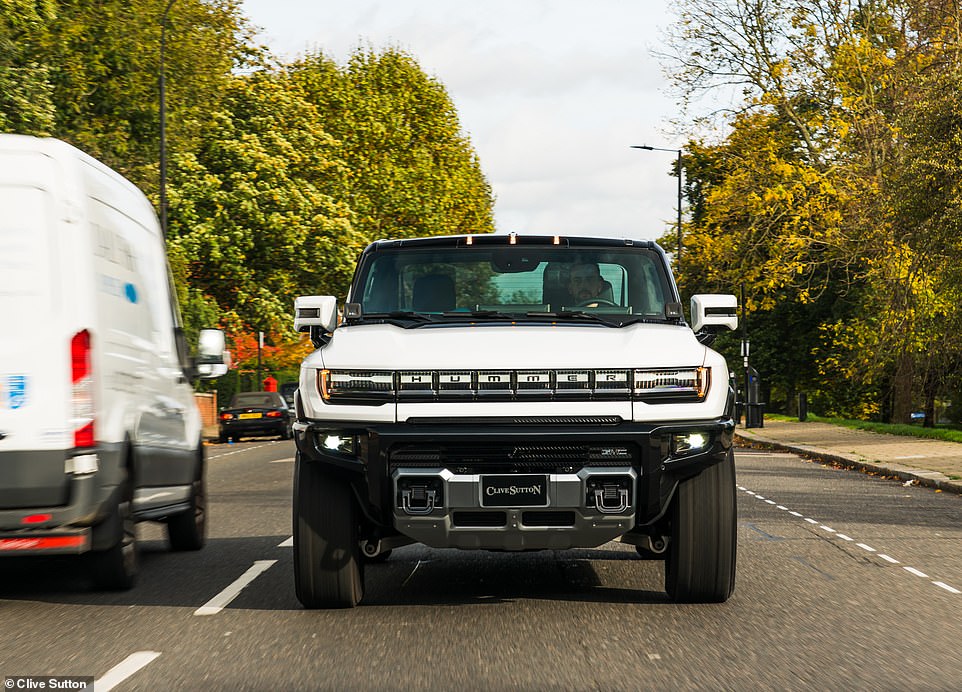 The first example of the hulking electric vehicle to land in Britain belongs to London-based motor dealer Clive Sutton, which specialises in US vehicles

For those who passed their test after January 1997 and have a conventional ‘Category B’ car licence, the legal maximum authorised mass (MAM) of a vehicle is 3.5 tonnes.

Anything above that weight means a conventional licence becomes invalid and a ‘Category C1’ HGV licence is needed. This can only be attained by sitting a separate driving test to prove you have the capacity to operate a vehicle weighing up to 7.5 tonnes.

It isn’t an issue for older motorists who passed their test before January 1997; they have automatic rights – known as ‘grandfather rights’ – to drive vehicles up to 7.5 tonnes as they were granted the C1 entitlement when they passed.

There is also an exception for the driving licence rule if the vehicle is electric and for commercial use, in which a motorist is allowed to get behind the wheel of a motor up to 4.25 tonnes on a Category B licence. The Hummer EV pick-up could therefore qualify using this loophole. 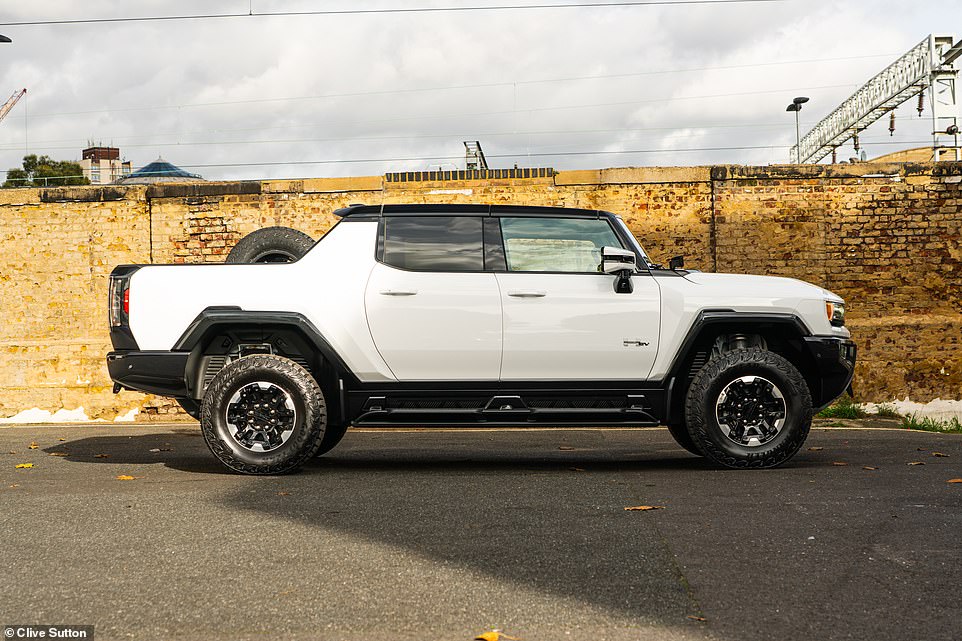 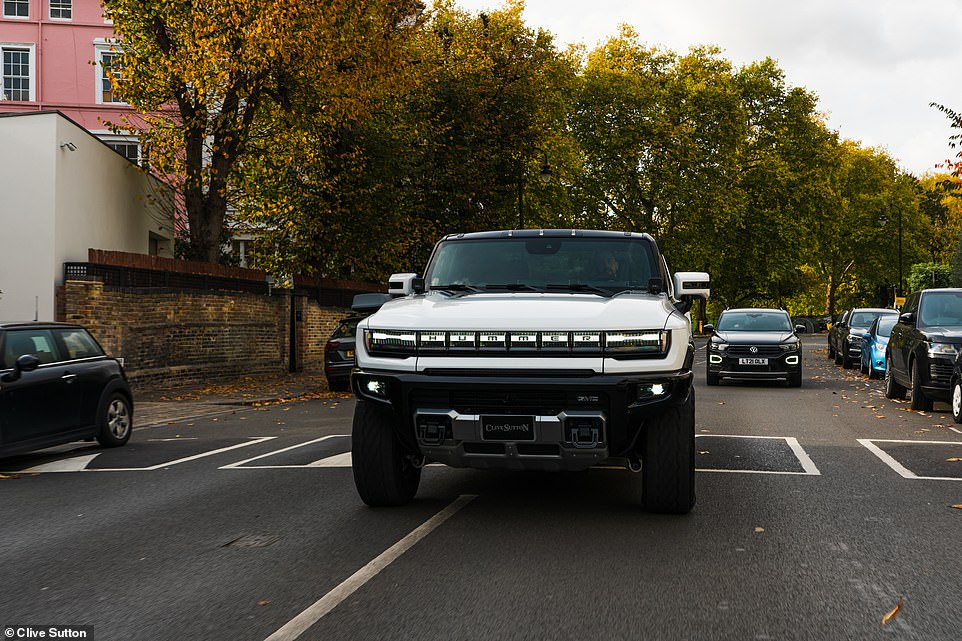 This colossus of a pick-up weighs a massive 4,103kg. To put it into perspective, that’s almost two Range Rovers

Its astounding weight is matched by its domineering stature, as you can tell from the selection of photos of it bounding through the capital.

At 5.5 metres long, 2.0 metres high and 2.34 metres wide, it even casts a shadow over Rolls-Royce’s supremely luxurious Cullinan SUV limo, which is one of the biggest motors you can buy in Britain today.

Given that the minimum – and most common – UK parking bay is just 2.4 metres by 4.8 metres, this isn’t a motor you’ll want to take into a multi-storey car park. 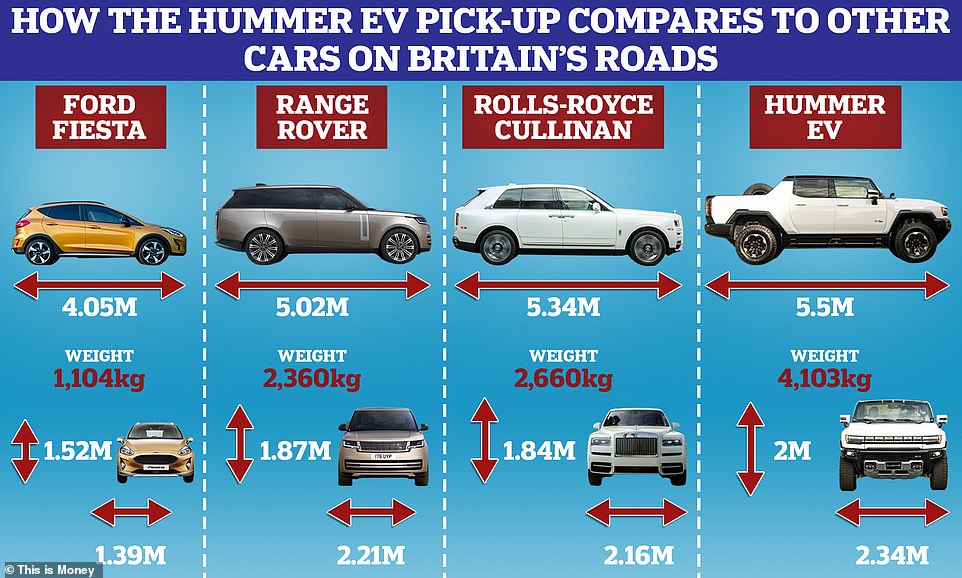 How does the Hummer EV compare to other cars on Britain’s roads? It will eclipse and Range Rover and even a Rolls-Royce Cullinan, both of which are extremely large SUVs 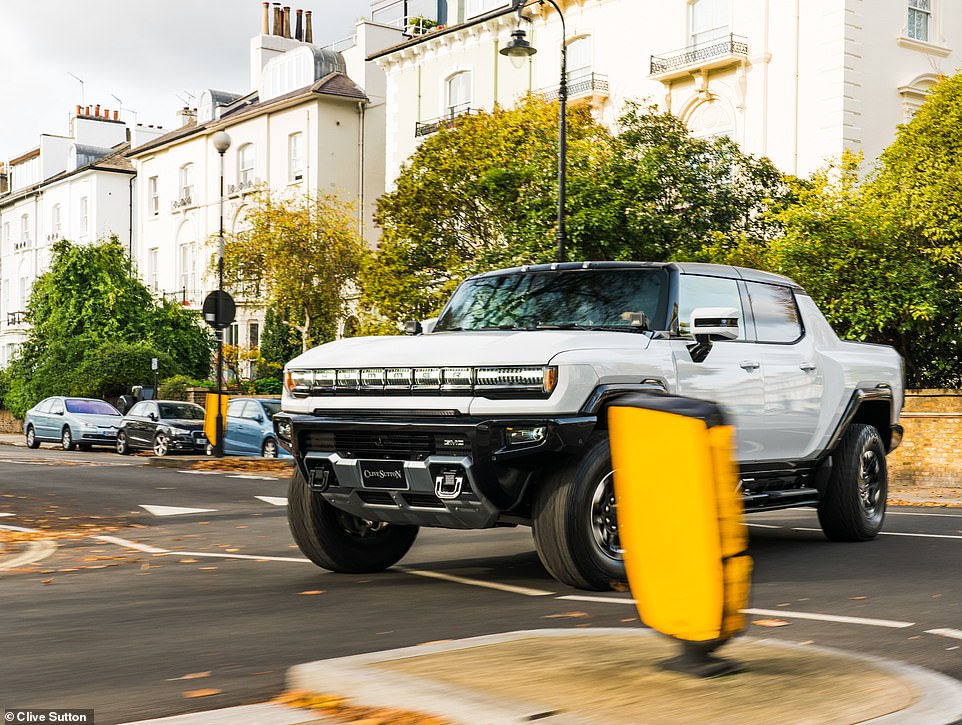 The spec sheet says it has 1,000 horsepower and 1,200 foot-pound of torque. That means, in theory, it can accelerate to 60mph from a standstill in just 3.3 seconds 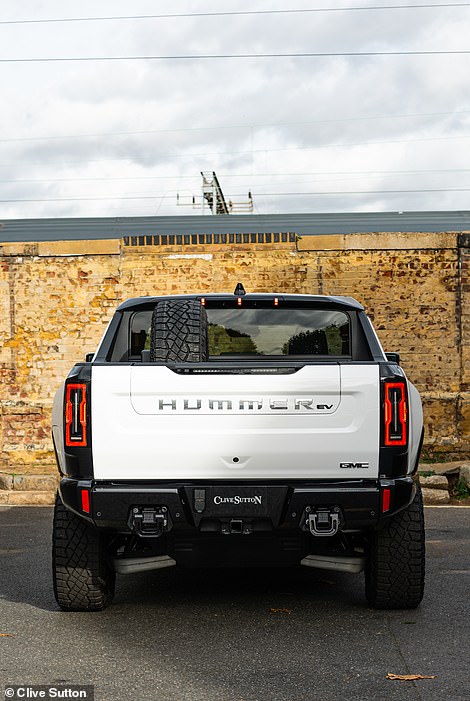 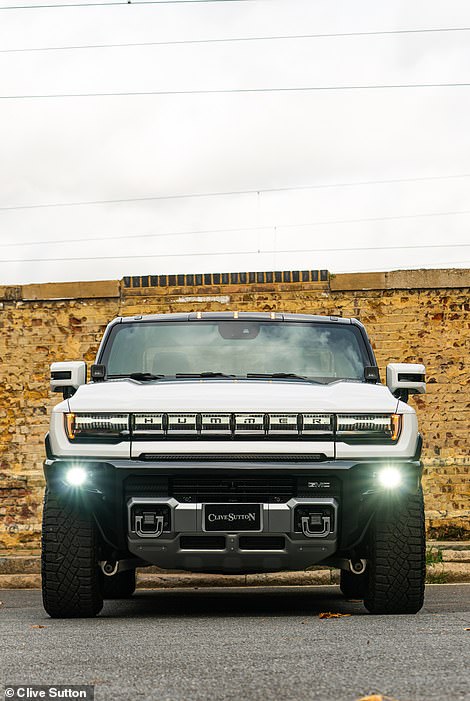 The Hummer EV is 2.0 metres tall, 5.5 metres long and 2.34 metres wide. Given that the minimum – and most common – UK parking bay is just 2.4 metres by 4.8 metres, this isn’t a motor you’ll want to take into a multi-storey car park 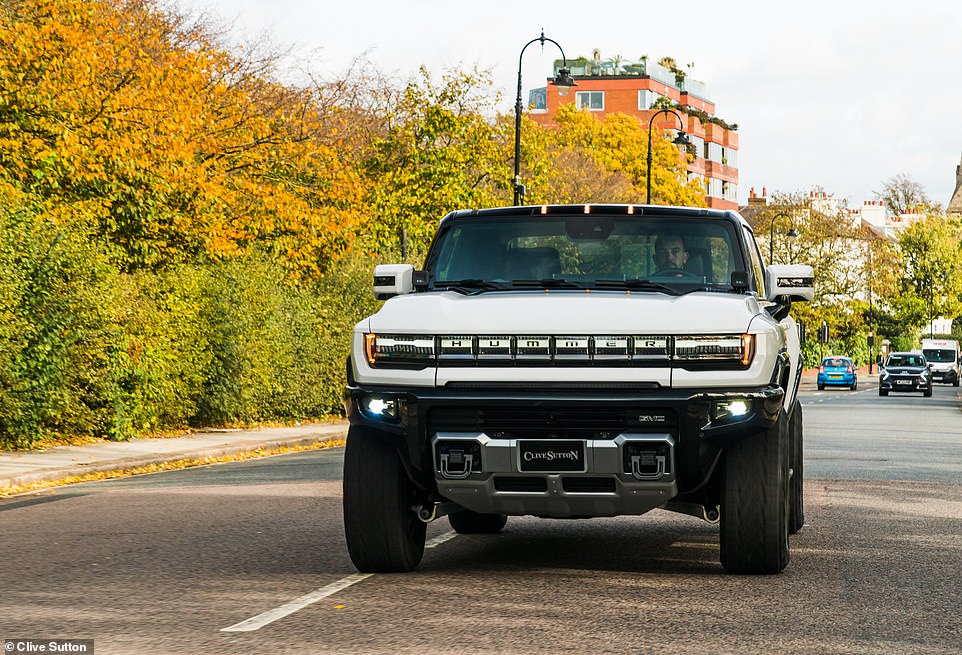 Despite its scale-busting weight and sizeable dimensions, GMC says it will be an incredible off-roader – not that we can imagine many British farmers wanting one for herding cattle.

The Hummer has an optional ‘Extract’ mode, which allows the entire truck to raise by another 15cm or drop lower when travelling at motorway speeds to make the four-tonne lump as aerodynamic as physics can possibly allow.

While it certainly looks too big for Britain’s roads, there is – apparently – some appetite for the vehicle, according to Clive Sutton.

The founder and CEO of the luxury dealership said: ‘As soon as the GMC Hummer EV was announced our customers have been desperate to see the model in the UK!

‘Now that we have imported the first one, we anticipate orders outstripping supply as buyers clamour to be among the first in Europe to own this electric supertruck.’ 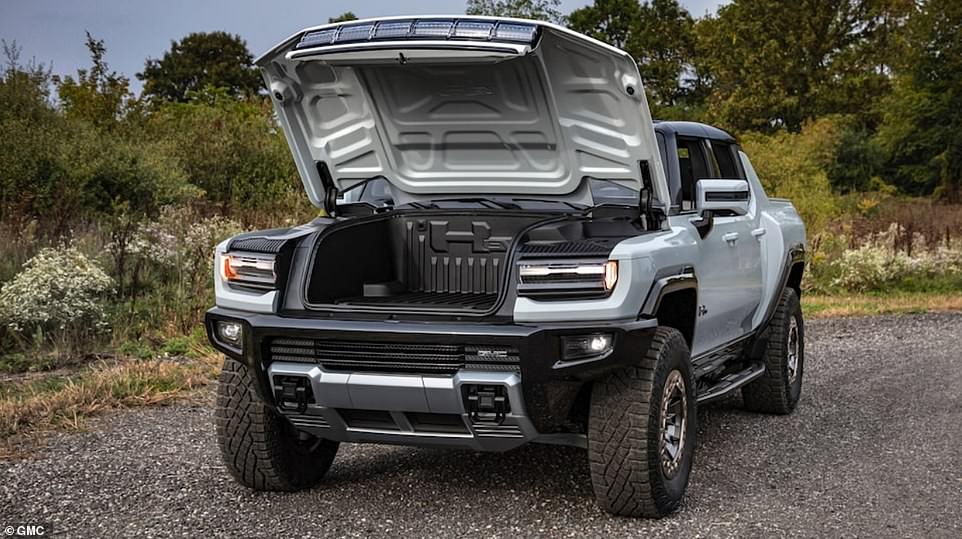 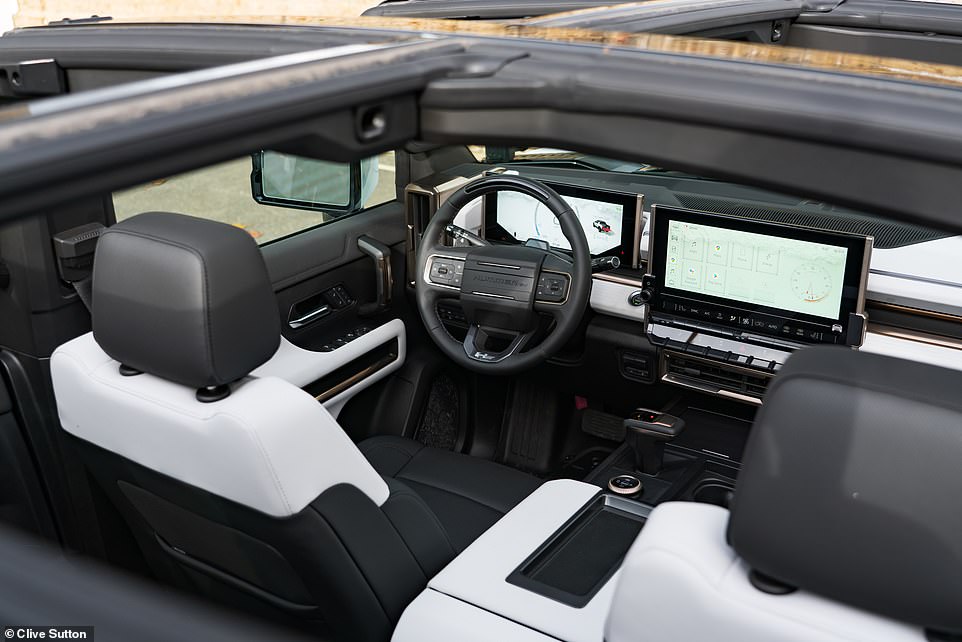 London dealer, Clive Sutton, offers to import the enormous machine to Britain for customers, meaning they will get the same left-hand-drive cars sold across the Atlantic 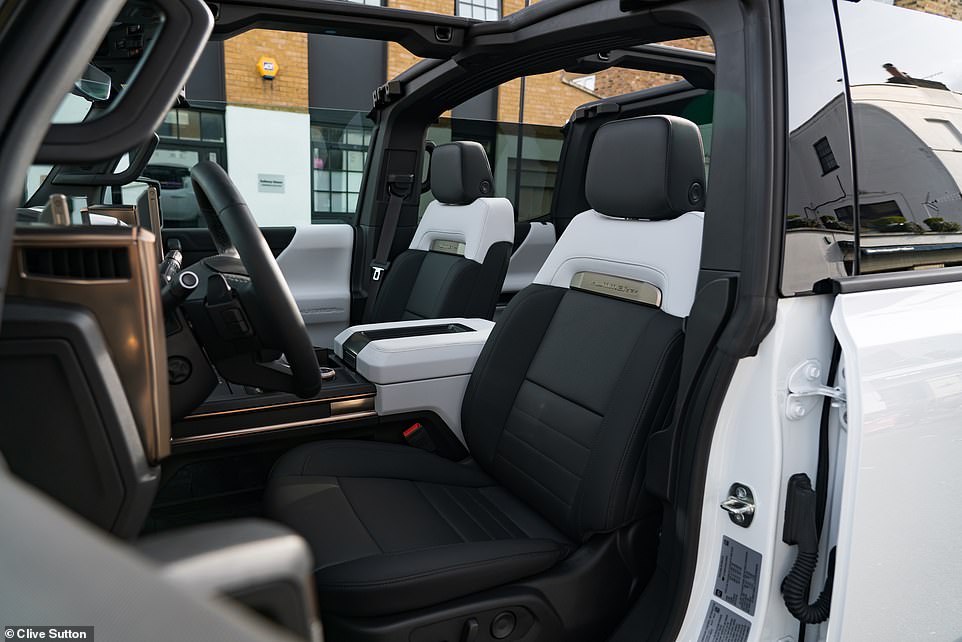 The Hummer EV is also available as a traditional SUV, but the ‘Edition 1’ example Clive Sutton has in the UK is the pick-up version

Other features to note include independent front and rear suspension, full underbody armour and an optional ‘Ultravision’ system, which utilises 18 cameras to provide every possible viewpoint, enabling drivers to navigation around obstacles – and to attempt to park in Tesco.

The roof panels are also removable and can be stored in the front trunk now that it is no longer occupied by a combustion engine.

It’s far from a high-volume-production car. In fact, reports claim GMC is making just 12 examples per day and has so far delivered around 1,000 examples, mostly in the US. That’s despite an order book of around 80,000 customers. 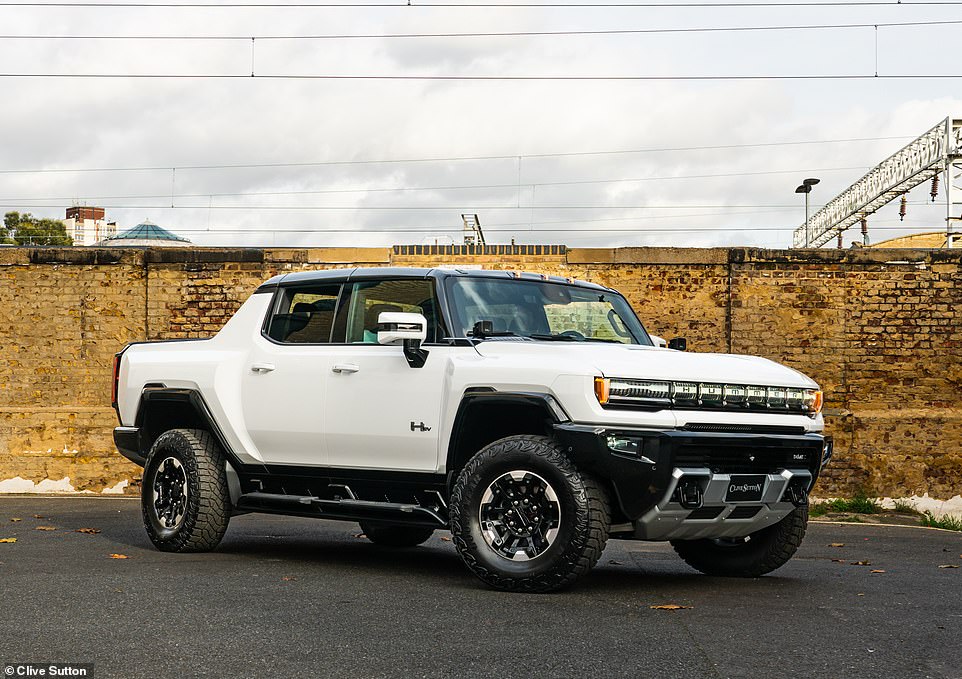 Bosses originally said it will cost from $105,595 when it was first unveiled but US dealers have recently been selling them for twice that due to limited supply and relatively high demand 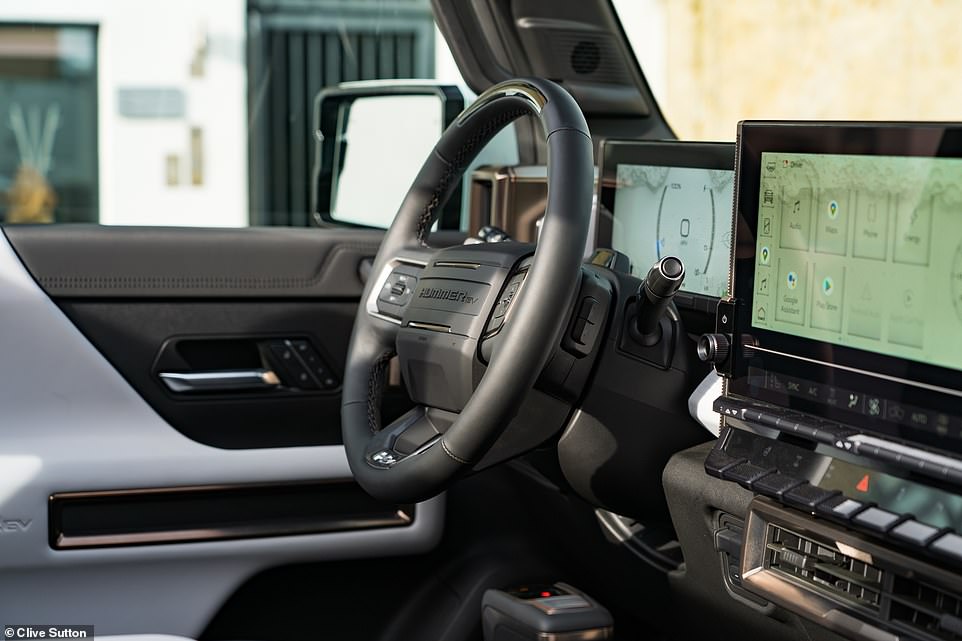 Like the original gas-guzzling Hummers, the electric version is a utilitarian model aimed at well-heeled customers. It has plenty of modern-day features, including large screens for the instrument cluster and infotainment system 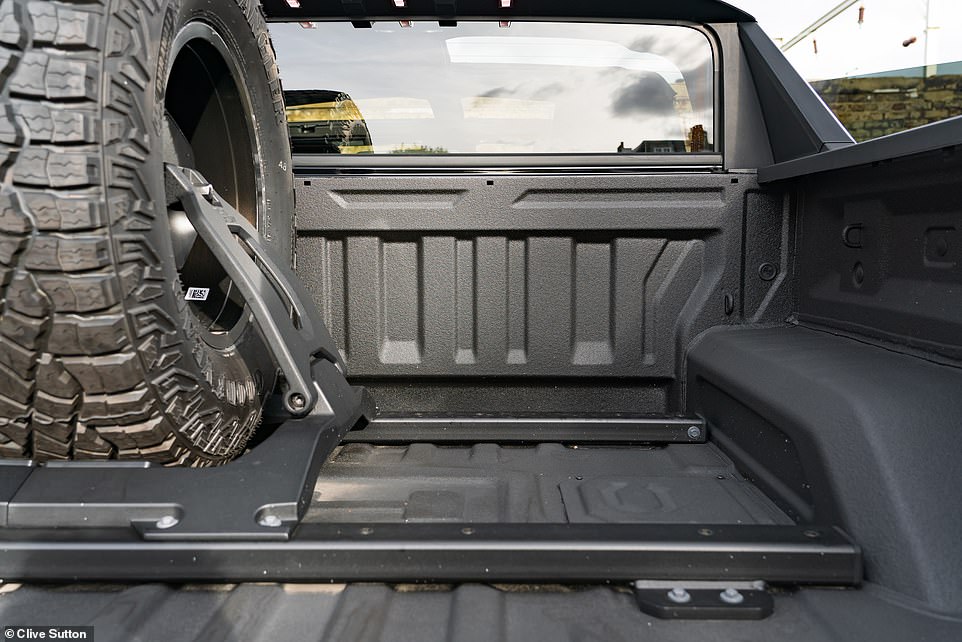 As well as storage space in the front, the rear bed offers loads of carrying capacity – even with a spare wheel mounted inside

Bosses originally said it will cost from $105,595 when it was first unveiled, but because US retailers are not constrained by the ‘Manufacturer’s Suggested Retail Price’ (MSRP), this pick-up version currently sells for more than $200,000 in the domestic market.

And there will be a considerable mark-up for UK customers.

Order one from Clive Sutton and this ‘Edition 1’ model will set you back £320,000, with international shipping, VAT duty, local registration fees, and vehicle conformity testing included in the price.

And that’s if you order one today from the UK luxury dealer, with pricing subject to change based on the US price and current exchange rates.