A.L. writes: I read with interest your article about parking charges in the Cornish village of Mevagissey.

We are going through a similar case with the same company, Premier Parking Solutions Limited, and it is taking my wife to court.

We have since found out through the local papers that the Natural Health premises where she parked in Plymouth, Devon, has been operating as a ‘massage parlour’.

Soothing: But the Natural Health premises in Plymouth were raided last year by police and local officials

Tony Hetherington replies: The letter we published about the Sunny Corner Car Park in Mevagissey came from a reader who told us that a payment machine requesting car registration numbers was not working, but one that accepted cash and gave a payand-display ticket was fine.

He paid and weeks later received a penalty notice from Premier Parking Solutions, which claimed he had breached its terms and conditions by failing to enter his registration number.

If anything, your wife is in an even more dubious situation. The Natural Health shop in Plymouth offers traditional Chinese treatments. Your wife – along with your young son – went there to enquire about acupuncture services, which the shop advertised. She parked in the shop’s small car park at the rear of the premises. You told me that the young woman behind the counter spoke little English and simply gave your wife a leaflet. Your wife immediately returned to her car and left. A week later she received a penalty notice from Premier Parking Solutions, demanding £100, or £60 if she paid promptly.

Among the many dubious aspects to the company’s claim is the car park signage. When your wife parked there, a small sign fixed to a back wall said: ‘Parking only for Natural Health visitors and pre-authorised vehicles’. Well, that seems clear enough. Not clear enough for Premier Parking Solutions, though. When your wife appealed against the penalty, she was told she should have obtained authorisation from her ‘host’, or phoned the car park company itself for permission. What host? The receptionist in the shop who barely spoke English? And the sign itself did not say to call the company.

Since then, signs at the back of the shop have sprouted like mushrooms. One says: ‘Please ensure you authorise your vehicle to park via your host.’ Of course, a customer just popping into a shop does not have a host. But Natural Health is more than just a shop.

Its online advertising is headed ‘Asian Massage Plymouth’ and offers ‘discreet private premises, secure, private parking available’. It promises ‘young and attentive professional therapists’ who will provide, ‘an amazing experience, relaxing every inch of your body’. Police and local authority officials are well aware of Natural Health and last year they even raided the shop and made arrests as part of an investigation into suspected prostitution and modern-day slavery, though no charges were brought.

When Premier Parking Solutions refused to withdraw the penalty, you carried out your own enquiries. You went to the shop and a Chinese woman immediately offered you a massage, as if that could be the only reason you were there. You declined, but did ask whether the shop had a car park. The woman said you were welcome to park at the rear of the shop – but there was no mention of getting any ‘host’ to authenticate this, and no request for your vehicle registration.

I do wonder how much money Premier Parking Solutions has made from men who parked behind the shop and were too embarrassed to appeal against the penalty demand when it arrived later. 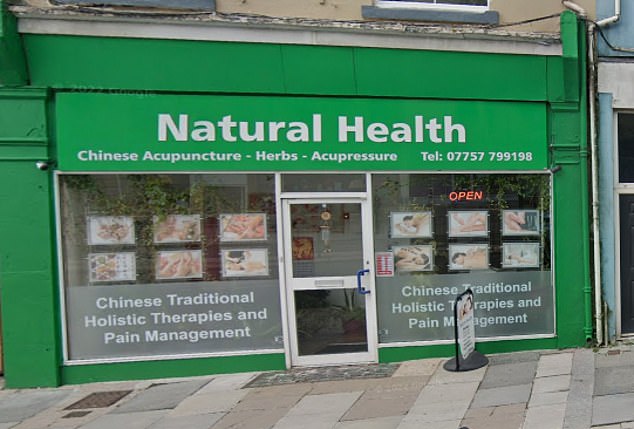 You and your wife appealed to the company itself and to the so-called independent appeals scheme. The scheme’s adjudicator sided with the company, on the basic grounds that your wife did park there, did not establish who or what her ‘host’ was, and so did not have permission as defined by Premier Parking Solutions. Yet parking firms hold this scheme up as evidence of fair play. I invited Richard Cox, the director of the car park company, to comment on the poor wording of the original sign, which seems to have been acknowledged by the brand new signs that have sprung up. I also drew his attention to the nature of the business.

He refused to comment except to send me a copy of the adjudicator’s decision. His solicitors tried to sue your wife by post, but you and she quite rightly want your day in court. The case has been listed for hearing at the end of next month.

Meanwhile, is it too much to hope that the new Prime Minister – whoever it is – will resurrect the Private Parking Code of Practice?

The Government launched this last February with the announcement: ‘Private firms issue roughly 22,000 parking tickets every day, often adopting a labyrinthine system of misleading and confusing signage, opaque appeals services, aggressive debt collection and unreasonable fees designed to extort money from motorists. Apart from their inherent unfairness, these practices damage our high streets, our towns and our city centres. We are determined to bring them to an end.’

The bravery evaporated though, and in June, the Government said: ‘Private Parking Code of Practice is temporarily withdrawn pending review of the levels of private parking charges and additional fees.’

And this leaves every driver still open to exactly the abuses the Government listed last February.

Kingsway SLG Limited, the Liverpool company that was supposed to convert a large city centre office block into apartments, has collapsed.

As I reported two weeks ago, it issued demands through its lawyers that a reader who put down a £26,000 deposit should now pay the balance of more than £184,000 for her apartment.

My investigation in the city, and enquiries with the help of the city council, showed that there were serious breaches of planning permission. The building was unfinished and could not be occupied. The company, which is headed by controversial local businessman Lawrence Kenwright, is now in the hands of Georgina Eason and Mike Sanders, both of accountants MacIntyre Hudson.

They have been appointed receivers following action by Gloucester finance firm Lyell Trading Limited, which held a mortgage over Kingsway SLG’s assets.

Apartment buyers who have already paid for their property, and those who have handed over deposits, now face huge uncertainty. Repeated requests to the receivers for information and advice have not been answered, and the partly converted building is locked and sealed.