Wouldn’t you know it? You spend years planning your retirement, ticking the boxes on savings, investments and pensions, then along comes the world to put you in your place.

I’d planned my retirement for some time and with my 63rd birthday in March, it seemed the perfect time to collect my final Daily Mail pay cheque.

It made a neat end to one tax year as a self-employed journalist and a clean start to the next as a newly retired grandfather.

Then the world went mad. War broke out in Europe, stock markets have been in turmoil, oil and energy prices rocketed and inflation has soared to levels last seen in the 1980s.

Meanwhile, banks are refusing to pass on full interest rate rises to savers whose nest eggs are being eroded faster than the Norfolk coast.

Economists at EY-Parthenon have suggested that inflation could, in the worst case, hit 15 per cent by the winter.

So where does this leave pensioners, many of whom rely to a greater or lesser extents on savings or fixed incomes?

How inflation hurts your retirement

Inflation is a cancer causing most injury to the old, the poor and the weakest in society. Unlike rail workers, those depending on essential benefits, zero-hour contracts or their savings can’t use strong-arm tactics to demand higher incomes.

Percentages can be pretty confusing, so let’s consider a pack of butter costing £2. With £100 you could buy 50 a year: roughly one a week, which would just about cover Mrs H’s heavily buttered toast.

Even those whose pensions are to some extent protected from inflation by their occupational pensions (my Mail pension increases with inflation by up to 5 per cent a year) see our spending power cut.

With 15 per cent inflation I’d still be down to 42 packets of butter in two years.

But spare a thought for those persuaded to trade their pension savings for a fixed annuity income for life. Their private pension will remain unchanged for ever.

With inflation at 9.4 per cent and forecast to go higher, their spending power could halve in just eight years. That’s more damage inflicted by inflation than in the first 21 years of this century. Inflation danger is why Money Mail consistently warned against fixed income annuity products.

What can retired savers and investors do?

So what can we pensioners do in these uncertain times? Personally, I’ve stuck with the stock market for long-term growth and income with a safety buffer of savings accounts and premium bonds.

I took my tax-free cash from my self-invested pension in the spring and moved the remainder into drawdown — a vehicle that allows me to take a monthly income while leaving my pension invested.

I can adjust my income to get the maximum amount out of my pension at the lowest tax rates. When my state pension kicks in at 66, I will reduce the income I take from my drawdown pension.

The stock market may seem like a mixed blessing right now, but I remain convinced that if you’re to have any hope of beating inflation, it’s the place to be.

With most banks paying at best around 1.8 per cent on the top easy-access savings accounts, the real value of your savings is falling at about 7.6 per cent a year right now. But cash can provide comfort when markets fall.

I’ve adjusted my investment portfolio to increase the income and reduce exposure to areas I feel are too risky right now — mainly technology and emerging markets, replacing them with investments aimed more at value, income and capital preservation. 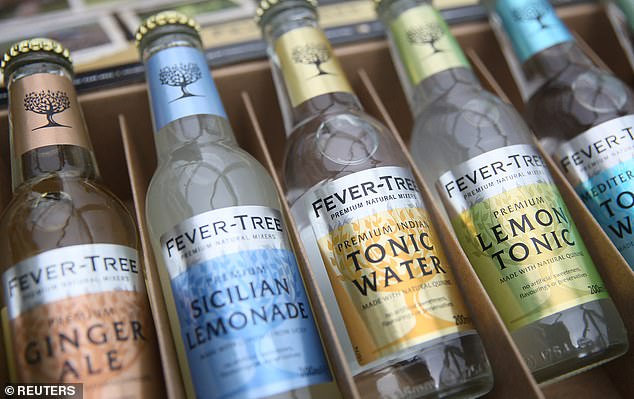 Tony Hazell bought some Fever-Tree shares at £9.21 after the recent steep fall

The investments that I have bought and sold

In their place, I added some others. These include Artemis Income at £5.52 (now £5.41). This is a mainly UK-based trust, paying just over 4  per cent income.

Also, RIT Capital Partners — an investment trust aiming for capital preservation — at £25.67 (now £24.95). And Fidelity Special Situations at £40.40 (now £41.26), a fund which focuses on companies the manager believes are under-valued and under-appreciated by the market.

My other recent dip into the market was to pick up some Fever-Tree shares at £9.21 after the recent steep fall. That felt like an opportunity too good to miss — Mrs H still insists on Fever-Tree with her gin.

My recent portfolio analysis tells me I have more than a third of my money in the U.S., which is where I want it to be. That’s fallen a trifle from last year.

My UK exposure is a little over a quarter, the rest of Europe 16 per cent and China has halved to around 3 per cent. I’ve cut my exposure to emerging markets, too.

I remain committed to the stock market, but I know that there are likely to be more rough times on the near horizon.

As the Moody Blues once told us baby boomers, it’s all A Question Of Balance.