Former AFL footballer turned The Project host Tony Armstrong has weighed in on the Australian netball sponsorship drama by taking aim at the nation’s richest person.

Armstrong said he stood with Indigenous netball rising star Donnell Wallam, 28, after she refused to wear an Australian Diamonds uniform with the logo of Gina Rinehart’s company, Hancock Prospecting, on it.

Lang Hancock suggested in 1984 that Indigenous Australians should be sterilised to ‘breed themselves out’ over the following years. 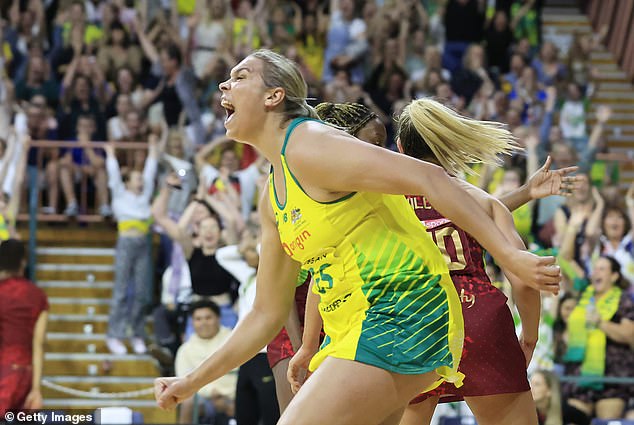 Donnell Wallam, 28, made her stunning Diamonds debut on Wednesday and in the fourth quarter and made an instant impact

Rinehart, worth about $30billion, subsequently tore up her $15million sponsorship offer for the Diamonds based on the stance of Wallam and some of her teammates.

But Wallam had the last laugh when she made a thrilling debut for the team on Wednesday night when she scored the winning goal – after entering from the bench late in the game – in Australia’s 55-54 victory over England.

Speaking on The Project on Thursday night, Armstrong said the media had been too focused on Rinehart’s philanthropic endeavours and were ignoring the deeper issues.

‘The pro-Gina PR push has gone into overdrive with article after article about Gina’s philanthropic niceness,’ he said in a piece-to-camera.

‘$300 million in royalty payments to Indigenous Australians over here, community funds making it rain over there. It’s just money, money, money for the good of blackfellas everywhere.

‘Hancock is a company that last year announced profits of $7.3 billion.’

‘When pro-Gina media shouted that her actions speak louder than words, what they really mean is money talks. Gina throws money at things to win them over.’ 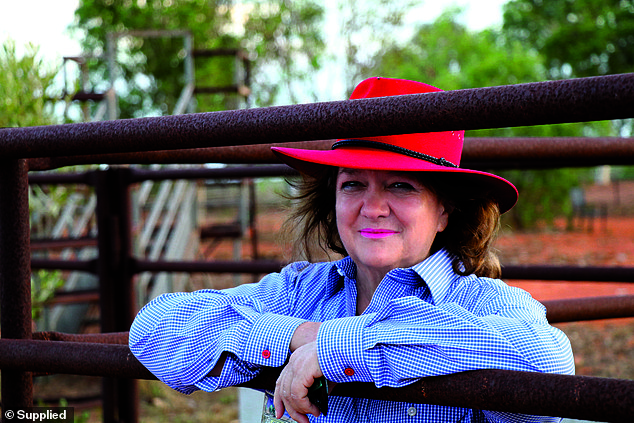 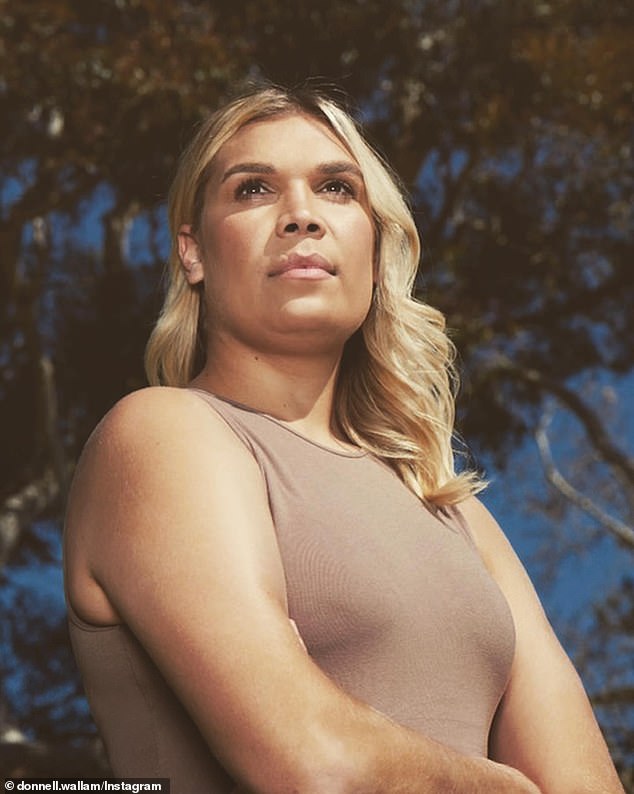 There were some trolls who couldn’t be happy for the netballer after her stunning debut, claiming she almost bankrupted the sport (pictured)

Rinehart has yet to publicly speak out against her father’s comments and Armstrong offered for her to address the controversy herself on The Project.

‘The fact remains that what her dad said while at the helm of Hancock Prospecting is hands down the worst thing anyone could say about another race,’ Armstrong said.

‘Let’s be clear, he was not a senile blow-in who got drunk and shot his mouth off. He was the mining pioneer who started the company.’

‘He was the one who handed the reins to Gina. He believed every one of those words. 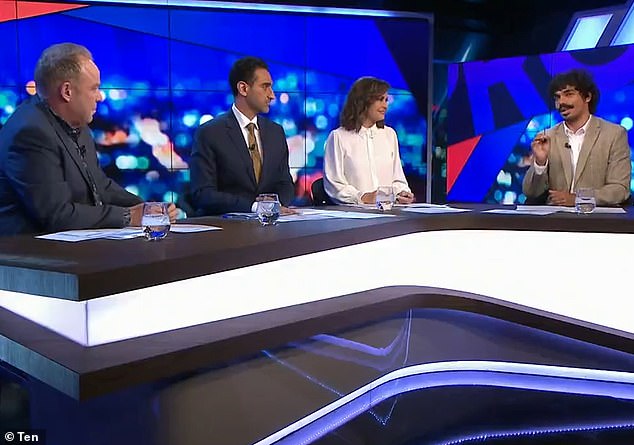 ‘Us blackfellas are big on truth-telling. So in the spirit of reconciliation, Gina, what do you think about your dad’s comments?’

‘We just want to know what you reckon. Send us an email or come join us on the desk. Just let us know, Gina.

‘As Australia’s richest person, your words and opinions matter.’

Armstrong then praised Wallam for her amazing debut for the Diamonds on Wednesday after what she described as one of the ‘toughest weeks of her life’. 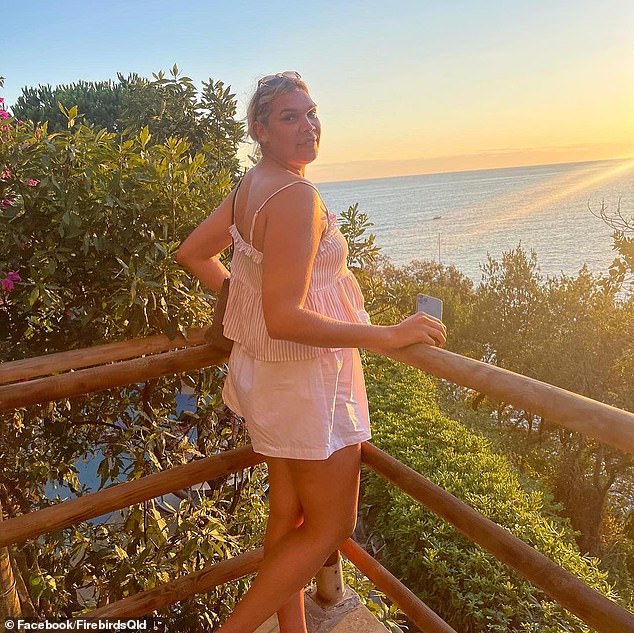 The Project co-host Waleed Aly added that Wallam had not chosen to torpedo the sponsorship deal out of some grandiose political statement but rather had a genuine, personal and ethical problem with donning the uniform.

‘A lot of this has been presented as she tried to tear the whole thing down,’ he added.

‘She didn’t. She had a very understandable problem, she told her teammates about it, they were moved by what she said and then decided they would stand in solidarity.

‘She didn’t say, ‘I’m trying to burn the joint down’ or any of that sort of stuff. I feel like that distinction has been completely lost in this and she’s just at the bottom of something that almost has nothing to do with what she actually did.’ 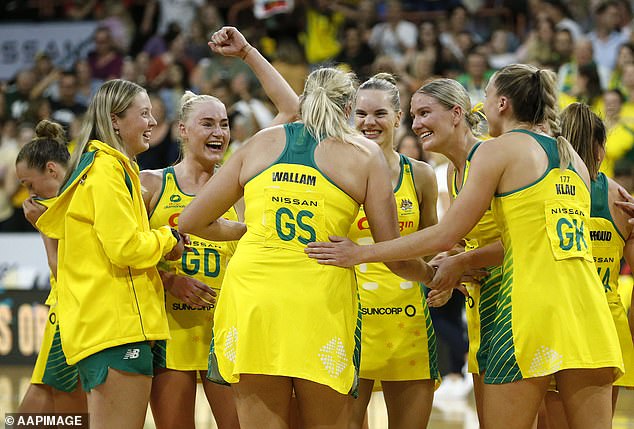 The partnership between Hancock Prospecting and Netball Australia was reportedly worth $3.5million a year until the end of 2025.

Swimming legend Dawn Fraser was the latest spots figure to back Rinehart on Wednesday.

Four-time gold medallist Fraser said she’s worried Mrs Rinehart will now be deterred from sponsoring other sports after vicious public backlash over comments her father made in the 1980s.

‘I don’t think (the players have this story straight) and I don’t know the full story either, but I really cannot understand it, it’s bad for the sport, it’s bad for those girls she said no to,’ she told 4BC.

‘She might stop her sponsorship with other sports now and I’d hate to see that happen to be honest with you.’