Anti-vaxxer demonstrators and some tradies wearing fluoro work vests last week stormed the landmark built to honour those who had either served in war or taken part in peacekeeping missions.

Some rowdier elements urinated on the shrine as hundreds of protesters chanted ‘lest we forget’, appropriating a phrase associated with Anzac Day to protest against mandatory Covid vaccinations on construction sites.

Mr Abbott said the protesters were exercising their right to free speech and likened Victorian police with rubber bullets to storm troopers, despite the demonstrators taking over a sacred site in breach of lockdown rules.

‘Now look, I’m not an anti-vaxxer, although I think that people generally speaking have a right not to be vaccinated if that’s their choice,’ he told told the libertarian Institute of Public Affairs Australia’s Heartland podcast.

‘Obviously, people shouldn’t break the law but you’ve got people there at the Shrine of Remembrance with flags, with placards, to the best of my observation they were simply there to make a point.

‘Then you had the Victorian Police lined up like storm troopers eventually charging them with rubber bullets and tear gas,’ he said.

The former Liberal prime minister suggested elements of the media and the political class had derided the demonstrators as thugs when they were simply exercising their democratic right of expression.

‘Now, I don’t think you can say all the right was on one side there and yet there was near unanimity amongst the chattering classes, that there was a bunch of ‘ deplorables gathered around the Shrine of Remembrance,’ he said. 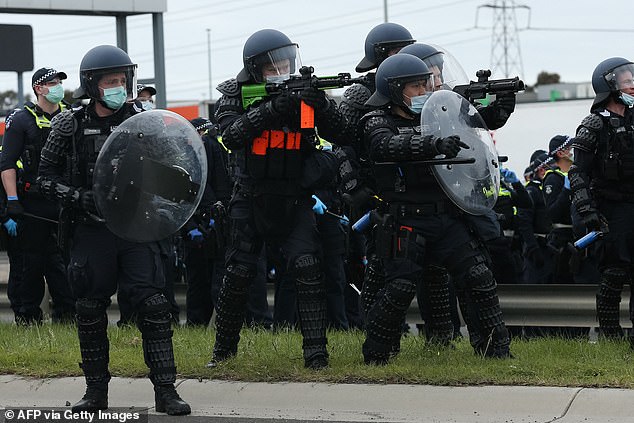 Mr Abbott, a fierce critic of Victorian Premier Daniel Andrews, likened the police standing at the ready with rubber bullets to storm troopers. Riot cops armed with rubber bullets, pepper balls and stinger grenades are pictured at the protest – with ‘new tactics’ to control the crowds

Mr Abbott, a former employment and workplace relations minister, slammed Construction Mining and Energy Union boss John Setka for suggesting the protesters were neo-Nazis and questioned how the protesters could have bought bright shirts during the lockdown to masquerade as tradies.

‘Well, I looked at the footage, and I saw a lot of people in high-vis, which they couldn’t have just gone out and bought because all the damn shops are shut,’ he said.

‘That was a crowd of working people.

‘They were ordinary working people which unions ignore at their peril.’

Mr Abbott was earlier this month fined $500 for failing to beach a face mask at Manly on Sydney’s Northern Beaches.

Ironically, this occurred after he had told the IPA’s Daniel Wild in another podcast ‘snitches’ who dobbed people in over trivial breaches of lockdown rules were like old East German Stasi secret police.

‘If you’re walking down the street and you see someone come out of his house without a mask and you call the police, well, frankly, that’s just Stasi-like behavior,’ he said.

‘Look, if you’re walking down the street and you see a burglary taking place or an assault taking place, it’s only right and proper that you should call the police.’

Victoria Police dispersed the huge crowd from the Shrine in the afternoon of September 22 – firing tear gas and rubber bullets. 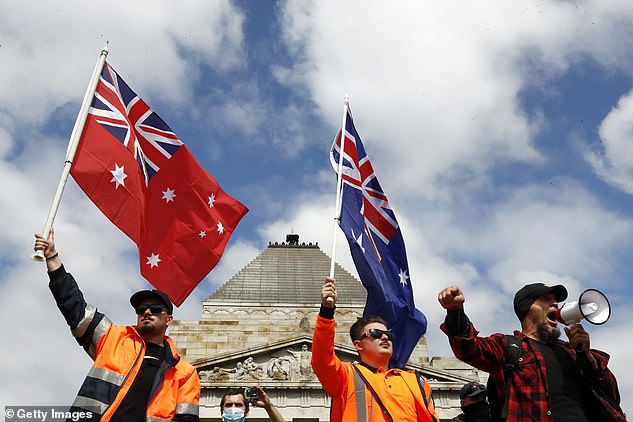 Mr Abbott, a former employment and workplace relations minister, slammed Construction Mining and Energy Union boss John Setka for suggesting the protesters were neo-Nazis and questioned how the protesters could have bought bright shirts during the lockdown to masquerade as tradies 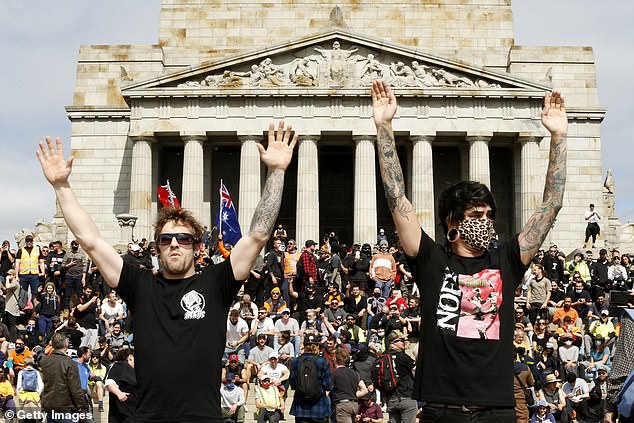 An amnesty was in place on Monday so that a limited number of workers can attend construction sites to shut them down safely.

Violence escalated even further on Tuesday, with 2,000 protesters storming the West Gate Bridge, bringing traffic to a standstill and evening attacking cars