For Trump haters in the U.S. it was some consolation that pretty much every other weekend they could tune into satirical TV series Saturday Night Live and watch Alec Baldwin doing his turn as the president.

The Hollywood star and outspoken Democrat mocked Trump viciously from under a tangerine wig, pouting and gurning like a demented orangutan.

If he can still raise a laugh nowadays, President Trump might find time to savour the current misfortunes of his great tormentor.

For the pugnacious and preposterously self-important actor — who managed to cap his lurid and ugly marriage to Oscar-winner Kim Basinger by leaving an astonishingly nasty phone message to their 11-year-old daughter — is squirming once again.

This time it is his second wife, Hilaria, 36, who has provided the hilarity. She has been forced to deny pretending for years that she was Spanish, presumably to claim some ethnic minority credentials

The 62-year-old star of The Hunt For Red October, Beetlejuice and the TV sitcom 30 Rock — whose ambitions for high office have even extended to the White House — has always run Trump pretty close when it comes to the absurdity of his private life. This time it is his second wife, Hilaria, 36, who has provided the hilarity. She has been forced to deny pretending for years that she was Spanish, presumably to claim some ethnic minority credentials.

So Spanish, in fact, that she once pretended not to know the English for ‘cucumber’. ‘How do you say in English?,’ she asked, Manuel-like, on breakfast TV and often speaks in a Spanish accent.

In fact, she’s not Hilaria but Hillary (Hayward-Thomas) and about as Spanish as anyone else born in Boston whose parents bought a holiday home in Majorca, an island so heaving with expats it’s hardly espagnol anyway.

Of course, she certainly wouldn’t be the first American to over-egg their European ties but nobody has done it with quite such barefaced cheek as the yoga instructor and podcaster, who has borrowed a country with which she has no blood ties whatsoever. Her liberal lion of a husband, who never misses a chance to heap scorn on Trump and conservativism, now has a gruesome ‘cultural appropriation’ scandal of his own to deal with.

Her imposture was first revealed on social media by observers who wondered why, in defending a smug picture she had posted online posing perfectly in her black, lacy underwear with her baby, she did not have the Spanish accent they were used to.

Former classmates at the £46,000-a-year private Massachusetts school she had attended piped up to say that she never had a Spanish accent then, either, and had been a perfectly ordinary entitled American teenager.

Hilaria denied she had misled anyone about her ethnicity, and dug herself deeper by claiming she had always been honest about her Boston roots. She had grown up in Spain and the U.S., she insisted, and occasionally lapses into speaking Spanish because that’s what her family does.

However, her various online CVs — including her page with the speaker agency CAA — all claim she was born in Spain. She told a podcast this year that ‘I moved here [to America] when I was 19 to go to NYU from . . . my family lives in Spain, they live in Majorca’, adding, ‘I knew no pop culture.’

Although the family may have holidayed there, her parents — a successful American doctor and academic respectively — only retired to Majorca in 2011.

As for her husband, it seems difficult to credit that he didn’t know. Baldwin appeared to be in on the charade in a TV interview a few years ago in which he teased his wife’s ‘accent’, explaining ‘my wife is from Spain’.

He was left spluttering incoherently this week in a meandering post on the internet in which he rubbished social media and defended his wife. ‘There are things that have been said recently about the people I love that are ridiculous, just ridiculous . . . consider the source,’ he said.

His daughter, model Ireland, described the outing of Hilaria as ‘sad and pathetic’, but many will agree those are just the adjectives to describe a woman who pretends to be Spanish when she’s not.

And while the Baldwins may be spitting with rage about the injustices of social media, they have long been addicted to it themselves —especially attention-seeking Hilaria.

With wonderful irony, Hilaria Baldwin is now running for the shadows after a career of courting the spotlight at every turn. She was a humble, unknown yoga instructor when Baldwin noticed her at a vegetarian restaurant in Manhattan in 2011 and she winked back at him.

‘He just kept looking at me and I finally walked over to his table. He took my hand and said: “I must know you. I must know you,” ’ she recalled. She said she was confused about his intentions when, after they started going out, he didn’t kiss her for six weeks.

She has relished life in the celebrity world since they married in 2012. She got a job as a lifestyle correspondent on a U.S. showbusiness TV show and just a year after their wedding, she came second behind Kate Middleton in a Vanity Fair list of best-dressed pregnant celebrities. To promote her various yoga and keep fit DVDs, she has posted endless pictures of herself on social media, often in raunchy yoga poses at unusual locations —once even with her leg wrapped around a male companion’s neck at a restaurant table. 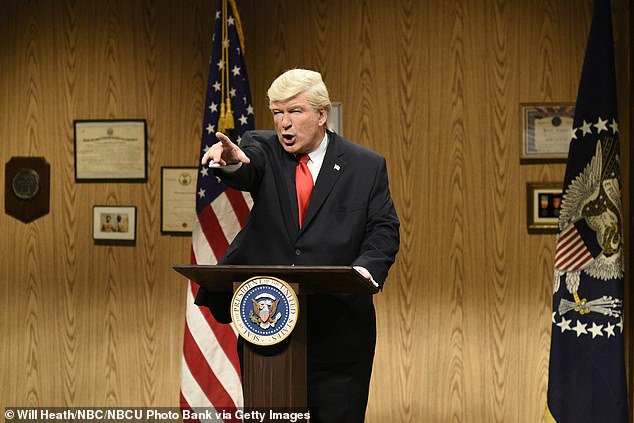 For Trump haters in the U.S. it was some consolation that pretty much every other weekend they could tune into satirical TV series Saturday Night Live and watch Alec Baldwin doing his turn as the president

Four years ago, she was still in hospital when she tweeted a photo of her enviable post-birth body in bra and pants a day after giving birth. ‘I feel that in the age of such strong body shaming, I want to do all that I can to normalise a real body and promote healthy self-esteem,’ she said.

Has being ‘Spanish’ helped? It may certainly have helped her get attention in an obsessively politically-correct U.S. media that is desperate to feature anyone who could tick the ethnic minority box.

She certainly liked to drop it into the conversation, telling a magazine before the birth of their first child, Carmen, that she planned to teach the baby to be bilingual, but adding: ‘It’s a little tricky because my husband doesn’t speak Spanish.’ Mrs Baldwin told people her name was pronounced the Spanish way, missing out the ‘h’.

When the Baldwins were attacked for having Carmen’s ears pierced when she was just six months old, her defenders were able to say that this was a perfectly common tradition in Spain.

Another cherished Spanish tradition is bull-fighting and Alec Baldwin — like Trump, with whom he has more than a few similarities — has earned a reputation as a thin-skinned bull of a man easy to enrage.

His turn as Trump helped resurrect a film career that was sunk by his truculence, fighting with studio bosses who he thought didn’t appreciate his talent as he also battled drink and drug addiction.

He almost killed himself aged 26 when he overdosed on cocaine, feeling his heart go ‘pop’, while preparing for a day of drug-fuelled debauchery with two female crew members whose husbands were away.

He met the beautiful but equally temperamental Kim Basinger in 1990 on the set of comedy Too Hot To Handle. He dismissed reports of their behaving like ‘two spoiled, ridiculous children’ as ‘largely fiction’ but the claims were certainly shocking. The pair allegedly drove the film’s director into hospital suffering from pneumonia and dehydration with their tyrannical demands and volcanic tempers.

It was claimed Basinger didn’t wear underwear on set and horrified sound engineers who had to listen to her tell Baldwin what she wanted to do to him in bed between takes.

They married in 1993 and had daughter Ireland before separating in 2000. Baldwin later admitted: ‘Life with Kim was largely centred around the narcissistic passions of two childless actors.’

The needy husband blamed her for destroying their marriage by transferring all her affection to Ireland. They fought a vicious seven-year custody battle, which ended after Baldwin left his terrible voicemail message for Ireland in which he called her ‘a rude, thoughtless little pig’ for humiliating him by avoiding his phone calls. Revealing he wasn’t sure if she was 11 or 12, he added: ‘You don’t have the brains or the decency as a human being.’

Years later, Ireland checked into rehab for what she called ‘emotional trauma’. Baldwin has claimed he contemplated suicide over the leaked voicemail but decided against it on the grounds it would only delight the Basinger camp.

Unlike Basinger, he mused gratefully in his 2017 autobiography (a book in which he tactfully omitted his alleged liaisons with Jackie Onassis, Michelle Pfeiffer, Tina Fey and Julia Roberts) Hilaria never criticises him. She certainly won’t be at the moment.

Until this new Latino fiasco, it was probably Mrs Baldwin who had to hold her tongue. Her husband and his big mouth have frequently landed him in trouble.

He has been repeatedly accused of scuffling with photographers and reporters, self-righteously denying additional complaints that he racially abused them. In 2011, he was removed from a passenger plane after refusing to stop playing a game on his phone as it prepared for take-off.

Three years later, he was arrested for disorderly conduct after riding his bicycle the wrong way down a one-way street.

Last year, a court ordered him to attend an anger management class after he admitted pushing another motorist in a row over a parking space.

When Hilaria, or rather Hillary, gave birth to daughter Carmen in 2013, step-sister Ireland posted a letter to the baby on social media. ‘You have been born into one crazy family,’ she told her. ‘You are both lucky and cursed at the same time.’

That’s no exaggeration — in Spanish or English.