Team GB diver Tom Daley has announced he will not be competing at this year’s Commonwealth Games in Birmingham after deciding to take a year out to ‘rest and be with my family’.

Daley was left out of the 18-strong team named by Team England on Tuesday, which includes his Tokyo synchro team-mate Matty Lee, and fellow Olympic gold medallist Jack Laugher.

Daley, who has won four Commonwealth Games gold medals and one silver while competing for England, revealed the news on Instagram on Tuesday.

The Tokyo 2020 gold medallist wrote: ‘I won’t be competing in this year’s Commonwealth Games in Birmingham.

‘Before the Olympics last year, my coach and I decided I would take a year out from the sport to have some time to rest and be with my family. Can’t wait to watch all my team mates kick some butt this summer!’

Team GB diver Tom Daley has announced he will not compete at the Commonwealth Games because he wants to spend more time with his family: pictured with husband Dustin Lance Black and son Robbie 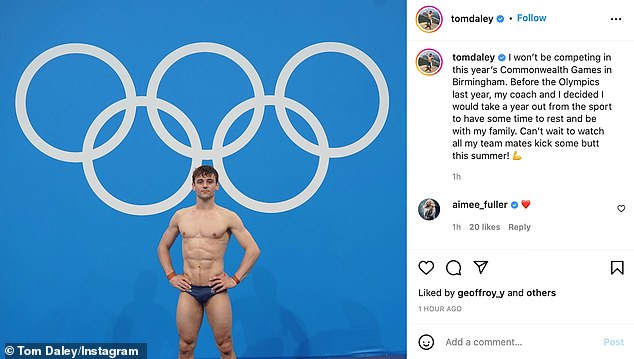 The 28-year-old is married to film director Dustin Lance Black and they have a young son, Robbie.

Daley, who was awarded an OBE in the New Year Honours list last year, finally ended his wait for Olympic diving gold in July.

He had bagged bronze medals at both London 2012 and Rio 2016 before finally getting to stand on top of the podium at Tokyo 2020, with an emotional medal ceremony afterwards among the enduring moments of the Games.

Amid stiff competition from the Chinese pair of Cao Yuan and Chen Aisen, Daley and diving partner Lee held their nerve to land first place in the men’s synchronised 10 metres platform, prevailing by just 1.23 points. 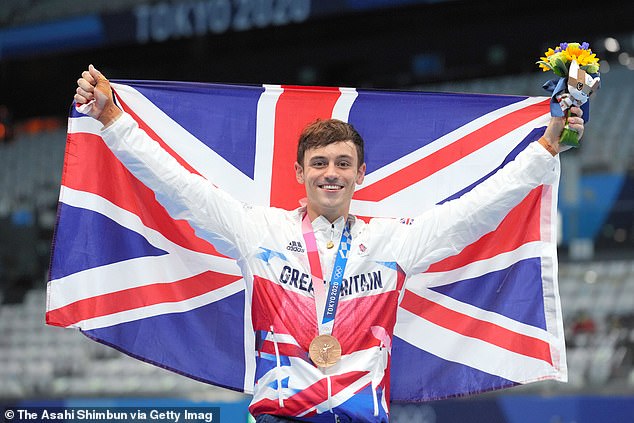 Daley has not ruled out competing at the Paris 2024 Olympics and could be enticed by the prospect of mixed or team events being put into the schedule.

He has also enjoyed plenty of success at the Commonwealth Games, winning two single gold medals from 10 metres in 2010 and 2014.

He earned something of a cult following during his time in the Japanese capital because of his knitting hobby, which he started just before the first UK lockdown in March last year.

Daley was pictured with his needles and thread while watching team-mates on several occasions in the Japanese capital. 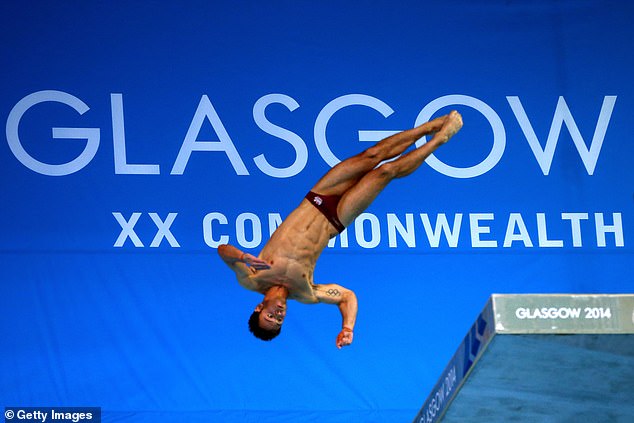 Lee, who won 10m synchro gold with Daley in the Japanese capital, made his Commonwealth Games debut on the Gold Coast four years ago but finished out of the medals.

‘I feel like I can do really well, and I think doing it for England, we always want it to “come home”, and I want to be the one to “Bring It Home”.’