Tom Brady’s difficult 2022 has gotten worse, as the Bucs star and his ex-wife Gisele Bundchen have been caught up in the crash of cryptocurrency exchange FTX.

FTX saw more than $6billion in withdrawals in the 72 hours leading up to Tuesday, and the market value of the exchange crashed by 70 percent this week as concerns about its financial health mounted.

The company’s CEO Sam Bankman-Fried lost an estimated $14.6 billion dollars – 94 percent of his net worth – overnight, according to Bloomberg, after FTX struck a bailout deal with rival company Binance.

While neither Brady or Bundchen are expected to see losses to the magnitude of Bankman-Fried, the company’s recent developments could certainly leave a dent.

The ex-couple took an equity stake in the company last year, with Brady being announced as a brand ambassador and Bundchen an environmental and social initiatives adviser.

The ex-couple’s net worth is estimated to be $650million.

‘It’s an incredibly exciting time in the crypto-world, and Sam and the revolutionary FTX team continue to open my eyes to the endless possibilities,’ Brady said in a press release at the time. ‘ 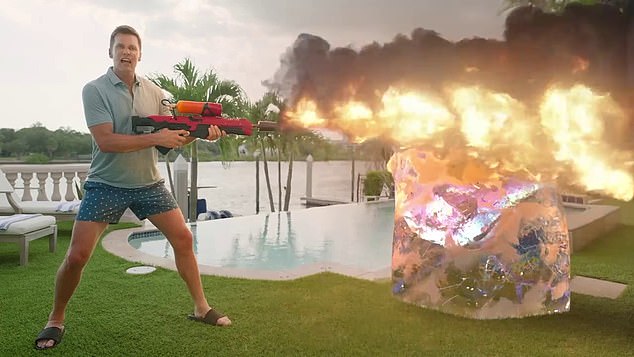 Brady appeared in commercials for the company, including one with a flamethrower

‘This particular opportunity showed us the importance of educating people about the power of crypto while simultaneously giving back to our communities and planet.’

Brady and Bundchen even appeared in commercials for the company in 2021.

The potential losses for Brady come after the quarterback’s recently announced divorce from Bundchen.

On the field, it hasn’t been much better for the seven-time Super Bowl winner either.

The Buccaneers are just 4-5 after snapping a three-game losing streak last weekend, as Brady has averaged nearly the lowest yards per attempt (6.4) of his career and he’s tossed multiple touchdowns in just one game so far.