Tom Brady’s golf-buddy bromance with Donald Trump is over, and the Tampa Bay Buccaneers quarterback says it’s been that way for some time.

Despite the fact that they both now live and work in Florida, Brady told Variety in a wide-ranging interview that he and the ex-President haven’t spoken ‘in a lot of years.’

He went so far as to say the media ‘mischaracterized’ their relationship by falsely portraying the pair as close.

Brady was often pictured golfing with Trump before the latter took office in 2017, and even had a conspicuously placed ‘Make America Great Again’ hat in his locker with the New England Patriots two years earlier.

But when asked about his relationship now, Brady reminded readers that he doesn’t like disparaging anyone, and doesn’t want any responsibility for the words or actions of others. 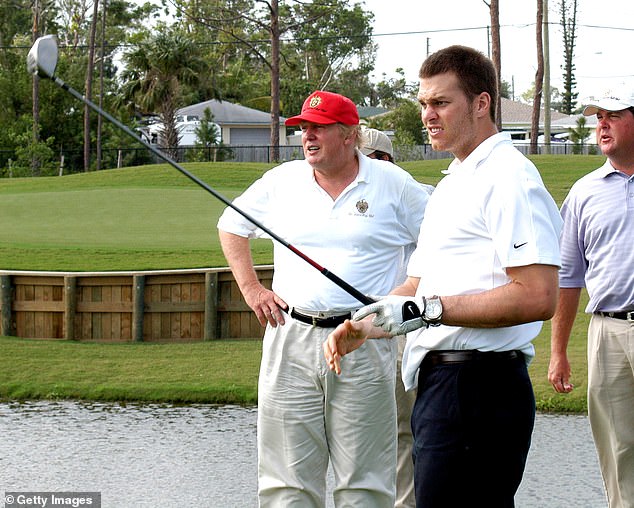 The Brady-Trump relationship dates back to 2001, and has mainly centered around golf.

‘This was 17 or 18 years ago,’ the 44-year-old Brady told Variety. ‘I was so young. I got to go to a private golf course. I thought it was the coolest thing in the world.’

However, Trump has claimed that Brady phoned him to voice his support during the 2016 election. Previously, when reporters noticed his MAGA hat in his locker in 2015, Brady said he ‘hoped’ Trump would be a great president.

‘There’d be a putting green on the White House lawn, I’m sure,’ Brady said.

Meanwhile, Brady’s supermodel wife, Gisele Bundchen, has said flatly that she and her husband did not back Trump as a candidate. 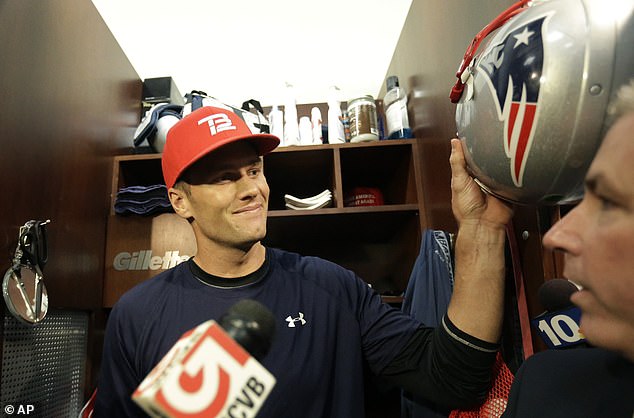 Trump has claimed that Brady phoned him to voice his support during the 2016 election. Previously, when reporters noticed his MAGA hat (PICTURED: upper right) in his locker in 2015, Brady said he ‘hoped’ Trump would be a great president 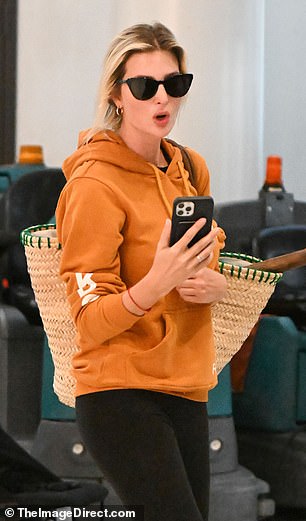 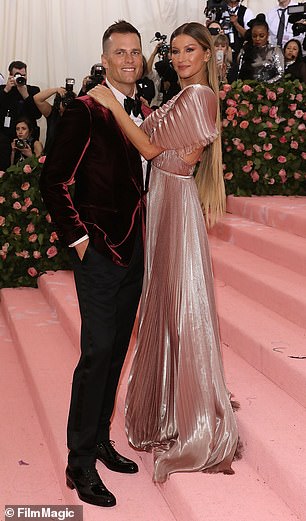 BBefore they were both married, Trump allegedly suggested that Brady date his daughter, Ivanka (left). Brady’s supermodel wife, Gisele Bundchen (right), has said flatly that she and her husband did not back Trump as a candidate 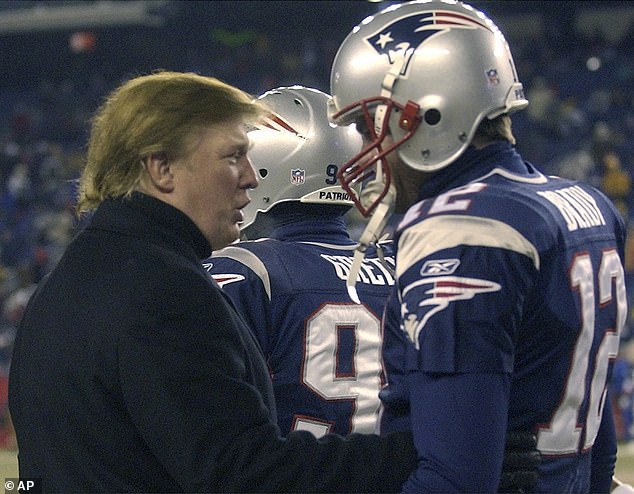 Donald Trump, left, stops to talk to New England Patriots quarterback Tom Brady prior to the start of the game at Gillette Stadium, Saturday, January 10, 2004, in Foxborough 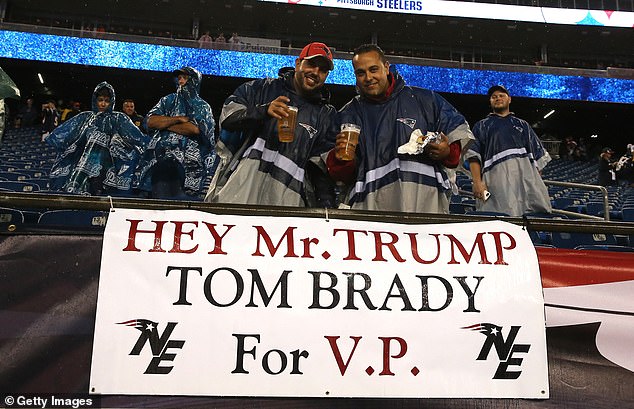 ans stand with a sign stating ‘Hey Mr. Trump Tom Brady for V.P.’ before the game between the New England Patriots and the Pittsburgh Steelers at Gillette Stadium on September 10, 2015

Brady’s interview with Variety, in which he also declined to set a retirement date, is not the first sign that his relationship with Trump was deteriorating.

After leaving the Patriots for the Bucs in 2020, Brady told Howard Stern that he declined Trump’s invitation to speak at the 2016 Republican National Convention (Stern said he, too, declined).

Brady became a bit flustered when speaking to Stern about Trump’s repeated suggestions that he date Ivanka, Trump’s eldest daughter.

‘Trump always dreamed of you marrying Ivanka, and he told me he suggested it to you—but did you ever go out with her?’ Stern asked.

‘That was a long time ago in my life… No, there was never that, where we ever dated or anything like that,’ Brady said, before referencing his own daughter, Vivian.

‘I have a daughter… would I ever arrange my daughter…’ Brady said as Stern cut him off. 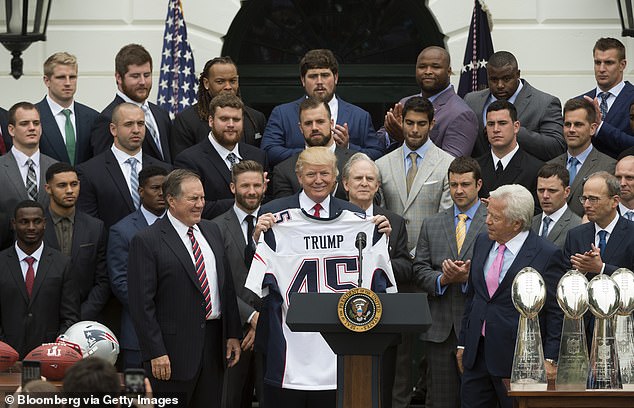 Brady also skipped the Patriots’ White House visit in April 2017, citing ‘personal family matters’ and a previous trip to the Oval Office during the Obama years.

He did, however, attend the Bucs’ White House visit in 2021 following their Super Bowl LV victory, and even cracked a few jokes about the election Trump had lost months earlier.

‘Not a lot of people think that we could have won. In fact, I think about 40 percent of people still don’t think we won. You understand that, Mr. President?’ Brady laughed.

‘I understand that,’ Biden responded, laughing with Brady. 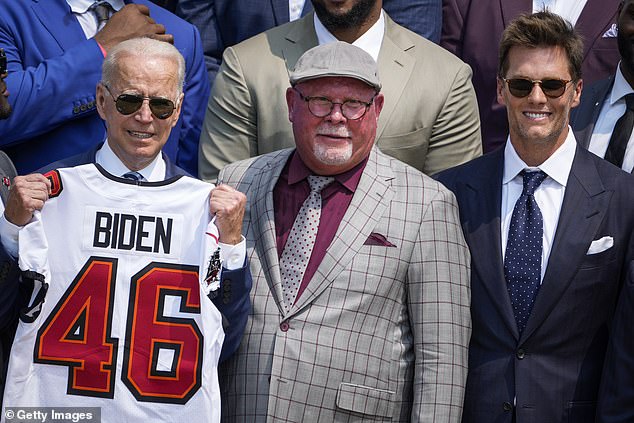 Brady did attend the Bucs’ White House visit in 2021 following their Super Bowl LV victory, and even cracked a few jokes about the election Trump had lost months earlier