Rob Gronkowski, former teammate of Tom Brady, sent his ‘support’ and wished the current Tampa Bay Buccaneers quarterback, ‘nothing but success,’ following his divorce during an interview with Page Six published on Tuesday.

The 33-year-old sports star played alongside the seven-time Super Bowl winner, 45, for both the New England Patriots and Buccaneers during the entirety of his eleven-year career.

Gisele Bundchen and Tom ‘amicably’ filed for divorce in October 2022 after 13 years of marriage reportedly due to the professional NFL star returning to the league shortly after announcing his retirement.

Rob, who is also co-starring alongside Tom in the upcoming sports comedy titled, 80 For Brady, told the publication, ‘As a friend and a teammate of Tom’s through my whole career of 11 years, you just always send your support and love to him.’

The former tight end, who is nicknamed the ‘Gronk,’ further added, ‘Even when I’m not playing with him, I love to see him be successful.’

The football star explained that Brady’s, ‘resume, his discipline is second to none. He’s just such a great teammate. You want to see nothing but success for him.’

The two sports stars both played for the New England Patriots together as well as the Tampa Bay Buccaneers. However, in 2021, Rob announced his official retirement from the NFL for the second time. 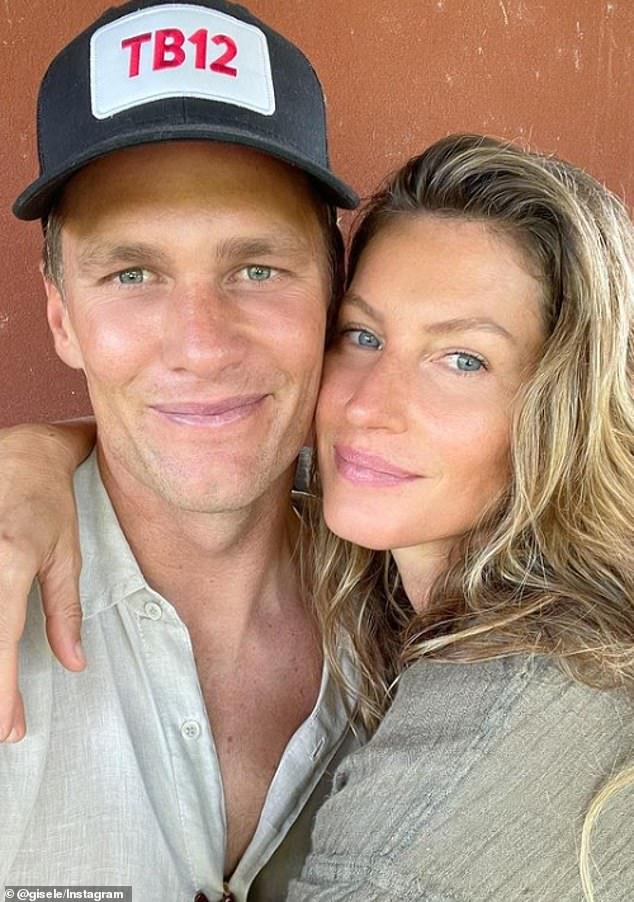 Going separate ways: The sports star and supermodel finalized their divorce in October 2022 after 13 years of marriage 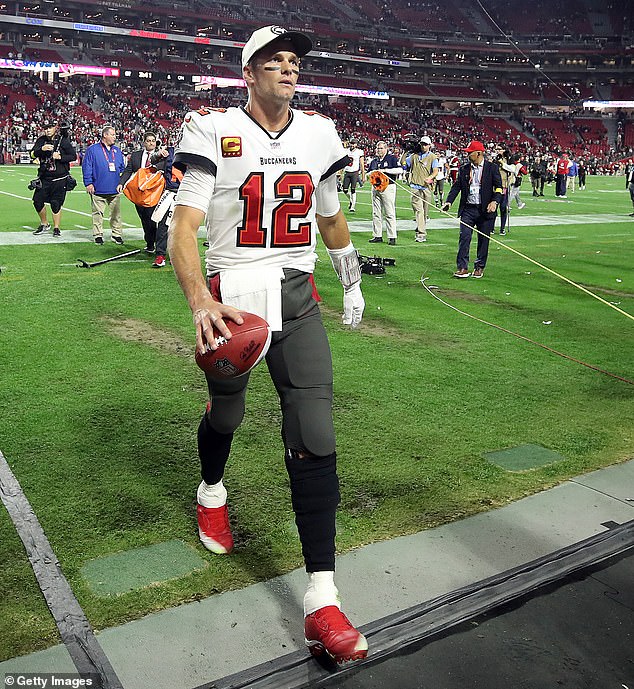 Support: The former tight end, who is nicknamed the ‘Gronk,’ further added, ‘Even when I’m not playing with him, I love to see him be successful’; the quarterback seen last month in December 2022

Late last year in October 2022, Gisele and Tom’s divorce was finalized the same day of the filing in the state of Florida.

One month earlier in September, a source had informed People that ‘tension’ had begun to develop between the former couple, stating that the supermodel, ‘was so happy when he announced his retirement, and she wasn’t thrilled at all when he went back on that.’

The Brazilian-born star had voiced her opinion about her then-husband playing the sport. Tom had initially announced his retirement in February 2022, however, just one month later, the quarterback revealed he will be returning.

‘Obviously, I have my concerns, this is a very violent sport, and I have my children and I would like him to be more present,’ Gisele explained to Elle in September of last year. ‘I have definitely had those conversations with him over and over again.’

She later added, ‘But ultimately, I feel that everybody has to make a decision that works for them. He needs to follow his joy, too.’ 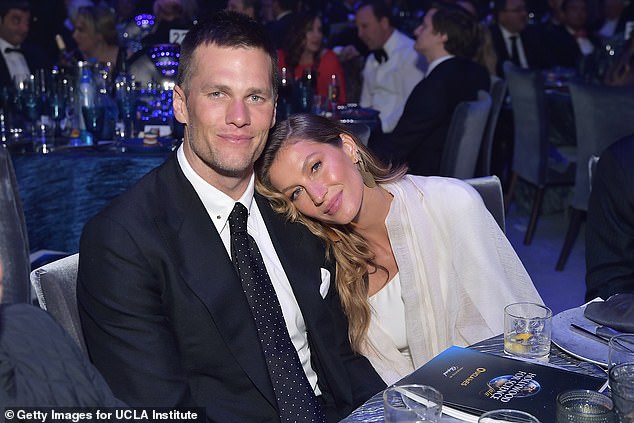 ‘Tension’: A source had informed People in September that ‘tension’ had begun to develop between the former couple, stating that the supermodel, ‘was so happy when he announced his retirement, and she wasn’t thrilled at all when he went back on that; both seen in 2019 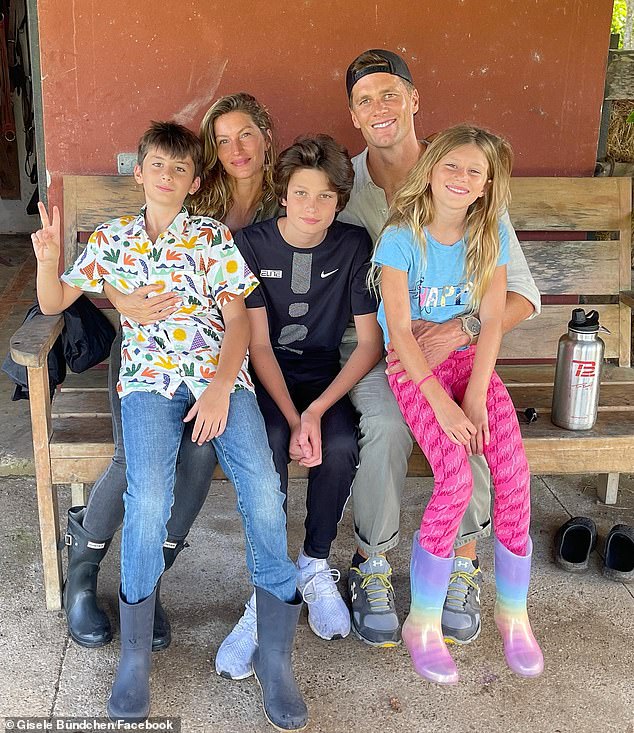 Raising their children: The former couple share two children together, son Benjamin, 13, and daughter Vivian, 10, and upon marrying Tom, Gisele became stepmother to Tom’s son, John, 15, whom he shares with Bridget Moynahan from a previous relationship

Later that same month, a separate insider informed People that the model, ‘doesn’t hate that he’s playing football, but she sure hates the way he handled the retirement and coming back.’

‘He knows that, and he’s doing what he can do to smooth things over. He does know that this is his last season if he wants to stay married.’

The former couple share two children together, son Benjamin, 13, and daughter Vivian, 10. Upon marrying Tom, Gisele became stepmother to Tom’s son, John, 15, whom he shares with Bridget Moynahan from a previous relationship.

After their divorce was finalized in October 2022, the pair released joint statements on Instagram to announce the news, but still maintain a healthy co-parenting relationship for their children. 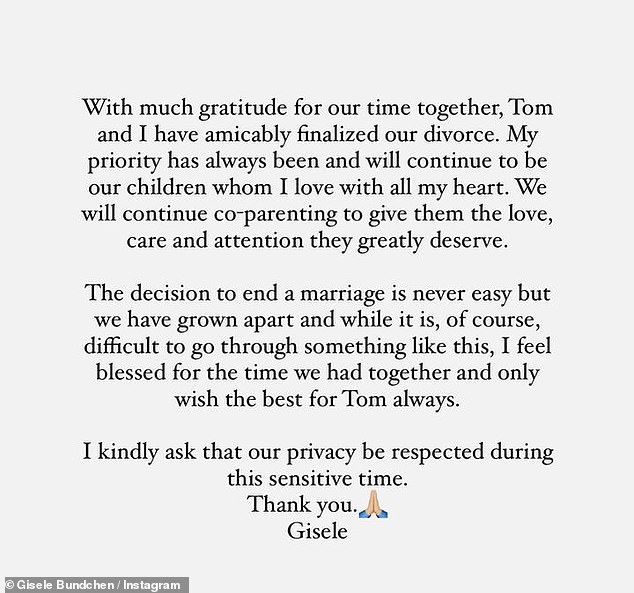 Statement: Following their divorce, the two uploaded a statement on Instagram, with Gisele revealing that both she and Tom had ‘amicably’ filed 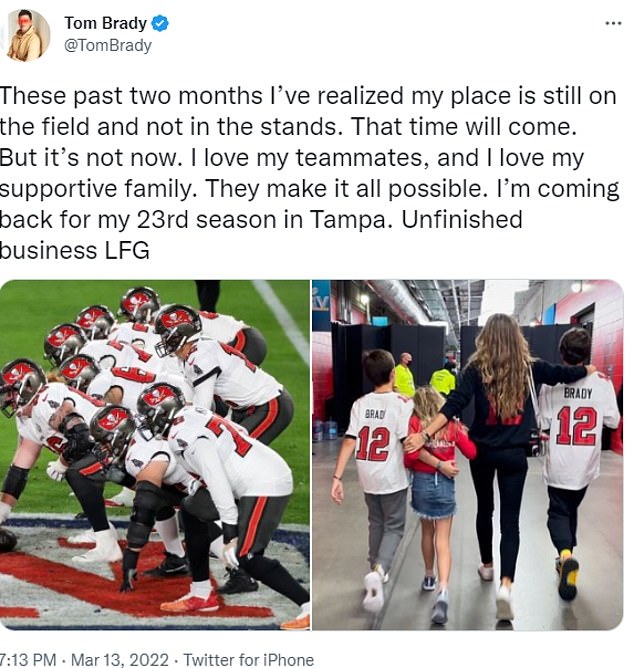 Un-retiring: After announcing his retirement from the NFL in February 2022, he revealed that he would be returning to the sport one month later in March 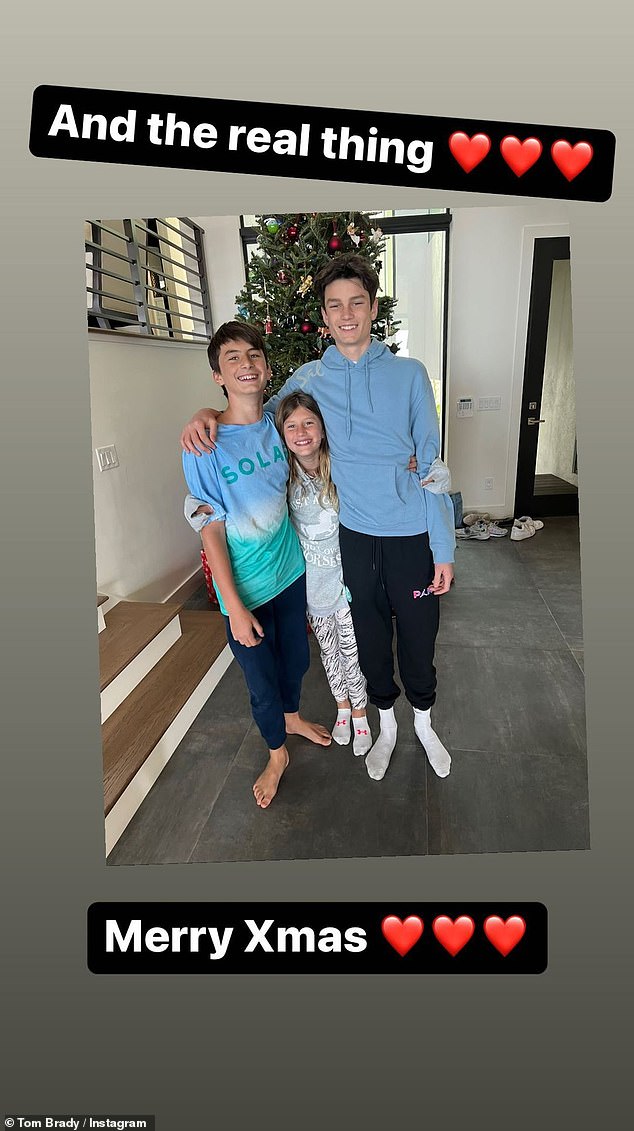 Importance of family: Tom spent time with his three children over the holidays and shared a snap onto his Instagram story as they smiled for a group photo

During an episode of his Let’s Go! podcast that recently aired on Monday, Tom reflected on family, stating that the, ‘responsibility is amazing. Children are… there’s nothing to me more important than my kids.’

Along with his surprise return to the NFL, Tom has also taken another career step and will appear on the big screen, along with his friend, Rob, in the sports comedy, 80 For Brady.

The film, which is set to premiere next month on February 3, follows the premise of, ‘A group of friends made it their life-long mission to go to the Super Bowl and meet NFL superstar Tom Brady,’ according to an IMDB synopsis.

Tom will portray himself, and also stars Jane Fonda, Sally Field, Lily Tomlin, and Rita Moreno in the leading roles.