Tom Brady and Gisele Bündchen’s recent rocky relationship has had nothing to do with the NFL player’s decision to go back to football after announcing his retirement – and the married pair are still living in separate houses.

The Brazilian supermodel and her seven-time Super Bowl husband, 45, have been at the center of a spell of speculation after fans noticed that Gisele was conspicuously missing from the sidelines – and the stands – of Brady’s first home game on Sunday.

Since rumors of the tensions between the pair first emerged, multiple reports speculated that Brady’s decision to U-turn on his retirement in March had triggered their marital problems.

He had initially quit his career, in part, to focus on his family – as he vowed to spend more time with them since Gisele ‘deserves what she needs from me as a husband, and my kids deserve what they need from me as a dad.’

Many believed that Brady re-entering the NFL became a bone of contention for Bündchen.

However, their rift is completely unrelated to the former Patriots’ star’s football career, DailyMail.com can confirm.

Bündchen is her husband’s ‘number one cheerleader’ and said that she would not care if he played until he was in his 50s. But the friction between the two has still resulted in them living apart from one another.

The gorgeous married couple pictured at the 2019. The pair are currently not living together, DailyMail.com can confirm 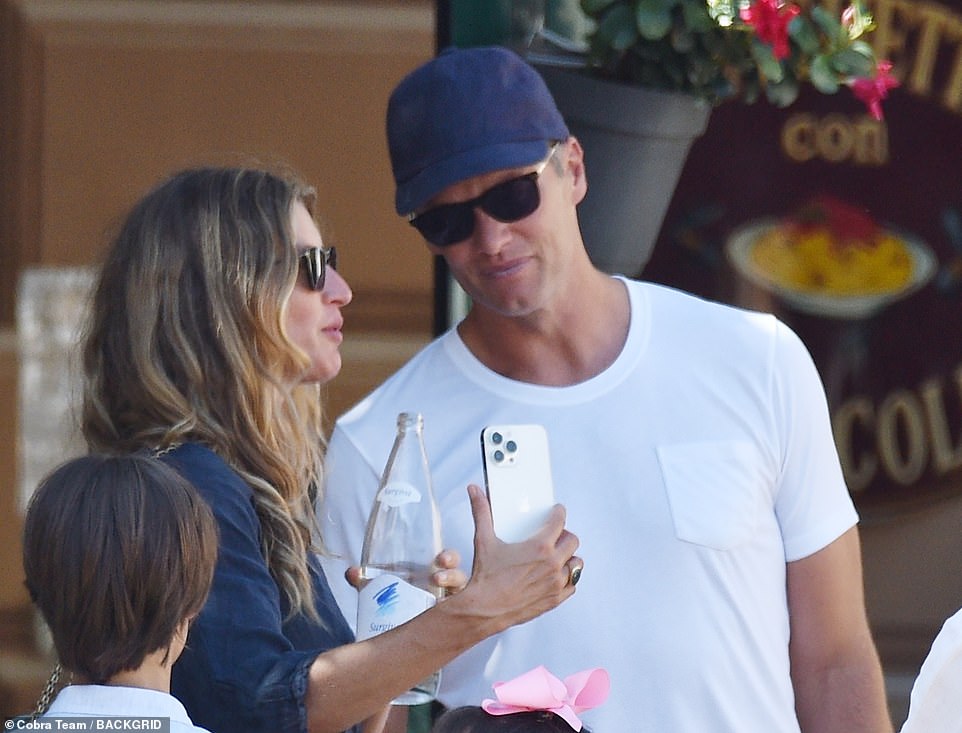 Brady and Bündchen pictured during their family’s vacation to Italy in July, there were no signs that the couple was in crisis 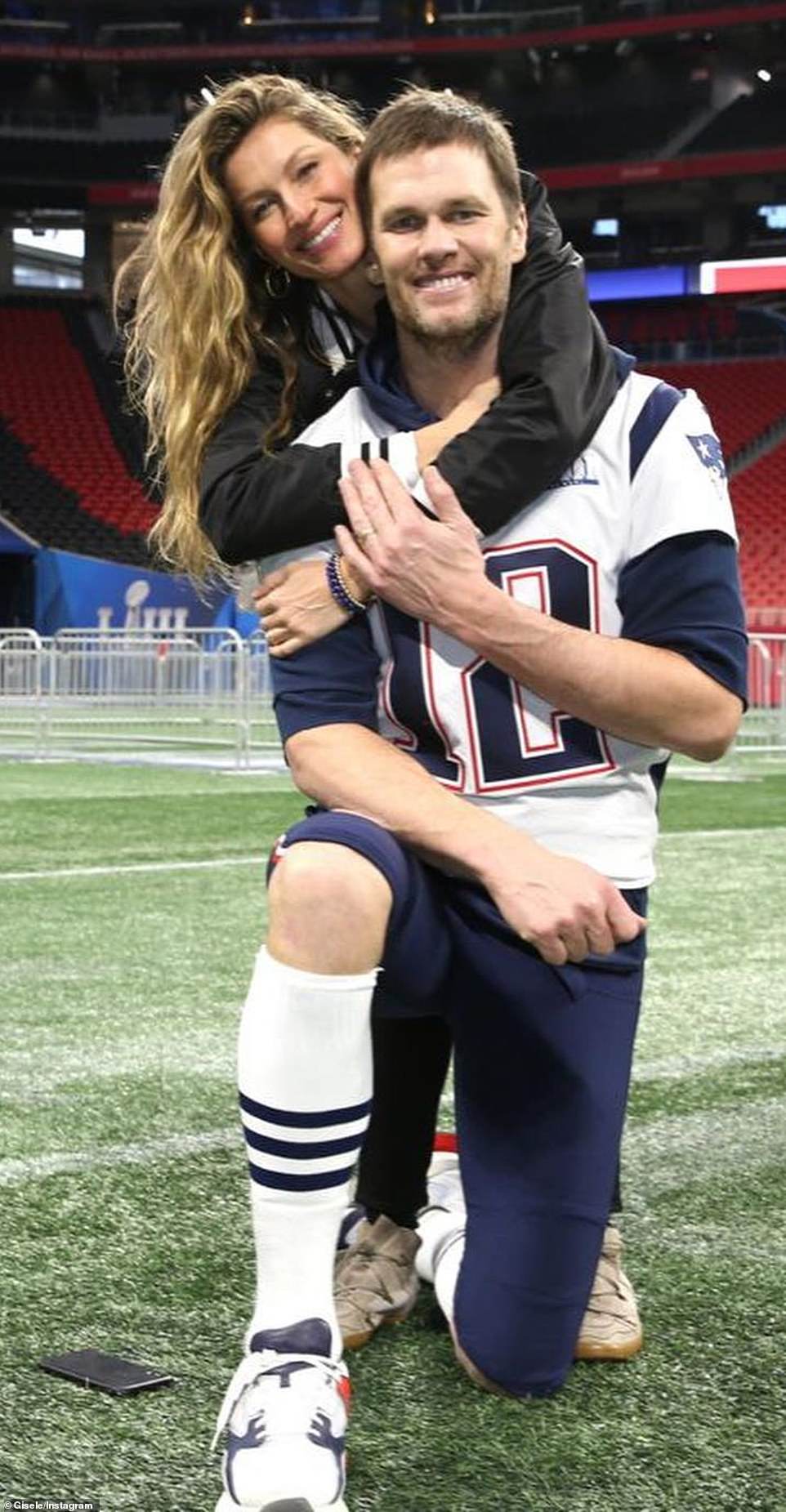 In a September interview with Elle magazine, Bündchen listed the sacrifices that she made for her husband’s football career, including moving to Boston 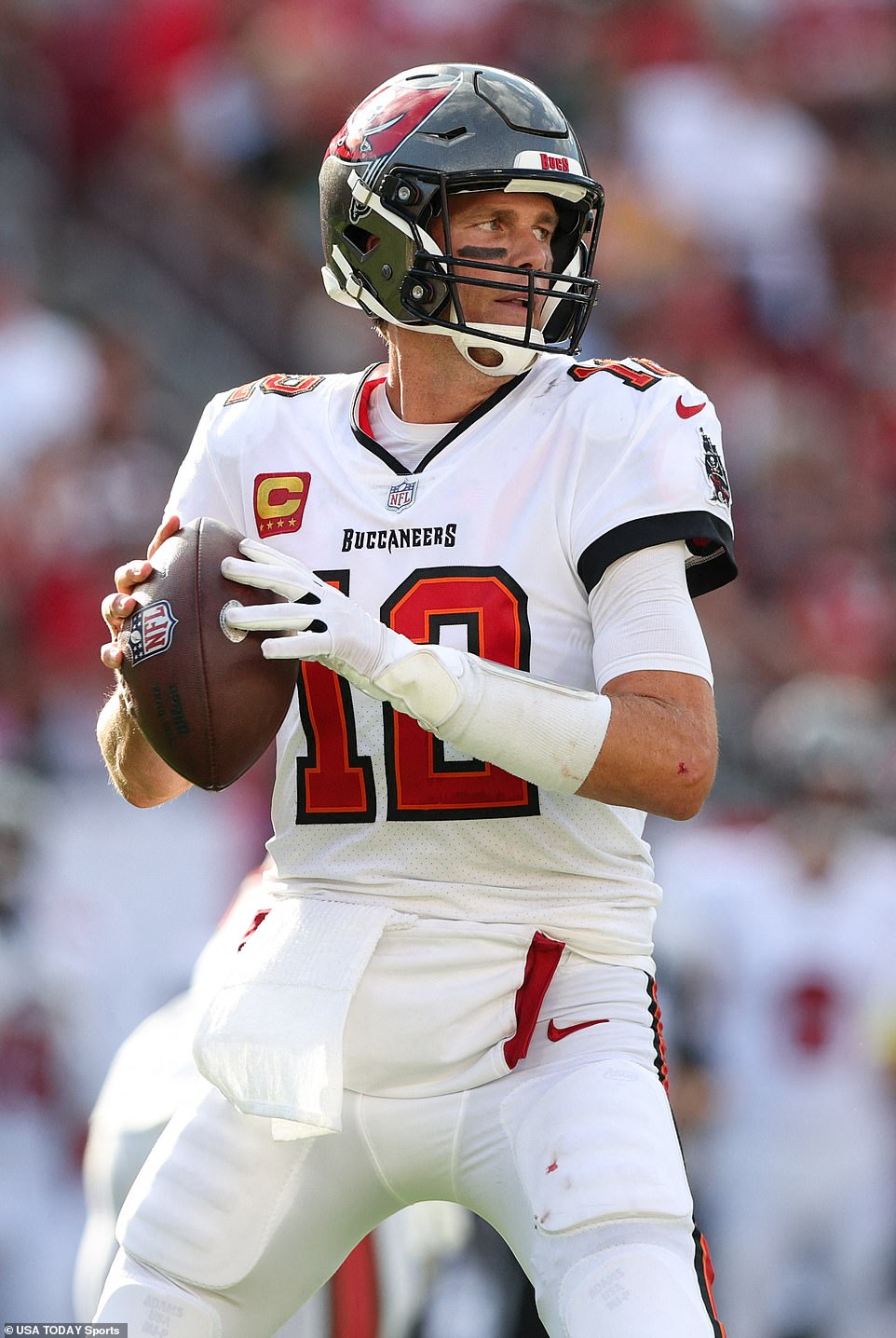 Speaking exclusively to DailyMail.com, a source confirmed their physical separation was not impacted by Brady’s move to rejoin his beloved sport.

Brady and Bündchen married in 2009. In a September interview with Elle, she spoke about the sacrifices that she made for their marriage and her husband’s career.

The Brazilian model said: ‘I’ve done my part, which is [to] be there for [Tom]. I moved to Boston, and I focused on creating a cocoon and a loving environment for my children to grow up in and to be there supporting him and his dreams.’

During that interview, Bündchen spoke about the NFL saying: ‘This is a very violent sport, and I have my children and I would like him to be present. I have definitely had those conversations with him over and over again.’

In a video posted on Sunday, Brady hugged his three children – his son Jack, 15, who he shares with Blue Bloods star Bridget Moynahan, and his two kids with Gisele: Benjamin, 12, and Vivian, 9.

The seven-time Super Bowl winner leaned over his daughter as she grinned ear-to-ear ahead of the game.

He then hugged Benjamin before Vivian whispered to the quarterback, prompting him to tenderly kiss her on the forehead. After appearing to walk away to begin the game, Brady doubles back to hug his eldest son.

The video was shared on the NFL and the Tampa Bay Buccaneers’ Twitter pages. On the Bucs page, their post read: ‘All about family.’

It’s understood that the kids were brought to the game by Brady’s mother and his sisters.

Despite the rumors of problems, in the lead-up to Brady’s last game, against the Cowboys, she tweeted: ‘Let’s go @TomBrady! Let’s go Bucs!’ 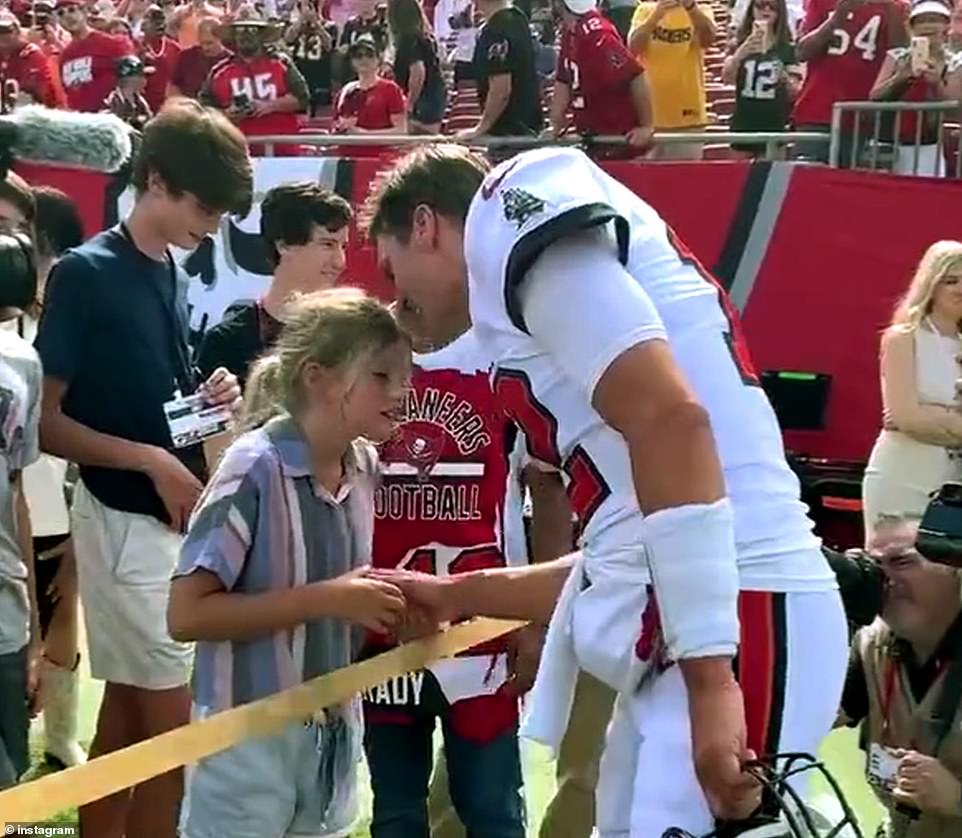 Tom Brady embraced his daughter, Vivian, 9, prior to his losing effort on Sunday against the Green Bay Packers 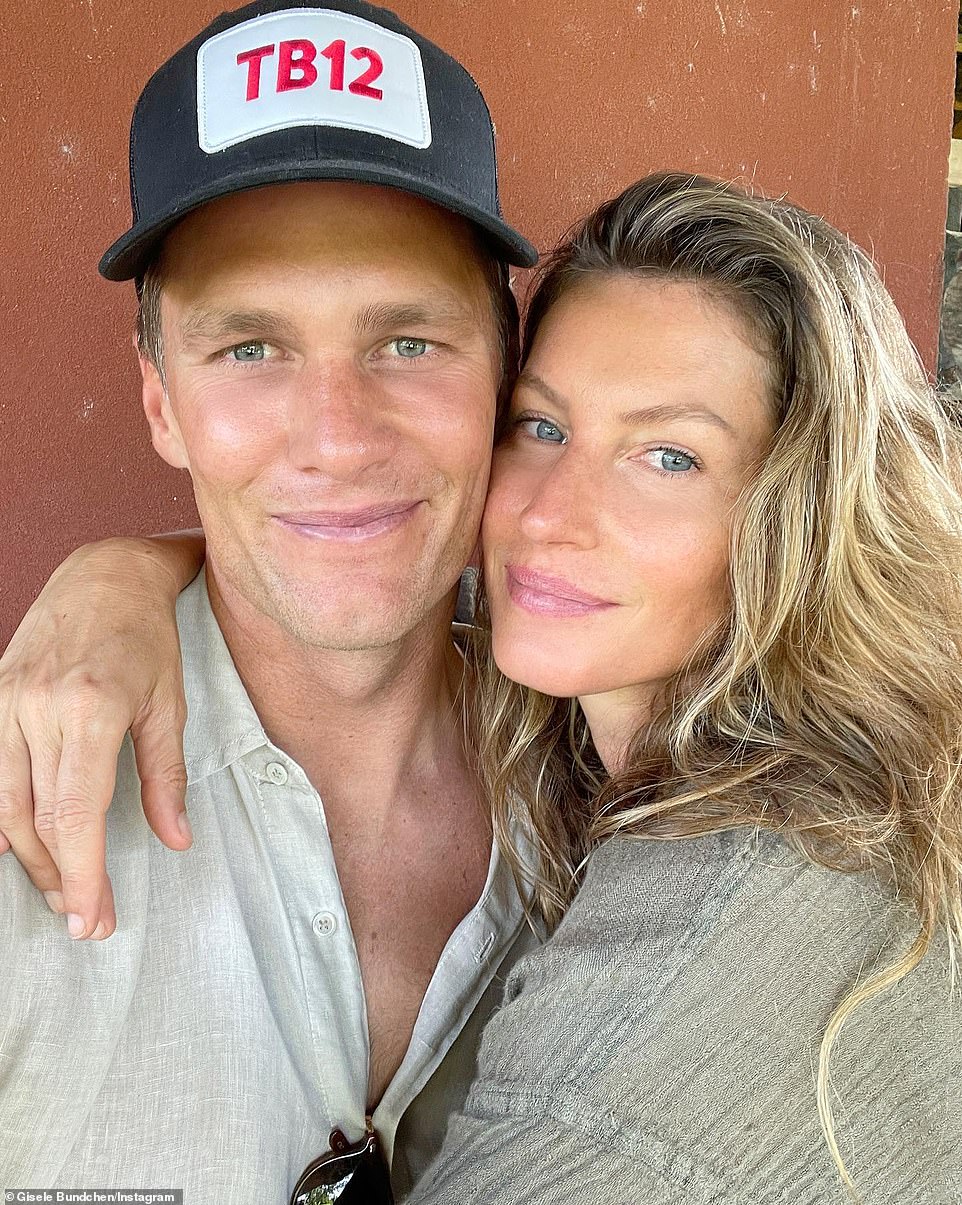 Gisele and Tom’s relationship is said to be on the rocks – and the DailyMail.com can confirm that the celebrity couple are currently living apart

During the warm-up to the game, Brady was pictured wearing a t-shirt featuring his high school yearbook picture with the caption: ‘Greatness lasts forever.’

Brady suffered a finger injury in the lead-up to the showdown with Aaron Rodgers’ Packers, the Bucs reported this week.

It was later revealed that the injury was on Brady’s ring-finger, albeit on his right, rather than left hand. Coach Todd Bowles said on Friday that the injury would not affect his ability to play.

During the game, Brady ducked to avoid a sack and rumbled for 18 yards only to bust his knee brace and see the play negated by penalty.

Missing his top three receivers to injuries and suspension and his favorite target to retirement, the 45-year-old Brady isn´t passing at his usual prolific rate this season.

Still, the Tampa Bay Buccaneers had a chance against the Green Bay Packers after Brady connected with Russell Gage on a 1-yard touchdown with 14 seconds left. But a delay-of-game penalty pushed the 2-point conversion back to the 7 and Brady´s pass fell incomplete, giving the Packers a 14-12 victory Sunday.

‘Our job is to go out there and score points and we´re just not doing that,’ Brady said. ‘You´re not going to score points if you don´t execute well.’ 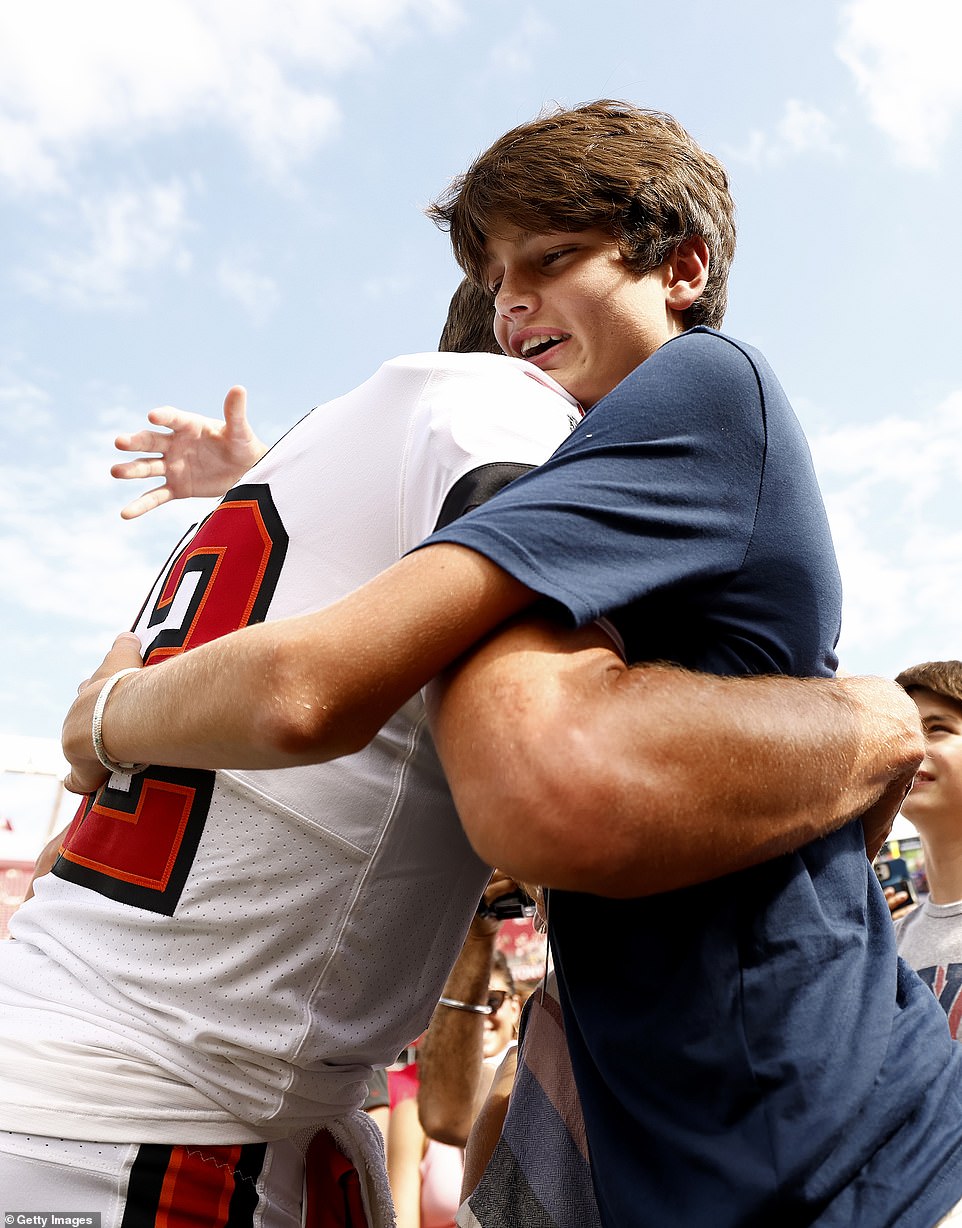 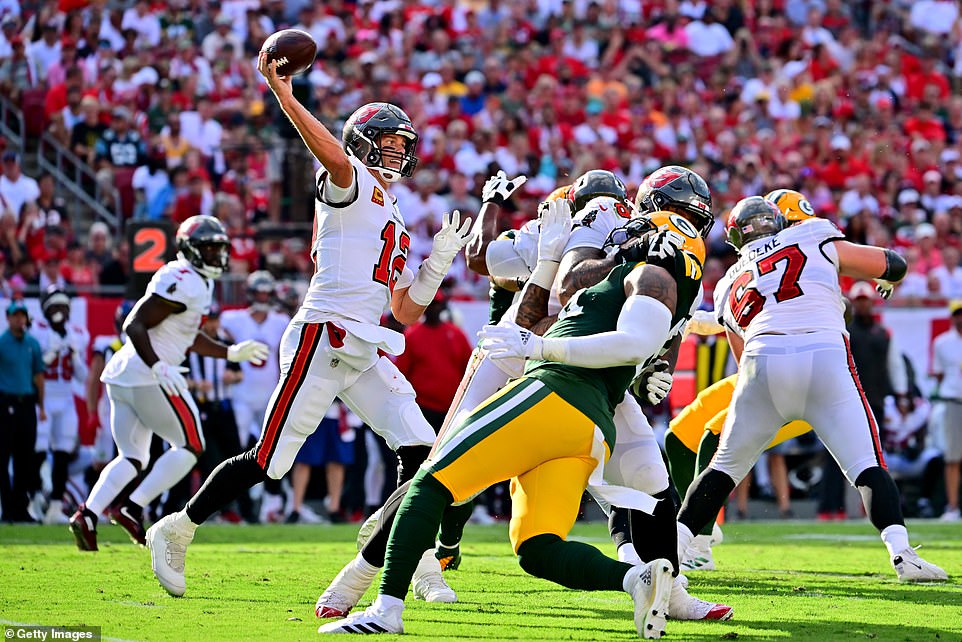 Rose said in an appearance on Paul’s podcast, BS: ‘I just personally think that Giselle, including just all these wives of these athletes, and girlfriends, these athletes, I don’t think they get enough credit.’

She went on: ‘I don’t feel like they honestly get the credit they deserve for putting up with these men and within their businesses and what they’re doing like, I’m sorry, but Giselle doesn’t get nearly enough credit.’

Brady and Gisele have spoken fondly of his blended family but at the time, Moynahan’s pregnancy was a shock to all parties.

Brady was already dating Gisele in 2006 when he was dumbstruck by the news that the actress was pregnant with their son.

Gisele has reflected on the time in her memoir and said that it turned her life ‘upside down,’ adding that she did not have an ‘easy time’ coming to terms with it.

However the Brazilian model said that over time her ‘heart expanded in ways (she) didn’t know were possible.’

Moynahan said in her own memoir that she ‘barely left the house’ during her pregnancy because of all the attention, calling herself ‘reclusive’ and ‘wildly private.’

She wrote: ‘Having a baby should have been the most joyous time of my life, but instead I felt assaulted.’

Gisele has said that she doesn’t like calling herself ‘stepmom’ to Jack and said she prefers to call herself ‘bonus mom.’

She has also called him her ‘bonus child.’ 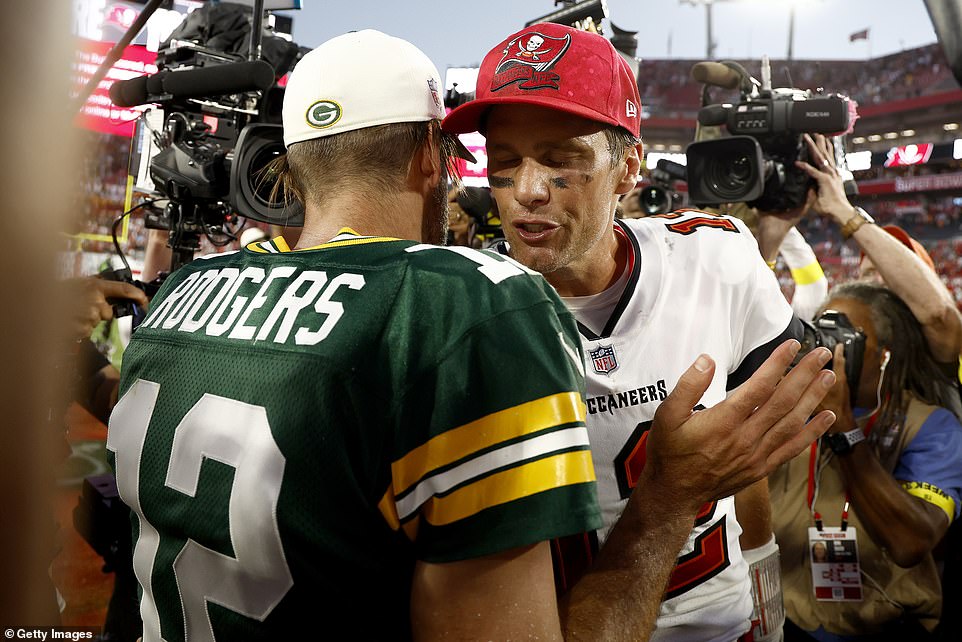 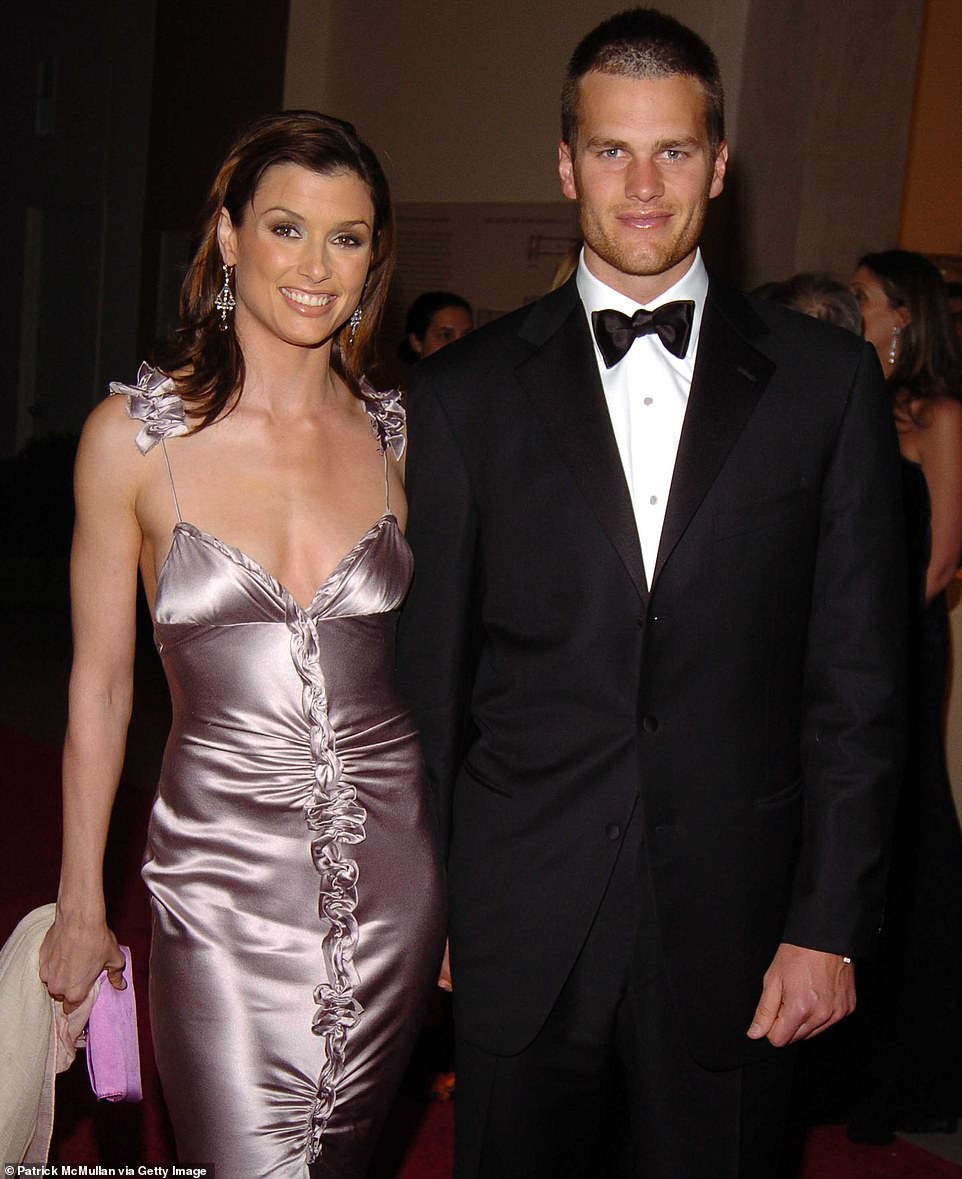 In an interview with Howard Stern, Brady has said that the period was ‘very hard’ for Gisele.

He said: ‘To think she fell in love with this guy, and now this guy’s ex-girlfriend is pregnant. And it was very challenging for my son’s mom because she didn’t envision that either.’

Gisele has in the past talked about how she put her modeling career second so that Brady could chase seven Super Bowl victories on his way to becoming arguably the greatest quarterback of all time.

In May she told British Vogue: ‘I don’t think relationships just happen; it’s never the fairy tale people want to believe it is. It takes work to be really in sync with someone, especially after you have kids.

‘His focus is on his career, mine is mostly on the kids.’

In a recent interview with Elle magazine, Gisele said she had ‘concerns’ about Brady returning to football, a decision which made him the oldest quarterback ever to play in the NFL. 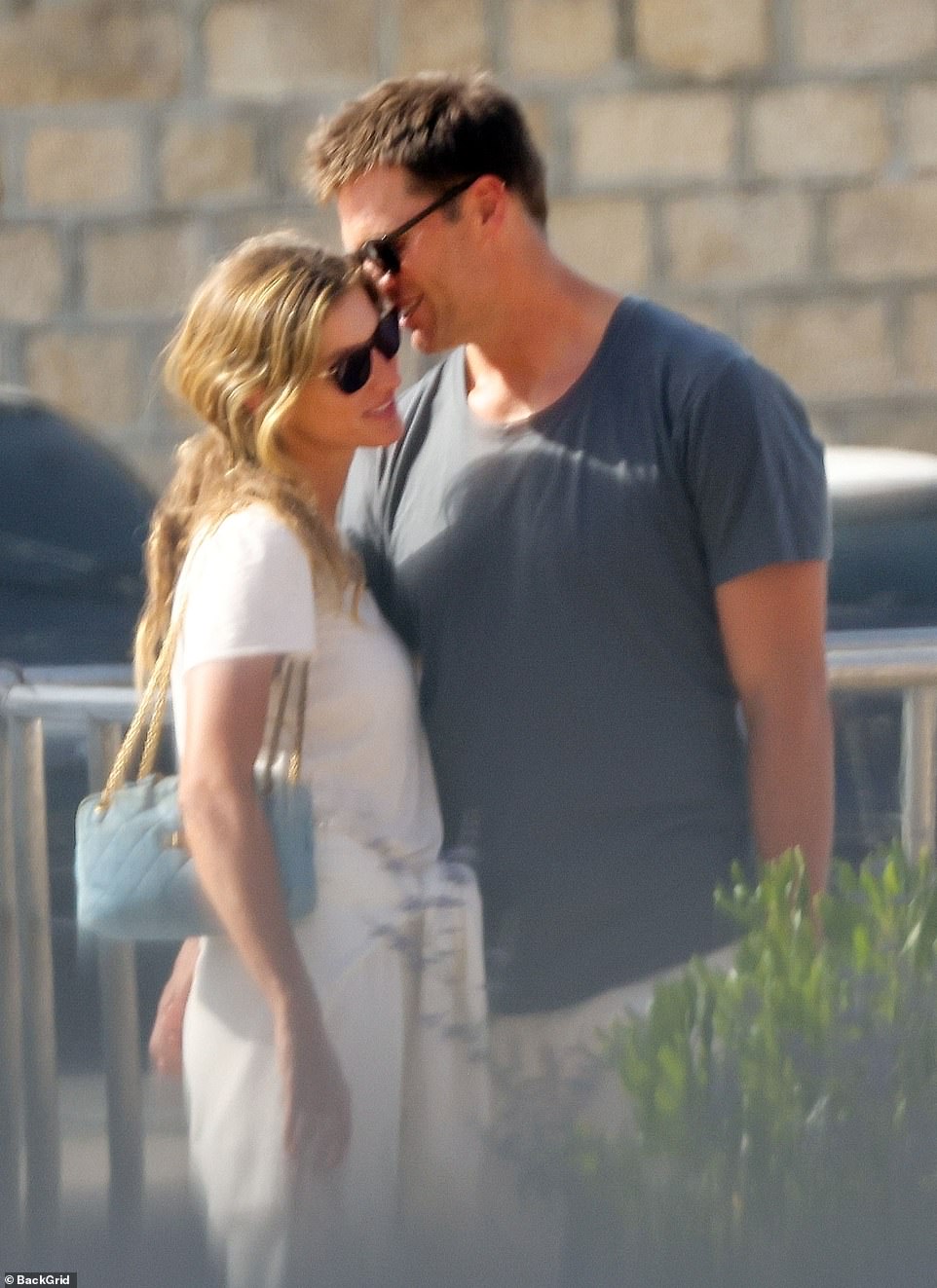 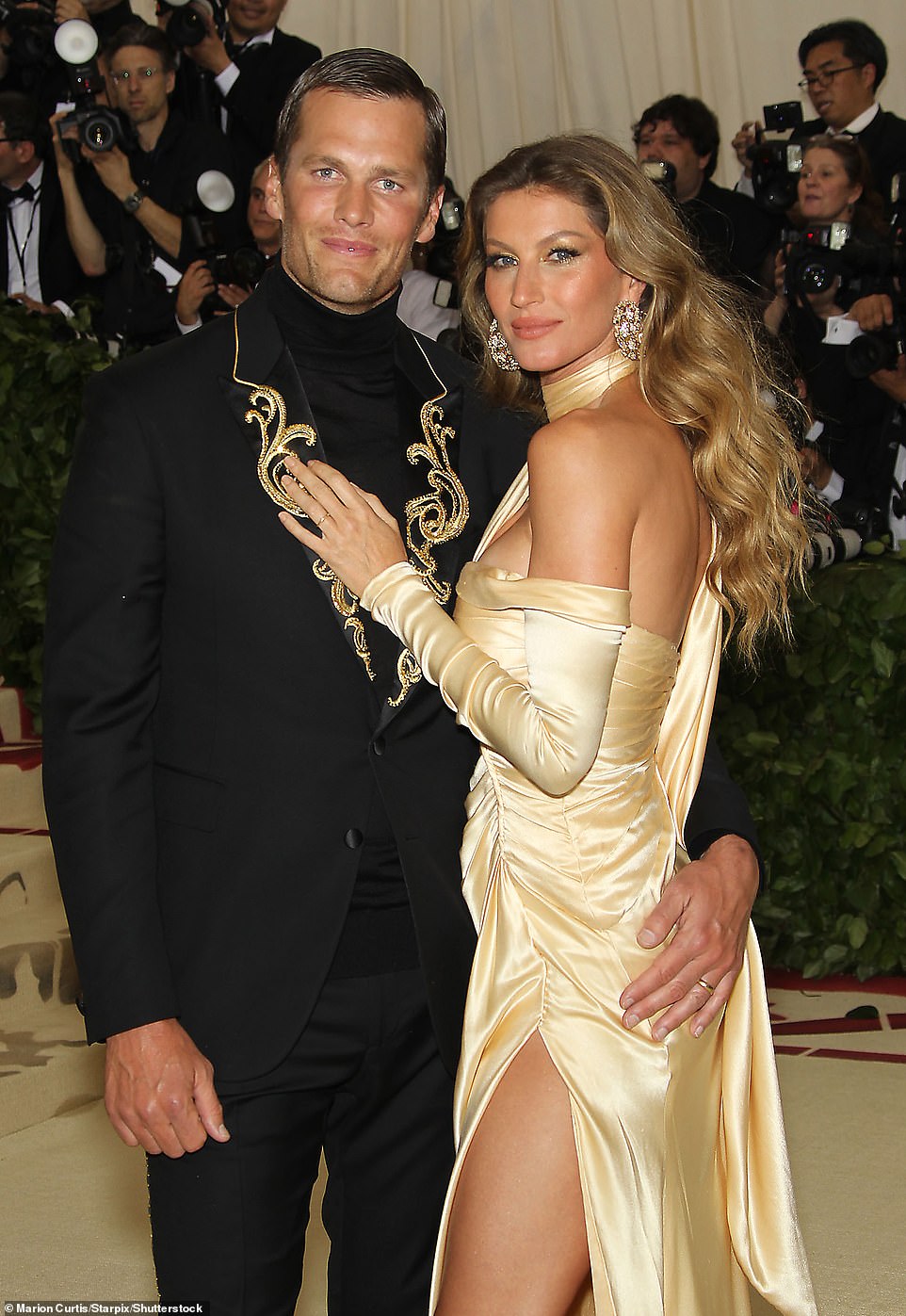 Tom Brady and Gisele Bündchen attending the Met Gala in 2018

She said: ‘This is a very violent sport, and I have my children and I would like him to be more present.

‘I have definitely had those conversations with him over and over again. But ultimately, I feel that everybody has to make a decision that works for (them) He needs to follow his joy, too.’

Gisele added that she was ‘very fulfilled, as a mother and as a wife,’ adding in an apparent reference to her own career: ‘And now it’s going to be my turn.’

But since Brady’s decision to unretire her life has been overshadowed by questions about football yet again.

Gisele skipped out on an event at fashion week in New York even though she was supposed to attend and was in the city.

She was reportedly seen crying on the phone and has been photographed with daughter Vivian Lake without Brady in sight.