When I met Sir Evelyn de Rothschild, then aged 86, in his short-lived gourmet chocolate shop in Belgravia, he regaled me with his latest big idea: No tax for the over-90s.

They should reduce the taxes on old people so they can be self-sufficient and live in their own homes.’

Colossus: Sir Evelyn de Rothschild (pictured with wife Lynn) has died peacefully at home at the age of 91

Perhaps it was tongue in cheek, perhaps not.

Sir Evelyn, who has died peacefully at home at the age of 91, would have been eligible for the tax break himself, in the unlikely event it had made it into any chancellor’s Budget speech.

He didn’t need the money, of course: A colossus of a financier, he was a multi-billionaire.

He was also a chocoholic and confided he had set up his exquisite, and costly, confectioner to compensate for his childhood deprivation of sweets during the war.

The shop closed down in the pandemic, but it was little more than a bagatelle in a legendary financial empire.

Born in London in 1931, the only son of Anthony de Rothschild and Yvonne Cahen d’Anvers, Sir Evelyn was destined from birth for the family bank.

After Harrow and an economics degree at Trinity College Cambridge, he joined the bank in 1957. His career there spanned more than four decades.

Under his stewardship, the bank’s total assets grew from £40million to £4.6billion.

Sir Evelyn was close to top politicians on both sides of the Atlantic, including Margaret Thatcher.

In 1986, the then Conservative government turned to NM Rothschild for help with one of its flagship policies – and one that would revolutionise the City – privatising British Gas.

According to Rothschild lore, the ‘Tell Sid’ campaign to sell shares to the public was named after one of its postroom clerks.

The real-life Sid worked at the bank’s headquarters at New Court in the City. The British Gas sale positioned NM Rothschild to cash in on a lucrative wave of privatisations that took off around the world.

In the UK it was involved in the sell-offs of British Steel, the electricity and water companies, British Coal and BT.

The couple were introduced by Henry Kissinger and spent a night of their honeymoon in 2000 at the Clinton White House.

Forester de Rothschild, who survives him, is a successful businesswoman in her own right.

As well as his role in the family firm, Sir Evelyn also served as chairman of The Economist magazine from 1972 to 1989.

Knighted in 1989, he was for many years a trusted financial adviser to the late Queen Elizabeth II.

Her Majesty was, he told me, quite frugal because ‘she was brought up during the war, with very careful ideas. If you had rationing, that had a big effect on your life, didn’t it? All your life.’

He was an usher at the Coronation, where he turned up in the wrong uniform. ‘I went to Moss Bros because I didn’t have a uniform and they made me a Commodore overnight by mistake.’

No-one noticed his faux pas, because, he said: ‘They were all drunk anyway. You had to get up at five in the morning to be on parade at Westminster Abbey at seven o’clock or something and they were all drunk.’

In later life, he concentrated on his family investment company EL Rothschild and on philanthropy, declaring: ‘I don’t think banking is as amusing as it was.’

One of his favourite causes was Elephant Family, a conservation charity he founded in 2002 with the Rajmata of Jaipur and Mark Shand, the late brother of the Queen Consort. Elephants, he opined, ‘are probably more intelligent than we are’. 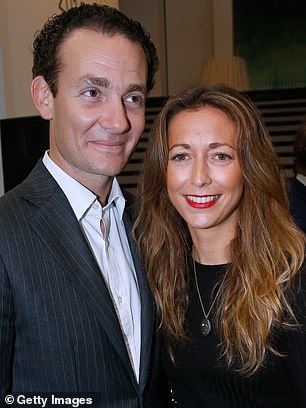 At the helm: Alexandre de Rothschild with his wife Olivia

Down the centuries the Rothschild dynasty, with an assortment of loosely connected banking and financial enterprises across Europe, has been wary of publicity.

The concern always has been of feeding the anti-Semitic narrative that Jews are the hidden controlling force in global finance.

Instead, the family has quietly developed a reputation for integrity.

The London branch of the empire was founded in the 18th century by Sir Evelyn de Rothschild’s great, great grandfather.

NM Rothschild famously raised the loans which helped the Duke of Wellington secure his victory over Napoleon at the Battle of Waterloo in 1815.

More recently, the fundamental question of the appropriate role of merchant banks such as NM Rothschild transfixed the Square Mile at the start of the Thatcher era in the 1980s.

But two Rothschild cousins, Evelyn and Jacob, had different visions of how the bank should operate.

Jacob, heir to the 3rd Baron and later to become master of Waddesdon Manor in Buckinghamshire, was the more adventuresome.

He felt that the bank needed to prepare itself for a new era of growth in the City through a merger with SG Warburg, which had developed a prowess in mergers and acquisitions and shown a willingness to move beyond advice to trading.

This was seen as too challenging by the family’s old guard. It was the more conservative Evelyn who marshalled the support of the dynasty and the City and saw Jacob off the field of battle.

With the assistance of veteran City trader Sir Michael Richardson, Evelyn set about taking advantage of the Thatcherite reforms, including the Big Bang in 1986.

The duo founded broker Smith New Court, which took the latter part of its name from the historic Rothschild headquarters on St Swithin’s Lane in the heart of the City.

In 1996 potential successor Amschel Rothschild tragically hanged himself in a Paris hotel room. So Evelyn set out to secure a succession at the London bank which didn’t involve his cousin Jacob, now Lord Rothschild. Instead, he reached across the Channel to Paris, and his French cousin Baron David de Rothschild.

The French Rothschild bank had suffered a huge setback when it was nationalised by president Francois Mitterrand’s government in 1984, forcing David to start out all over again.

But the weight, fame and trust of the Rothschild name, combined with David’s skill and ambition, brought the French bank back from the embers of socialism.

Evelyn saw a merger as providing a bridge into the EU as well as securing the succession.

Baron David took over as executive chairman when Evelyn retired in 2003 and set about bringing all the Rothschild banks under one umbrella, as Rothschild Continuation.

He even raised outside capital through a publicly quoted French vehicle.

The bank remains firmly under the control of the French arm with Baron David’s son Alexandre now at the helm.