By Chris Jewers For Mailonline and Afp

Pakistan blocked access to Tinder and several other dating apps on Tuesday in a bid to control ‘immoral’ and ‘indecent’ content.

The bans come just days after regulators threatened to shut down YouTube for similar reasons.

The Pakistan Telecommunication Authority (PTA) said it had barred users from accessing Tinder, Grindr, SayHi, Tagged and Skout after the social networking apps failed to ‘moderate… content in accordance’ with Pakistan’s laws.

The PTA said the ban addressed the ‘negative effects of immoral/indecent content’.

‘If adults choose to be on an app, it is not for the state to dictate whether they should use it or not,’ Ahmad told the AFP news agency.

He described the ban as ‘a completely ridiculous move’ that people would find ways to circumvent.

Tinder did not immediately return a request for comment from AFP.

Tinder (pictured, stock image), along with other dating apps, has been banned in Pakistan by the Pakistan Telecommunication Authority (PTA) in a bid to control ‘immoral’ and ‘indecent’ content

The PTA said the apps could request to have their blocks lifted if they show they are ‘moderating the indecent/immoral content through meaningful engagement’.

The regulator did not specify what it meant by that engagement, and added that the dating platforms did not respond to the PTA within a deadline set by the organisation.

It said ‘since the platforms did not respond to the notices within the stipulated time therefore the Authority issued order for blocking the said applications’. 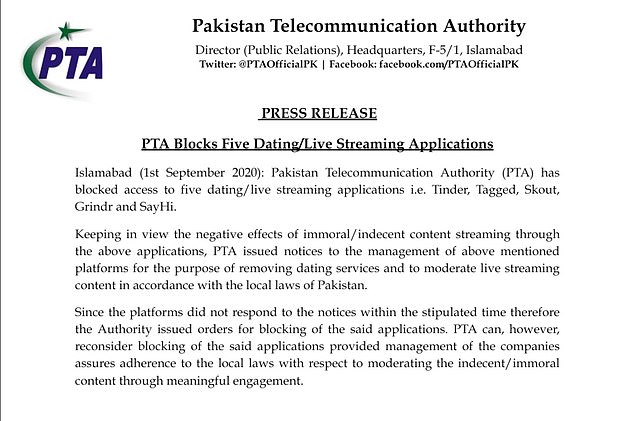 Last week, the PTA asked YouTube to immediately block all videos they consider ‘objectionable’ from being accessed in the country.

In a statement on Thursday, the PTA said it has asked YouTube to ‘immediately block vulgar, indecent, immoral, nude and hate speech content for viewing in Pakistan’.

The PTA claimed that viewing such content has ‘extremely negative effects’ and leads to ‘repugnant discord’.

The demand was criticised by rights campaigners who fear creeping censorship and control of Pakistan’s internet and printed media.

And in July, authorities issued a final warning to Chinese-owned social media app TikTok, ordering it to filter any obscene content.

The Muslim-majority country has several existing or proposed restrictions that target free speech, usually in the name of Islam or national security.