‘It makes me feel sick’: TikTokker with trypophobia divides opinion as he claims pictures of clustered holes are ‘wrong’ – while others insist they’re ‘satisfying’ to look at

A content creator has divided opinion after revealing that seeing images of holes makes him feel sick.

Ryan Ruckledge, from Blackpool, has more than 65,000 followers on TikTok, where he shares videos talking about various popular culture topics.

In a recent clip, he opened up about trypophobia, a condition which causes sufferers to have an adverse response to seeing images of small holes clustered together.

It means that visuals of objects such as beehives, sponges or crumpeys, cause some people to experience feelings of fear, disgust, anxiety, goosebumps, and panic.

However, others said they’re the opposite and find images of clusters of holes ‘satisfying’ to look at. 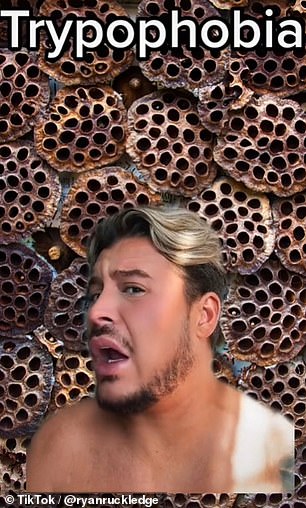 Sharing an image of a hand covered in holes, followed by an image of seed pods featuring clusterings of holes, Ryan revealed how the pictures make him feel.

Trypophobia refers to a strong aversion to seeing images of small holes, often tightly packed together.

These may include items like beehives, seed pods and sea sponges.

Upon seeing them, some people experience feelings of fear, disgust, anxiety, goosebumps, and panic

However, trypophobia is not currently considered a true phobia.

It is not listed as an official phobia in the DSM-5, the diagnostic tool of mental disorders published by the American Psychiatric Association, or its UK equivalent the ICD-11.

He said: ‘One phobia that I’ve got is trypophobia. Look at them. Just look.

‘Honest to God, I don’t know what it is, but them holes, all them little…it does does something different.

‘Just imagine running your finger over them, and I can’t even really look at it.

‘That is absolutely wrong, please, please!’

Looking at the images, he then made several retching noises, indicating that the photos were making him feel physically sick.

He concluded the video by asking viewers: ‘Has anyone else got this phobia or is it just me?’

His post divided opinion among viewers, with many people agreeing that such images of holes are toe-curling, but others saying that looking at the pictures is satisfying.

One follow trypophic wrote: ‘Omg is that what’s it’s called. Seriously makes me heave!! And then it’s even worse when they scrape them – makes me worse.’

Another agreed, writing: ‘Literally nearly passed out seeing this. I’m with you.’

And a third said: ‘I flinched throughout the whole video and had to cover my screen.’

A further TikTok user revealed: ‘Every time I see holes I cry because I have that phobia.’

Many commentators agreed with Ryan, and admitted that seeing the pictures of holes made them ‘flinch’ and even ‘cry’

However, not everyone had such a adverse reaction to the images, one person described looking at the images as satisfying, while others said they ‘loved’ it.

One respondent said: ‘I love this!! I am the opposite of fear with this.’

Another added: ‘I’m the opposite I love it.’

A further commentator agreed, adding: ‘I love this.’

And one wrote: ‘I’m the complete opposite I could look at all day long so satisfying.’

While many respondents agreed that images of holes freaked them out, others said they either didn’t mind the pictures, or actively enjoyed looking at them