A TikTok star who was allegedly sprayed with acid while livestreaming claims she was asked sinister questions on social media just before the attack.

Jenny Elhassan, 32, said a fake account demanded to know where she was before she was attacked outside Old Town in Haymarket, Sydney, on Friday.

Three masked men jumped out of a black car before one of them allegedly threw acid onto her and the group fled.

Ms Elhassan suffered burns to her right eye, forehead, and neck and was rushed to Royal North Shore Hospital.

‘I still remember when I was live streaming there was someone in my comments, a fake account, that was asking me where I was,’ she said in a TikTok video on Sunday.

Jenny Elhassan, 32, said a fake account sent her sinister questions before she was sprayed with corrosive liquid outside Old Town in Haymarket, in Sydney, on Friday

Ms Elhassan went on to recount her experience and believed God was looking down on her during the attack.

‘I do feel like God was watching down on me,’ she said in the video.

‘Number one: my daughter wasn’t with me, she was in my mother’s care. Number two: I was wearing sunglasses for some odd reason at 11 o’clock at night.

‘Number three: there was a paramedic onsite that was off-duty. Number four: my sister was telling me to wash my face. She knew exactly what was happening.’

The social media star did not address revelations she is a former in-law of one of Sydney’s most notorious underworld figures.

Ms Elhassan’s sister Alia was formerly married to convicted drug smuggler Steven Elmir, once regarded as one of Sydney’s most feared underworld figures. 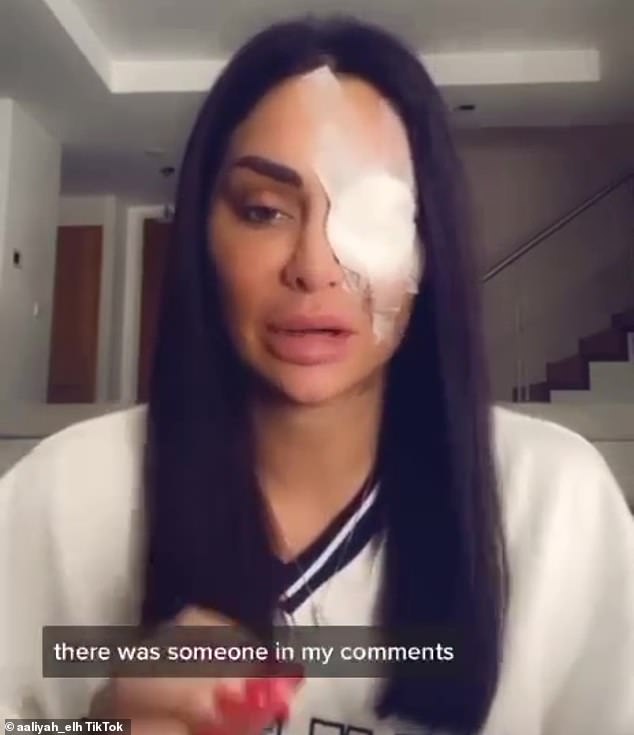 Elmir was sentenced to up to 24 years behind bars for his role in a conspiracy to import nearly two tonnes of illicit drugs from the Netherlands in 2017.

Known by the codename ‘Mr Worldwide’, he was one of nine men arrested over the sting which included Michael Ibrahim, the brother of Kings Cross identity John Ibrahim.

He spent two years in custody in Dubai for a ‘civil debt’ he was unaware of before he was extradited back home by Australian Federal police.

Elmir will spend a minimum 14 years behind bars and isn’t eligible for parole for another nine years.

It’s understood police are planning to question rapper Ali ‘Ay Huncho’ Younes over allegations he was involved in the attack on Ms Elhassan, the Daily Telegraph reported.

Younes was previously linked to the Alameddine family. 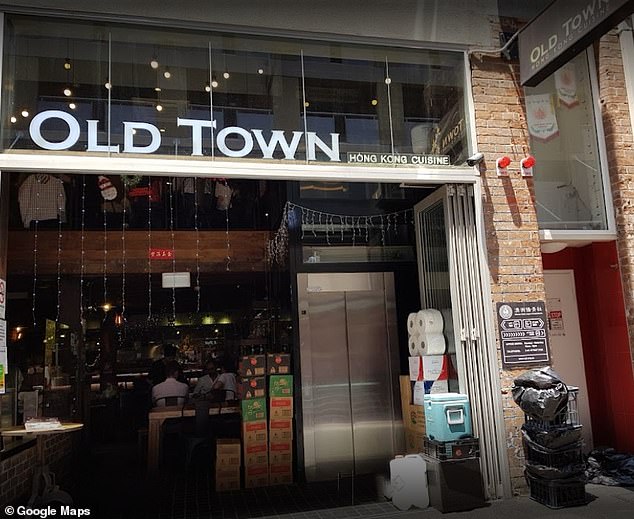 Three masked men then jumped out of a black car before one of them allegedly threw acid onto her and the group fled (pictured, Old Town at Haymarket in Sydney)

He was also reportedly close friends with Ms Elhassan and invested $200,000 into helping her establish her TikTok fame before a bitter falling out.

Younes, who is currently on bail for charges of affray, assault and participate in a criminal group has denied any involvement in the attack on Ms Elhassan.

His lawyer claimed police are yet to speak to Younes.

‘I have spoken to my client, he vehemently and strenuously denies any involvement in the terrible incident,’ Abdul Saddick told the publication.

It has also emerged Ms Elhassan isn’t cooperating with police as she doesn’t want her attackers punished, amid fears the incident may escalate.

‘In cases like this where the victim is reluctant to assist investigators it makes the job harder,’ Detective Chief Superintendent Darren Bennett said.

‘But we will get to the bottom of this public attack.’

The new details emerged after it was revealed Ms Elhassan had taunted an unknown person hours just before the attack, saying ‘I’m not scared of you… come for me’ 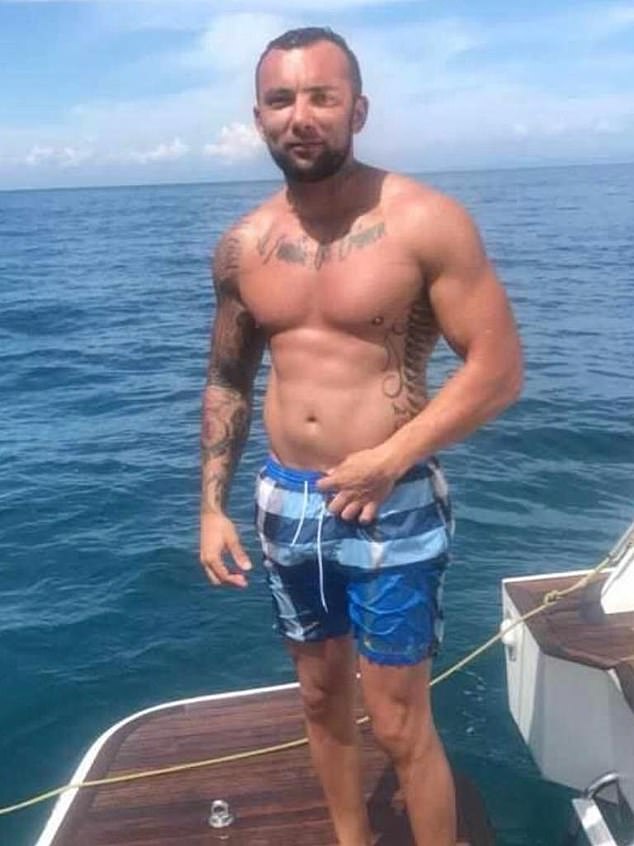 The eerie message from a clip filmed earlier that day, she talked about getting threatening phone calls and addressed a person directly.

‘Back off, back off I’m not scared of you. I don’t give a f***. I’m making sure everything is public. If you wanna come for me, come for me.’

In another clip filmed before she was attacked by three masked men who jumped out of a black SUV, Ms Elhassan said she had a ‘bounty’ on her head.

After being attacked at the Old Town Hong Kong restaurant in Haymarket at around 11pm on Friday, she was rushed to hospital with burns to her right eye, forehead and neck.  .

Before the incident Ms Elhassan also posted another clip containing a recording of her speaking to a police officer, who confirmed ‘they are coming after you’. 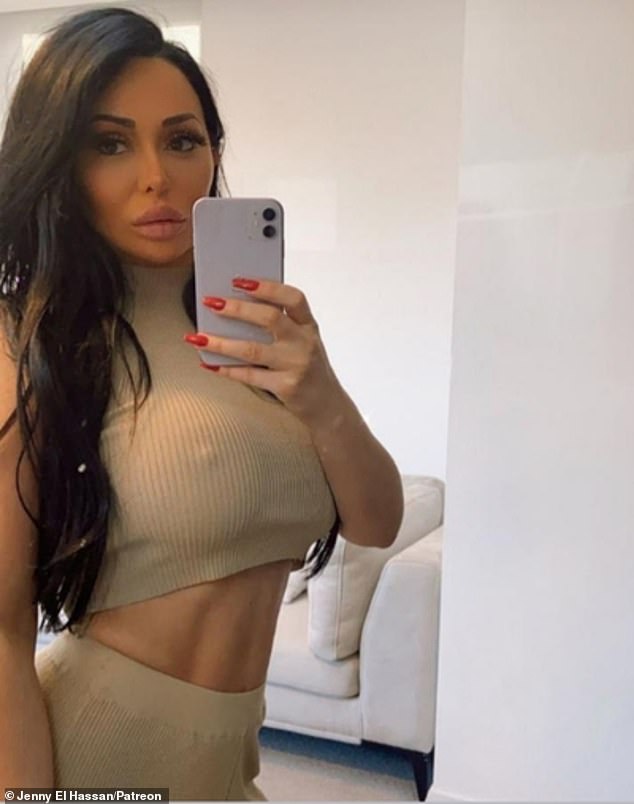 A TikTok star claimed she was threatened with ‘an attack’ if she did not delete a podcast naming a man before acid was sprayed in her face in a terrifying ambush.

He also warned her to stay in busy public areas for her own safety.

‘While I was streaming someone came into my life and told me I better take the podcast down of [his] name or there is going to be an order on me,’ Ms Elhassan said in a video before the ambush.

It understood the ‘order’ was a targeted attack which may have been arranged for a payment, but the young mum refused to remove the post she was threatened over.

‘Get the po po’s [police] involved, get the lawyers involved get the prime f***ing minister involved, nothing is going to stop me.’ 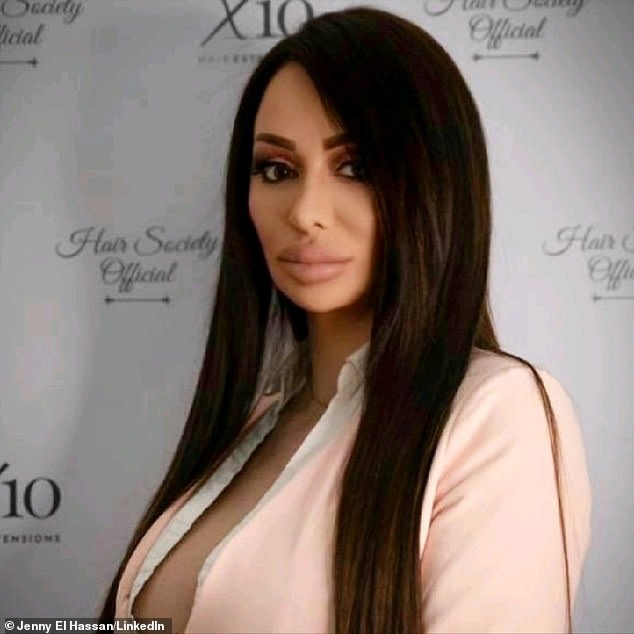 Daily Mail Australia can reveal that Jenny Elhassan detailed the threat in a video prior to the horrific incident which saw her rushed to hospital with burns to her right eye, forehead and neck late on Friday night 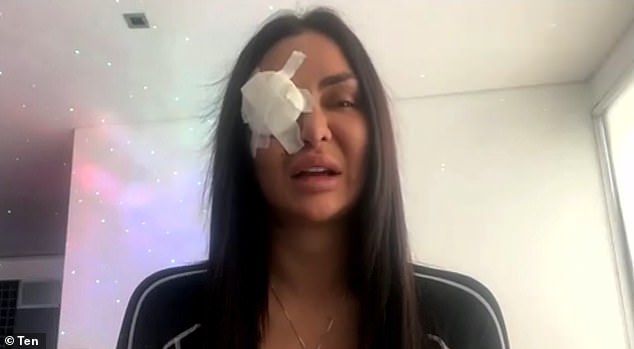 Jenny Elhassan, the young mother who had acid thrown in her eyes on Friday, admitted she knows the identity of at least one of her attackers but didn’t want to name them

Ms Elhassan added that she would take the man to court if the ‘order’ was carried out – to ‘make sure you have nothing’.

A far more subdued Ms Elhassan broke her silence on Saturday, hours after a man threw acid in her face, admitting it would be ‘better for me’ if she did not escalate.

‘I feel like I just want it to blow over, I don’t want anything to escalate,’ she told Channel Ten.

‘I feel like if I just let it blow over it will be much better for me.’

The young mother said she knew the identity of at least one of her attackers but didn’t want to name them. 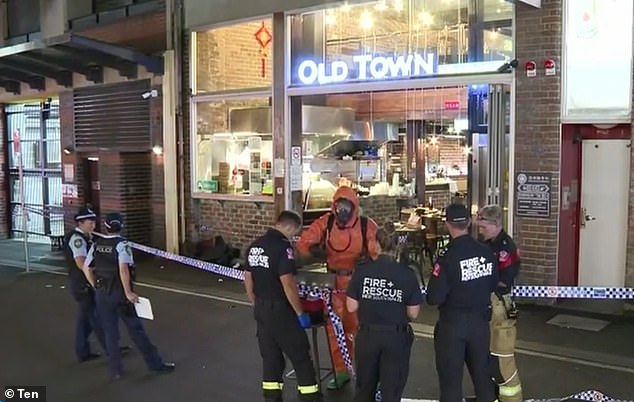 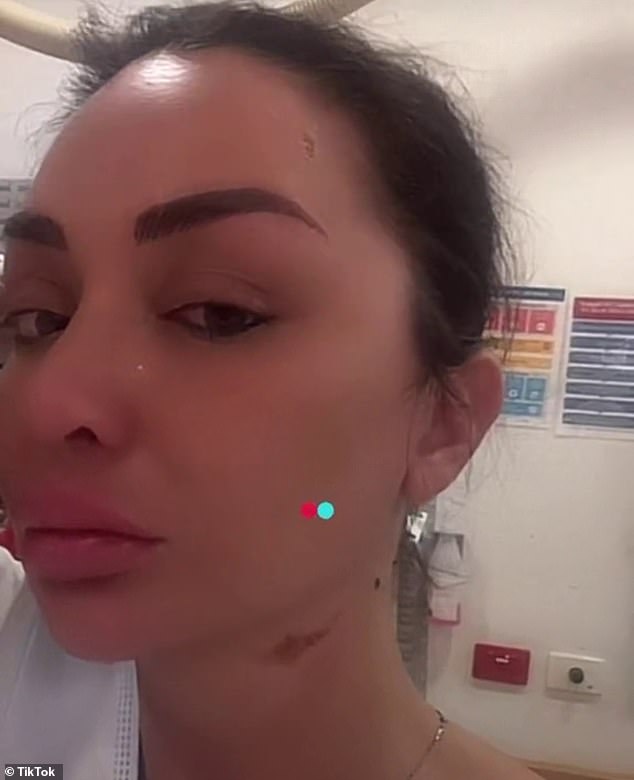 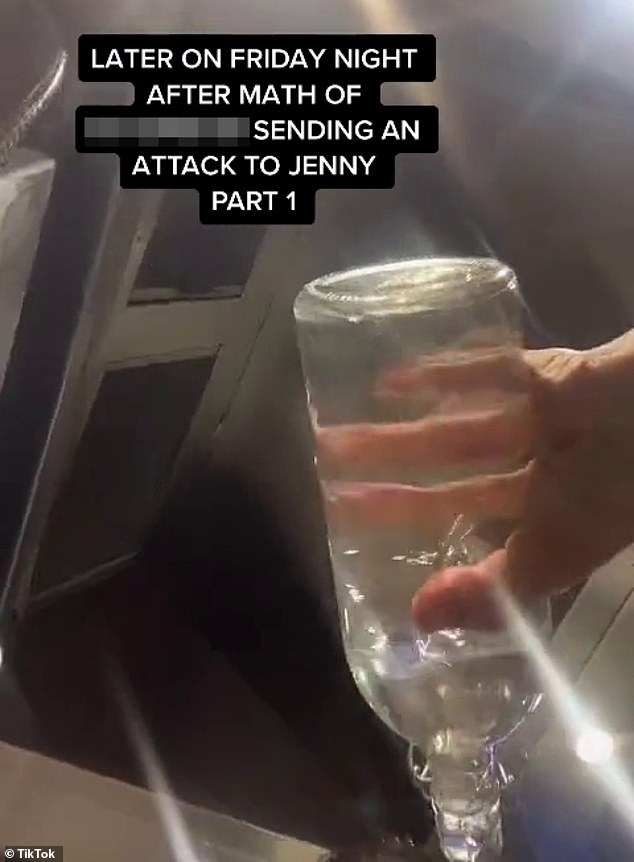 Police confirmed a HAZMAT crew attended the scene at 11.15pm and the woman was taken to Royal North Shore Hospital for treatment of facial injuries.

The day after the attack she showed burn marks on her face and neck and in another video described the excruciating pain in her right eye.

‘I still feel like there’s a knife stuck in my eye,’ Ms Elhassan said.

She also added that she was relieved her six year old daughter did not witness the horror unfold, and believes her eyes were only saved by her designer sunglasses.

NSW police are on the hunt for three men who fled along Dixon Street.

The vicious attack was captured in her livestream, in which she is heard screaming for water seconds afterwards.

She also claimed to have needed mouth-to-mouth resuscitation administered by her sister, Alia, for 10 minutes because she passed out from the acid attack. 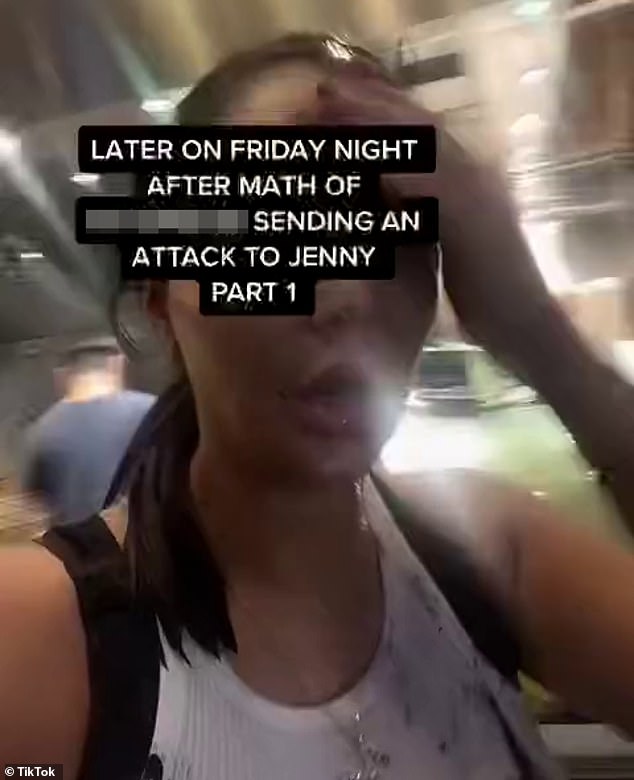 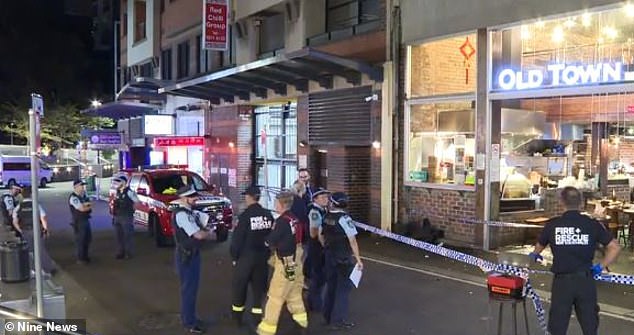 Jenny Elhassan, 32, was dining at the Old Town Hong Kong restaurant on Dixon Street at Haymarket, in Sydney, at 11pm on Friday

Footage shows Ms Elhassan howling for water and begging for help from her terrified sister.

Restaurant staff handed Ms Elhassan bottles of water before she poured the liquid over her face.

Ms Elhassan filmed another video in her hospital bed showing the extent of damage to her face with burn marks on her neck and above her eyebrow.

She said she was wearing sunglasses at the time, but the ‘black acid’ still managed to get into one of her eyes. 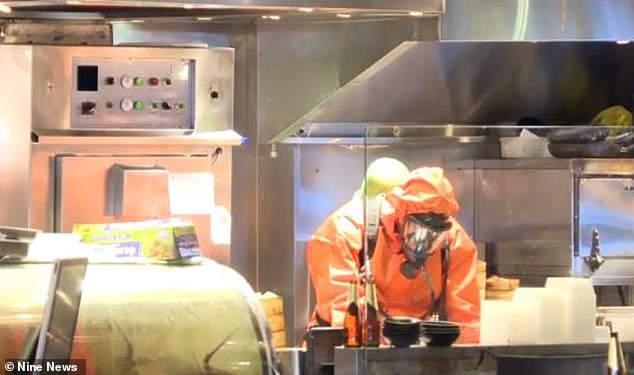 NSW Ambulance inspector Andrew Bibb said: ‘When paramedics arrived, this patient was very distressed and appeared to be struggling to breathe.

‘Her face was quite swollen as a result of the chemical substance which was also impacting her vision.

‘A chemical burn to any part of the body is extremely concerning let alone to a person’s face.

‘Of all the injuries paramedics attend, burns can be the most painful and difficult to manage.’