The guy with a swoosh on his shirt and a Tiger head cover on his driver looked pretty good.

So did Tiger Woods.

Charlie Woods, the 11-year-old son of the 15-time major champion, made his national TV debut Saturday in the PNC Championship. And according to his dad, he played just like he does at home.

Never mind that he had some 250 people following along, more than his dad had watching him at the Masters. Charlie confidently twirled his club before shots, quickly picked up the tee on his drives and even pumped his fist on the par-5 third hole with a 3-wood into 3 feet for eagle. 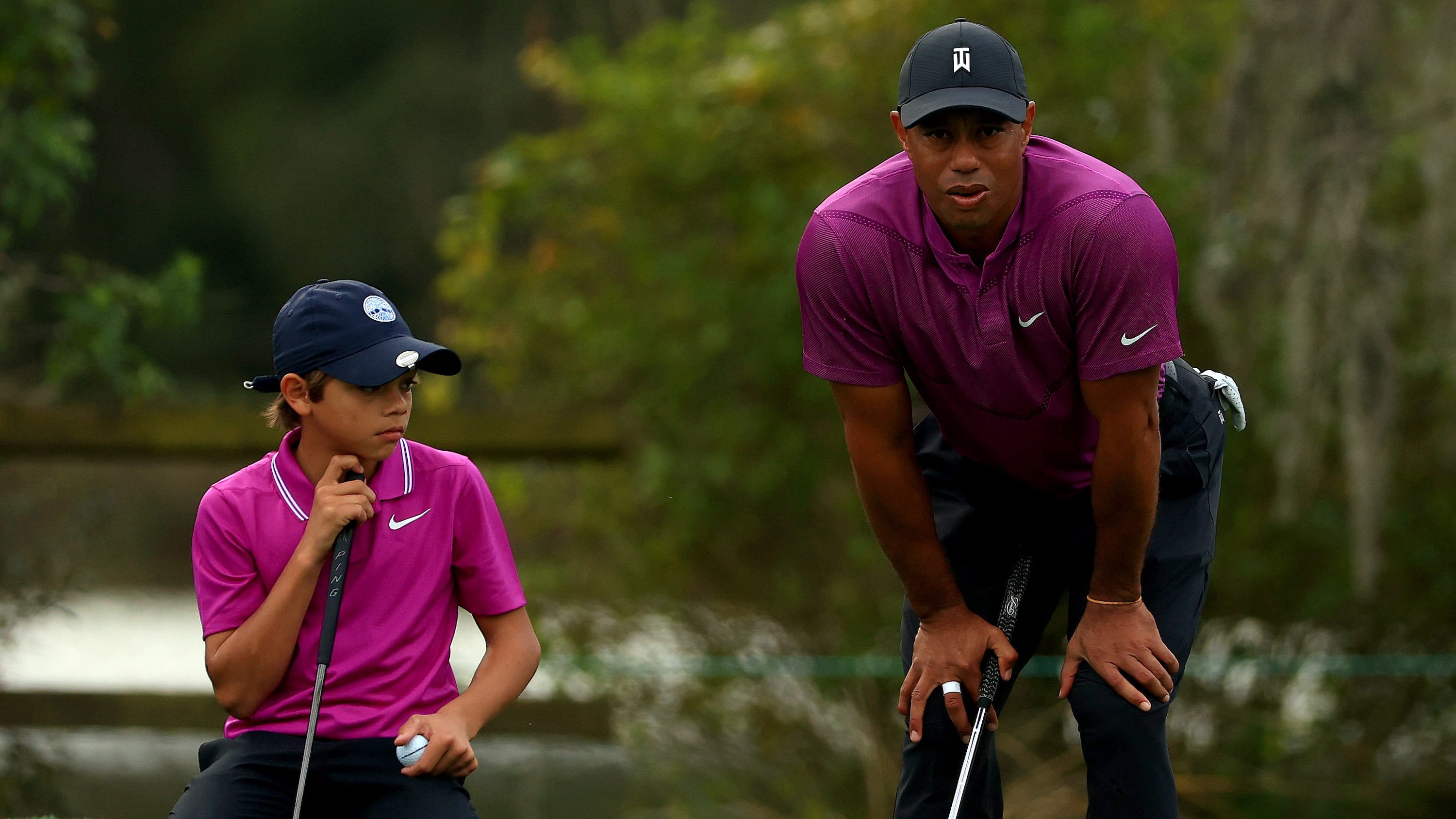 11-year-old Charlie Wood and his golf legend father, Tiger, shoots 10-under 62 in the 1st round of the PNC Championship. 2:01

They finished the scramble format at 10-under 62, four shots behind Matt Kuchar and son Cameron in Orlando, Fla.

“I don’t really care about my game,” Woods said. “I’m just making sure that Charlie has the time of his life. And he’s doing that.”

Charlie Woods is the youngest to play in this 36-hole event that began in 1995 for major champions and their sons, and now includes all family members. He loves the game enough to start playing in a few junior events, and he had no qualms playing before a crowd or the cameras.

11-year-old Charlie Woods hits an excellent approach shot then sinks the first eagle of his career on the 3rd hole at PNC Championship. 0:35

A television camera was position some 15 feet away to the right of Charlie on the opening tee at The Ritz-Carlton Club at Grande Lakes, and he was a little quick with his swing, pulling it to the left. They used his father’s tee shot and wedge into two feet — Charlie made the birdie putt.

That was the last time Team Woods used Tiger’s tee shot on a long hole until No. 15. It helped that the 11-year-old was able to use a forward tee, 100 yards ahead of the PGA Tour players on some holes.

Woods was not surprised from what he’s seen at home. This was different — a tournament with pros, a scorecard that had to be signed, a television audience. But it sure looked the same.

“I’ve seen this all along. Probably not a lot of people have,” Woods said. “A lot of the shots he hit, I’ve seen them back home at The Medalist this entire year. The junior events he played in, he hit a lot of these. It was a matter of stringing these out for 3 1/2 hours. It’s a totally different deal.”

WATCH | Matt Kuchar and his 13-year-old son, Cameron, hold lead after 1st round: 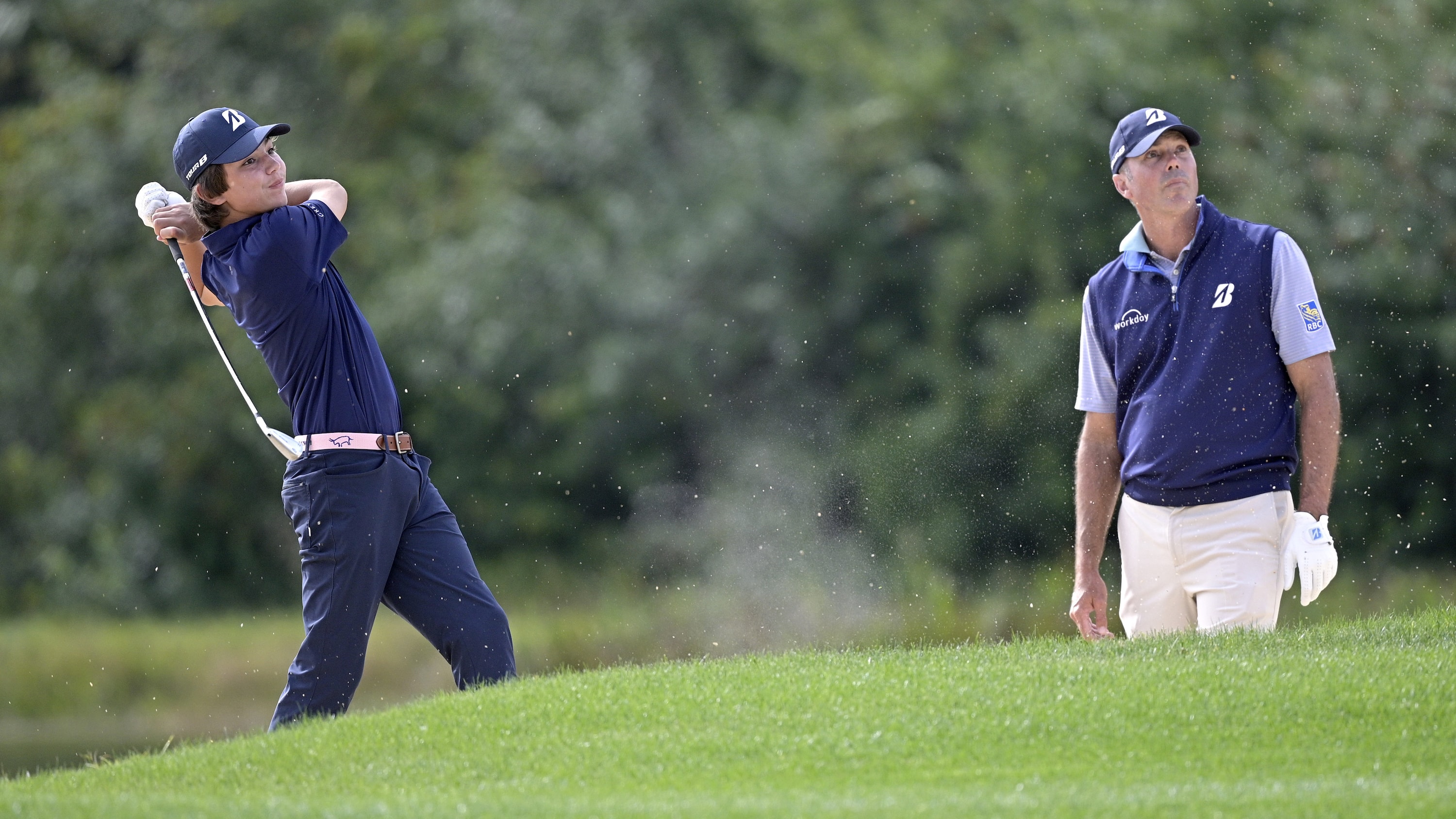 American Matt Kuchar and his 13-year-old son, Cameron, hold the lead after the 1st round of the PNC Championship at 14-under. 0:57

The swing was smooth. The mannerisms were familiar. Charlie belted one on the par-5 fifth hole, bending over to grab his tee while the ball was still in flight. Justin Thomas, playing in the group with his father Mike, smiled and said, “God, you are so much like your dad.” Waiting for Thomas to putt, father and son stood side-by-side, right leg crossed over left ankle.

The Woods’ were 8 under through nine holes, capped off by Charlie making an 8-foot birdie putt on No. 9 and walking it in when the ball was a few feet away. Just like Dad.

The kid had game in other ways, too.

During the pro-am, Charlie hit one through the fairway into the trees. Mike Thomas, a longtime club professional whose specialty is working with juniors, was in the group ahead and playfully left a note next to Charlie’s ball that said, “Draw Hole!” On Saturday, Mike Thomas hit his drive into a bunker on the short par-4 13th.

“In typical Woods’ fashion, he kept the paper,” Justin Thomas said. “My dad hit in the bunker, and he took that exact paper and put it behind the ball. So a little karma there.”

Justin Thomas spends a lot of time with them at home, so he knew how the kid could play. Even so, Thomas said he a different kind of nerves — for his dad and for Charlie.

“I knew he was going to wow a lot of people,” Thomas said. “It was cool to see him shape the ball both ways and hit great shots. We feel probably what our parents felt growing up watching us play. You want them to do well, but you can’t do anything about it.

“It was competitive, it was joyful, it was memorable and we had some banter.”

And they get one more day.

They finished with a birdie on the par-5 18th — across the water left of the fairway, a small group of people posted a banner on the bridge that said, “Charlie Woods Fan Club — and were tied for sixth.

“The kid’s a gamer. He’s a grinder. He’s competitive. But he’s so young,” Justin Thomas said. “I’m pulling for him. I want him to keep it fun, keep it light. It can get nasty out there with what people say. Expectations are going to be high, but I hope it remains manageable for himself. I hope he stays within himself.

“There’s 11, 12, 13-year-olds sitting on their couch at home that can’t hit those shots on the range. And he’s doing it in front of a crowd and on national TV.”