Tiger Woods should’ve brought his swim trunks to the final round of the Masters.

The defending champion knocked three balls into the water at the par-3 12th hole, a stunning turn at the shortest hole on the course.

Last year at the very same hole, Woods got a huge break on his way to a fifth green jacket when four of his competitors dumped shots into Rae’s Creek.

This time, it was Woods who fell apart at Golden Bell.

His tee shot rolled back into the water, then he dunked another in similar fashion after taking a drop. Woods pitched his next one over the green, into a back bunker, leaving him with an extremely awkward stance for what was officially his sixth shot. He lined that one into the water as well.

I have been informed that Tiger Woods’ 10 at No. 12 is his highest score on any hole in his PGA Tour career.

Finally, Woods finished off a septuple-bogey 10, his worst score ever at the Masters. Previously, he had made 8s on a pair of much longer holes. 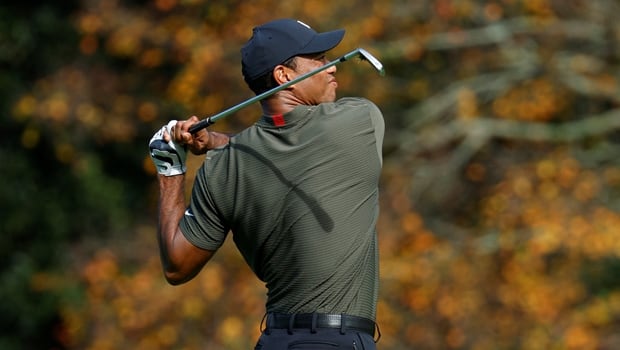 Tiger Woods almost hit a hole-in-one on the 16th hole, part of his 4-under 68 first round at the Masters which had him tied for fifth place as play was suspended due to darkness. 0:51