In the North West — which was the centre of England’s second wave — coronavirus hospitalisations peaked on October 26, when the average number of admissions over the previous seven days peaked at 308.4 per day.

This has since fallen 13 per cent to 267.1 per day in the seven-day spell to November 12, the latest date for which data is available.

In the Midlands — where swathes were placed under tough Tier Three restrictions — hospitalisations peaked on November 11, when their seven-day average reached 382 admissions per day. It had fallen to 377.4 the following day.

And in the North East and Yorkshire the highest number of hospitalisations was recorded on November 10, when 464 people were admitted with Covid-19. This had dropped to 376 on November 15.

Although the average hasn’t been calculated for the other days, each has lower admissions than the day before suggesting the figure will continue to drop.

The public was told a national lockdown was the only way to protect hospitals and get the epidemic under control following a surge in infections in early autumn.

But the latest hospital data suggests the tiered approach would’ve achieved this without the need for a detrimental and crude shutdown.

Government data shows hospital rates for Covid-19 have started to fall in the North West, North East and the Midlands 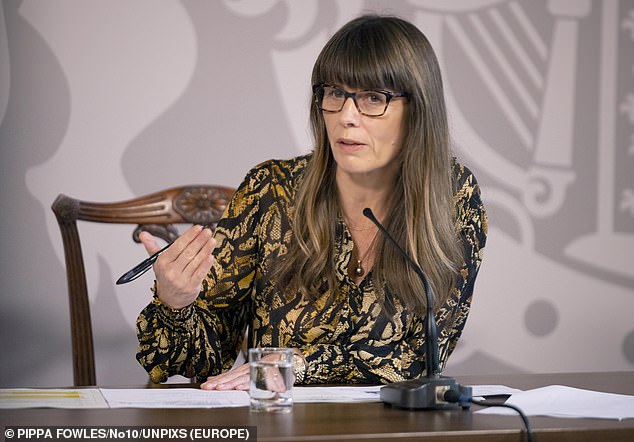 Dr Susan Hopkins, a senior doctor at Public Health England, said it was ‘good news that some parts of the country have already flattened off’

The promising hospital data was revealed in graphs wheeled out at today’s Government press conference.

Dr Hopkins, explaining the graphs, said: ‘What you see is, even before national restrictions were brought in, in the parts of the country where the amount of infections was already very high the progress of the epidemic had already flattened off – that’s the North West and Yorkshire and Humber.

Dame Angela said she was also confident the tiered approach was behind the drop.

She said: ‘When I look at the North West and the North East, when I look at what’s happened with the ONS surveys there, I see interventions that have worked, I see epidemics that are flattening. There is some good news there.’

Hopes for a lockdown-free Christmas were given a major boost today as the daily number of coronavirus infections and deaths fell by 15 and 11 per cent in a week and Boris Johnson said his priority was to reunite families over the festive period.

It is hoped the week-on-week drop signals the national lockdown is starting to take effect, after getting off to a rocky start last week when infections continued to climb despite the tough curbs. Last week’s spike is thought to have been caused by Brits rushing to pubs and restaurants for a pre-lockdown blowout.

Meanwhile, the Prime Minister said today it was his ‘desire to try and allow loved ones to have Christmas together’ after a tumultuous year that has seen families kept apart for months on end.

Ministers are said to be thrashing out plans to free the country from lockdown shackles for five days between December 24 to 28 and allow family ‘bubbles’ of up to four households to gather indoors for festive celebrations.

Speaking at a Downing Street press conference today, Public Health England’s top doctor Susan Hopkins said she believes ‘it is possible’ – though she warned that for every day measures are loosened, it will require five days of tighter restrictions to reverse the damage.

It could mean spending 25 extra days in some form of lockdown and scrapping New Year celebrations if Boris’ Christmas plans are given the go-ahead.

However, one Tory MP warned today it would be better for the Prime Minister to cancel Christmas and be branded the ‘Grinch’ rather than risk a spike in Covid-19 deaths that could paint him as the ‘Grim Reaper’. They said: ‘He’s going to be blamed for it (a rise in deaths). It is always in mid to late January you get the NHS winter crisis.’

Scientists now accept that Tier 3 – and to a lesser extent Tier 2 – was driving down the epidemic.

Tier 3 saw pubs shut and people prohibited from meeting indoors – but restaurants, shops and gyms could stay open, which made it far less restrictive than a full lockdown. Tier 2 also banned indoor meetings but pubs could stay open with a 10pm curfew.

Despite the advisers throwing their support behind Tier 3, there are rumblings of a revamped four-tier system when England finally comes out of its national shutdown on December 2.

The tightened rules could see pubs forced to stay shut and a new 9pm alcohol curfew in Covid hotspots.

It comes after an eminent scientist told MailOnline the benefits of England’s second lockdown may have been nullified due to Number 10’s decision to announce the intervention five days before enforcing it.

Boris Johnson revealed the country was retreating back into a national shutdown on October 31 to ‘reset’ the epidemic and give hospitals extra breathing room heading into winter – but the measure did not come into effect until November 5.

The UK Government was forced to announce the second lockdown on Halloween after news of the intervention was leaked to newspapers the night before. It is unclear when Mr Johnson had planned to break the news officially.

But it led to a frenzy of Brits rushing to pubs and restaurants for a pre-lockdown blowout that has been blamed for a slight uptick in new Covid-19 infections and hospitalisations.

Professor Paul Hunter, an epidemiologist at the University of East Anglia, said the increase in social interactions had fuelled a mini-Covid resurgence after weeks of plateauing infections. He fears the entire month-long lockdown will be spent undoing the damage caused by the five-day delay.

Professor Hunter told MailOnline: ‘Both case numbers in UK (which had levelled off pre-lockdown) and hospitalisations in England (which were starting to level off) have surged again.

‘I can’t think of what else could have driven this surge than increased social mixing in the five days before lockdown two.

‘I doubt we will see declines as rapidly as during April/May, so it may well take the most/all of this lockdown to reverse the impact of this pre-lockdown surge on cases and hospitalisations.’

Professor Hunter said whoever leaked the lockdown from inside Number 10 ‘will have contributed to a proportion of the unnecessary cases, hospitalisations and deaths’.

Average daily Covid-19 infections in the UK almost doubled during October, rising from about 11,000 a day at the beginning of the month to 20,000 by October 23.

But they had started to flatline in the last week of the month, rising to just 22,500 by October 31, when the second national lockdown was announced.

Many scientists, including Professor Hunter, believe the deceleration was the result of the tiered lockdown scheme taking effect.

After nearly a fortnight in lockdown, experts would expect infections to have started to fall – yet there are now more than 25,000 every day. Professor Hunter believes this is the aftermath of the five-day blowout.

But the lag in time it takes for a Covid patient to fall critically ill with the disease means the effect of blowout on deaths and hospitalisations may only start to feed into the data now.

Professor Hunter said he was ‘shocked’ when the second lockdown was announced because the tiered system appeared to be working, particularly in Tier 3 areas and to a lesser extent in Tier 2.

He added: ‘I clearly don’t know for certain how the epidemic would have progressed without this lockdown, but if it had plateaued then we would not have seen much of a decline but certainly not the rapid and continuing increase that was being predicted a few weeks ago.

‘We saw in March/April (in the first lockdown) that case numbers and hospitalisations declined much more slowly then they had increased. [It is] difficult to be certain for case numbers because of [the] inadequate availability of testing.

‘We then had to wait 52 days before daily hospitalisations fell below 586. So roughly four weeks of lockdown to reverse one week of pre-lockdown growth.

‘So, this time around I doubt we will see declines as rapidly as during April/May.’