Challenger business account provider Tide has come in the firing line from angry customers who have been unable to make card payments in recent days.

Tide, which boasts of more than 400,000 customers having only launched six years ago, warned of ‘essential maintenance’ and in an update yesterday, said cards should be working again.

However, many have taken to social media website Twitter today stating they are still unable to use them.

Tide had told customers to ‘use alternative payment methods’ while the maintenance was taking place.

Frustrated customers have taken to Twitter to vent their anger with Tide bank which has left them without the use of their cards for three days.

According to the status page on Tide’s website, all card services resumed at 17.15 yesterday.

But this morning the page reports an ‘unresolved incident’ requiring additional work. It appears this has caused further service outages for card users.

Stranded customers who are unable to carry out any transactions with their Tide cards have taken to social media to voice their frustration with the service and customer care they are receiving. 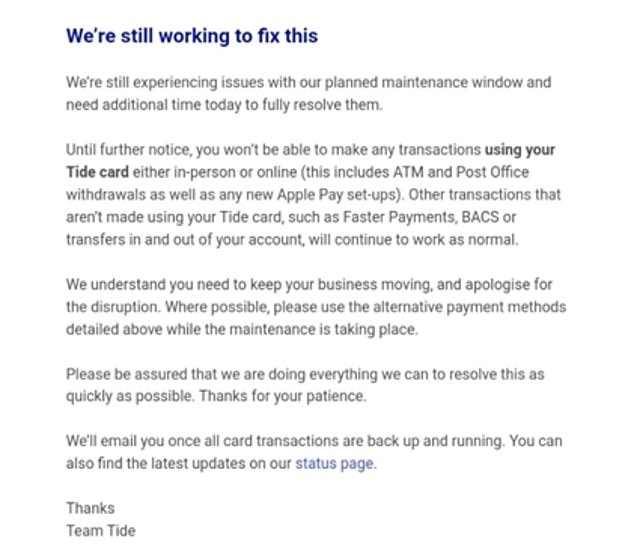 Twitter user Frankie Attwater took to the site this morning to vent about the ongoing issues, labelling the service from Tide ‘disgusting’ and asking about coverage of the loss of earning resulting from the inability to conduct business transactions.

The SME Club, a free and independent resource for UK small and medium businesses, similarly criticised the bank on the social media site questioning why Tide opted to carry out the maintenance during business hours and saying that they would no longer recommend the bank to their members.

In response the bank simply said they were unable to confirm when the services would resume but they were ‘doing everything to resolve it as soon as possible’. 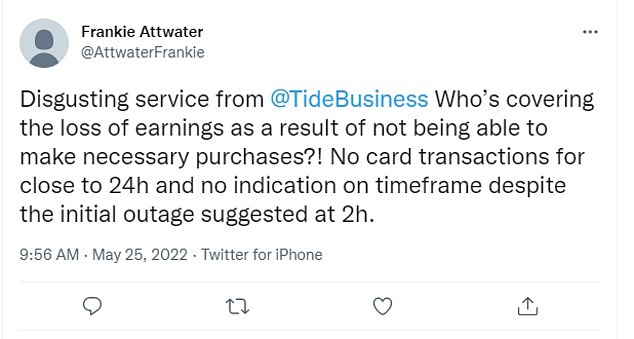 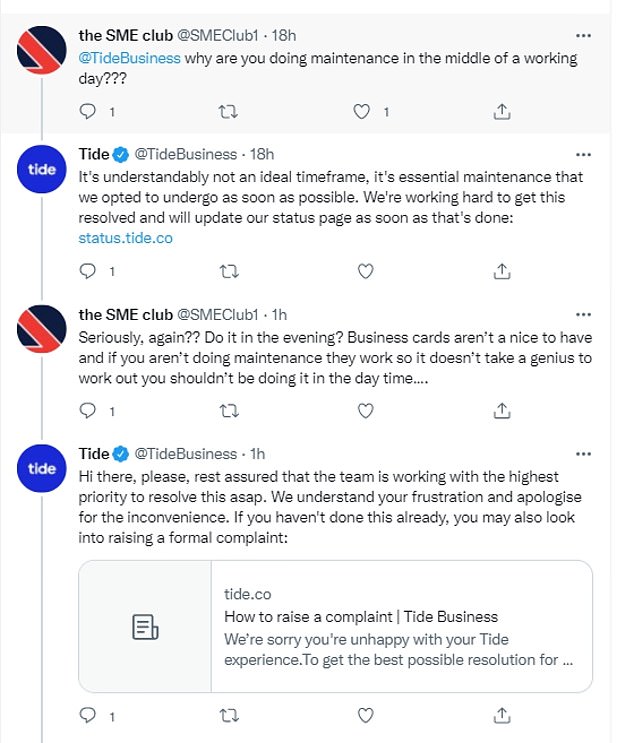 The SME Club is a national club operating to support, advise and connect all UK small & medium businesses 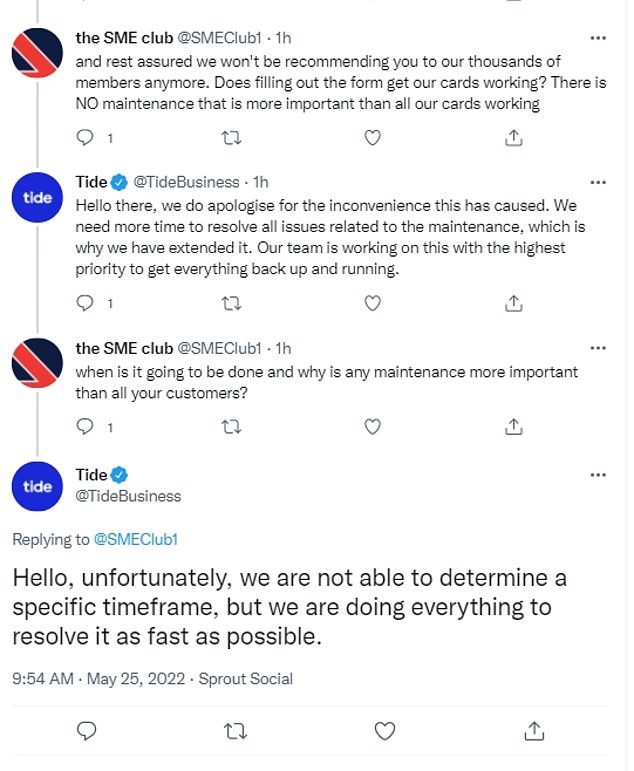 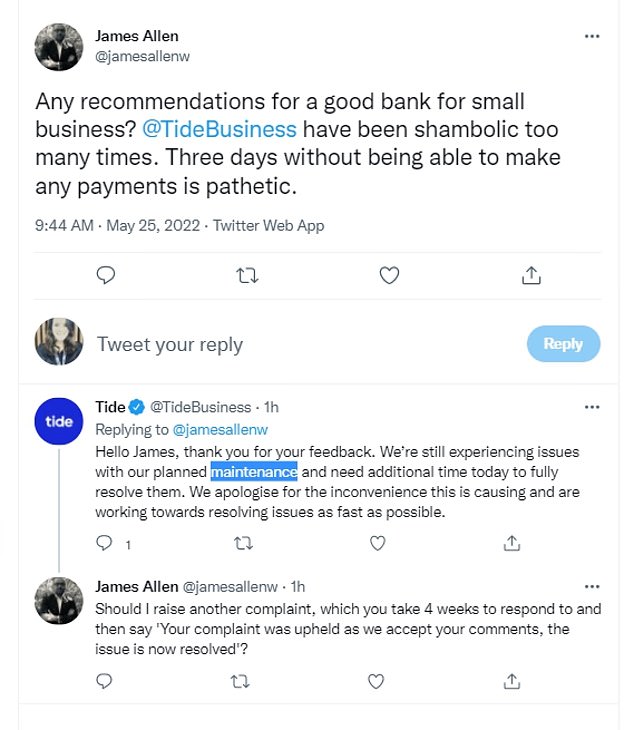 Tide bank has over 400,000 customers accounting for around 7% of the UK’s SME market 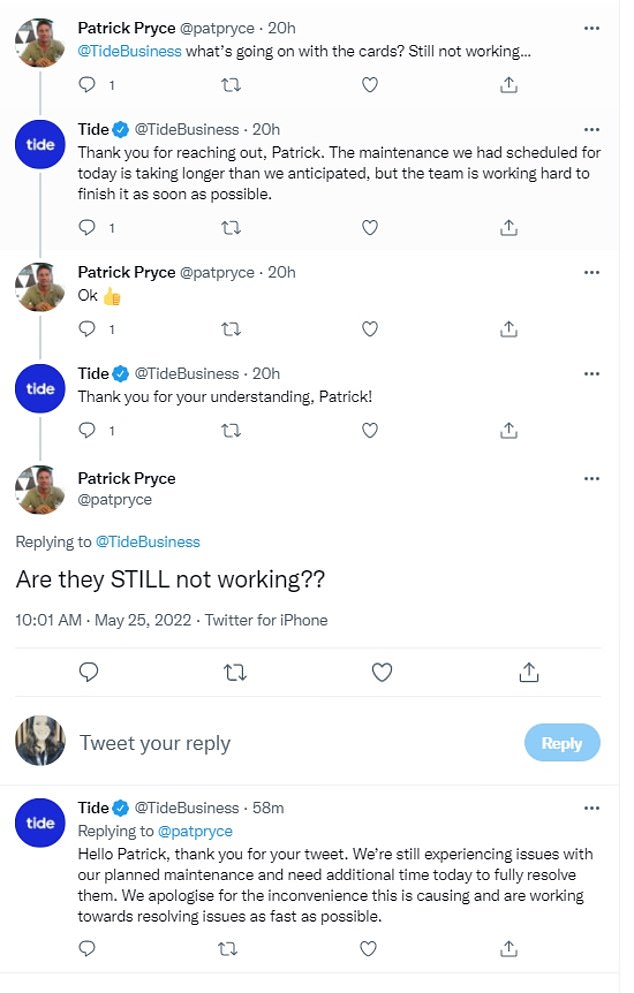 Posting on Twitter James Allen said the bank has been ‘shambolic many times’ and in the past has taken month to respond to complaints.

He used his public account to ask for recommendations for alternative small business banking providers.

And Patrick Pryce who yesterday appeared to accept Tide’s rationale for the outage, returned to Twitter to question why services were still down this morning.

Again the bank’s social media account apologised for any inconvenience caused and said the team was working to resolve the issue. 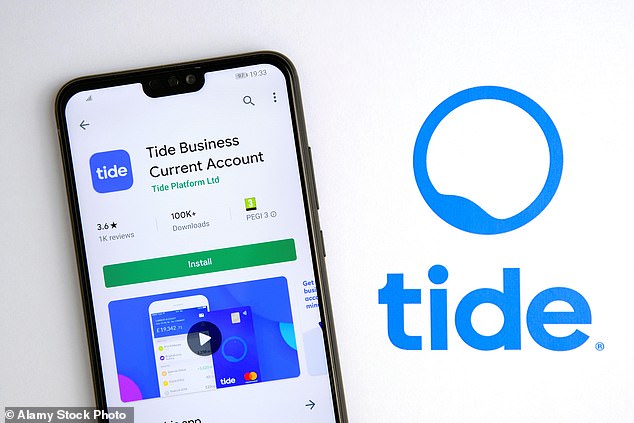 A new bank on the block

Tide is now the 7th largest provider of banking services to small and medium sized businesses in the UK.

It doesn’t have a banking licence and instead relies on partner Clearbank.

The business provides business current accounts and smart financial admin services to over 400,000 small-business owners through its mobile-first platform.

The Government has been keen to boost competition in the SME banking space and believes that challengers without legacy IT systems would be the way.

In 2019, Tide picked up 16 per cent of the of the £775million RBS Alternative Remedies Package – a government initiative set up to bolster competition in the business current account market after the state-backed bank scrapped plans to sell off its 300-strong Williams & Glyn branch network.

Has your business been impacted by the Tide service outage? Get in touch: editor@thisismoney.co.uk