A three-year-old child died after its desperate mother spent more than an hour on hold to the NHS 111 helpline.

The ill child suffered a cardiac arrest at its home and died in hospital, according to details of critical incidents affecting children in London amid the coronavirus crisis.

Another case saw a six-month-old die from sepsis and liver failure because the parents feared the child could catch Covid-19 in hospital, the Evening Standard reports.

According to the latest figures, 12,868 patients have died in hospital after testing positive for coronavirus in the UK as of 5pm on Tuesday, up by 761 from the previous day.

England’s chief medical officer Professor Chris Whitty warned of a possible ‘bounce’ in the numbers when the next set of figures are released due to delays in reporting deaths over the Easter weekend.

He said that while the UK was ‘probably’ reaching the peak of the epidemic, the high numbers of deaths were expected to continue for a ‘short while’ to come – and warned of the possible knock-on effects the pandemic will have on the NHS, with potentially fatal results.

Doctors have raised concerns that parents are not seeking treatment for their children amid the outbreak.

The ill child suffered a cardiac arrest at its home and died in hospital, according to details of critical incidents affecting children in London amid the coronavirus crisis

Chief executive of NHS England Sir Simon Stevens has urged parents not to delay going to the hospital.

The two child deaths are among 14 incidents in a coronavirus ‘incident log’ drawn up by North Thames Pardiatric Network.

Others cases involve treatment being delayed after parents were given incorrect advice due to the NHS helpline and London Ambulance Service being overstretched, reports indicate.

One case involved the mother of a four-year-old calling for an ambulance ‘on multiple occasions’, and was ‘seen by paramedics and advised to stay at home’. 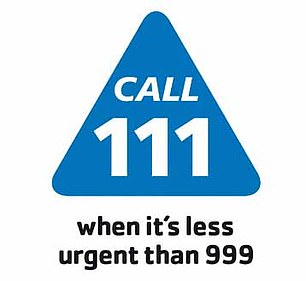 The log continues: ‘When child semi-conscious and vomiting could not get ambulance as too busy. Advised to bring child in herself.’

The child, which was later discovered to have septic shock and a ruptured appendix, survived.

The log for the incident involving the thee-year-old child states: ‘Mum on phone to 111 for [more than] 60 minutes. Waiting for answer to call. Child arrested while mother on the phone. Mum had been to GP with seven-week history of headache and vomiting.’

The log for the six-month-old baby, who died in hospital from sepsis and ‘fulminant [sudden] liver failure’, states: ‘Unwell five days. Parents did not bring in as risk in hospitals of Covid.’

NHS England told the Standard all serious incidents would be investigated, and NHS London said parents must not hesitate in seeking medical support.

The revelation comes as Britain’s coronavirus death toll jumped by 801, taking the total numbers of victims to almost 13,000.

The Department of Health has yet to announce the official daily tally from all four of the home nations.

NHS England announced 651 more COVID-19 deaths, including a 20-year-old who had no known underlying health condition.