Police have charged three teenagers after a care worker who ‘stepped in to save his 11-year-old son from teenage bullies’ was beaten in a park.

Alan Willson, 46, had ran from his home in Worthing, West Sussex, to nearby Longcroft Park when he heard a group were throwing his son to the floor on Easter Sunday this year, previous reports revealed.

But when he tried to step in he was knocked unconscious before his head was hit with an object as his horrified son watched.

The father suffered lung trauma, broken bones and fractures to his spine – and had to have surgery on his brain in Royal Sussex County Hospital, Brighton, where he remained in a coma following the incident in the evening of Sunday 4 April.

After months in hospital, he is now ‘continuing his rehabilitation in a specialist facility’, Sussex Police say.

Three teenagers, aged 14, 15 and 17, have now been charged in relation to the assault.

Police said in a statement: ‘Three youths, all boys, who cannot be named for legal reasons, were arrested shortly after the assault and released on conditional bail while police carried out their enquiries.

Alan Willson, 46, (right) sprinted from his home in Worthing, West Sussex, to nearby Longcroft Park when he heard a group were throwing his son to the floor on Easter Sunday, previous reports revealed

‘The Crown Prosecution Service has now authorised charges of inflicting grievous bodily harm with intent. The three boys, aged 14, 15 and 17, are due to appear before Worthing Youth Court on October 7.’

Mr Willson’s wife Annie, 49, had described how her husband was ‘fighting for his life after brain surgery for multiple bleeds on the brain’ following the incident.

In a post online, she said he is the most kind and gentle man in the world’.

Detective Inspector Simon Dunn, who is leading the investigation, said: ‘I’d like to thank everyone who has come forward to support our investigation so far.

‘I’d also like to thank the victim’s family and the wider community for their support, patience and cooperation while we have carried out extensive enquiries in relation to this matter.

‘We will continue to support the victim and his family as the case progresses.’

A statement released by the victim’s wife says: ‘I am so grateful to everybody for their well-wishes and donations in the weeks and months following the assault on my husband. We have been overwhelmed and touched by the kindness and generosity people have gone out of their way to show to me and my family.

‘I would like to thank the medical staff who did such an amazing job looking after my husband in hospital, and my children for being so supportive at what has been such a difficult time for us all. 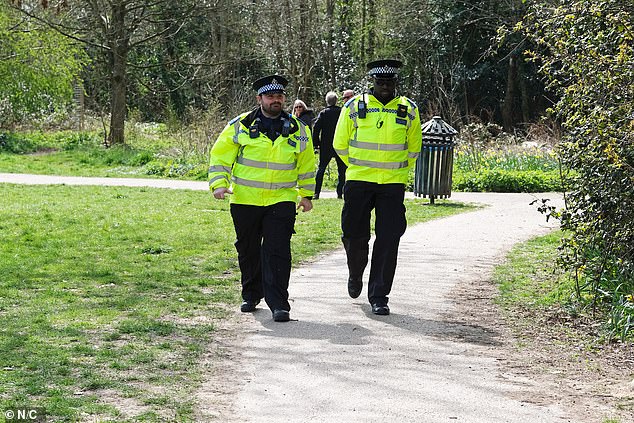 Longcroft Park on April 4. Three teenagers, aged 14, 15 and 17, have now been charged in relation to the assault 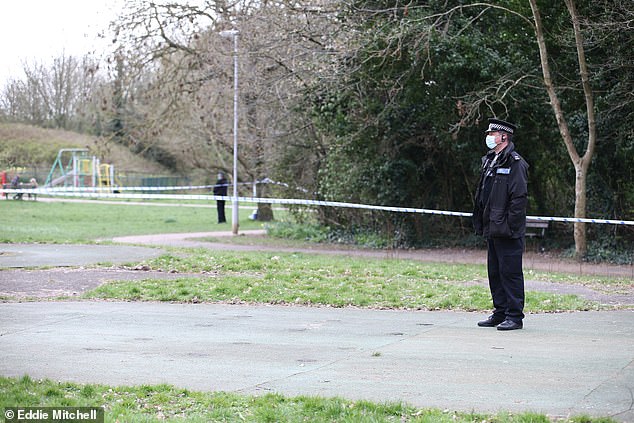 Police pictured at the scene on April 4. Mr Willson’s wife Annie, 49, had described how her husband was ‘fighting for his life after brain surgery for multiple bleeds on the brain’ following the incident

‘While the investigation is still ongoing, we will not be commenting or speaking any further and we continue to ask that our privacy is respected during this time so we can focus on my husband’s recovery.’

Chief Inspector Sarah Leadbeatter, district commander for Worthing, said: ‘We understand the community’s concern following this assault, and this is something we take very seriously. We want people to be able to feel safe in the areas where they live, work and visit.

‘We have stepped up our police activity in the area, including additional patrols, searches, dispersal orders and engagement with young people and other members of the public. This has been positively received so far, and it is something we will be continuing going forward.

‘We also continue to work closely with partners to ensure a joined-up response to any issues that negatively impact on our communities.

‘Protecting people from harm is one of our top priorities and if members of the public do have any concerns, I’d encourage them to get in touch with us so we can respond effectively.’