Three teenage boys ‘mercilessly’ murdered a father-of-one on his doorstep with a 2ft-long ‘Rambo knife’, before ‘mocking’ the man’s partner as their girlfriends helped them escape, a court heard.

Je Daine Carty, Cohan Daley and Ismaila Kamarra-Jarra, all 18, allegedly killed Frantisek Olah at his home in Basingstoke, Hampshire, just yards away from his distraught partner and their young child.

The trio was then heard ‘chuckling’ and making ‘jokes’ after they stabbed the 30-year-old ’20 times’ with a knife.

Their 18-year-old girlfriends – Kelsea Byrne, Kaysha Saunders and Abbie Mills – then allegedly helped them flee the scene and hide evidence.

Frantisek Olah was killed in front of his partner and child on his door step in May of this year. Three 18-year-old boys are on trial at Winchester Crown Court charged with his murder

Mr Olah was pronounced dead at the scene on May 22 of this year after he lost a ‘profuse’ amount of blood from the stab wounds which were up to 12cm deep.

Prosecutor Sarah Jones KC said one of the knives used had been a 67cm-long Rambo knife, which had a part-serrated 43cm blade.

The victim had been known to one of the suspects, Carty, through cannabis deals, the court heard.

Following the murder, one of the suspects suggested to a friend that Mr Olah had been killed following a dispute over drugs and because ‘he was being mean to them’, the jury heard.

Ms Jones KC said: ‘On May 22 this year, Frantisek Olah was relaxing at home with his partner, Chelsea Lee, and their young child – he was about to turn 31 years old.

‘This is a case about how these young men arrived at his door and mercilessly cut him down. 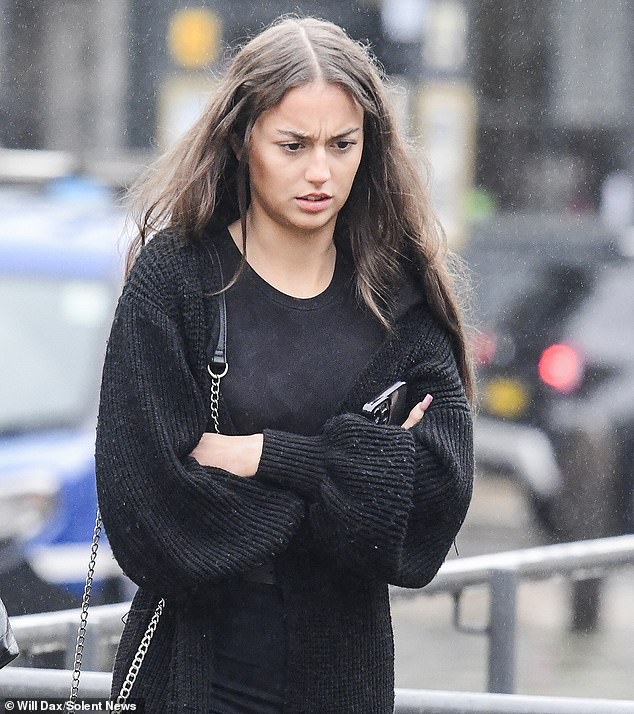 Kelsea Byrne (pictured) allegedly helped them flee the scene and hide evidence. Various CCTV footage shown in court, appears to show the cars of Byrne and Kaysha Saunders driving to and from various locations with the attackers

‘At around 11pm three young men arrived at his door and within an astonishingly short amount of time, he was lying just inside his own front door bleeding to death from numerous stab wounds.’

By the time emergency services arrived to help Mr Olah, ‘it was too late’, the prosecutor said. Just after midnight he was pronounced dead at the scene.

Following the horrific attack the three teenage boys were said to have ‘revelled in the powers of ruthlessness’ that ‘possessed them’ before their girlfriends helped them escape from the area.

Ms Jones KC said: ‘The defendants’ subsequent behaviour seems to suggest they may have enjoyed and revelled in the powers of ruthlessness that appear to have possessed them.

‘Their girlfriends, or friends, tried to help them get away from the area and hide incriminating evidence.’

The court heard that the ‘speed and ferocity of the attack’ meant the three teenage girls ‘knew what was going to happen and the part they were about to play.

The prosecutor then spoke on behalf of Chelsea Lee, the partner of the victim.

She said: ‘Mr Olah obviously cannot tell us what happened, but his partner, will do her best.

‘Chelsea was sitting watching something on TV before there was a bang on the door – not just a knock.

‘He went to the door but then she heard an even louder bang and heard Mr Olah shouting, like he was in pain. 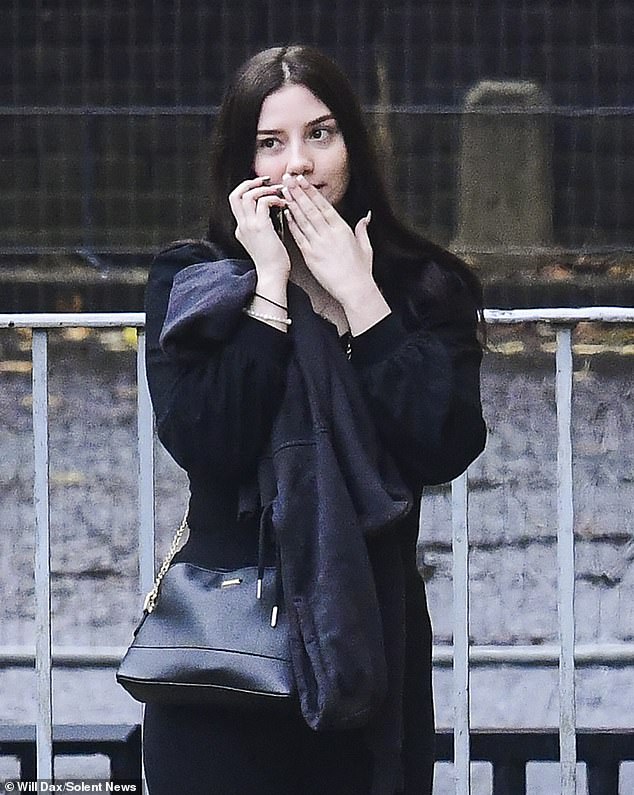 Abbie Mills, 18, (pictured) is also charged with assisting an offender. The court heard a taxi driver that evening heard Mills, in response to the cordoned off crime scene, say ‘I’m actually scared now’ before being told to ‘shut up’ because they were in a taxi

‘She came through to the hallway and saw him lying on the floor with one of the men already in and two right behind.’

Carty was the first one to intrude into the home, Ms Lee’s account said, and was carrying a ‘Rambo knife’.

Ms Jones KC said: ‘She heard [Carty] say something about giving them the keys – but in fact the car wasn’t taken.

‘[Carty] was stabbing into the upper part of his body and Mr Kamarra-Jarra, he too was stabbing and then the third.

‘They were all stabbing, repeatedly and at speed – she thinks they stabbed him about 20 times before she shouted at Mr Carty who came towards her.’

Ms Lee then retreated into their garden to get help from a neighbour, shouting ‘there’s people in my house with knives’.

The three teenagers were then seen ‘running off down the road’ having used the back entrance and gone through the couple’s garden.

The court heard that when she went back into the house to fetch her young child, Mr Olah was lying in so much of his own blood, ‘it was hard to approach’. 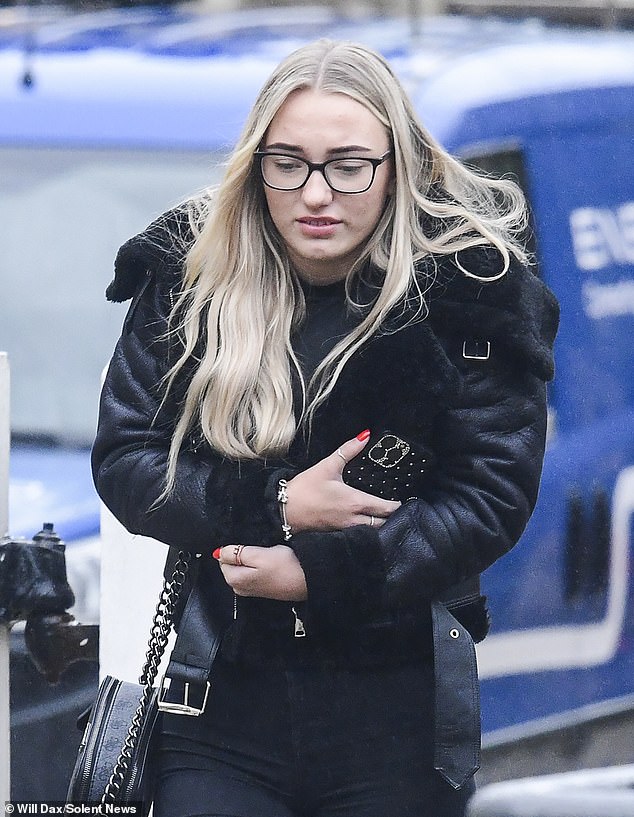 Kaysha Saunders, 18, (pictured) also is charged with assisting an offender. The prosecutor Ms said Byrne and Saunders were together, ‘waiting to be called’ to assist the men and ‘ferry them around’

One neighbour giving evidence to police said one of the attackers ‘appeared to laugh’ as they fled the scene.

The report said the bleeding would have been ‘profuse’ and his death ‘inevitable’ given the rapid blood loss.

After the attack there were a series of calls between the men and the three young women, the jurors heard. 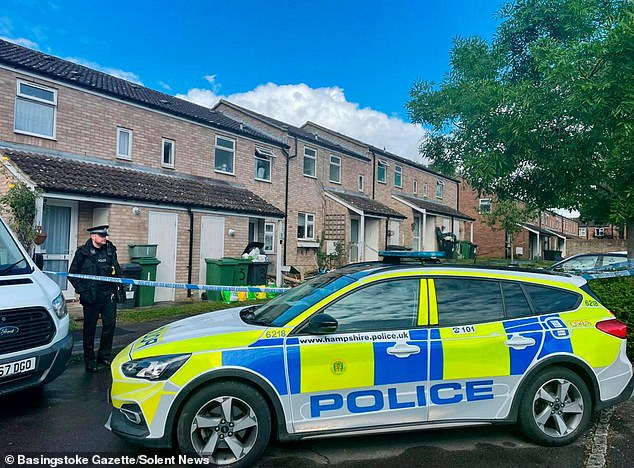 Various CCTV footage shown in court, appears to show the cars of Byrne and Saunders driving to and from various locations with the attackers.

Ms Jones KC said Byrne and Saunders were together, ‘waiting to be called’ to assist the men and ‘ferry them around’.

Ms Jones KC added: ‘What could have been so important it needed all those meetings and phone calls in the early hours of the morning?’

The court heard a taxi driver that evening heard Mills, in response to the cordoned off crime scene, say ‘I’m actually scared now’ before being told to ‘shut up’ because they were in a taxi. 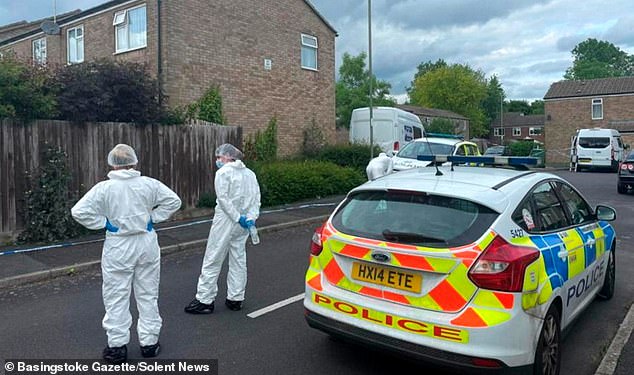 Ms Jones KC said: ‘The crown suggests that this is Abbie Mills investigating the actions of her boyfriend. What then transpires is that the men scatter.’

The court heard that Byrne drove Carty and Kamarra-Jarra to Oxford.

Ms Jones KC told the court that Kamarra-Jarra had a friend in Oxford, who said of their exchange: ‘He said he was in hiding and killed someone because he raised the price of drugs and was being mean to them.’

Kamarra-Jarra had told the friend that they ‘hadn’t meant’ to kill Mr Olah but told how he had stabbed the man in the back and ‘twisted the knife’.

Ms Jones KC added: ‘They went for a meal together and at the meal Mr Kamarra-Jarra and Mr Carty were making jokes and making fun of what had happened.’

The court heard how the contact in Oxford recalled in the taxi back from the meal, Ms Lee rang them accusing them of killing her baby’s father – to which they both laughed, ‘chuckling and mocking her’.

Kamarra-Jarra and Carty were later arrested, as well as Daley who was arrested in Southampton.

All three boys, all from Basingstoke, deny murder.

The trial – which is expected to last eight weeks – continues.