Three Sydney clubs have made the cut in the 2021 edition of the World’s Best Bar Awards.

The Maybe Sammy cocktail bar in The Rocks came in at number 22 on the top 50 list, with Cantina OK! in the CBD following in 23rd and Re in the city’s inner south taking out the 46th spot.

London’s Connaught bar inside Mayfair’s opulent Connaught Hotel took out the top gong for the second year in a row.

The swanky cocktail bar, where handcrafted drinks cost between £20 and £24, was praised for staying ‘true to its principles of presenting artful, modern drinks with graceful service’.

In second place was another London bar –  Tayēr + Elementary – in Shoreditch. It took the place from New York’s Dante, who dropped to 30th on the list.

While British bars took the top two spots they were almost absent from the rest of the top 50, only taking one more spot at number 31 for Kwānt in London’s Piccadilly.

The accolades were announced last night as part of the Perrier-sponsored World’s 50 Best Bars 2021 awards in an ceremony in London.

The awards recognise the hard work from the entire bar sector over the past year and aim to inspire and encourage hospitality venues in the next crucial stage of recovery – with 17 countries featuring on the top 50 list.

44. Above Board, Melbourne, Australia

Speaking of Connaught, judges said: ‘Under the masterful leadership of Agostino Perrone, the venue’s Director of Mixology, Connaught Bar stays true to its principles of presenting artful, modern drinks with graceful service in an elegant setting.

‘Designed by the late David Collins, the Cubist-inspired bar is known for its unique Martini trolley, where bartenders give a personalised drinks experience to guests.

‘Perrone has developed a strong and dedicated leadership team including Head Mixologist Giorgio Bargiani and Bar Manager Maura Milia, who embody hospitality and drinks craft, as well as providing inspiration to a talented ensemble of junior bartenders who aspire to follow in their footsteps.

Housed in the uber-swanky Connaught Hotel in London’s Mayfair district, The Connaught Bar is famed for its martini trolley, and the the hotel watering hole consistently ranks amid the best bars in the world.

Cocktails cost between £20 and £24. Their signature Connaught martini is a  classic aperitif, served with a unique twist, tailored to each customers individual taste with handmade bitters, made with Tanqueray No.10 Gin, blend of dry vermouths, selection of bitters.

Tayēr + Elementary, which was awarded the Disaronno Highest New Entry last year when it placed No.5, takes the No.2 spot on this year’s list, showcasing the diversity of London’s bar scene. 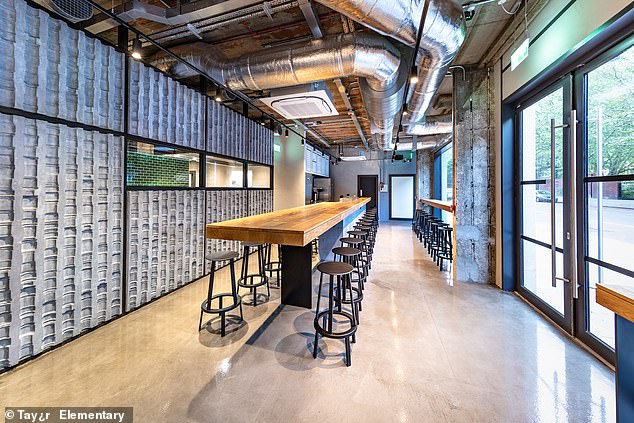 In second place was another London bar – Tayēr + Elementary (pictured) – in Shoreditch. It took the place from New York’s Dante, who dropped to 30th on the list. 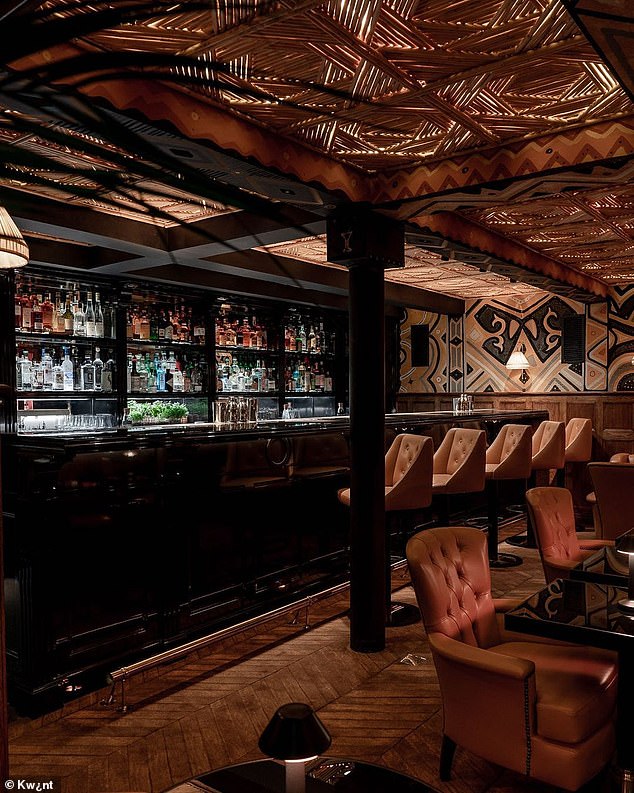 While British bars took the top two spots they were almost absent from the rest of the top 50, only taking one more spot at number 31 for Kwānt in London’s Piccadilly. 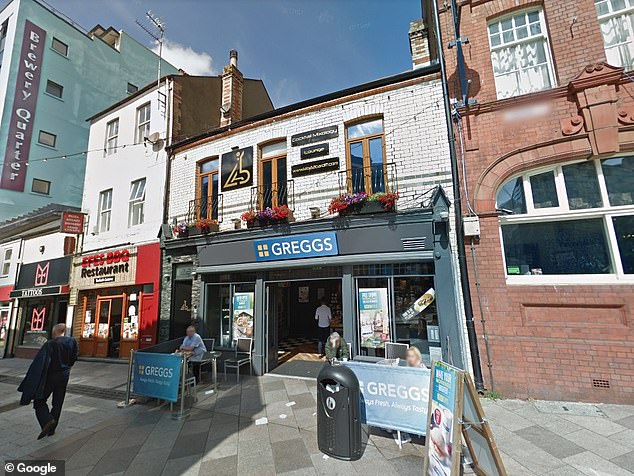 A humble bar above a Greggs has been praised for showcasing artistry, sustainability and incredibly inventive cocktails, Lab 22 takes to the stage with the Siete Misterios Best Cocktail Menu Award 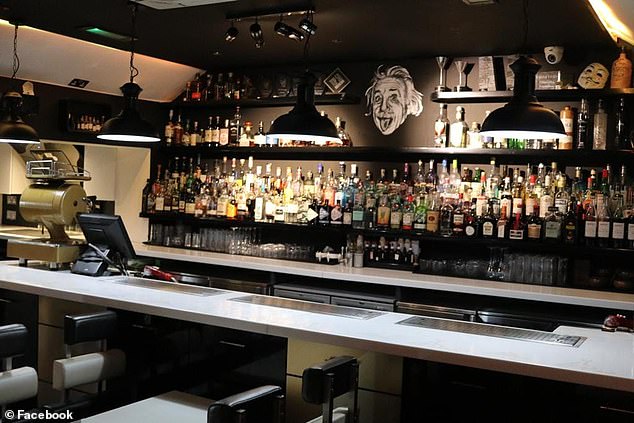 Inside the best bar in Wales: Outside the main list, the UK also takes the title for Siete Misterios Best Cocktail Menu, with Cardiff’s Lab 22 winning the award. This award was open to any bar in the world, not just those in the 50 Best list

Revealed: The best bars in the UK – and what the judges said

A triumph from the start, Connaught Bar still manages to edge closer to perfection every time its doors open. It is the quintessential London hotel bar, but in its poise, elegance and the leadership of Agostino Perrone, Giorgio Bargiani and Maura Milia, it has a distinct Italian accent. From the welcome on entrance and the backdrop of gleaming David Collins-designed cubist decor, to the intuitive service and cocktails that run a delicate line between classicism and modernism, this is a bar for which excellence has become a bare minimum standard.

To its apostles, the headline act is the Dry Martini, which arrives via a trolley that becomes a temporary stage for your own personal performance. Thrown between shaker and mixing glass is your choice of gin – try the bar’s own, distilled at the hotel – and bitters from an aroma-daubed flavour card inspired by perfumeries. But from January 2022, do also have a leaf through the new menu, Impressions, which takes inspiration from the encounters that shape our experiences. The Eclipse cocktail stands out – from the white page and the black tables. Inspired by contrast in photography, this gin cocktail is housed in a striking white glass, painted black on the inside so the liquid fades to nothing. Just as the Connaught Bar, it leaves a lasting impression.

A venue of two parts, Elementary is the industrially styled space you first encounter: a casual all-day spot where cocktails are prepared in seconds, thanks to a draught system, while the bar’s own-label wine and beer are a frequent presence. While most visits start with the bar’s signature One Sip Martini, the menu here takes in other spins on familiar classics, with a weekly rotating menu in sync with the seasons and their bounty. Everything is served without garnish or affectation in identically squat glasses – here the deliciousness of the liquid does the talking.

Through the partition at Tayēr, the drinks are even more loquacious, with esoteric ingredients harnessed in a daily carousel of new recipes; always in step with the seasons and the kitchen’s latest creations. Be it here in Tayēr’s open kitchen-like theatre, or a fleeting drink in the bustling, bar industry-strewn Elementary, this is a venue through which the small details of the future of bartending have been foreseen – and forensically executed.

A humble bar above a Greggs has been praised for showcasing artistry, sustainability and incredibly inventive cocktails, Lab 22 takes to the stage with the Siete Misterios Best Cocktail Menu Award. The up-and-coming establishment in Cardiff, the capital of Wales, UK, is constantly pushing the boundaries of mixology, design and creativity with each of its menus.

Lab 22’s recent edition takes cues from the future of science and invention. The cocktails embody practices such as urban farming (Concrete Daisy uses rooftop honey) and marine exploration (Point Nemo is garnished with sea-salted chocolate fish scales). Every page is deeply considered, with beautiful artwork and any extra information, such as the science behind the drink, accessible via a QR code.

Lab 22’s ideological values: accessibility, transparency and community, are present throughout the menu. The text is available in both English and Welsh to accommodate its multilingual guests and the flavour combinations are explained in a ‘drop matrix’ in the centre of the menu, to aid drink decision-making. Locally sourced and grown ingredients are found in each cocktail, while the sharing drinks contribute to chosen charities and funds, such as Cardiff Foodbank and The Drinks Trust.

Guests are also encouraged to support more of the city’s local businesses through the ‘decision tree’ flowchart at the denouement of the menu, which suggests where drinkers might want to head to next.

Descending the steps and opening the doors to Erik Lorincz’s Kwānt is to find yourself in a different time, a different place. It’s hard to put your finger on just when and where – there are brushstrokes of the 1940s classic Casablanca, but in the herringbone-patterned carpet, palms, rattan chairs and bamboo-styled ceilings are shades of tiki too.

The immaculate service by white-jacketed bartenders brings it all together: this is a five-star tropical bar.

And the name Kwānt? It’s a derivative of ‘quaint’ and, in feel, decor, and the vintage spirits collection it is just that, though the cocktails have one foot in the past and one in the future.

Outside the main list, the UK also takes the title for Siete Misterios Best Cocktail Menu, with Cardiff’s Lab 22 winning the award.

This award was open to any bar in the world, not just those in the 50 Best list.

While London takes the top spots, Spain leads Europe, with four bars out of 17 on the list, including Barcelona’s Paradiso at No.3, followed by Two Schmucks, which climbed 15 places to No.11. 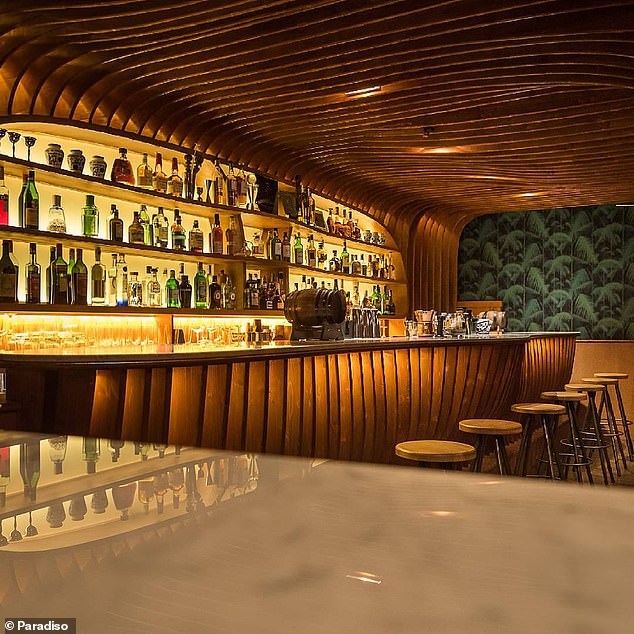 Paradiso in Barcelona, Spain was number 43 on the list and the top bar in Spain 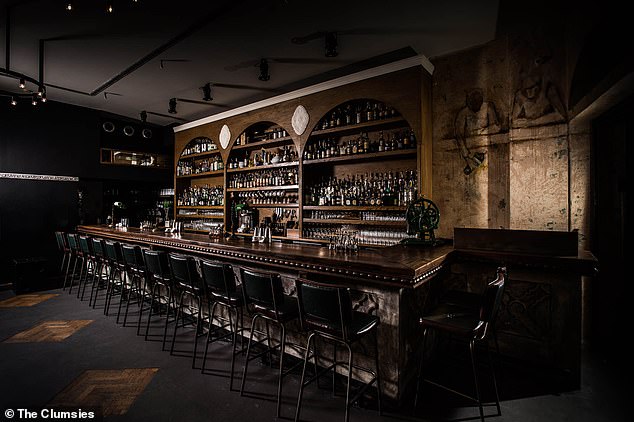 The Clumsies in Athens, Greece was the number one bar in Greece and the fourth best in the world

Mark Sansom, Content Editor for The World’s 50 Best Bars, told FEMAIL: ‘Connaught Bar, we salute you – to be named The World’s Best Bar for two consecutive years is a feat that previously only two bars have achieved in the awards’ 13-year history. It’s a testament to Ago Perrone and his team’s continued pursuit of excellence, which is encapsulated in the way they have developed and modernised the Martini cocktail.

‘We also want to send all the venues on the 2021 list of The World’s 50 Best Bars huge congratulations. It’s been another incredibly tough year for hospitality and the industry’s resilience and togetherness through these challenges is humbling. We hope that the positive stories around the bars’ success in the awards will help to drive vital business in the weeks and months to come.’

Elisa Gregori, Perrier International Business Unit Director, says: ‘On behalf of Perrier – and as the leading partner of The World’s 50 Best Bars since 2014 – we feel proud of the strong collaboration and solidarity we share with the international bar community. Similar to last year, we are particularly proud to show our appreciation to all the bars that have made the list during these ongoing hard and uncertain times. 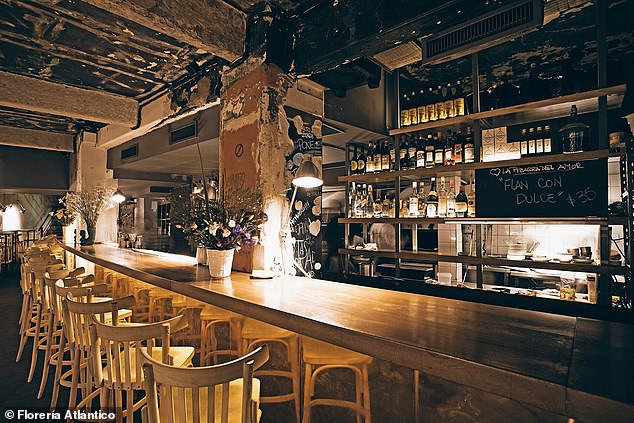 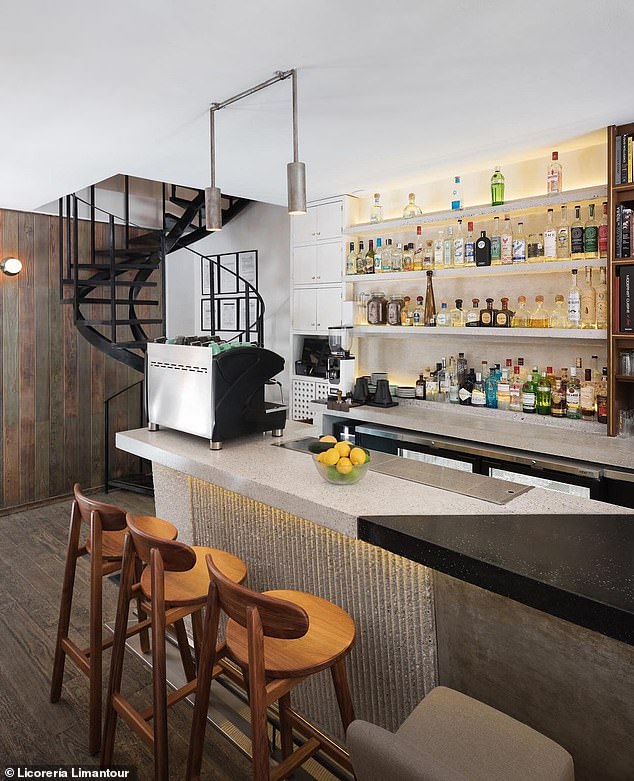 Licorería Limantour in  Mexico City, Mexico came top in Mexico and number six in the world

‘Even though the pandemic continues to impact the hospitality industry, in the past months the industry has shown incredible resilience and has learned to adapt to local constraints. We look forward to overcoming these turbulent times and we will always remain with you to ensure the international bar community will become stronger than ever.’

For 2021, The World’s 50 Best Bars made a variety of changes to adapt to the impacts the pandemic has had on bars around the world. Due to limited travel opportunities throughout much of 2020 and 2021, the voting guidelines and voting requirements were re-evaluated to reflect this.

The list is based on members of The World’s 50 Best Bars Academy’s bar experiences across a voting period between March 2020 to September 2021 inclusive.

For this year there was no requirement for The World’s 50 Best Bars Academy to cast international votes, although if members had been fortunate enough to travel internationally, they were encouraged to allow these experiences to inform their voting choices, and they were asked to vote for 7 bars in order of preference.

Voting remained anonymous and secure, and the voting process and results are independently adjudicated by Deloitte.

OpenTable, the world’s leading provider of online restaurant reservations, marks another year of world class dining by releasing its annual list of the top 100 restaurants in the UK, based on nearly one million reviews left by verified diners. The top 100 covers a wide range of cuisines in locations across the UK, from Preuvian restaurant COYA Mayfair in London, to Pan-Asian restaurant Sohe in Newcastle Upon Tyne.

Robin Chiang, VP, OpenTable commented: ‘After the pandemic prompted a year’s hiatus of our Top 100 list, we are pleased to once again share a selection of our diner’s favourite restaurants, showcasing the brilliant breadth of dining experiences available across the UK.

‘Reviews are an important part of the OpenTable service, enabling customers to give authentic feedback on their dining experience and helping others to discover great restaurants. In 2021 London continued to offer a fantastic selection of restaurants, but the list also clearly shows the love diners have developed for their local restaurants and neighbourhood hotspots in the last year.’