Three new inquiries were launched yesterday amid the fallout from the BBC’s Princess Diana scandal.

And a separate review was launched into why Martin Bashir was re-hired in 2016, with one senior MP questioning if it was ‘in essence so he would keep his mouth shut’.

A separate review was launched into why Martin Bashir was re-hired in 2016. (PIctured, Bashir and Diana during the controversial Panorama interview.

Meanwhile, the Commons media committee of MPs announced a hearing as soon as next month to grill BBC bosses.

The trio of fresh probes follows last week’s damning report by retired judge Lord Dyson into how Bashir deceived Diana with cruel lies to secure his famous Panorama interview with her in 1995.

Lord Dyson also condemned BBC managers for hushing up the reporter’s tricks.The Duke of Cambridge then lambasted executives for their part in the cover-up and praised investigative journalists, after the scandal was uncovered by The Daily Mail and Mail on Sunday.

In angry exchanges in Parliament yesterday, Tory MP Lee Anderson declared the ‘once-great BBC is rotten’. Speaking in the first debate into the Dyson report, he argued that the best way to make the broadcaster behave was to get rid of the licence fee and make it a subscription service.

And Tory MP Julian Knight, chairman of the digital, culture, media and sport committee, demanded to know why the BBC re-hired Bashir as religious affairs correspondent in 2016. Bashir was later promoted to religion editor, all while Lord Hall – blasted for leading a 1996 whitewash probe into Bashir – was BBC director-general. Mr Knight told MPs yesterday: ‘My sources suggest Mr Bashir was not interviewed, [but] simply appointed. Was Bashir rehired in essence so he would keep his mouth shut?’ 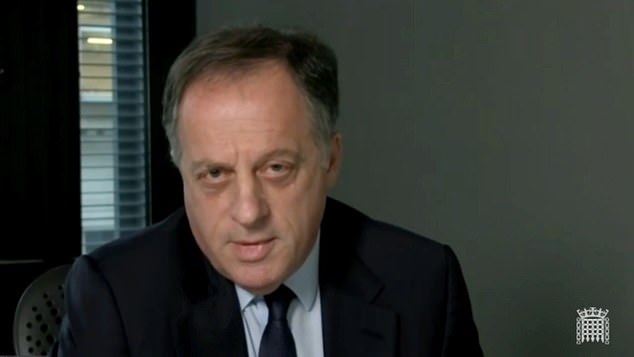 But the BBC last night insisted Mr Knight had been misinformed, adding: ‘there was an interview process for this position’.

New BBC director-general Tim Davie has now launched a ‘review’ into how and why the reporter was taken back, to check there was nothing ‘untoward’ about it, sources said. And yesterday the BBC chairman pledged: ‘I don’t take comfort yet from understanding why he was re-hired – we will find that out.’ Mr Sharp admitted that even last year, when the Mail was asking questions of the corporation about the Diana scandal and ‘not getting answers’, there was a ‘cultural failure’ in terms of ‘transparency, accountability and honesty’.

The BBC Radio 2 presenter, who hosted Panorama for four years until 2010, suggested it was time to call in the police.

He tweeted it was ‘hard to disagree’ with Nazir Afzal, former chief prosecutor for North West England, who said ‘police cannot hold back any longer’. But Vine later deleted his tweet.

Writing in the Daily Mail yesterday, Mr Afzal said a criminal probe should consider investigating Bashir for charges including forgery, pecuniary advantage by deception or misconduct in public office.

Scotland Yard was already under pressure to launch a probe after Diana’s brother Earl Spencer urged it to look into alleged blackmail and fraud at the BBC.

At the weekend, Justice Secretary Robert Buckland suggested ‘fraud’ and ‘forgery’ may have occurred. And Home Secretary Priti Patel refused to rule out criminal prosecutions.

An investigation was also demanded by the family of ‘Babes in the Wood’ murder victim Karen Hadaway as they called Bashir a ‘rogue and dishonest’ journalist.

The family of Karen, who was killed aged nine along with Nicola Fellows in 1986, claimed Bashir had delayed justice after he visited them and took the clothes she had been wearing.

Asked about such problems, during an interview on Radio 4’s The World At One, Mr Sharp said: ‘Well, what I do know is they clearly existed in 2020.’

He said the BBC board would conduct a review of ‘editorial policies and governance’, adding that the Dyson Report had revealed practices that were ‘entirely unacceptable in any ethical news broadcasting entity’.

Mr Sharp warned: ‘We are owned by the people of the UK and have a fantastic 100-year tradition of impartiality and integrity. But if the people of the BBC, in terms of reporting, management, leadership and scrutiny fail, then the organisation fails.’ The culture committee, which scrutinises government media policy, announced a hearing which could take place next month.

Mr Knight said: ‘We believe the BBC has further questions to answer following last week’s report by Lord Dyson and further speculation in the media over the weekend, including views expressed by Martin Bashir himself. We want to speak to those who were involved at the time and in the years that followed. Scrutiny of the BBC has never come at a more critical time for the broadcaster.’

In the Commons, media minister John Whittingdale said the BBC had ‘lost touch’ with a large part of the country. He said there would be a debate about its future funding when the current charter expires in 2027. Tory MP Sir Edward Leigh asked: ‘When are we going to have the guts to stop the BBC criminalising people for non-payment of the licence fee, which is no better than the poll tax?’ Mr Whittingdale said decriminalisation had not been ruled out but pointed out that ‘alternative enforcement’ could mean bailiffs and higher fines.

He also told MPs he thought there was a case for ‘greater oversight, particularly of journalistic decisions and editorial decisions’ in the BBC. But he insisted that it had already undergone major reform since the Bashir scandal and other controversies.

Ofcom welcomed news of the BBC’s governance review. But in a letter to Mr Davie, the regulator’s chief executive Dame Melanie Dawes wrote: ‘In our day-to-day dealings with the BBC, we too often meet with reluctance that gives the impression of a bias against transparency.’