Russia is now in charge of the International Space Station after NASA handed over responsibility earlier today.

US astronaut Tom Marshburn had been the commander of the orbiting outpost for just over a month, but ahead of his return to Earth he transferred control to Russian cosmonaut Oleg Artemyev.

The 51-year-old becomes the 67th commander of the space station and the 31st Russian to assume the role.

Four astronauts, including Marsburn, are heading home following a six-month stay on the orbiting outpost.

Before leaving, Marshburn had to hand Artemyev the ceremonial key to the station, which the American called a ‘place of peace’.

Four astronauts are returning to Earth later after a six-month stay on the International Space Station. From left, the European Space Agency’s Matthias Maurer, plus NASA astronauts Tom Marshburn, Raja Chari, and Kayla Barron are due to splash down off Florida tomorrow (Friday) 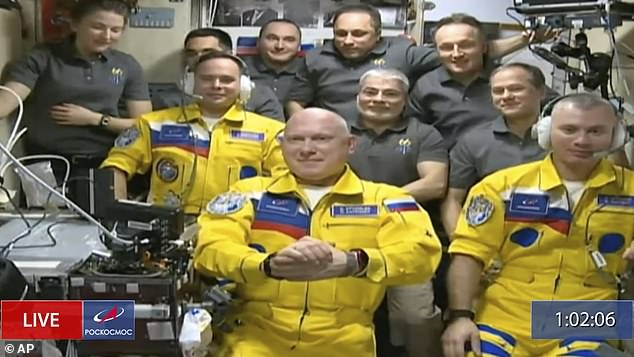 US astronaut Tom Marshburn had been the commander of the orbiting outpost for just over a month, but ahead of his return to Earth he transferred control to Russian Oleg Artemyev (pictured centre). He and fellow cosmonauts Sergey Korsakov and Denis Matveyev caused a stir when they arrived at the ISS wearing yellow and blue flight suits, which some claimed resembled the Ukrainian national colours

‘I think the lasting legacy of the space station is very likely to be international cooperation and a place of peace,’ Marshburn said during a webcast change-of-command ceremony yesterday.

‘Oleg, you’re a very strong and experienced cosmonaut,’ Marshburn told Artemyev. ‘I know we’ll be leaving the space station in good hands with you.’

‘It was an unbelievable time together,’ he added, stressing the importance of such cooperation and friendship for ‘family, our children and peace between our countries.’

Artemyev and Marshburn then hugged as the other ISS crewmembers applauded.

A veteran of three spaceflights to the space station, Artemyev will now remain in charge of the ISS until the end of summer.

Despite Artemyev assuming responsibility as station commander, however, overall command of the orbiting laboratory still lies with ground-based flight directors unless there is an emergency on board.

The changeover took place just days after Russia said it would quit the International Space Station in retaliation for global economic sanctions placed on Moscow over the war in Ukraine.

Dmitry Rogozin, general director of the Russian space agency Roscosmos, said Moscow would no longer co-operate with its international partners aboard the ISS, confirming that the decision to withdraw had already been taken.

He said Roscosmos is not required to give an exact date of its withdrawal, but affirmed the Russian space programme will adhere to the stipulated year-long notice period. 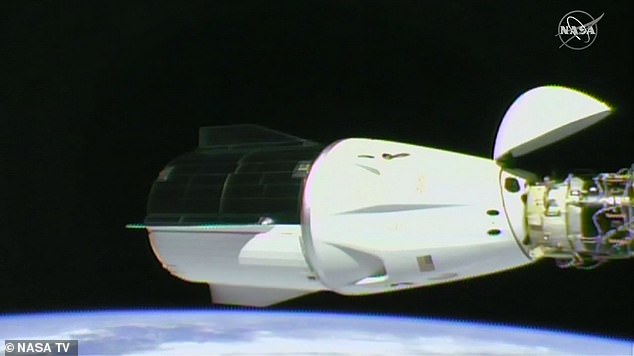 The three NASA astronauts and one European climbed aboard a SpaceX Crew Dragon capsule shortly after 05:00 BST (00:00 ET) and left the space station just over an hour later

WHICH ASTRONAUTS ARE RETURNING FROM THE ISS?

An American test pilot and NASA astronaut, Chari was born in Wisconsin before later graduating from Massachusetts Institute of Technology, the United States Air Force Academy and US Naval Test Pilot School.

He is a colonel with over 2,000 flying hours to his name.

An American physician and NASA astronaut, Marshburn is a veteran of three spaceflights to the International Space Station.

He was commander on his last mission, before handing over the responsibility to Russian cosmonaut Oleg Artemyev.

An American submarine warfare officer and engineer, Barron was selected in June 2017 as a member of the NASA Astronaut Group 22.

She studied at the University of Cambridge and has carried out two spacewalks during her time in orbit.

German European Space Agency astronaut Maurer was a materials scientist who was selected in 2015 to take part in space training.

He successfully graduated from both basic astronaut training and pre-assignment training in 2018.

The four departing astronauts – including three NASA astronauts and one European – have been working alongside Russian cosmonauts on boards the ISS for six months.

At 05:00 BST (00:00 ET) this morning, they climbed aboard a SpaceX Crew Dragon capsule, and began their journey back to Earth just over an hour later.

The SpaceX Crew Dragon will hit the Earth’s atmosphere at more than 22 times the speed of sound, putting the astronauts through intense G-forces as the final portion of their descent begins.

If all goes smoothly, the craft, dubbed Endurance, will parachute into the sea while carrying some 550 pounds of cargo from the science mission.

Earlier today, live video showing the capsule drifting away from the station as the two vehicles soared high over Australia was shown on a NASA webcast.

Wearing helmeted white-and-black spacesuits, the four astronauts were seen strapped into the crew cabin shortly before the spacecraft separated from the space station, orbiting some 250 miles (400 km) above the Earth.

A series of several brief rocket thrusts then autonomously pushed the capsule safely clear of the ISS and lowered its orbit to line up the spacecraft for later atmospheric re-entry and splashdown.

‘Splashdown off of Florida’s coast is planned about 12:37 am Fri, May 6. The new undocking time allows for shorter phasing & more time to review the latest forecast info.’

She added: ‘Weather is being watched closely to confirm selected primary & alternate sites are good for return, and we’ll conduct another weather review about 24 hours before undocking to determine whether we are GO to proceed. More to come.’ 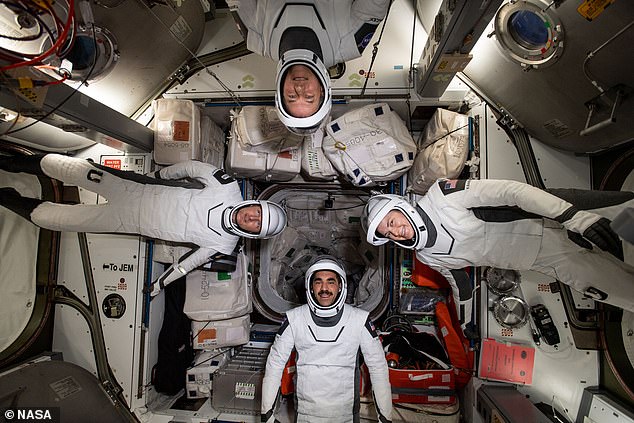 The Endurance crew, including Marshburn, 61, Chari, 44 and Barron, 34 and Maurer, 52, arrived at the space station on November 11 last year

The Endurance crew, including Marshburn, 61, Chari, 44 and Barron, 34 and Maurer, 52, arrived at the space station on November 11 last year.

They became part of history when they hosted the first all-private crew to visit the orbiting outpost last month.

Three wealthy businessmen — who each paid $55 million (£41 million) to take part in the trip — were joined by a former NASA astronaut for the history-making mission, which was organised by startup company Axiom Space.

But bad weather repeatedly delayed their departure, meaning they actually worked alongside the seven regular, government-paid crew for a total of 16 days. 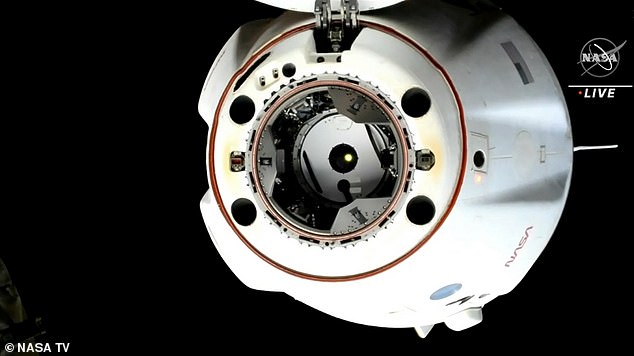 Earlier today, live video showing the capsule drifting away from the station as the two vehicles soared high over Australia was shown on a NASA webcast 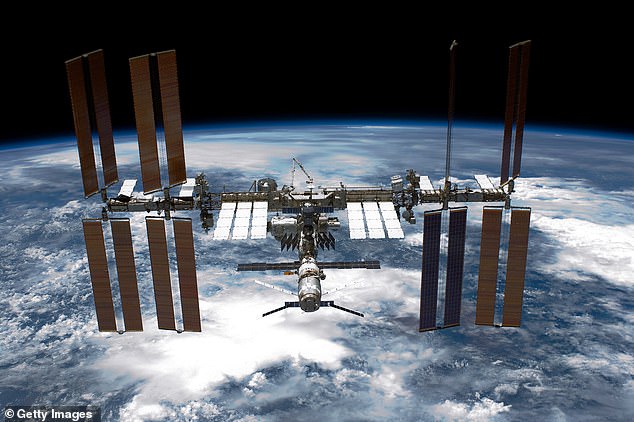 The NASA-ESA team flying home today has been officially designated ‘Crew 3’, the third full-fledged long-duration group of astronauts that SpaceX has launched to the space station

The NASA-ESA team flying home today has been officially designated ‘Crew-3’, the third full-fledged long-duration group of astronauts that SpaceX has launched to the space station for the US space agency.

Their departure came about a week after they welcomed their replacement team aboard the station, known as Crew-4, who were also delivered there by SpaceX.

California-based SpaceX was founded in 2002 by billionaire Elon Musk, who recently clinched a deal to buy social media platform Twitter.

The company has launched a total of seven human spaceflights over the past two years.

Crews have come mainly from the US and Russia, but the Japanese space agency JAXA and European space agency ESA have also sent astronauts.

The US space agency, NASA, spends about $3 billion (£2.4 billion) a year on the space station program, with the remaining funding coming from international partners, including Europe, Russia and Japan.

So far 244 individuals from 19 countries have visited the station, and among them eight private citizens who spent up to $50 million for their visit.

There is an ongoing debate about the future of the station beyond 2025, when it is thought some of the original structure will reach ‘end of life’.

Russia, a major partner in the station, plans to launch its own orbital platform around then, with Axiom Space, a private firm, planning to send its own modules for purely commercial use to the station at the same time.

NASA, ESA, JAXA and the Canadian Space Agency (CSA) are working together to build a space station in orbit around the moon, and Russia and China are working on a similar project, that would also include a base on the surface.