Three people are killed and four injured in mass shooting as a house party in Wilmington, North Carolina, turns into a bloodbath

By Annabel Grossman For Dailymail.com

A mass shooting at a house party in North Carolina has left three people dead and at least another four injured, police have said.

Police were alerted to the shooting inside a home in Wilmington at around midnight last night and found seven victims at the scene.

The police said they would not release the identity of the victims until family members have been notified.

The shooting occurred at a house party in a residential area of Wilmington, North Carolina, last night, leaving three dead and another four injured

The conditions of those injured are not known at this time.

No motive has been determined and investigators are working at the scene to identify suspects. Police Chief Donny Williams told WECT-TV that police do not feel that the public is in danger.

‘There was a house party that was taking place inside of a house,’ he said. ‘At least seven people inside were shot and three are deceased. 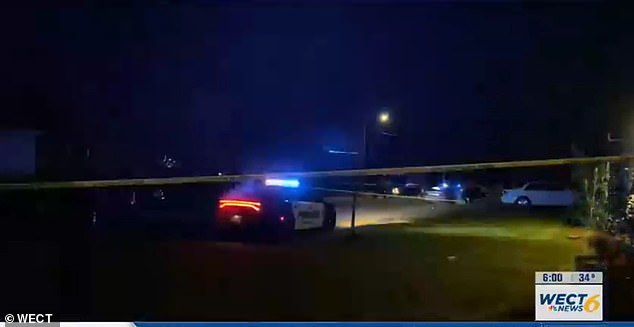 ‘They are not being identified until the next of kin has been notified. We don’t feel that the public is in any danger at the moment and are working to get suspects ‘

Photos taken at the scene at at 7th and Kidder Streets show the area cordoned off with several police cars stationed in the vicinity.