A record proportion of UK firms are expecting to hike prices for customers in the next three months as they are faced with a ‘huge headache’ of soaring inflation, rising energy costs and supply chain disruption.

In the midst of ‘unprecedented’ cost pressures, new Brexit rules on imports and exports, and the new Omicron variant causing further disruption, three in five said they would increase prices, a new survey shows.

But while inflation was the top concern for almost seven in 10 firms, one in four were also wary about interest rates going up further to keep a lid on soaring prices, as they fear higher borrowing costs will hamper their already fragile recovery.

Manufacturers have been hit the hardest by rising prices, with 77% planning to pass costs on

The British Chambers of Commerce, which surveyed some 5,550 firms in all main sectors, said there was enough evidence that the UK’s economic recovery had already weakened at the end of last year.

Some companies were still struggling to recover from losses incurred over the pandemic even before the emergence of Omicron, the BCC added, noting that almost one in four had seen their cash flow decrease.

‘The persistent weakness in cash flow is troubling because it leaves businesses more exposed to the economic impact of Omicron, rising inflation and potential further restrictions,’ said Suren Thiru, head of economics at the BCC.

Rising cost pressures have hit manufacturers the hardest, with 77 per cent of those surveyed saying they would put up their prices, followed by 74 per cent of retailers, 72 per cent of construction firms and 69 per cent of transport companies.

‘The record rise in price pressures suggests that a substantial inflationary surge is likely in the coming months,’ Thiru said.

‘Rising raw material costs, higher energy prices and the reversal of the VAT reduction for hospitality are likely to push inflation above 6 per cent by April.’

It comes as separate research suggests food bills for shoppers are now increasing by £15 a month, with the cost of fresh beef, lamb, savoury snacks and crisps at supermarkets have all risen by about 10 per cent in a year.

Inflation on household essentials is at 3.5 per cent compared with a year ago – with the figure now at its highest in almost four years, except for a blip in 2020 linked to the impact of the pandemic, according to Kantar.

It comes as the boss of Greggs revealed he has been forced to increase prices on some products due to the rising cost of ingredients and wages – while retail chain Next warned that prices will rise by as much as 6 per cent by next autumn and winter as it battles against soaring costs of freight transport and higher staff wages.

But despite inflation worries clouding their growth prospects, more firms were concerned about possible further hikes in the Bank of England’s base rate, which was raised from 0.1 per cent to 0.25 per cent in mid-December.

‘The notable uptick in concerns over higher interest rates underscores the need for the Bank of England to proceed with caution on further rate rises to avoid undermining confidence and an already fragile recovery,’ Thiru added.

He concluded: ‘The UK economy is starting 2022 facing some key challenges.

‘The renewed reluctance among consumers to spend and staff shortages triggered by Omicron and Plan B may mean that the UK economy contracts in the near term, particularly if more restrictions are needed.

‘Rising inflation is likely to limit the UK’s growth prospects this year by eroding consumers’ spending power and squeezing firms’ profit margins and their ability to invest.

Britain’s services sector grew at the slowest pace since the country was last in lockdown as Omicron hammered hospitality and travel firms – even though restaurants and bars were allowed to stay open as usual in England.

While a reading above 50 still indicates growth, that is the lowest since February 2021, when the UK was in lockdown. 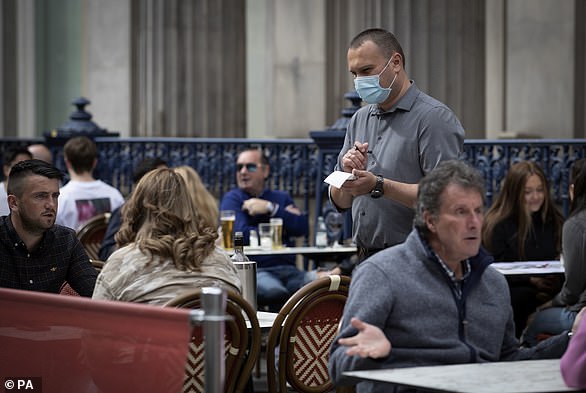 Unlike last winter, no new legal restrictions on firms were introduced in England, but many Britons decided anyway to limit social gatherings, resulting in a big fall in demand for so-called ‘face-to-face’ consumer services.

‘Mass cancellations of bookings in response to the Omicron variant led to a slump in consumer spending on travel, leisure and entertainment. Survey respondents also noted that renewed pandemic restrictions had slowed the recovery in business services,’ said IHS Markit economist, Tim Moore.

Both the ‘prices charged’ and the input costs components of the services PMI in December were well above their levels at the start of 2021, although down from peaks a few months earlier.

And similarly to what reported by the BCC, many businesses said they would need to pass on escalating costs to clients over the course of this year.

But services firms were more upbeat for 2022 as a whole, with 55 per cent expecting output to rise compared with 10 per cent predicting a decline, IHS Markit said.