Three England fans have been arrested in Munich for making Nazi salutes ahead of the Nations League tie with Germany this evening, local police said – as a video emerged of a group singing ’10 German Bombers’ despite Gareth Southgate’s pleas not to.

Another fan caused £1,700 worth of damage after he let off a flare inside his hotel room, while four others were arrested for incidents including insulting police officers and urinating in the street.

Many of the troublemakers were dealt with by being ordered to pay a security deposit of around £170 – the local equivalent of an on-the-spot fine – while two who were unable to pay the money were brought before a district judge.

Some bars in the city closed early yesterday after being overwhelmed by the number of fans, while other pubs did not open at all today after reports of incidents getting out of hand among some supporters.

Police were called to one ‘brawl’ yesterday, reported to have involved 30 to 50 England fans, but said it had dispersed by the time armed officers arrived on the scene.

There are fears of further clashes later today after some England fans bought tickets in the German-supporting section of the Allianz Arena.

A Munich police spokesman said police would only be able to stop England fans going in the ‘home’ end if there was an expectation they may cause trouble.

He said that 700 police officers had been deployed to deal with the influx of England fans to the city since Saturday, considerably more than would be working for a Bayern Munich football match.

It follows a plea from England manager Gareth Southgate for fans to behave to repair their damaged reputation, particularly in light of the unsavoury scenes at Wembley during the Euro 2020 final.

Three Lions supporters in Munich have said the overwhelming majority of fans want to ‘fix’ their ‘pretty poor reputation’ internationally, particularly in light of the unsavoury scenes at Wembley during the Euro 2020 final.

And they said England fans have been turning on troublemakers in an effort to clean up their image at international football matches, including condemning offensive chanting.

The FA has warned fans singing chants like ’10 German Bombers’ face being banned from future matches.

Adam Carr, a 21-year-old England fan who supports his hometown team Liverpool, said: ‘I noticed people were chanting the songs we’re not supposed to chant about Germany, and instantly they were told by other England fans to shut up.

‘It feels like everyone knows the spotlight’s on us, especially after the Euros. Everyone’s just trying extra hard. In the past with England away days there was a lot of trouble.

‘For the younger generation we want to be able to go to cities and go into places and people greet us with a friendly face rather than being ”Oh god, it’s the English”. That’s what we don’t want any more.’

His friend, 22-year-old Lewis Kenyon, a Manchester United fan from Rochdale, said: ‘(There were) a couple of chants but it got silenced pretty quick. Most people were on their best behaviour.

‘We’ve got a pretty poor reputation so we need to try and fix it a little bit. It’s trying not to act like idiots.’ 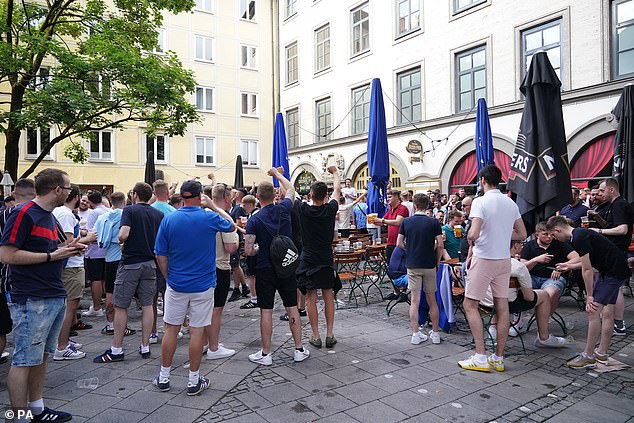 England football fans gather outside Kilians Irish Pub in Frauenplatz square. There’s no suggestion the people pictured are guilty of any wrongdoing

Jordan Hodgson, 25, a West Ham supporter from Carlisle in Cumbria, was among those in Munich’s Marienplatz main square wearing England colours, and said he feels younger fans are particularly keen to improve how they are perceived.

He said: ‘I think we’ve just got a reputation from the ’80s and ’90s. Obviously I am young, so I have not experienced any of that.

‘I’ve done a lot of away trips, I think we’re well behaved. There’s always one person who ruins that for us, and the press pick up on that all the time.

‘But I think we are well behaved in general. I’m going to be well behaved – I will have a few pints tonight but I will behave myself.’

Birmingham City fans Jack Gilligan, 22, from Solihull in the West Midlands, and 21-year-old Robbie Lavin, from Kings Heath in Birmingham, said they received a warm welcome from Germany supporters.

Mr Gilligan said: ‘The German people were inviting us to come round to the pubs, laughing and joking. They’re just happy to have football back, I think.

‘We’ve found quite a few England fans (with tickets) in the Germany end, we spoke to some German fans and they said it’s quite normal.’

Mr Lavin said: ‘We got here yesterday and went straight to the pub – everyone seems up for it. We’ve seen no trouble.’