Virgin Media broadband has gone down across the UK, leaving thousands of people working from home unable to get online.

The company’s service status is also currently unavailable, leaving disconnected subscribers unable to check the status of the connection in their area.

Angry customers have taken to Twitter to vent their frustration, saying they have online lessons to teach, digital courts to attend, exams to do, and Zoom meetings scheduled.

Virgin Media said this morning some customers had experienced a ‘brief issue’ with their TV service.

A message posted to their service status page for one area says: ‘You might find that you don’t have any Virgin Fibre, Virgin TV, TiVo or Interactive TV services at the moment.

‘We are sorry about this and are working hard to restore your services as soon as possible. We have identified the problem and an engineer is on their way.’

An outage map from just after 9.30am this morning, showing problems in London and the surrounding area, northern England, Wales, Scotland and Northern Ireland

Outage reports for Virgin Media spiked after 9.30am, as thousands were left unable to get online

Issues began around 8am, with 905 reports of problems on the site Downdetector.co.uk, before they spiked past 9.30am.

Taking to Twitter, one subscriber wrote: ‘@virginmedia what on Earth is happening to your services? Today – no broadband. Same yesterday. No one answering the phones. It’s dreadful.’

A second said: ‘What’s up @virginmedia? No broadband – wife needs it to teach her pupils remotely, I need it to attend court remotely. Tethering to mobile is a stopgap measure. When will broadband be back up in North London?’

And a third tweeted: ‘@virginmedia my internet connection is down. Can’t do anything. I can’t even call 150 from my landline. Please get me back online.’

Yet another angry customer said they had been left without internet for an hour and 15 minutes and that it was impossible to contact the call centre.

Virgin Media said some customers have experienced a ‘brief issue’ with their TV service this morning but that has now been resolved.

The company is responding to tweets of outage reports by saying: ‘Hi there, sorry to hear of the service issues. How’s things been since tweeting?’

This post on the service page from 9.30am tells angered customers that the service for checking internet connections in their area is currently unavailable 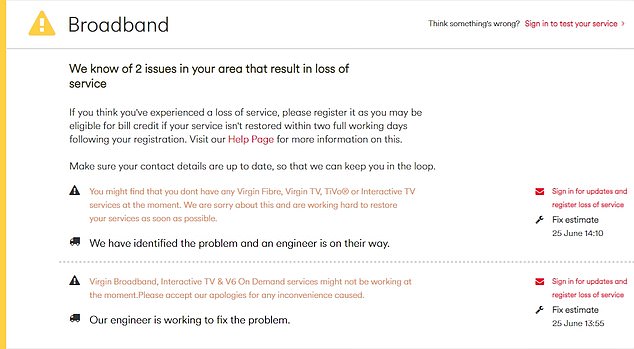 Posted at 10.30am in a specific area: The message says that engineers are working to fix the problem, but that internet will not be restored until just before 2pm 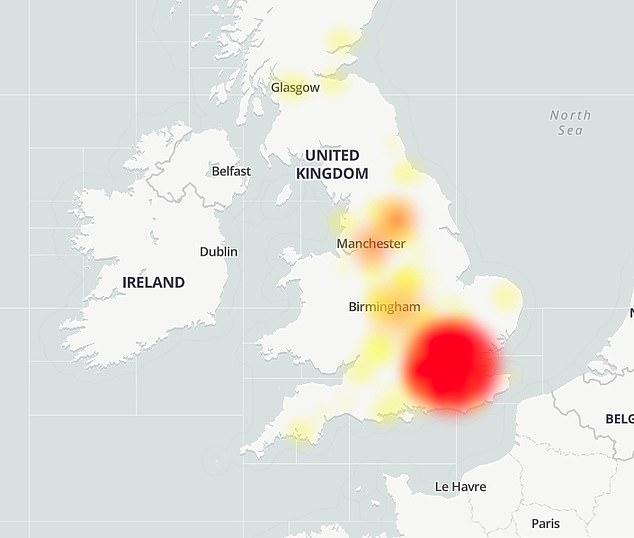 The company has begun posting messages on its service page, telling users in certain areas that they are working to identify the problem.

It warns that internet will not be restored for the next three hours and 30 minutes.

‘We know of two issues in your area that result in loss of service,’ it reads. ‘Our engineer is working to fix the problem.’

A message on its service page posted around 9.30am reads: ‘This part of the site isn’t working at the moment, but it’ll be up and running again soon.

‘Please come back and try again later. Other parts of the site might work as normal, so try using the links below to help you find what you want.’

Antony Edwards, COO of software company Eggplant, said outages may occur as IT systems are updated to support changed work patterns, with higher demands for internet.

‘Network operators are at the centre of this and overall have done an amazing job of keeping people connected and dealing with the increased demand, but today’s outage highlights just how difficult this is,’ he said.

‘Companies need fast and reliable testing to be able to roll out changes at speed and ensure they work.’

Virgin Media has 3.2 million customers, and 6 million broadband subscribers in the UK.

The network also went down in April, with customers sending in more than 41,00 complaints.

Another problem in May saw users reporting issues with their cable internet connection.

This is a breaking news story. More follows.