Thousands of eco-warriors have begun marching through central London today as they join forces with militant trade union supporters and cost-of-living demonstrators in a mega-demo to bring the capital to a standstill.

Eco-zealots Just Stop Oil vowed to ‘occupy Westminster’ as part of the nationwide ‘Enough is enough’ campaign, which is targeting more than 50 cities, towns and villages across the country.

The group said on Twitter that ‘thousands of ordinary people’ were set march on central London to demand ‘an emergency response to the climate and cost-of-living crisis.’

Former Labour leader Jeremy Corbyn was among the crowds after giving a speech to support today’s crippling railway strikes outside King’s Cross station, while his Peace and Justice Project group joined the demonstrations.

His conspiracy theorist brother Piers – who has mounted counter protests at similar events in the past, claiming global warming is a ‘myth’ – was also spotted in London in his now infamous yellow t-shirt.

Three metal bins were set on fire outside Kings Cross station by the group Don’t Pay, which handed out fake ‘fuel bills’ for people to throw into the flames.

Other groups including Campaign for Nuclear Disarmament and Insulate Britain are also said to be taking part.

Meanwhile, a huge demonstration in support of Mahsa Amini, who was recently tortured and killed by authorities in Iran for not wearing her hijab correctly, erupted in in Trafalgar Square.

Just Stop Oil previously said it is hoping for 1,500 of its volunteers to get arrested twice during the protests, which will see demonstrators blocking bridges over the Thames in London.

There was already a police presence on Lambeth bridge early on Saturday afternoon, where hundreds of protestors were holding a series of sit down demos.

While some of the Euston marchers carried a banner declaring capitalism ‘the enemy of Mother Earth’, others were protesting against the Government’s mini-budget.

One protester, who gave his name as George, held a sign that criticised the Conservatives’ lack of ‘fiscal budget responsibility’ along with their record on fossil fuels.

‘I think no government can run if it’s spending more, like vastly more, than it’s bringing in,’ he said. ‘That can’t carry on forever.’

He added, self-consciously: ‘I sound like David Cameron when I say that.’

Groups from across London had been due to converge on Westminster at 2pm, but this has now been pushed back an hour because of the delay in the marchers setting off.

Eco-zealots Just Stop Oil vowed to ‘occupy Westminster’ as part of a nationwide demonstration targeting more than 50 cities, towns and villages across the country. (Pictured: Protesters hold up flags and placards at a protest in central London on Saturday) 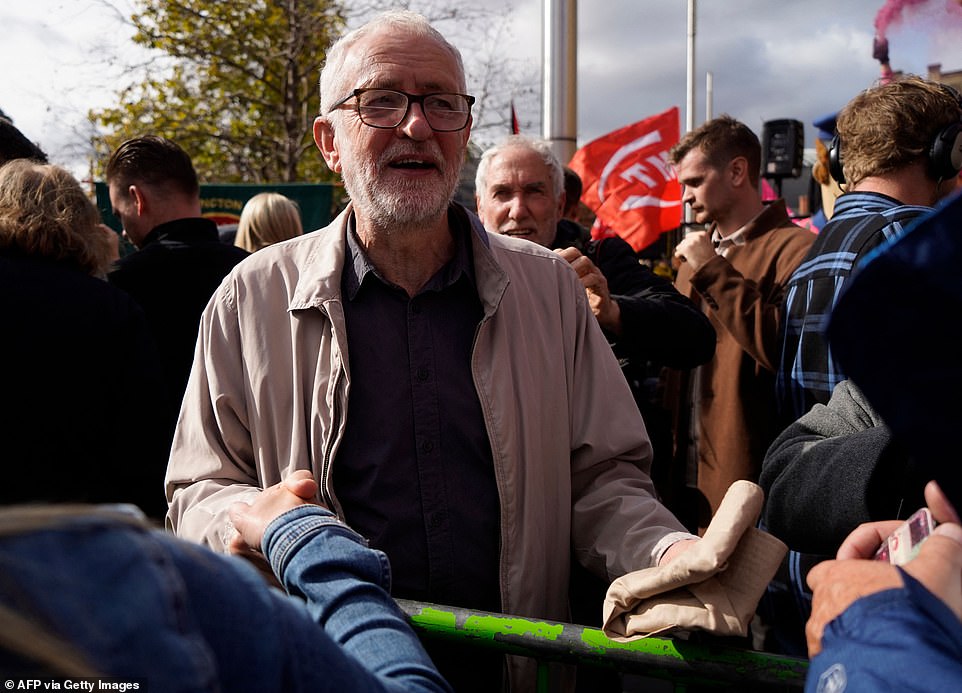 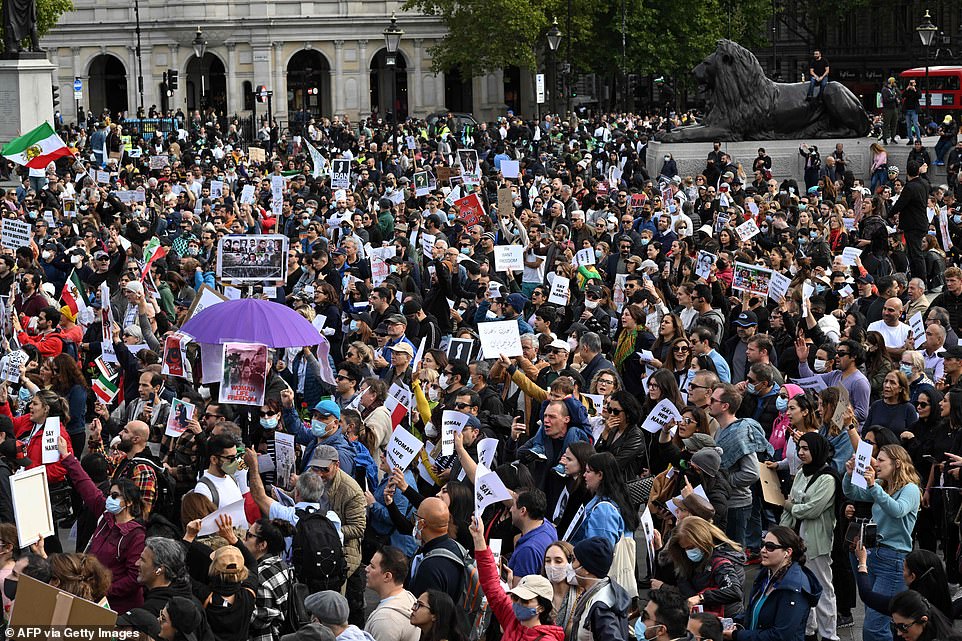 A huge demonstration in support of Mahsa Amini, who was recently tortured and killed by authorities in Iran for not wearing her hijab correctly, erupted in in Trafalgar Square on Saturday 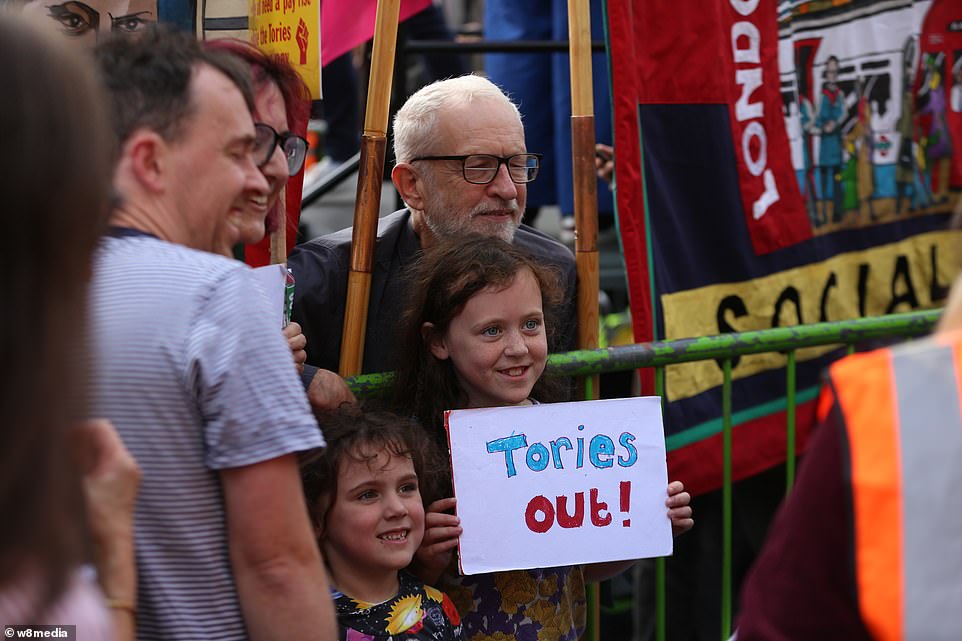 Jeremy Corbyn poses with children at a protest in central London on Saturday as a girl holds up a sign reading: ‘Tories out!’ 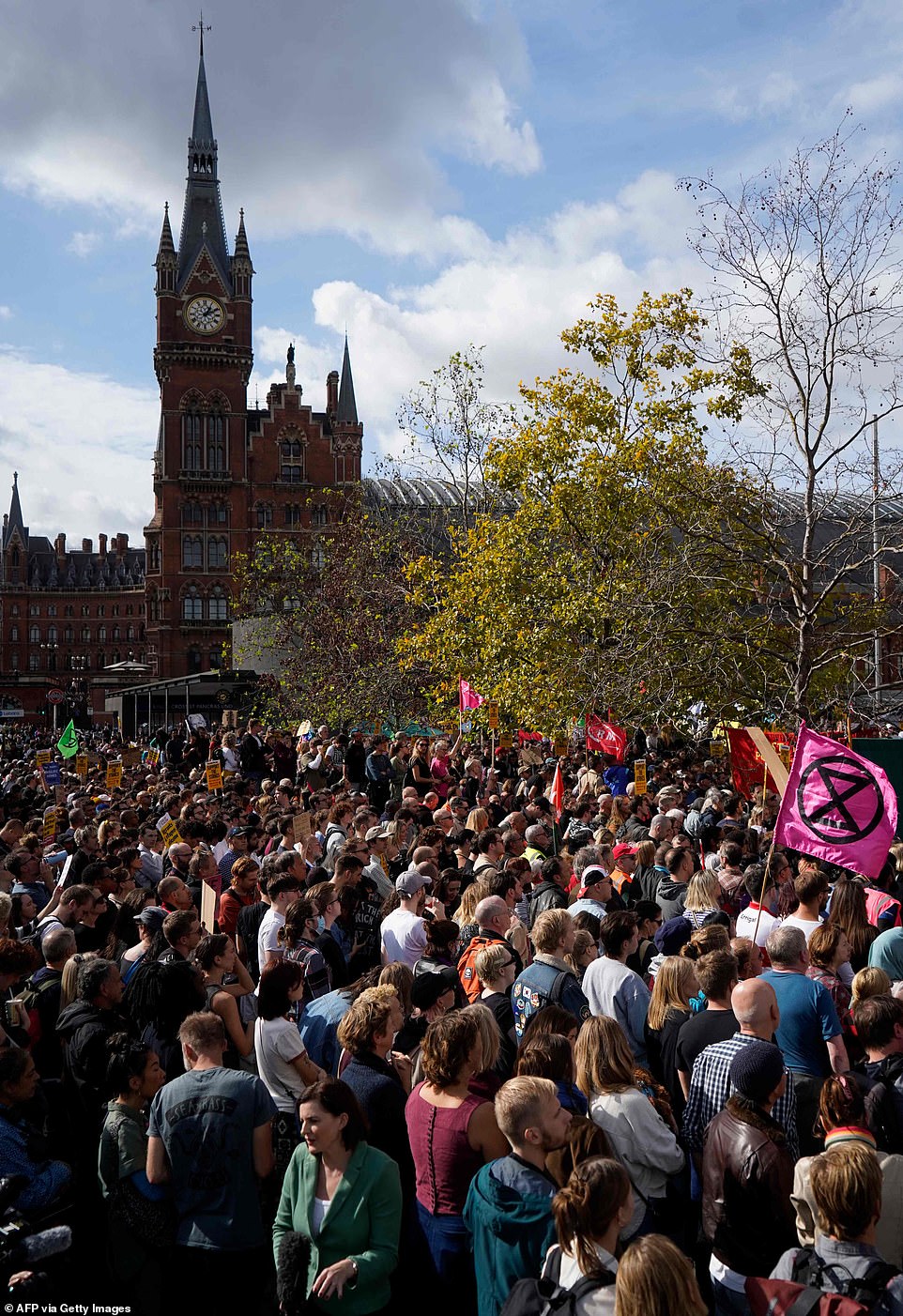 Protesters hold up flags and placards at a protest in London on October 1, 2022 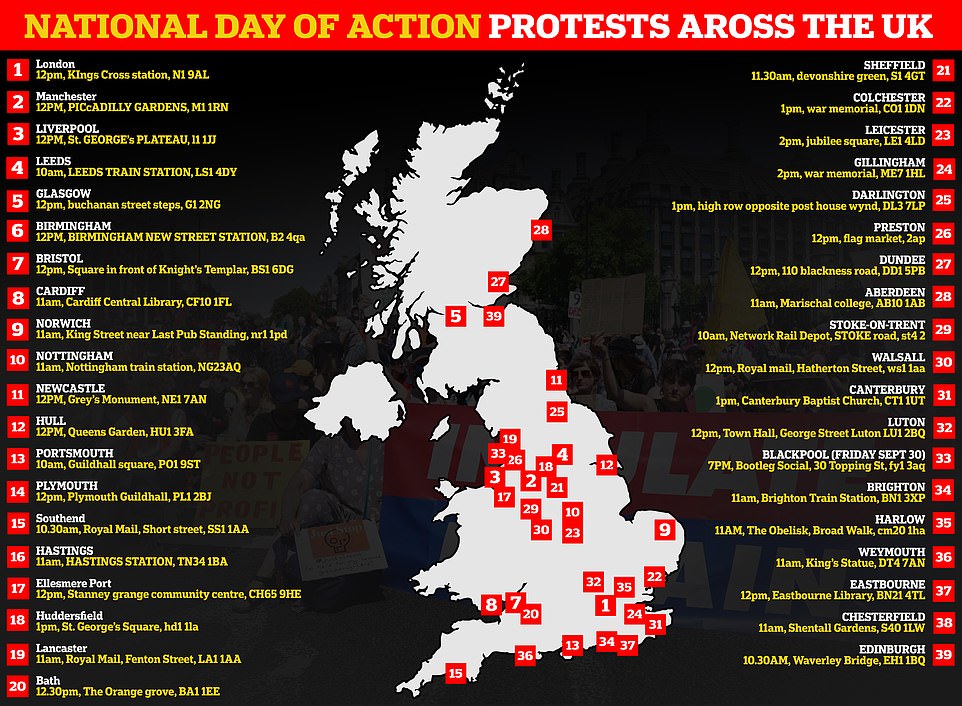 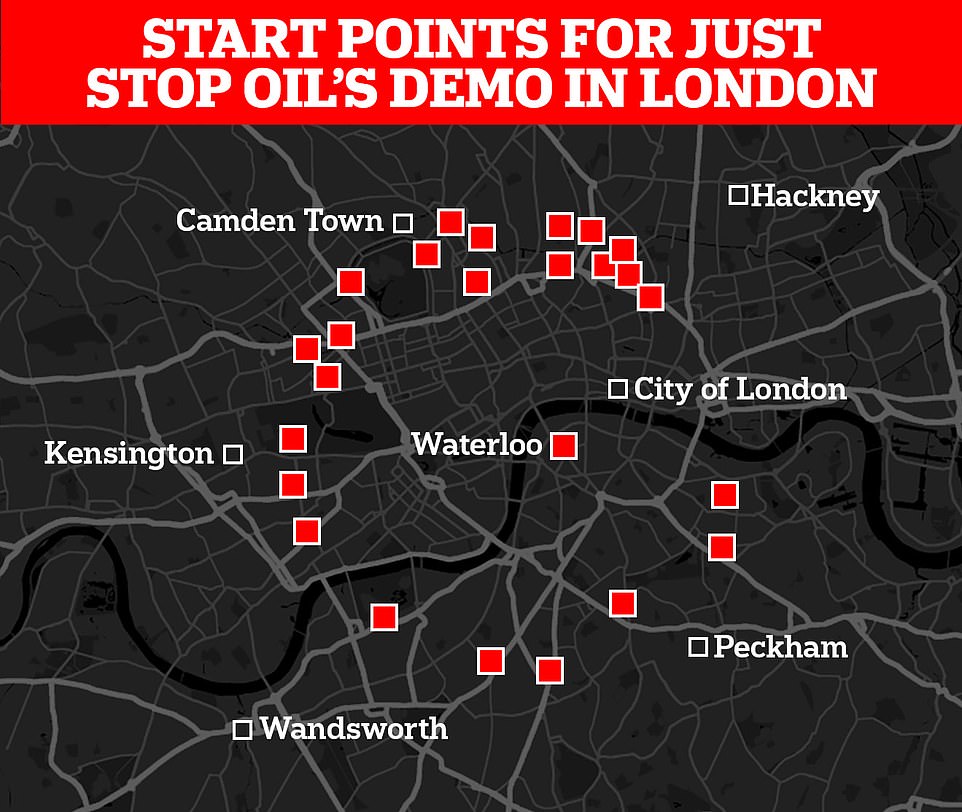 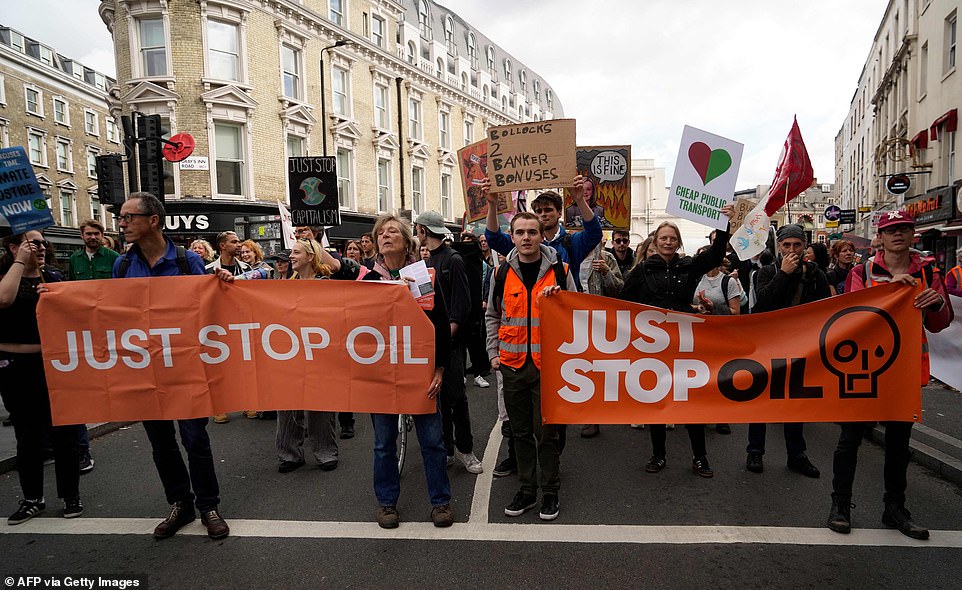 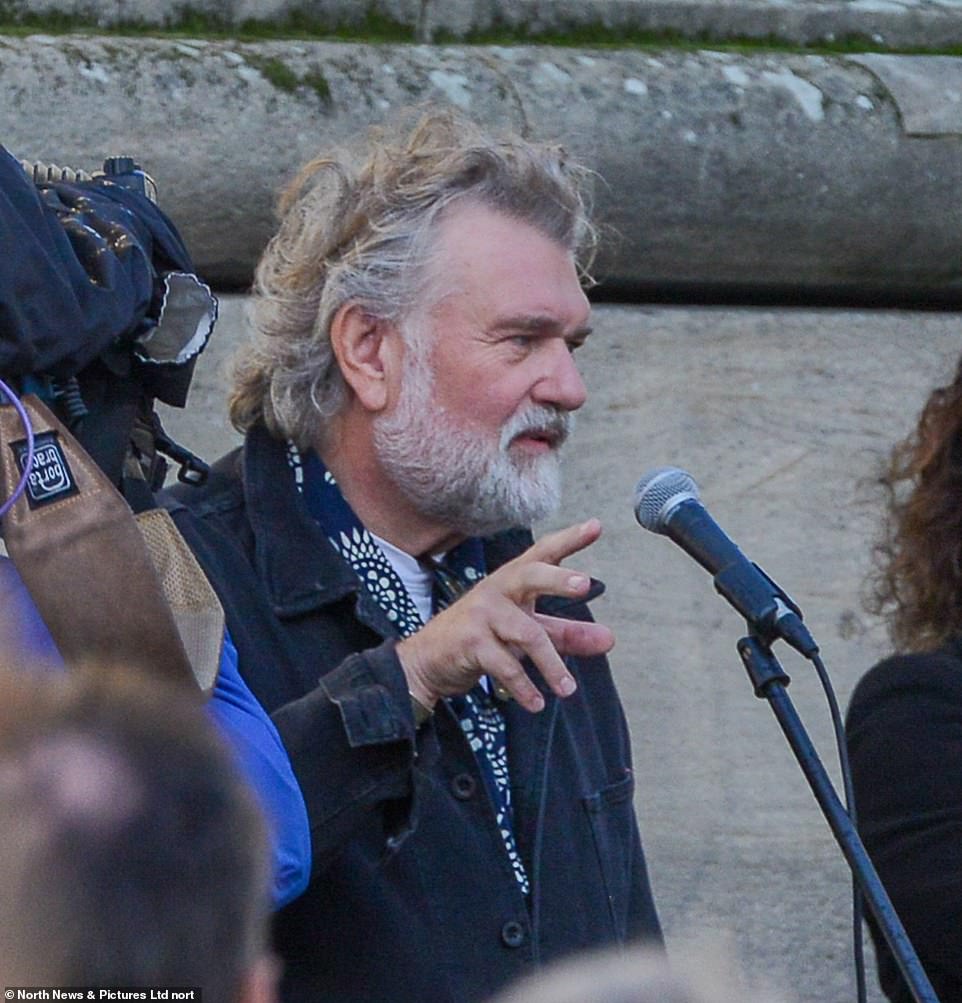 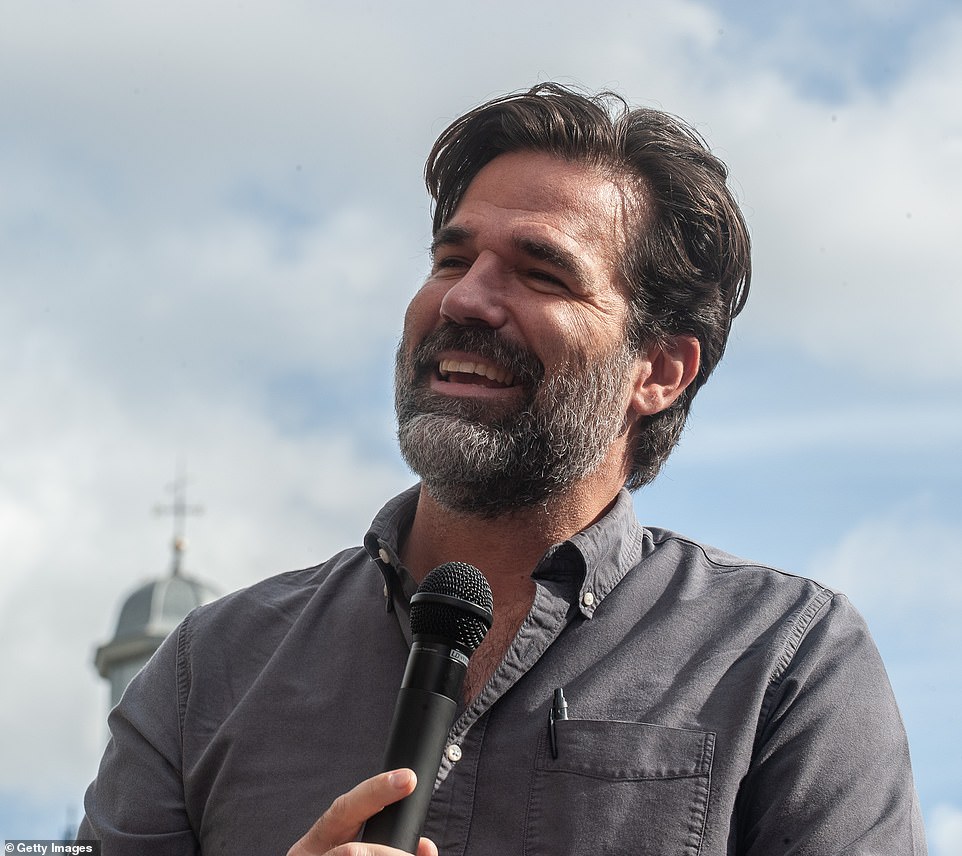 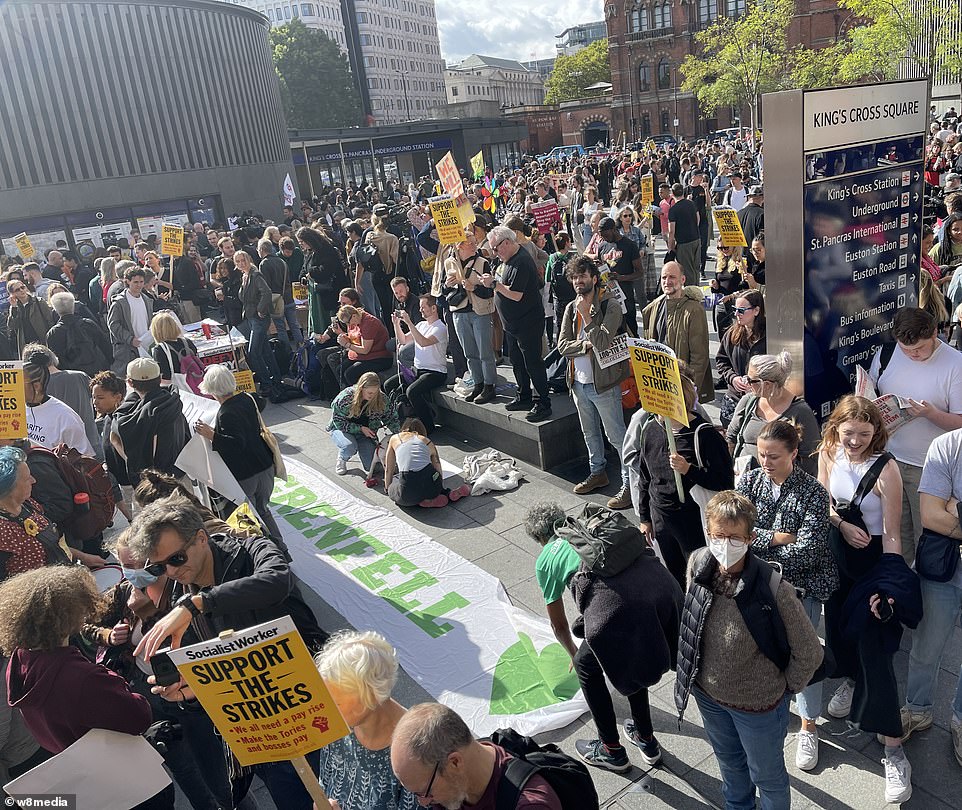 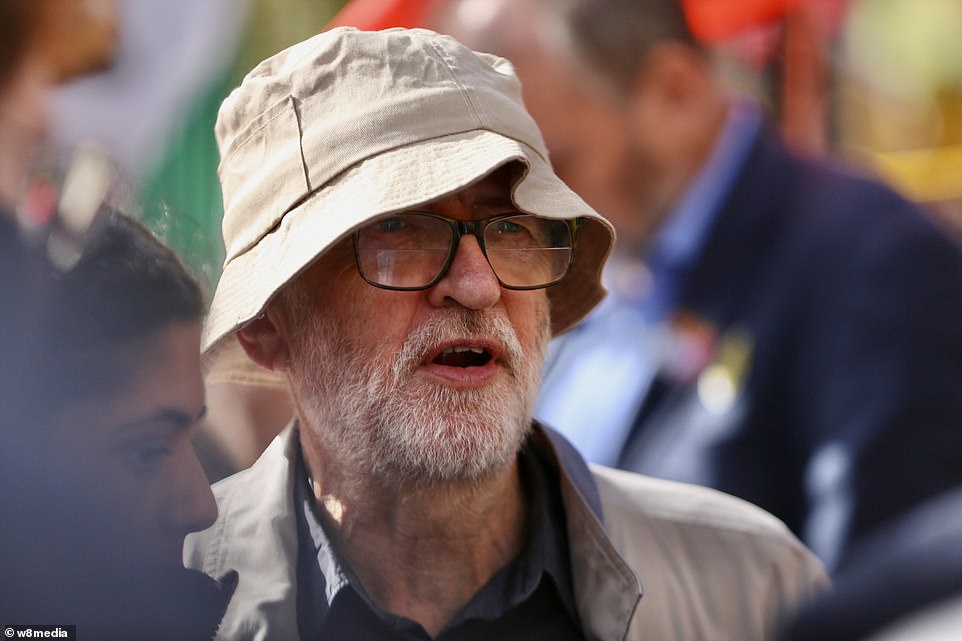 A group of protesters sit on a step in central London holding up signs reading: ‘Sit for climate’ 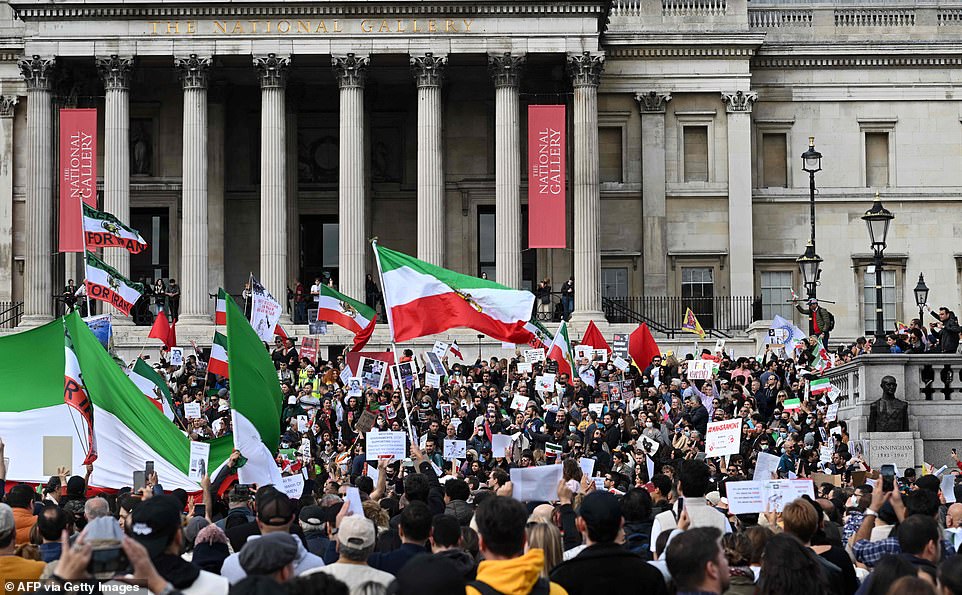 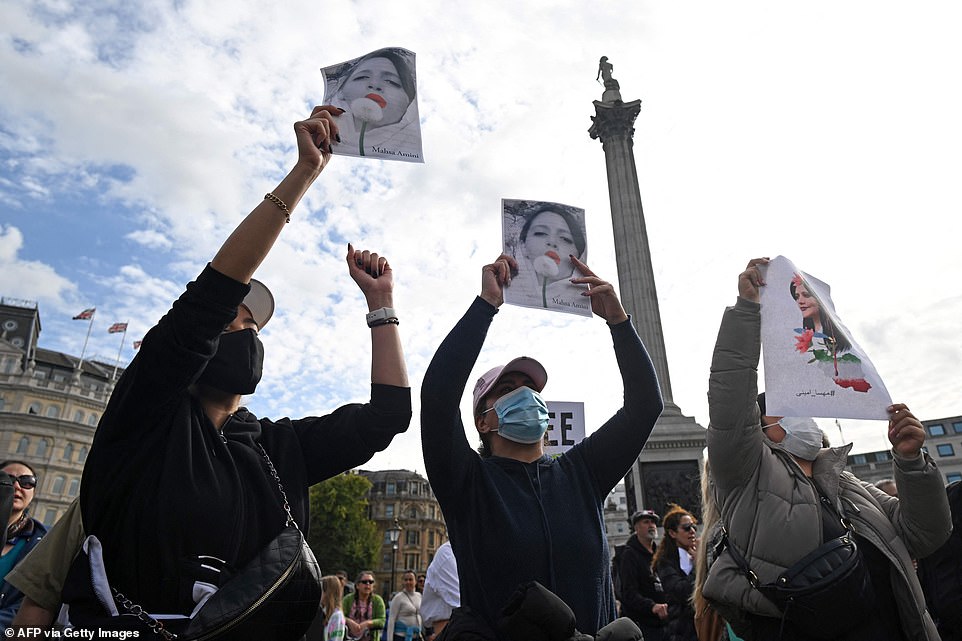 Protesters hold photographs of Kurdish woman Mahsa Amini, who was tortured and killed by Iranian authorities 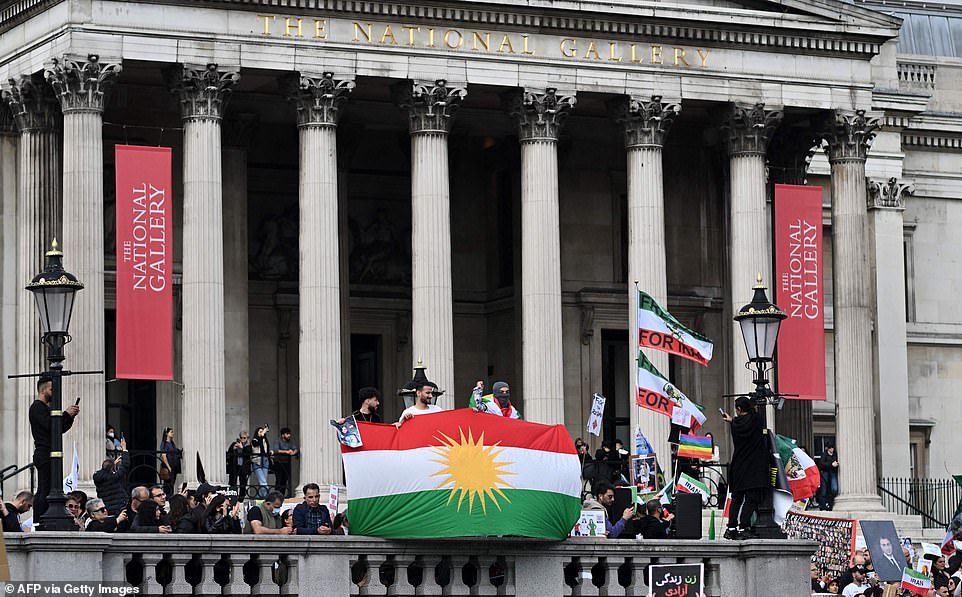 Protesters gather in support of Kurdish woman Mahsa Amini during a protest on October 1, 2022 in Trafalgar Square 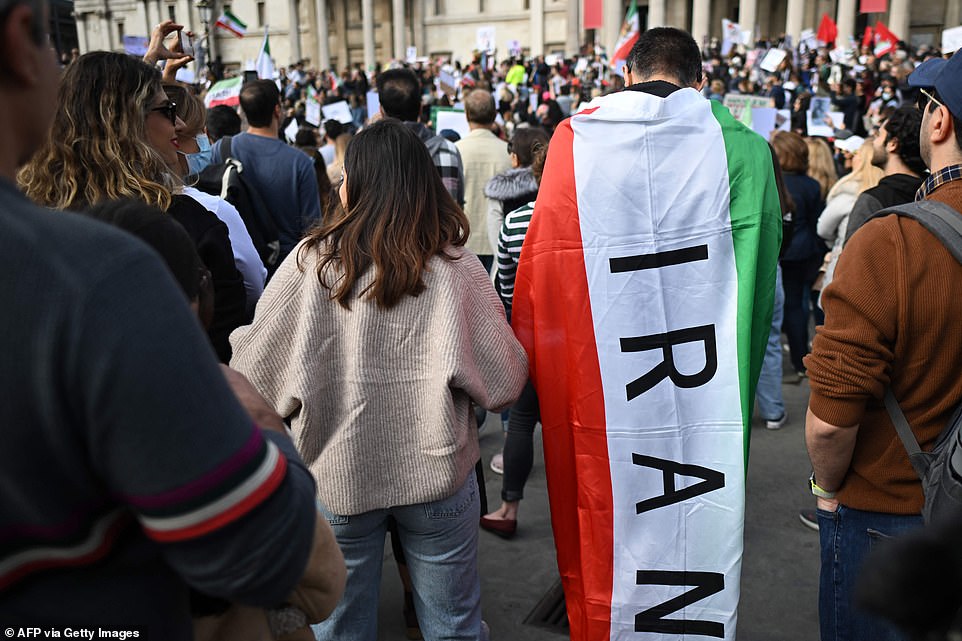 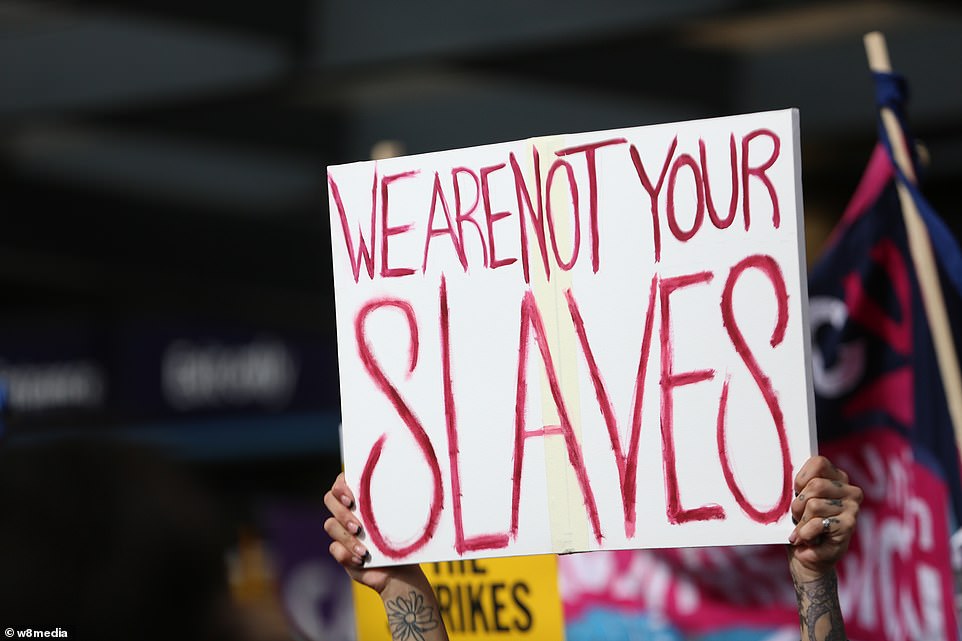 ‘We are not your slaves’: Protester holds up banner in support of the strikes outside Kings Cross station on Saturday 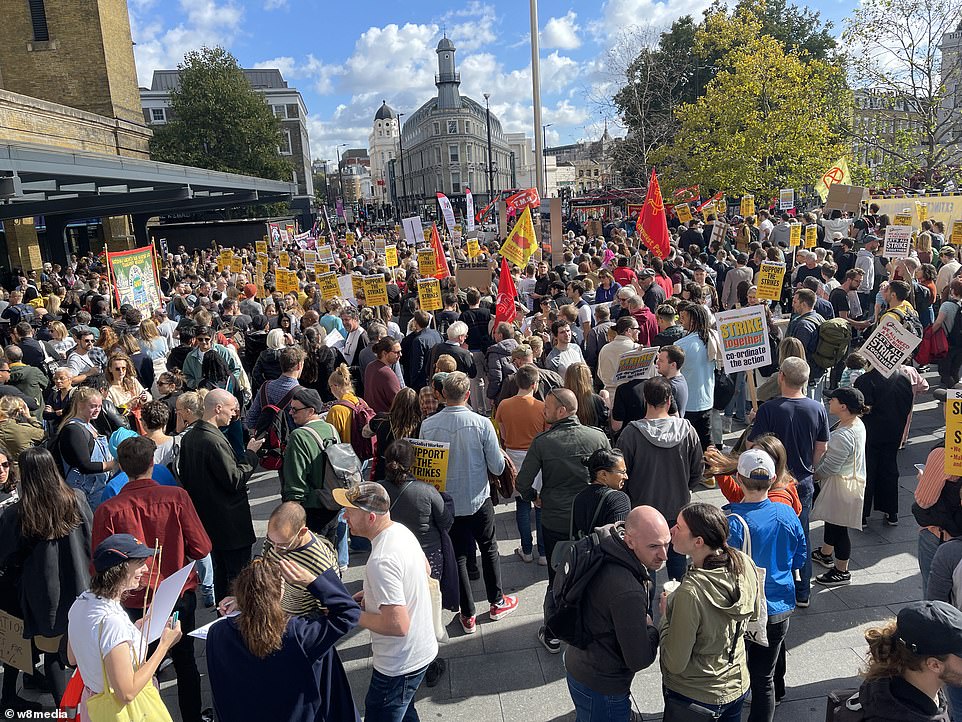 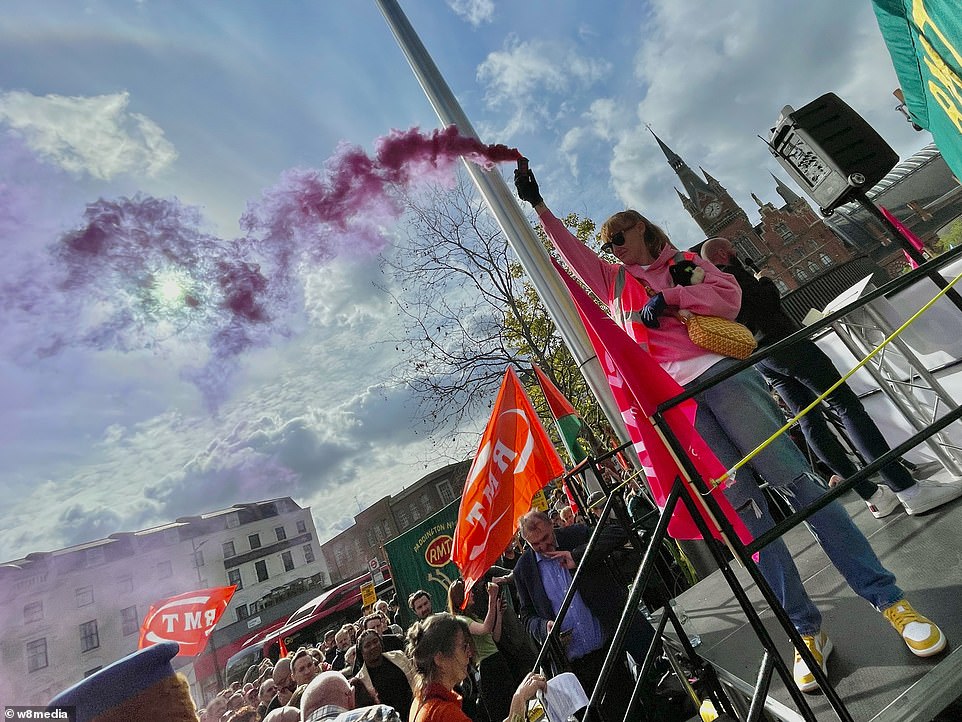 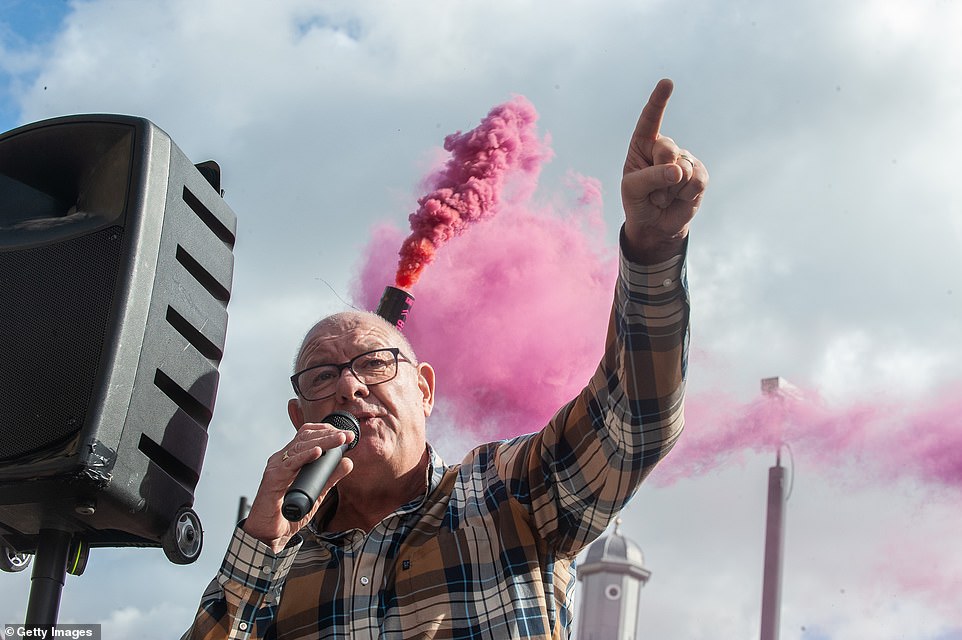 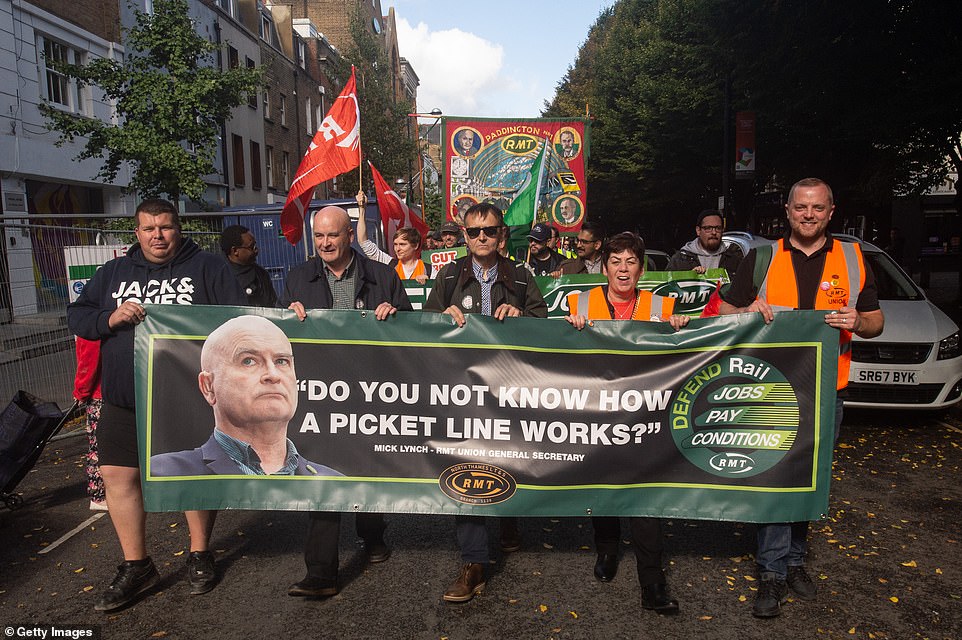 RMT members march from their nearby headquarters to the Enough is Enough rally outside of Kings Cross station on Saturday, led by their general secretary Mick Lynch (pictured second from left) 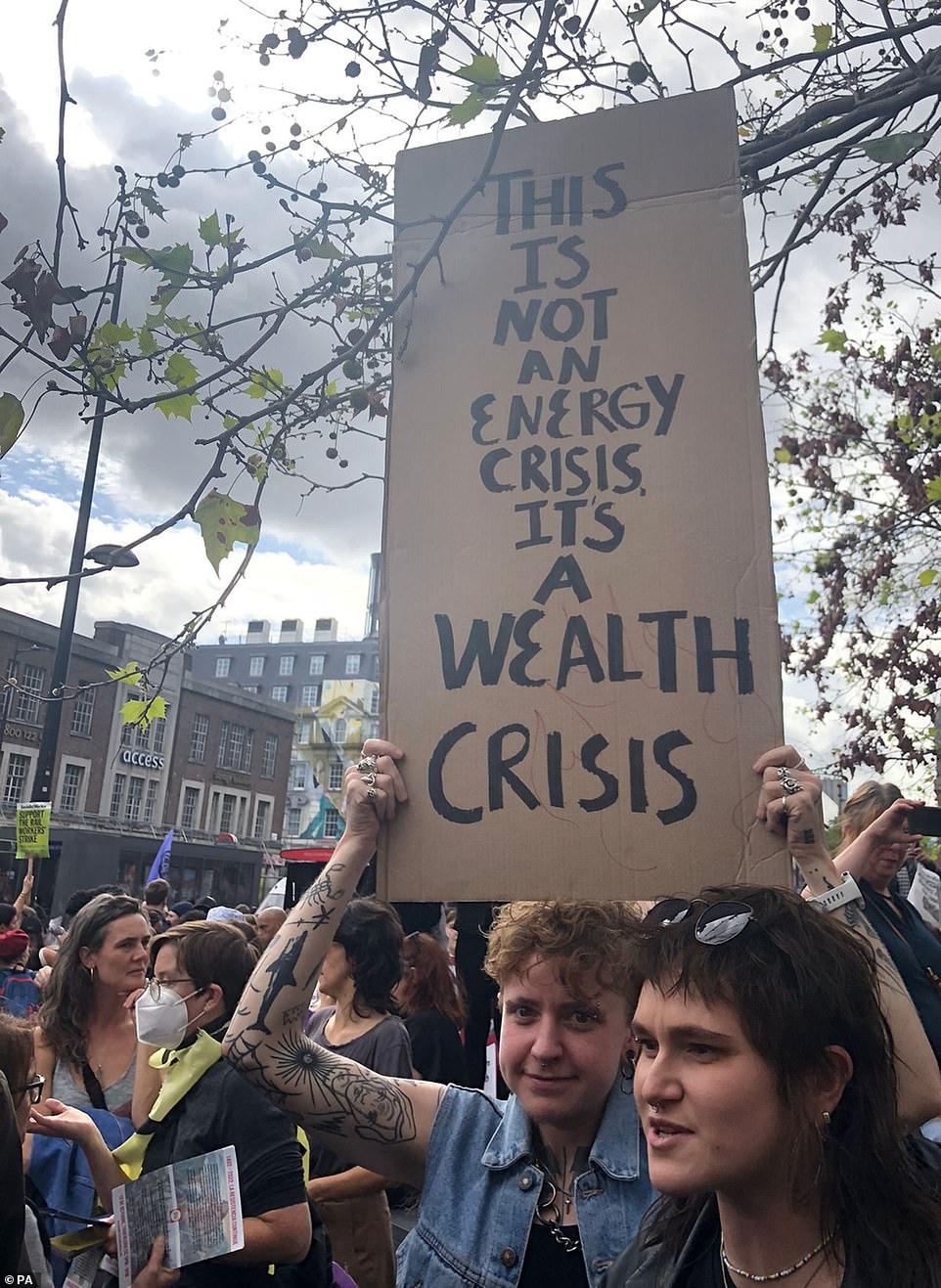 ‘This is not an energy crisis, this is a wealth crisis’: Protester holds up sign at Enough is Enough rally in central London on Saturday 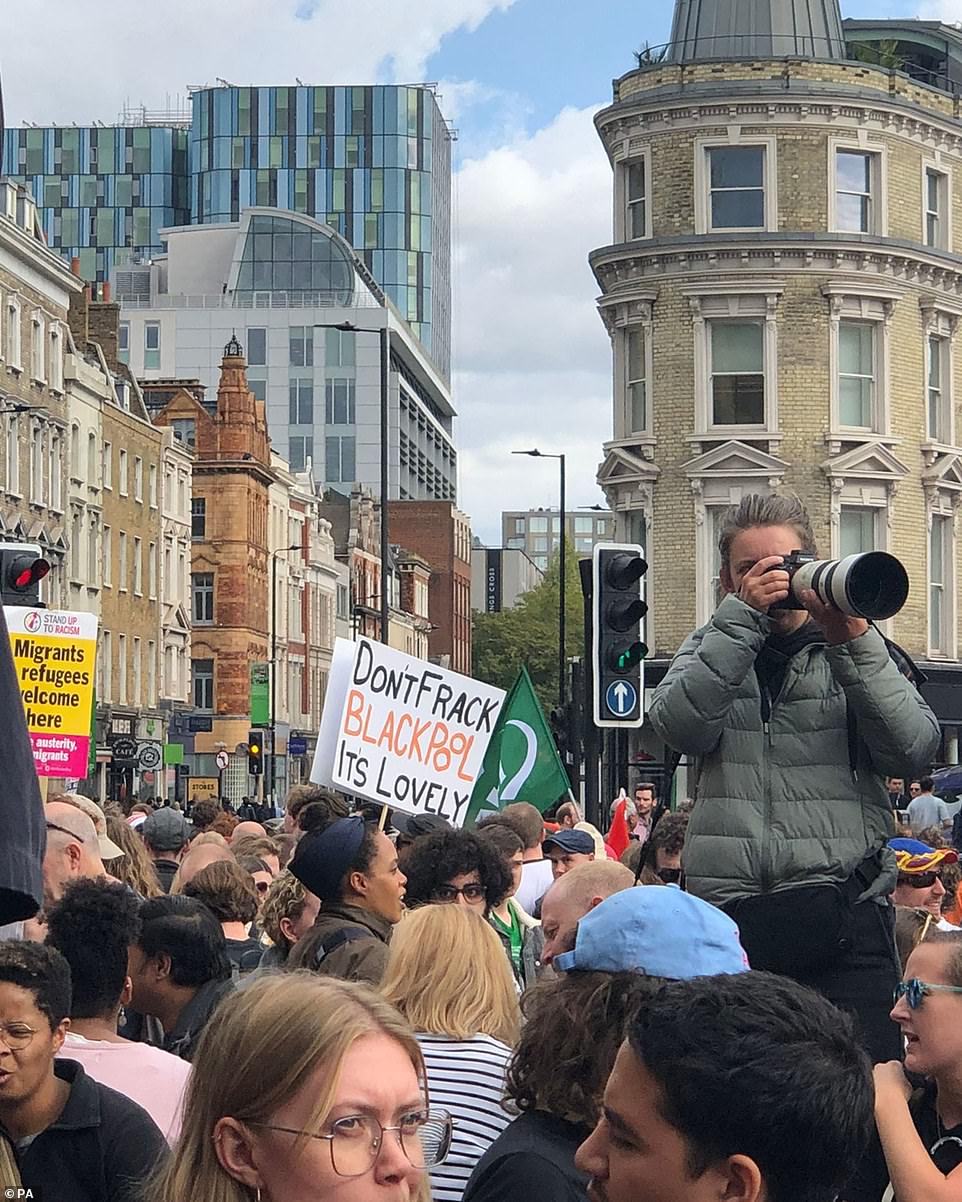 The demo had been scheduled to begin at around 11am when volunteers assembled at 25 starting points across London including Waterloo, Paddington and Euston stations.

The groups plan to converge at Westminster to ‘demand an end to the economic and moral madness of continued oil and gas expansion’.

Just Stop Oil’s found Roger Hallam was revealed by The Mail on Sunday to have said that Metropolitan Police would be ‘too scared’ to arrest activists at first but that it would be forced to do so as the protests escalate.

He said the group was aiming to identify and recruit 1,500 people prepared to get arrested twice in London during the campaign.

Another activist, a former businessman in his late 40s, told a meeting in Norwich earlier this month: ‘We’ve talked to people in the judicial system and they reckon the system couldn’t really cope with about 3,000 arrests.’

The group began its project on April 1 and since then has seen 1,296 arrests as the protestors demanded the government end new oil and gas projects in the UK.

Julie Hesmondhalgh, who played Coronation Street’s Hayley Cropper, will be speaking at the Manchester rally alongside Lamin Touray, who played footballer Ashley Hardcastle on the street.

Newcastle’s event has been backed by Si King, one half of the Hairy Bikers, as well as poet Tom Pickard.

Award-winning comedian Rob Delaney will join the Rail Maritime and Transport union’s Mick Lynch and Dave Ward of the Communication Workers Union, at the London event.

Rob Delaney said: ‘Does a chief executive need an extra zero at the end of their salary, or should nurses, posties and teachers be able to heat their homes this winter? Enough is enough.’ 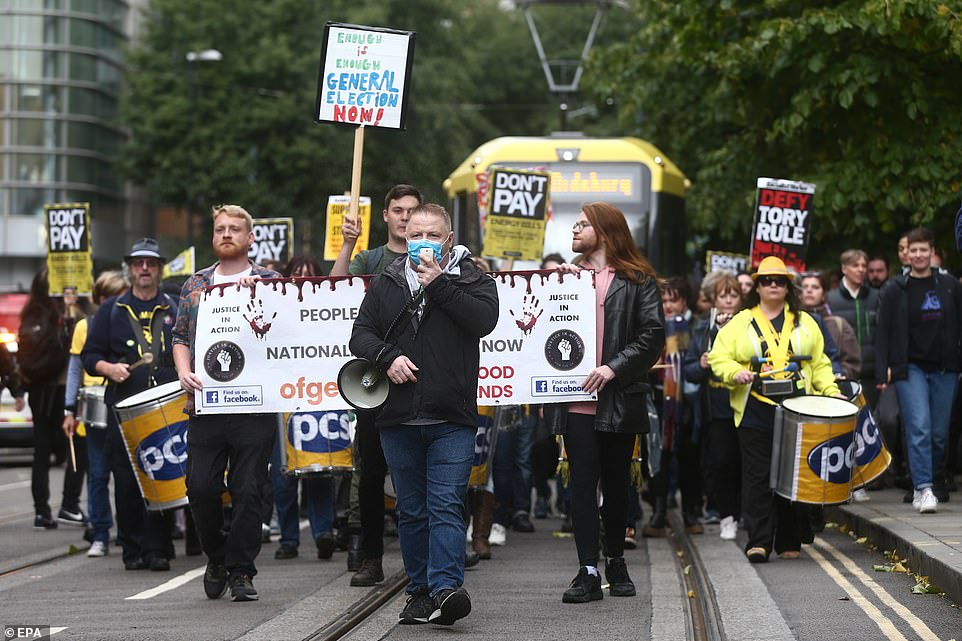 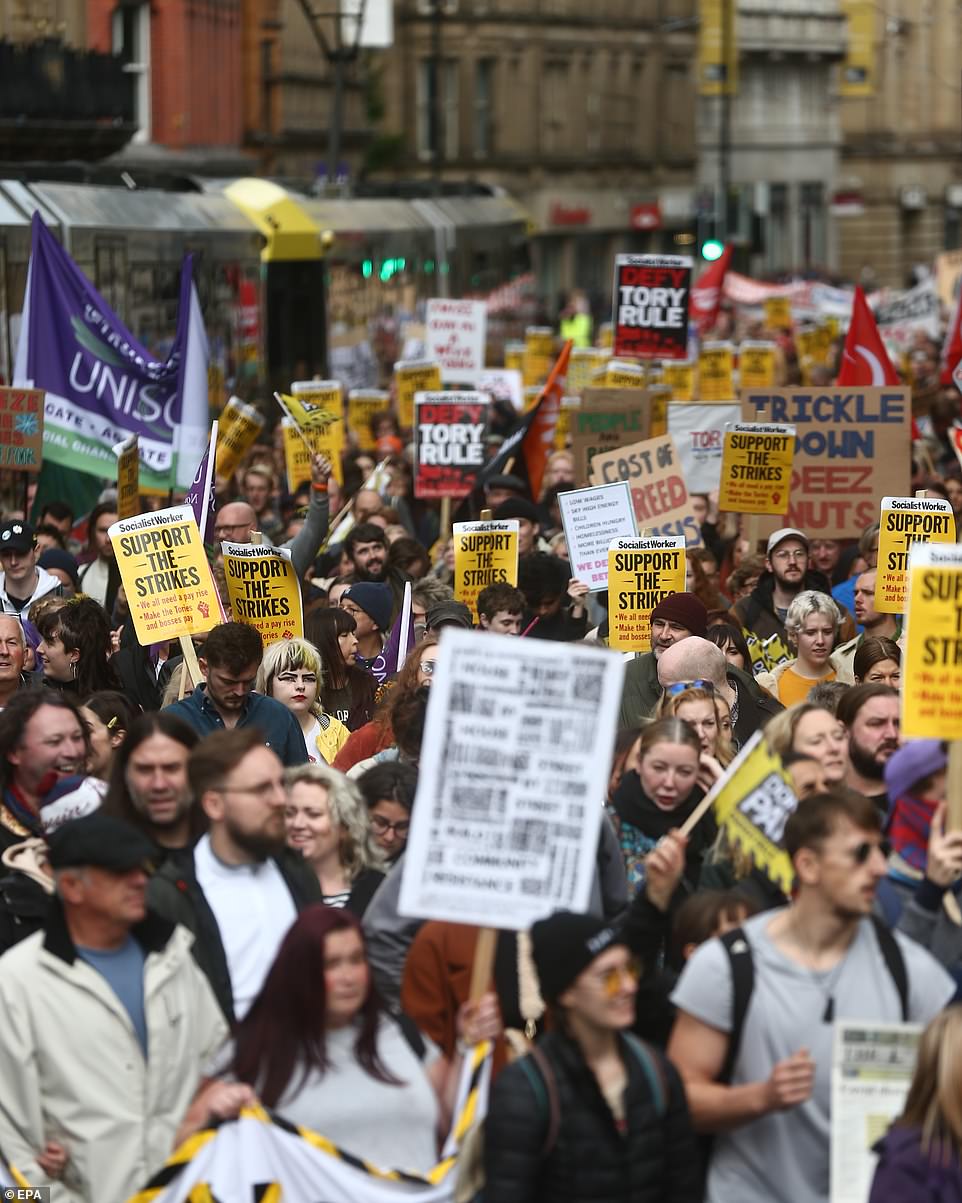 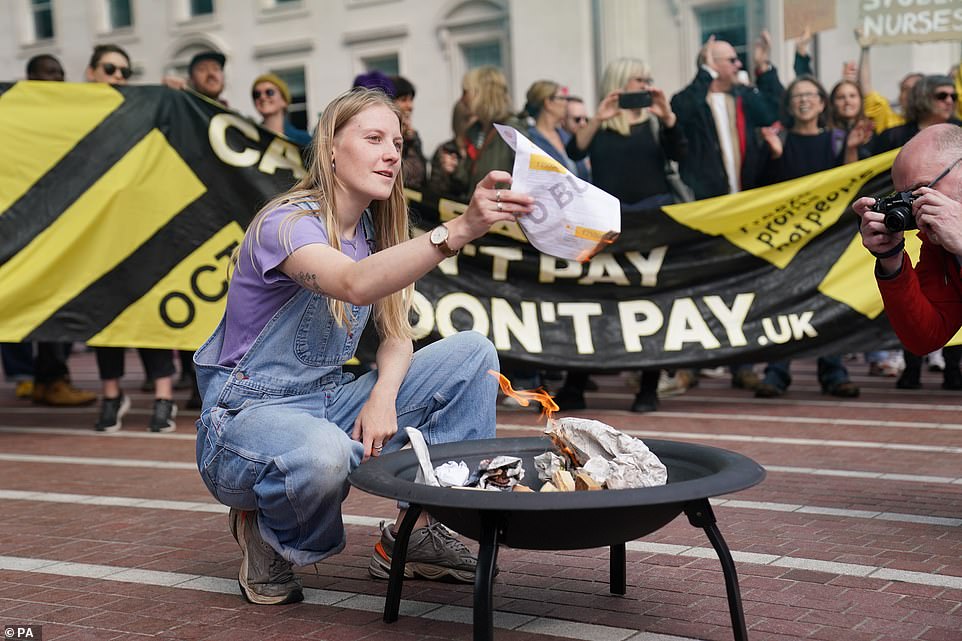 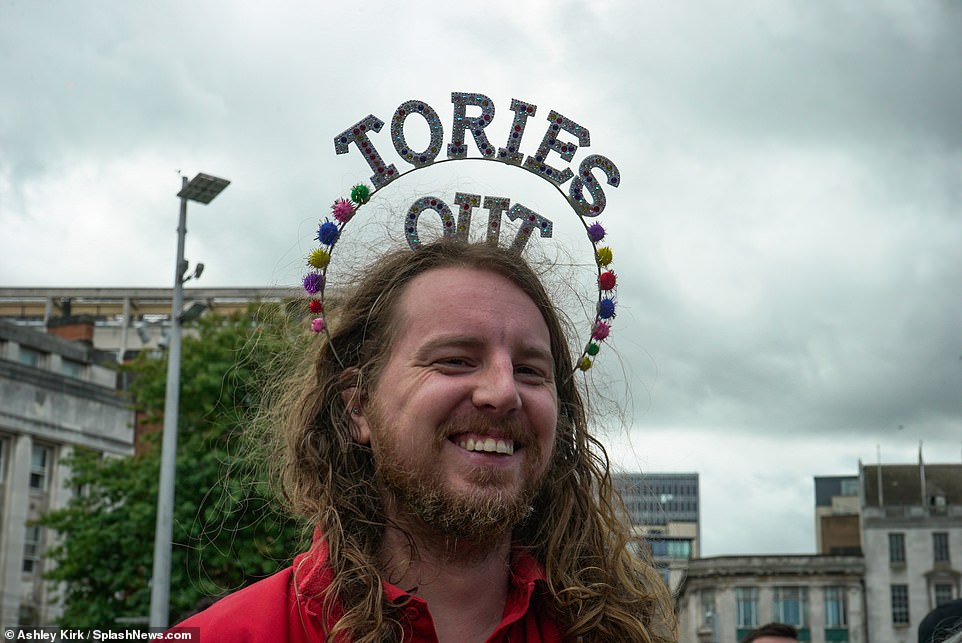 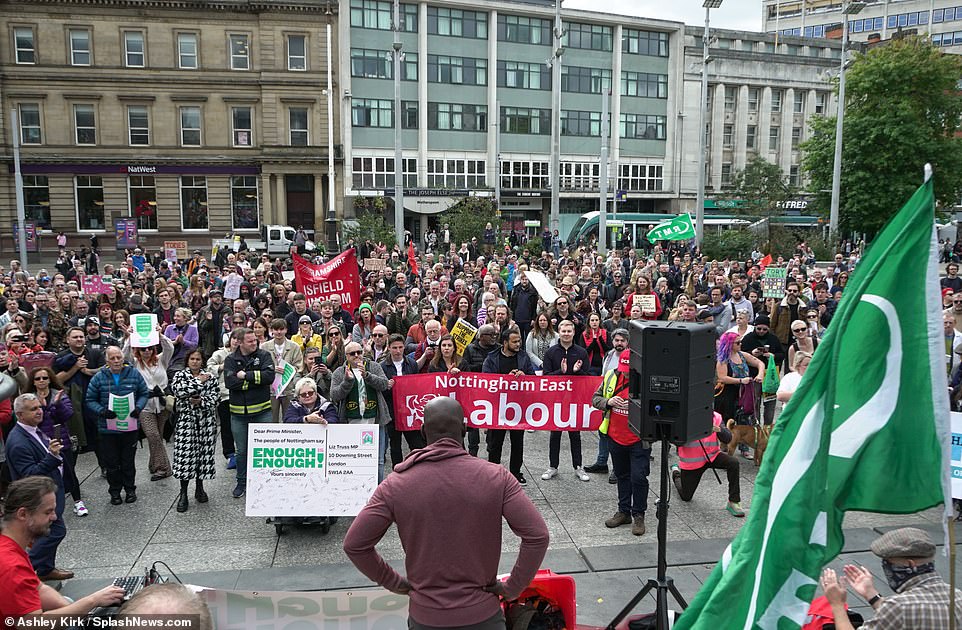 Protests in Nottingham as part of the national ‘Enough is Enough’ campaign, sparked by the cost-of-living crisis 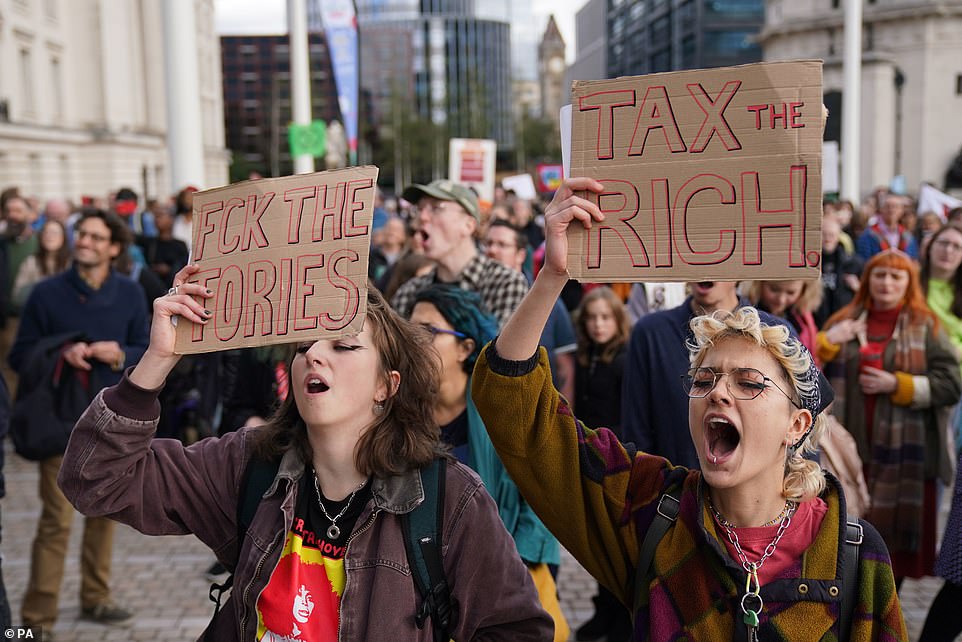 ‘Tax the rich’: Protesters hold up signs during cost-of-living demo in Birmingham on Saturday 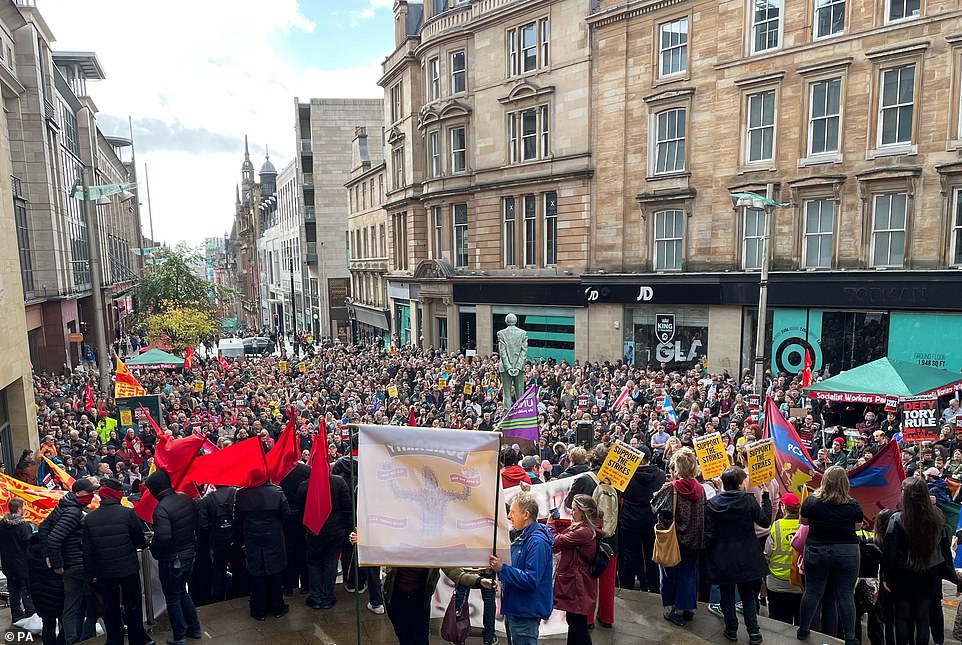 The protests are coinciding with picket lines being mounted by railway workers outside major stations across the country as part of the latest strike in the long running dispute over pay, jobs and conditions.

Former Coronation Street actor Lamin Touray said: ‘I saw the Enough is Enough campaign and just thought, that’s exactly what everyone is feeling.

‘I don’t think anyone remembers when times have been this hard. (The) Government needs to sit up and listen to the people – it can’t go on like this.’

Hairy Biker, chef and presenter, Si King said: ‘Millions of hardworking people and families across our country are being forced into poverty and utter desperation due to the cost-of-living crisis.

‘We have a system that favours corporate power and wealth over normal people. Those in power have neither the will nor the empathy to change it.’

A Just Stop Oil spokesman said: ‘We are currently witnessing the breakdown of all we hold dear. Our government has not ‘got this’ – they are increasing the grip of fossil fuels at our throat.

‘If the government won’t stop approving new oil and gas projects then we will make them stop. Come to Westminster from October 1 to peacefully join thousands of other ordinary people in civil resistance because our lives depend on it.’

Jeremy Corbyn, the founder of the Peace and Justice Project, said: ‘Record breaking weather is happening everywhere and everything is too expensive. That’s the crisis. You can’t separate out the cost of living and climate crises. The whole system, which creates billionaires and starves hundreds of millions, is the crisis. It can’t be resolved, it must be overcome and transformed.’

Stuart Bretherton, 24, Energy For All Campaign Coordinator, Fuel Poverty Action said: ‘The climate crisis and the cost of living crisis are a direct result of how our economy is run for the benefit of an energy industry that will chew us up and spit us out.

‘But at the same time we have common solutions to both these crises. Climate justice doesn’t mean further hardship, it means warm homes, lower bills, cleaner air and a better economy for every one of us.’

Lee Jasper of Blaksox, said: ‘The west relentlessly pumps out its carbon gas to feed its insatiable consumer economies, while the poorest people on the planet, in the global south endure climate catastrophe, famine and drought, whose people are being sacrificed to maintain unsustainable western lifestyles. We need climate change and climate justice.’

Zita Holbourne, chair of Black Activists Rising Against Cuts, (BARAC UK) said: ‘The issues of climate displacement, environmental injustice, migration, colonialism, reparations and systemic racism are all interconnected and part of the same struggle for racial justice and human rights globally. There can be nothing about us without us and until all of us are free, none of us are free.’

Liam Norton, from Insulate Britain, said: ‘The government’s plan to open new oil, gas and coal projects is the biggest act of government criminality in our history. They are participating in the destruction of this country and the murder of countless people around the world. What else can you call it? In order to stop new oil and gas we need to Insulate Britain. Now.’