Thousands of excited revellers have arrived for Britain’s second post-lockdown rave at a Liverpool nightclub tonight.

Nightlife promoter Circus is hosting The First Dance in Liverpool – where revellers do not have to wear face coverings or social distance for the first time since before lockdown began.

Crowds were seen queuing up outside for the final night of the two-day event, as some posed for pictures clutching bottles of wine and beer.

Tonight’s lineup – to be headlined by Fatboy Slim – comes after crowds packed the floor in the Bramley-Moore Dock warehouse to dance shoulder-to-shoulder for the first time in more than a year last night.

Club-goers were seen hugging and kissing each other, with some sitting on others’ shoulders for a better view of the stage, where DJ Yousef, Lewis Boardman and The Blessed Madonna performed.

Ravers have to take a lateral flow test 24 hours before the event in order to release their e-ticket, and have to produce a negative result to gain entry.

They are then asked to take another test five days after the rave and submit the results. 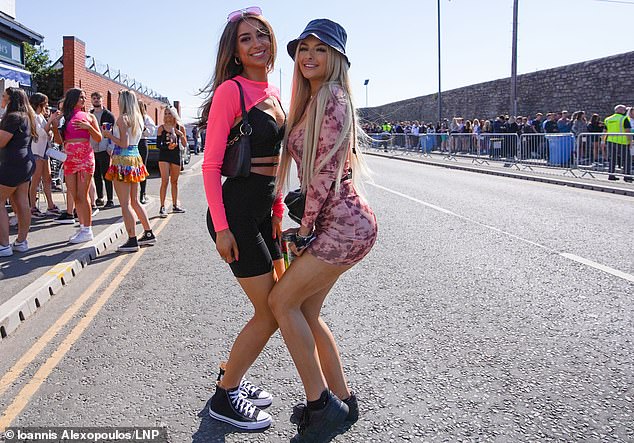 Nightlife promoter Circus is hosting The First Dance in Liverpool – where revellers do not have to wear face coverings or social distance for the first time since before lockdown began. Pictured: Revellers posing outside 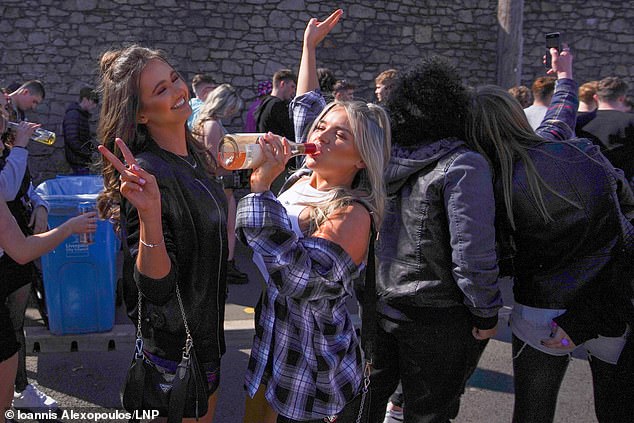 Crowds were seen queuing up outside, as some posed for pictures clutching bottles of wine and beer 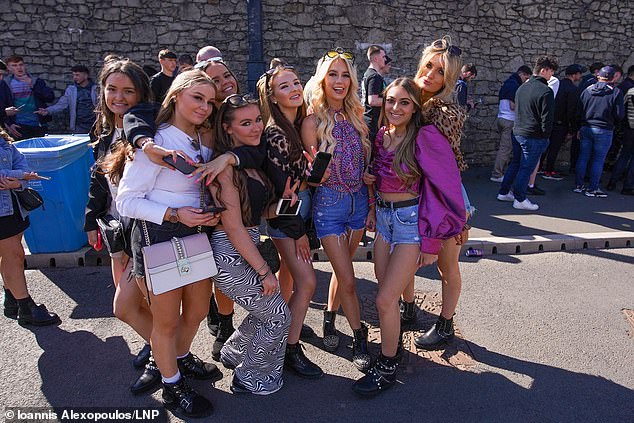 Tonight’s lineup – to be headlined by Fatboy Slim – comes after crowds packed the floor in the Bramley-Moore Dock warehouse to dance shoulder-to-shoulder for the first time in more than a year last night. Pictured: Groups posing outside tonight’s event 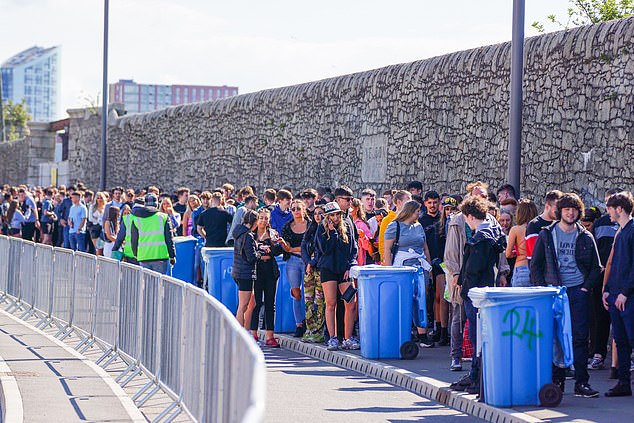 Tonight marks the final night of the pilot programme, and will also see DJs Yousef, Hot Since 82 and Enzo Siragusa take to the stage.

The pilot event which last night saw around 3,000 clubbers return to the dancefloor has been hailed as a glimpse of what the future might hold by public health leaders.

Liverpool director of public health Matt Ashton said it was ‘wonderful’ to see the looks on people’s faces at The First Dance, hosted by club night Circus, in the city on Friday.

Mr Ashton told BBC Breakfast on Saturday that the event gave a glimpse of what the future might hold but stressed it was still a scientific experiment about how more events could be opened in the future.

He added: ‘This is a scientific experiment, both before and after the event people have to return to doing the things they are supposed to, so following the rules in place. 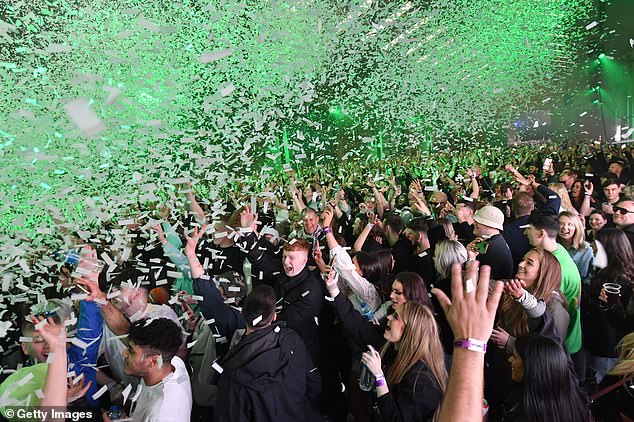 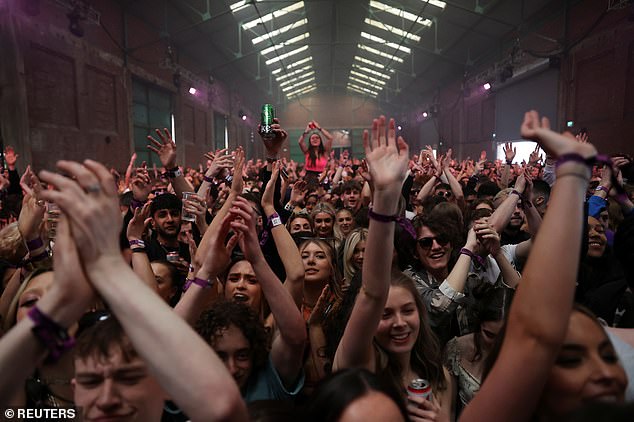 ‘We have to deal with Covid still as if it is still around because it is, even if it is at low levels, so we have to be cautious in our approach. And for me that’s why it is so important that we collect the science around this to allow us to do this safely and properly in the future.

‘But it is still wonderful to see the looks on people’s faces as they were at the event last night. It just gives a glimpse of what think we think the future might hold.’

When asked if the data from the pilots will be crucial to opening up society again in late June, Mr Ashton said: ‘Yeah, don’t forget this is a crucial part of our economy, in Liverpool it’s over 40 per cent of our economic output, so it’s really important we start to get the economy opening again.

‘But also just in terms of a return to normal life, all of us being social creatures and doing the things we want to do more. 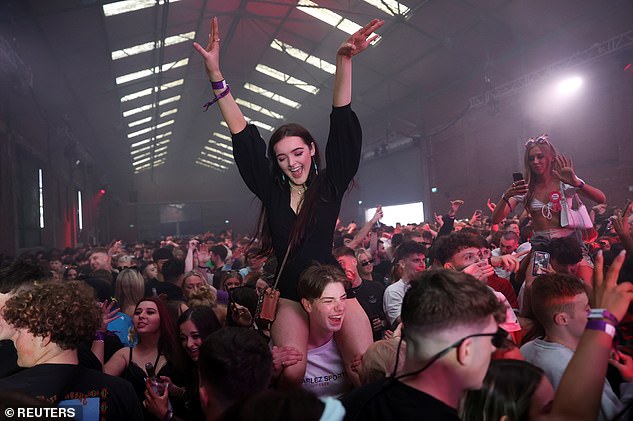 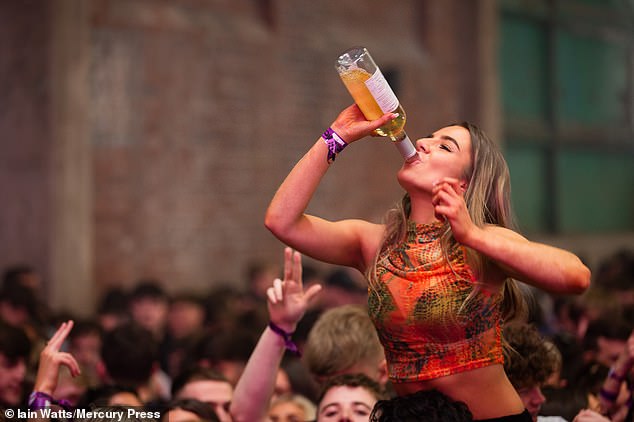 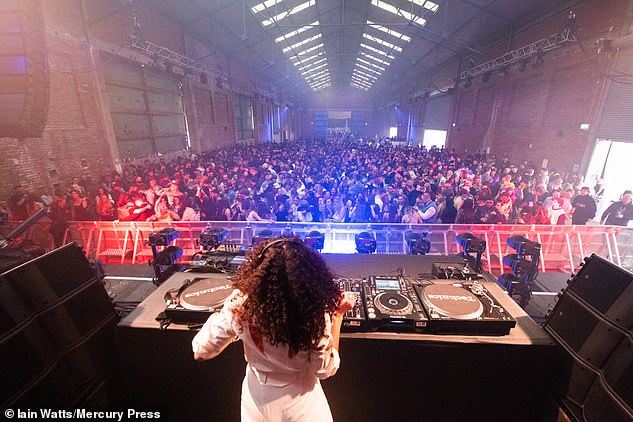 A crowd of ravers are pictured in Bramley-Moore Dock, Liverpool, during a nightclub rave test event

‘So the evidence base is absolutely essential.

‘This is going to be part I think of a longer journey of understanding how we live with Covid more safely in the future.’

Speaking to BBC Breakfast on Saturday, DJ Marea Stamper, aka The Blessed Madonna, said that there had been an ‘incredible energy’ at the event, and it had also been ‘incredibly emotional’.

She added: ‘I think we felt excited but also proud to be a part of creating the protocols that would lead to the reopening of all kinds of things, from football matches to any kind of event, it doesn’t have to be a big rave.’ 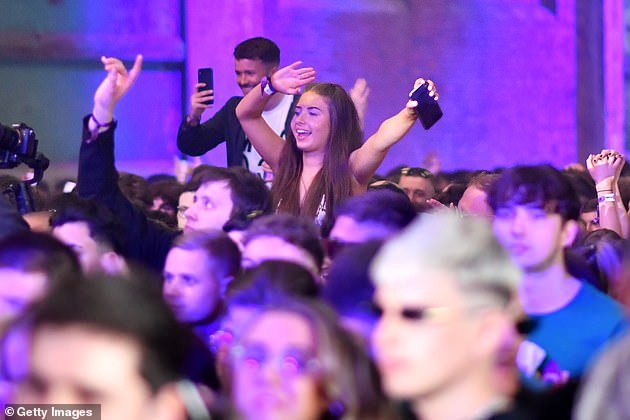 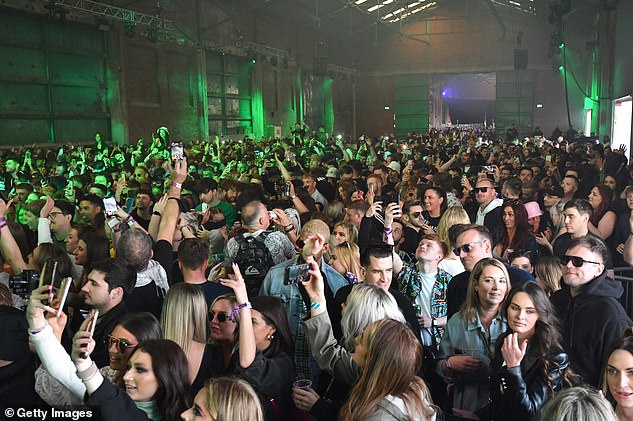 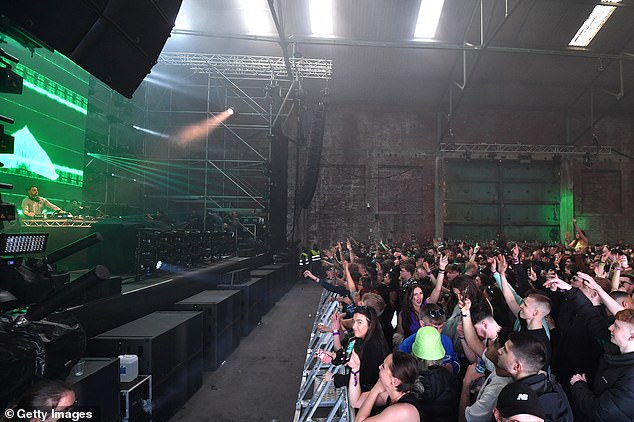 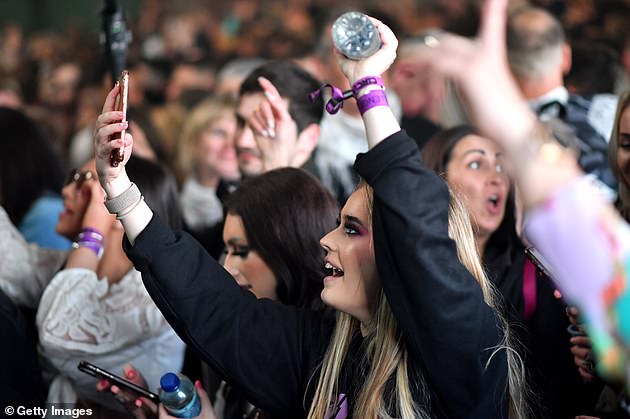 People hold up their phones during the event inside a warehouse in the city, dancing shoulder to shoulder for the first time in more than a year 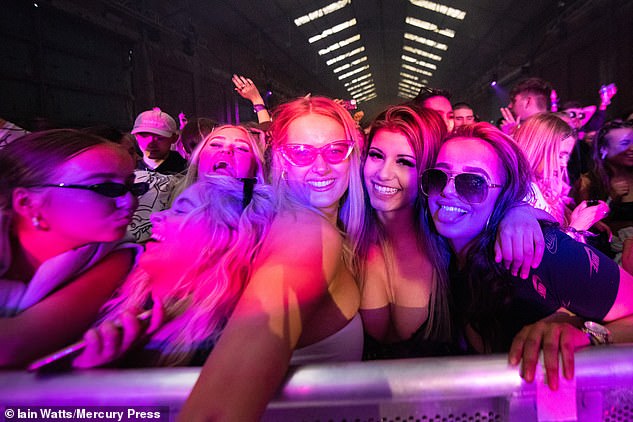 Ravers are seen towards the front of the crowd in Liverpool tonight. Three thousand people are expected at the event 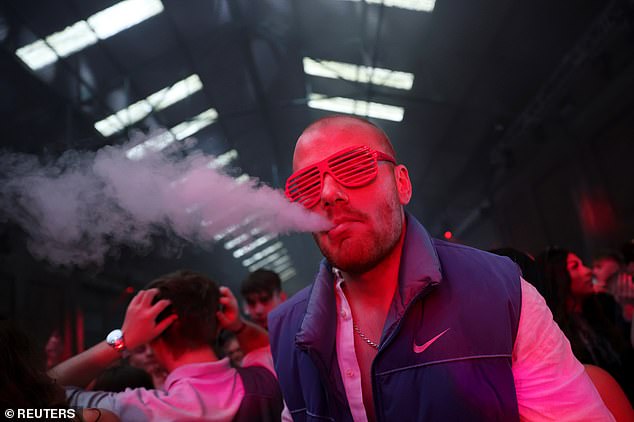 A man enjoys his time at the UK’s first post-lockdown ‘nightclub’ rave. The trial events are designed to advance the reopening roadmap’s plan to scrap social distancing on June 21 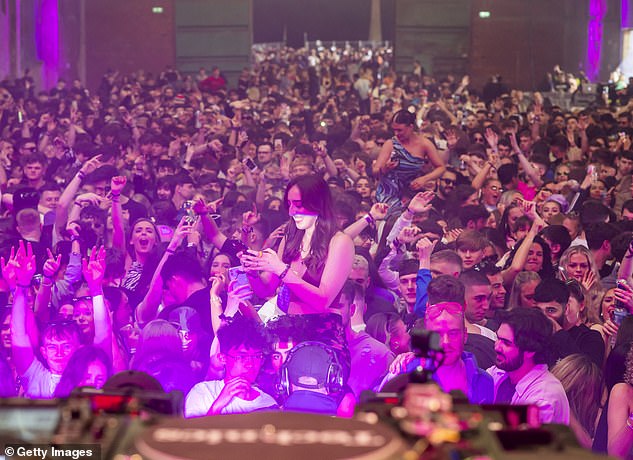 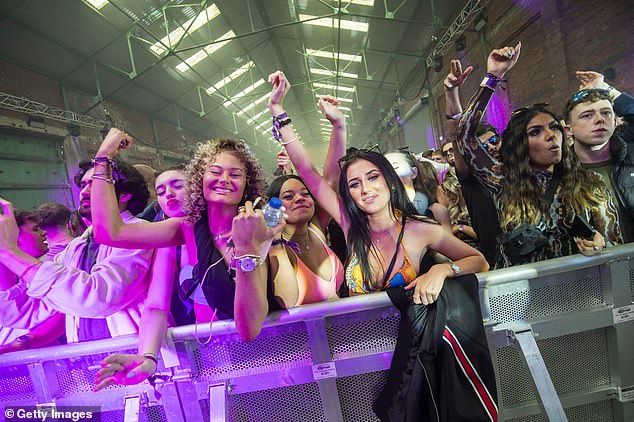 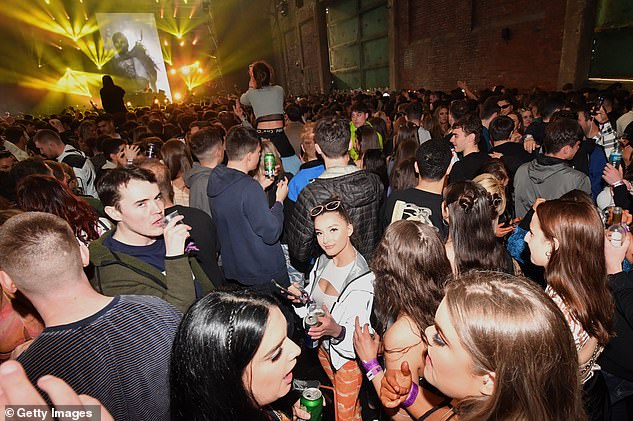 A general view of the dance floor is pictured. The club night is led by scientists, aided by researchers inside to ‘monitor’ crowds and study ‘behavioural’ responses of people after a year of social distancing 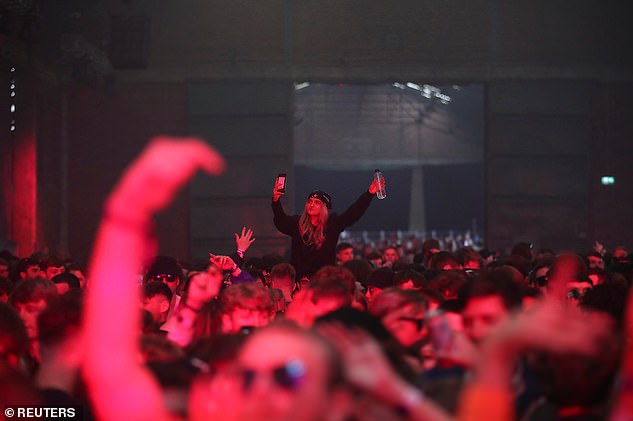 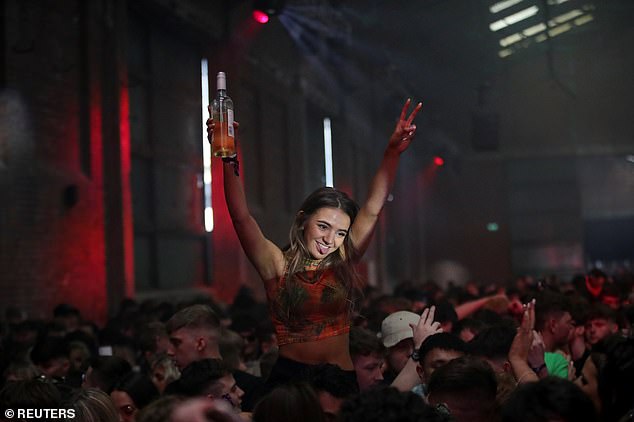 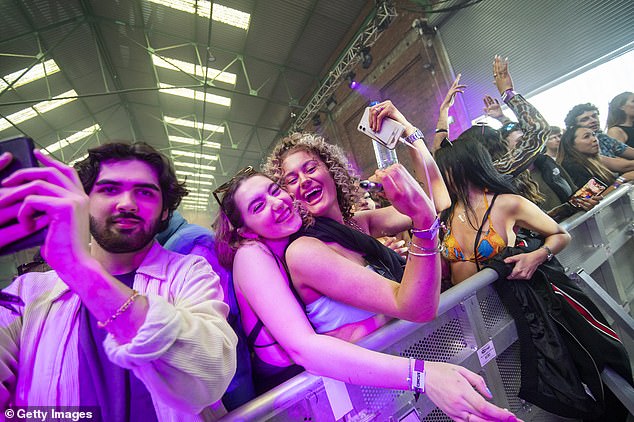 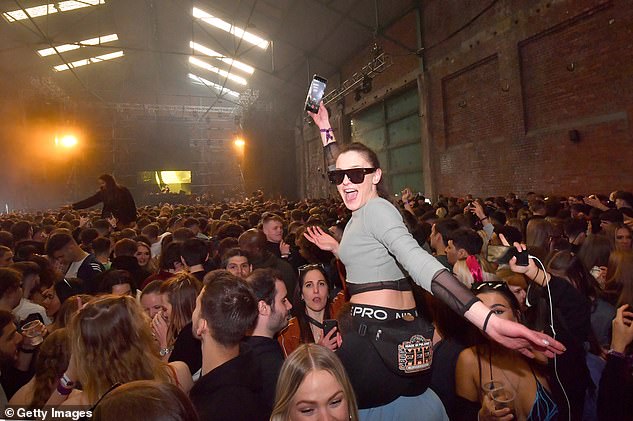 Culture Secretary Oliver Dowden hailed the event as a ‘huge moment on the journey back to normality’ but stressed that further loosening of restrictions will be led by the data.

He said: ‘Although this may seem like life getting back to normal these are science-led events, gathering valuable research as we leave no stone unturned to help us get back to the things we love this summer.

‘We’re testing a range of settings, event set-ups, and systems to find the safest way to welcome back crowds. We are making good progress but we have been clear that decisions on reopening will be led by the data.’

Sam Newson, the event producer, said the pilot was ‘vital’ after the events industry had been ‘decimated’ over the last year.

He said: ‘For the last 12 months, it has been a disaster. 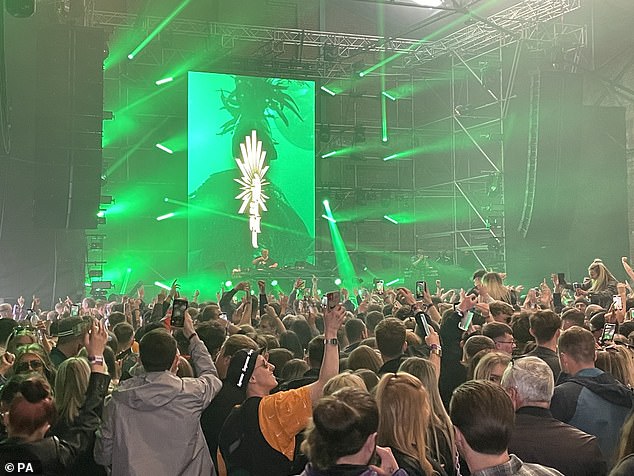 Revellers are seen inside the warehouse for a Covid safety pilot event attended by around 3,000 people 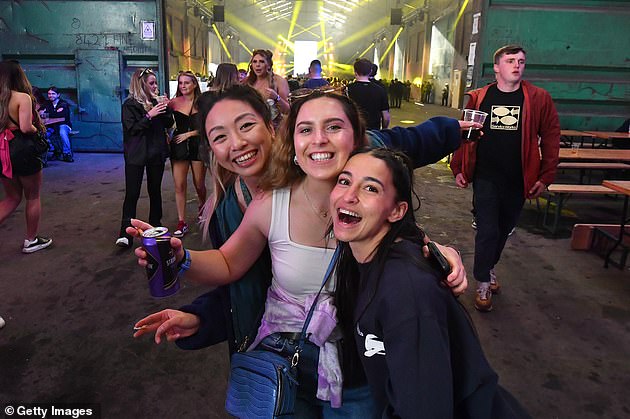 A group of women pose for the camera. People involved in the trial do not need to socially distance nor wear a mask 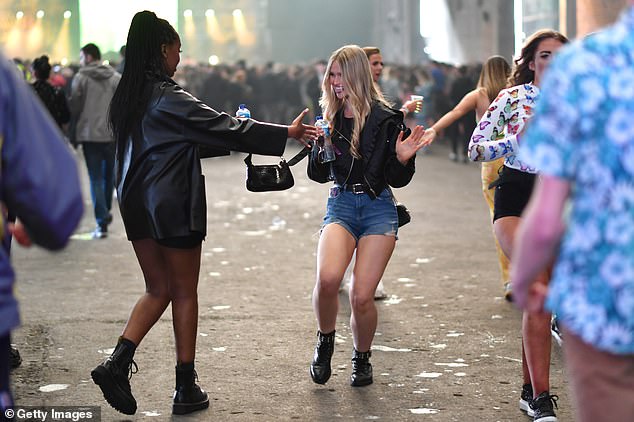 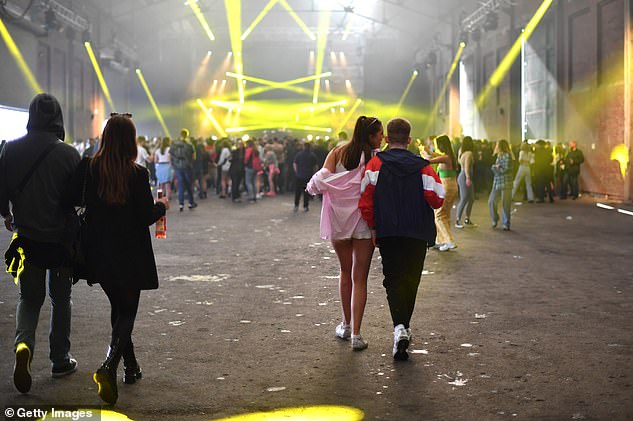 People make their way to the stage area as Circus hosts the first dance event, welcoming 6,000 clubbers to the city’s Bramley-Moore Dock warehouse

‘People have moved on, I’ve got colleagues who have lost houses, it has been incredibly hard and so to try and get this back up and running is incredibly important.’

He added: ‘I stood on stage early on and I had a little bit of a teary eye, I’m not going to lie, it is very emotional.

‘Any event is special but with the amount of work that has gone into this and to be the first in the country in over 12 months, it is very special.’

Scientists will be looking to see whether crowds mixing and dancing indoors increases the risk of transmission of Covid-19.

Air quality and movement was also being monitored as part of a Loughborough University-led study to create clear guidance on how to design and operate non-domestic buildings to minimise risk.

The night is part of the Events Research Programme, which will also see crowds return to events including the FA Cup final and a music festival held in Liverpool’s Sefton Park.