Thousands of anti-vaxxers took to the streets of Paris today to protest against the introduction of compulsory jabs for healthcare workers and vaccine passports.

Police held posts along Paris’ Champs-Elysees to guard against an invasion of the famed avenue by rowdy demonstrators.

Some 3,000 security forces deployed around the French capital for a third Saturday of protests.

Legislators have passed a virus bill requiring the pass in most places as of August 9 as virus infections are spiking and hospitalizations are rising.

Polls show a majority of French support the pass, but some French are adamantly opposed and photos from the French capital show thousands of anti-vaxxers demonstrating across the city this afternoon.

The pass requires vaccinations or a quick negative test or proof of a recent recovery from COVID-19 and mandates vaccinations for all health care workers by mid-September. 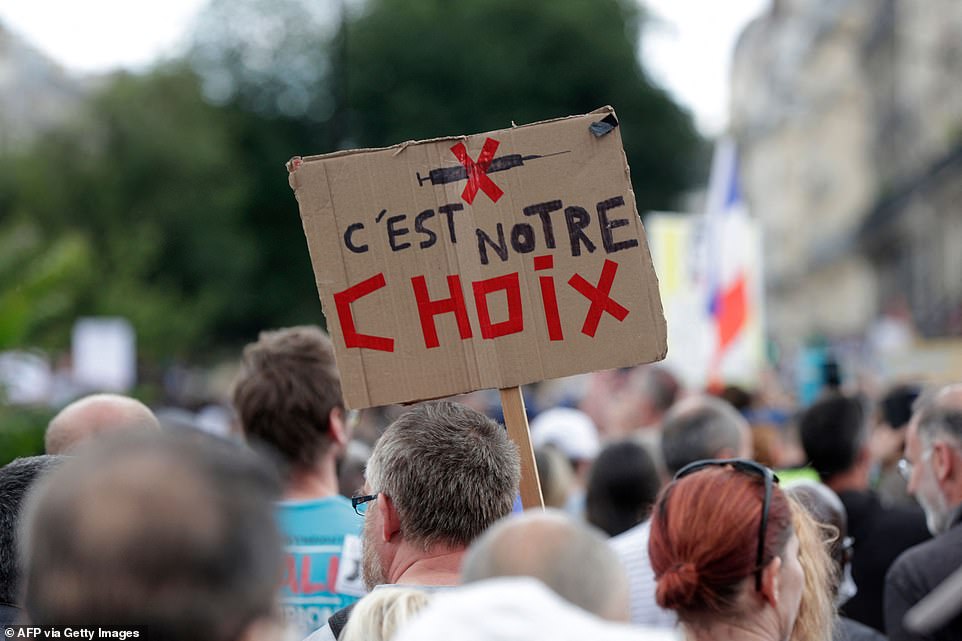 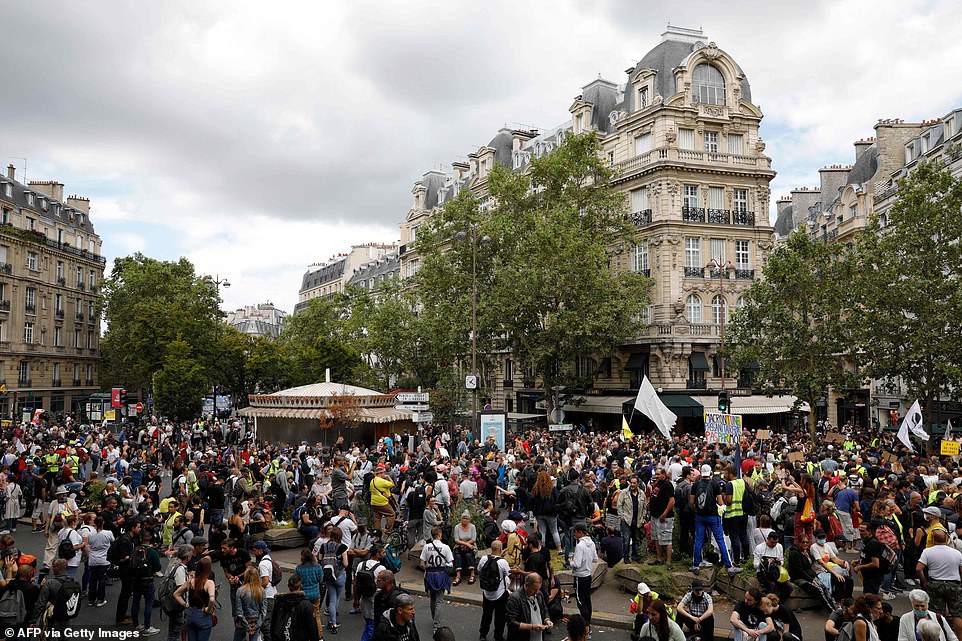 Demonstrators gather at Villiers metro station, northwest Paris, during a national day of protest against the compulsory Covid-19 vaccination for certain workers and the compulsory use of the health pass called for by the French government 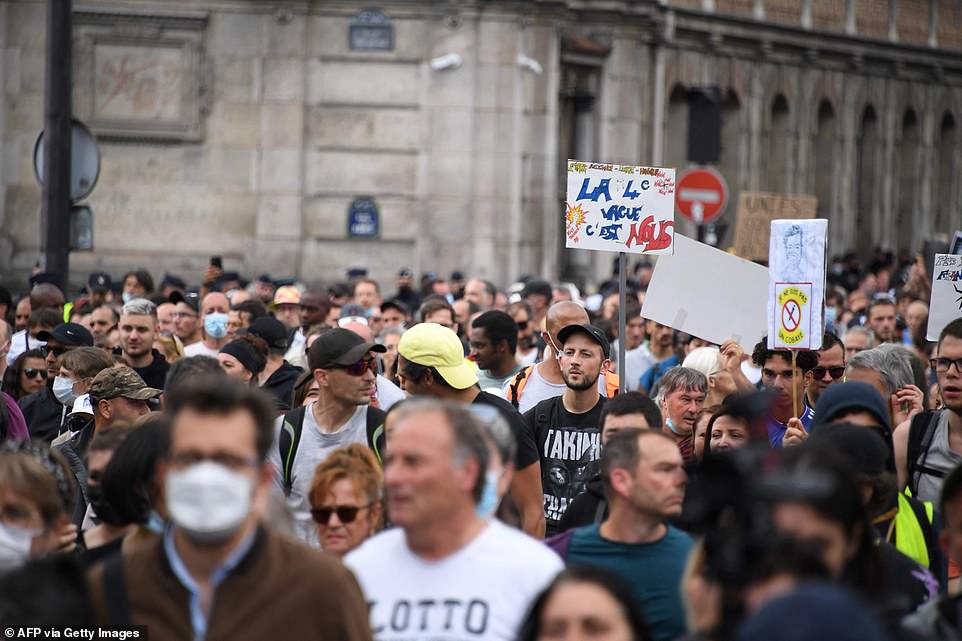 Demonstrators hold up banners and placards, one of which reads as ‘The 4th wave is us’, during a national day of protest

Four separate protests were being held Saturday in Paris, with ‘liberty’ the slogan of the day and marches were also called in other cities around France.

Participants in the two previous weekend protests included far-right activists and die-hard yellow vest protesters as well as others who believe the health pass limits their freedom.

Police used water cannon and tear gas sporadically to deter violence, including after some protesters moved to the Arc de Triomphe, at the top of the Champs-Elysees.

Among those not present this week is Francois Asselineau, leader of the tiny anti-EU Popular Republican Union party and an ardent campaigner against the health pass, who came down with COVID-19.

In a video on his party’s site, Asselineau, who was not hospitalized, called on people to denounce the ‘absurd, unjust and totally liberty-killing’ health pass. 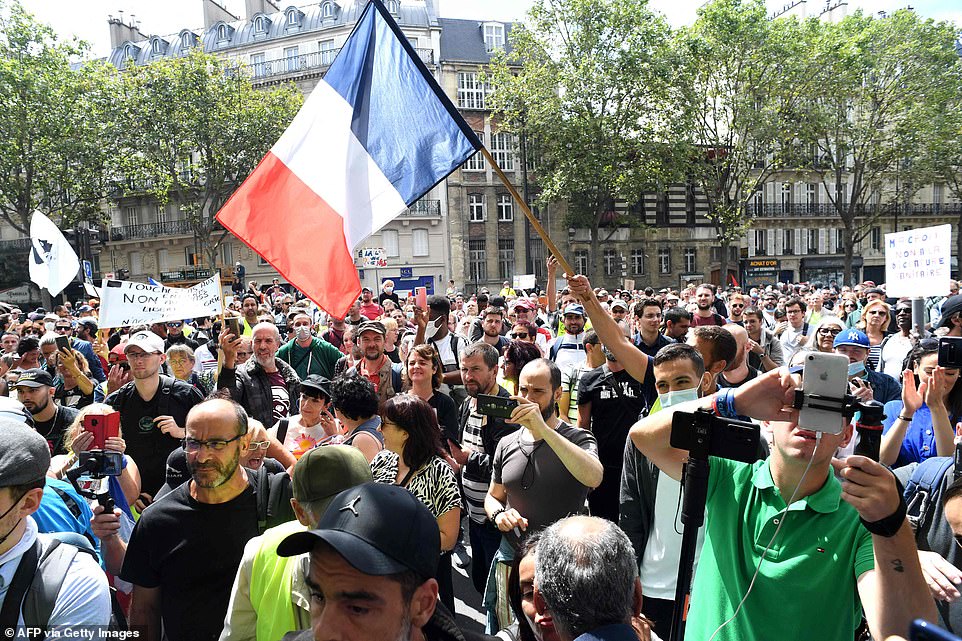 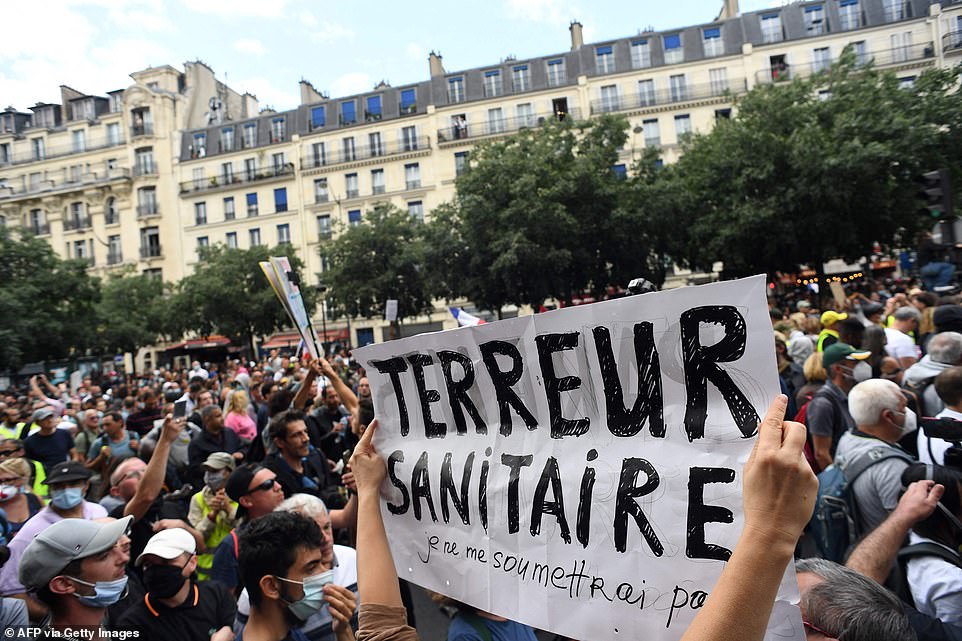 Demonstrator hold up a placard which reads as ‘Health Terror, I will not submit myself’, during a national day of protest 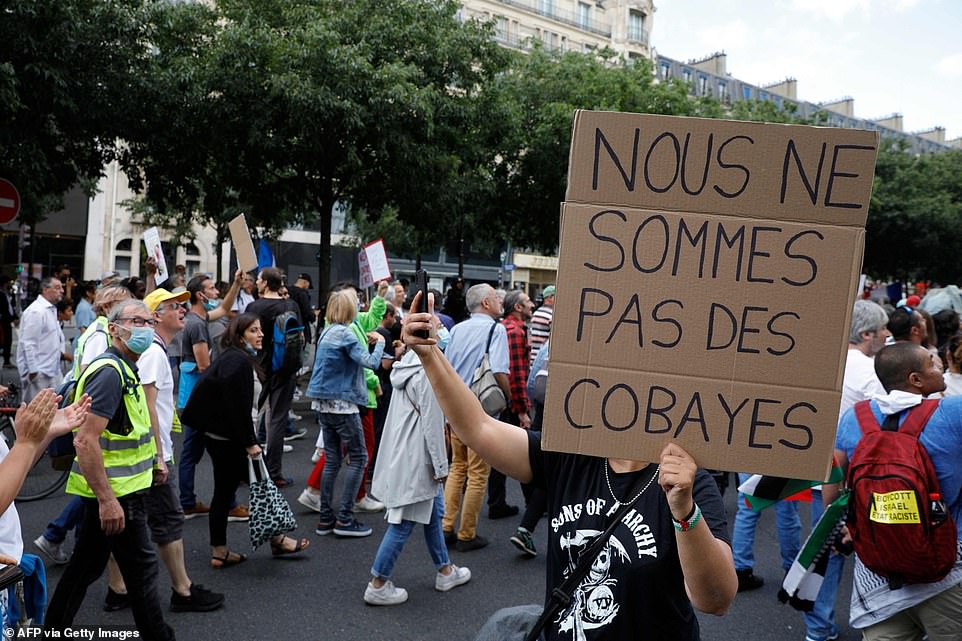 Pictured: A demonstrator holds a banner reading ‘we are not guinea pigs’ during a national day of protest 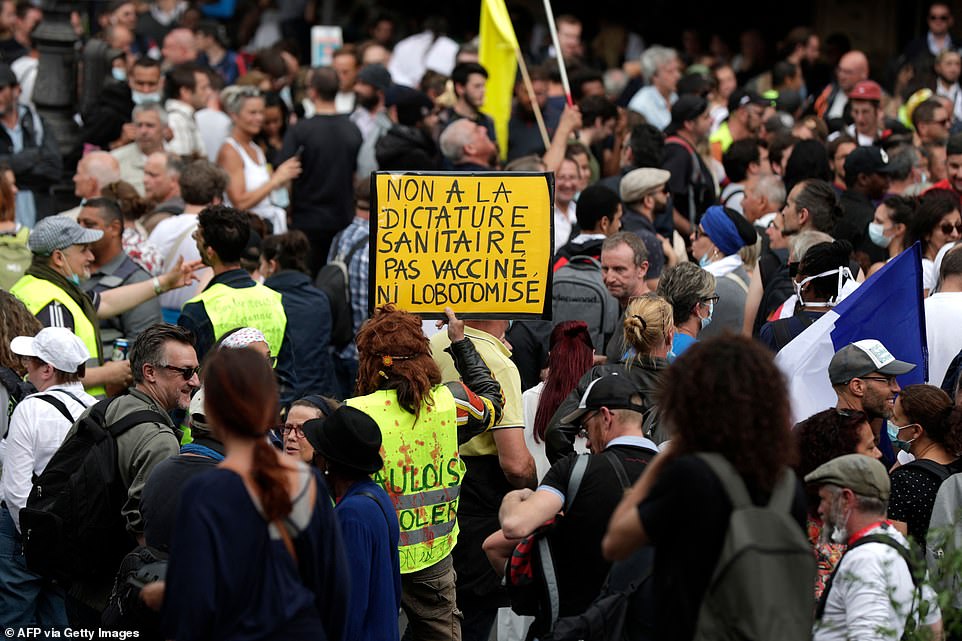 Pictured: A demonstrator holds up a banner reading ‘no to the health dictature, neither vaccinated nor lobotomized’

More than 24,000 new daily cases were confirmed Friday night – compared to just a few thousand cases a day at the start of the month.

The government announcement that the health pass would take effect on August 9 after approval by the Constitutional Council has driven many unvaccinated French to sign up for inoculations so their social lives won’t get shut down during the key summer holiday season.

Vaccinations are now available at a wide variety of places, including some beaches.

More than 52% of the French population has been vaccinated while more than 111,800 people have died of the virus in France since the start of the pandemic.