Thousands of Americans across the country have gone for a dip in icy waters to ring into the new year and raise money for charity.

While some dressed in New Year’s party props, Christmas colors, and Poseidon outfits, others wore nothing but underwear or bathing suits at the annual Coney Island New Year’s Day Polar Plunge, a New York tradition since 1903.

With the temperature sitting at 40 degrees, some said the water was a little warmer, at 41.5 degrees. Supporters of the hardy souls who dared to go for a swim stood by with towels and warm robes as they observed their loved ones returning from the sea.

Coney Island is a neighborhood located on the southernmost tip of Brooklyn and is home to more than 50,000 residents with a poverty rate close to 30 percent.

The Polar Plunge ensures that money is being raised for local charities including, the Alliance for Coney Island, The New York Aquarium, and others.

Thousands of people participated in the annual Coney Island Polar Bear Club New Year’s Day Plunge in Brooklyn, New York, on January 1, 2023, as a couple kiss in the Atlantic Ocean during the event 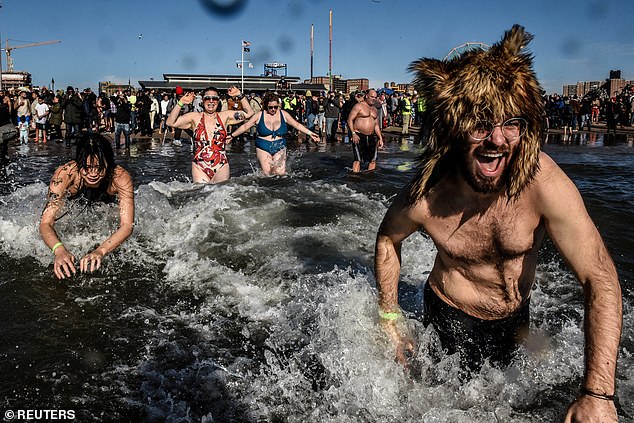 Thousands of brave and dressed swimmers met outside the Coney Island boardwalk before rushing into the Atlantic Ocean, which was set at at 41.5 degrees on Sunday 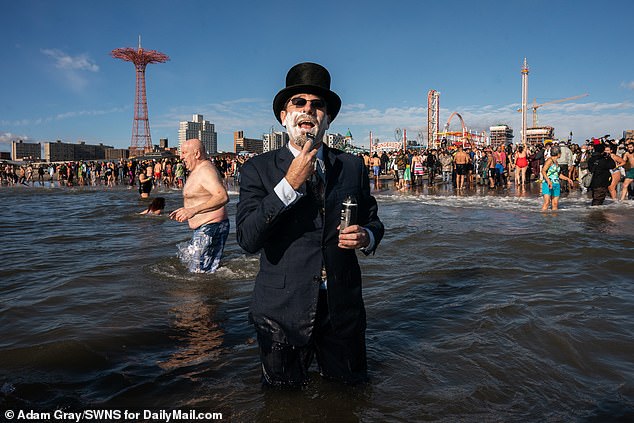 NEW YEAR, NEW FACE: A man wearing a black top hat in a suit shaved his facial hair in the freezing water while enjoying the clear sky and sunshine 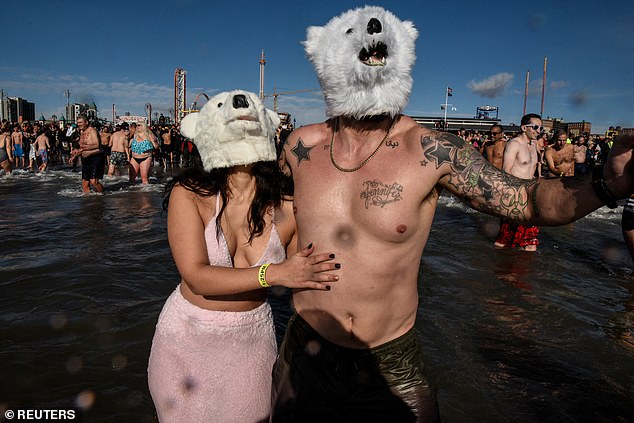 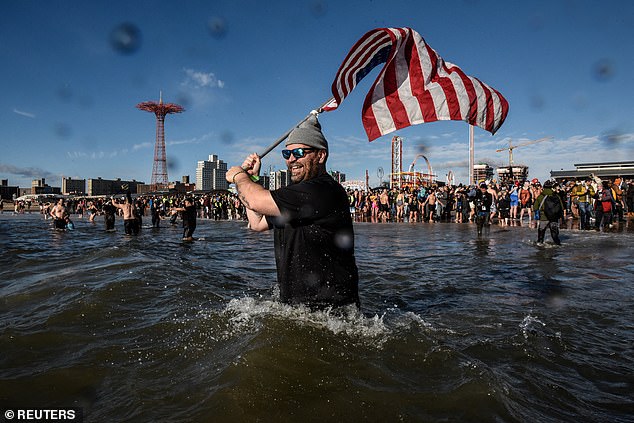 A man waves the U.S. flag as he runs into the Atlantic on a sunny but cold day in New York City 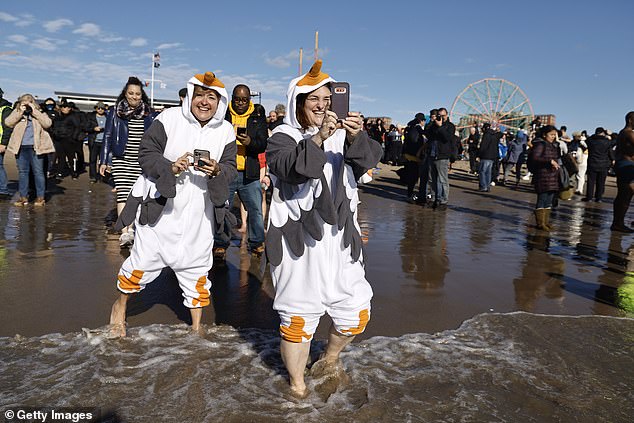 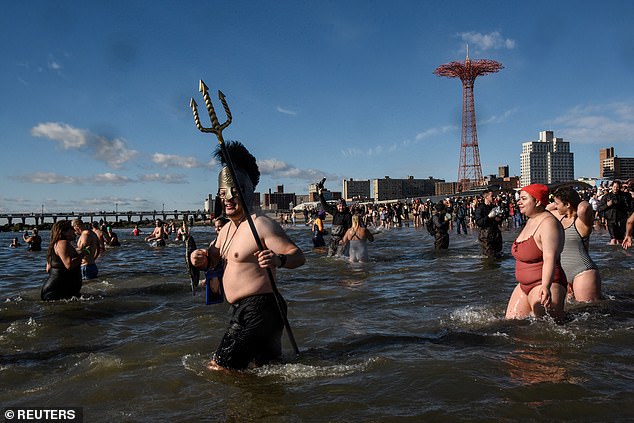 THIS.IS.CONEY ISLAND: A man in a Roman or Greek outfit carrying a trident is seen running into the Atlantic Ocean during the annual Coney Island Polar Bear Club New Year’s Day Plunge 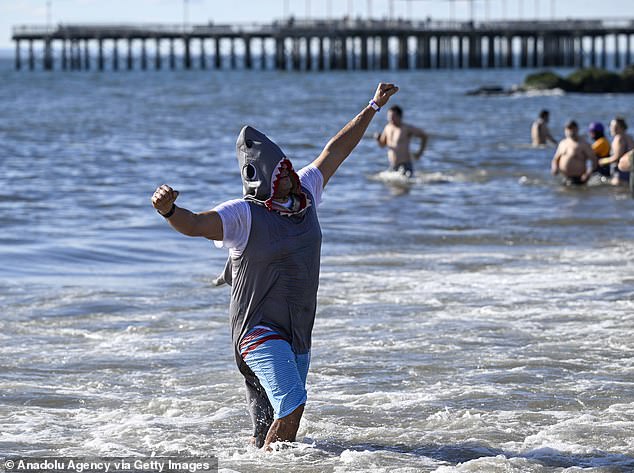 In 2022, there were more shark sightings off New York City’s coastline than in recent years. Pictured: A man dressed up as a shark is seen coming out of the Atlantic during the Polar Bear Club New Year’s Day Plunge in Brooklyn, New York

‘We appreciate all the support from fundraisers that help our local nonprofits,’ he added. ‘We hope that plungers and spectators will stop into our local businesses that will be open on the boardwalk and throughout Coney for their New Year’s Day celebrations.’

As of Sunday evening, the club raised more than $80,000, and will still be accepting donations until January 8.

The Coney Island plunge was just one of several other polar plunge events that took place on the first day of the year. 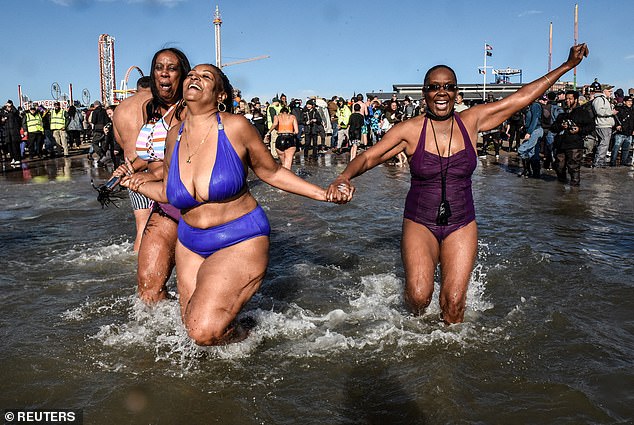 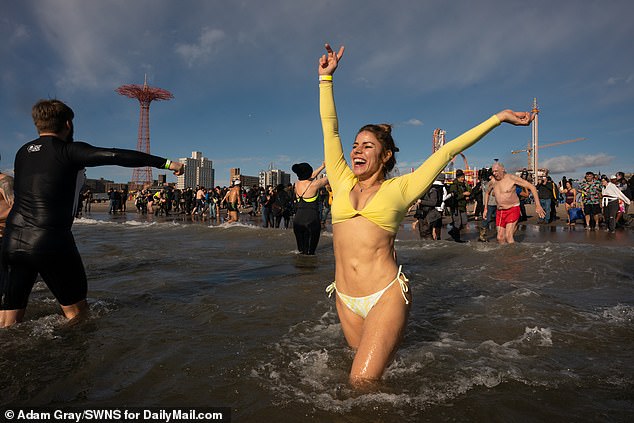 NEW YORK OR RIO?: A woman was fearless enough to get into the water in a two-piece bikini 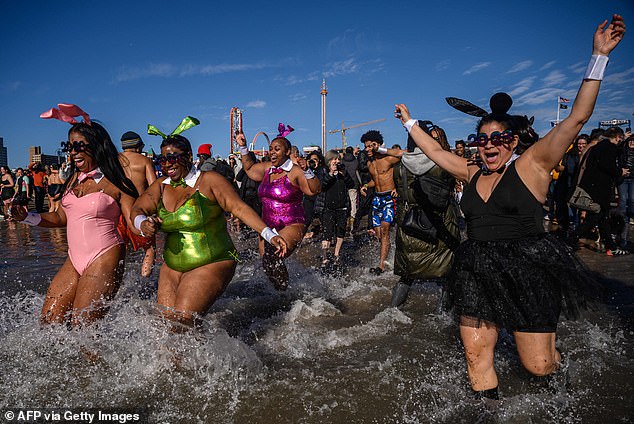 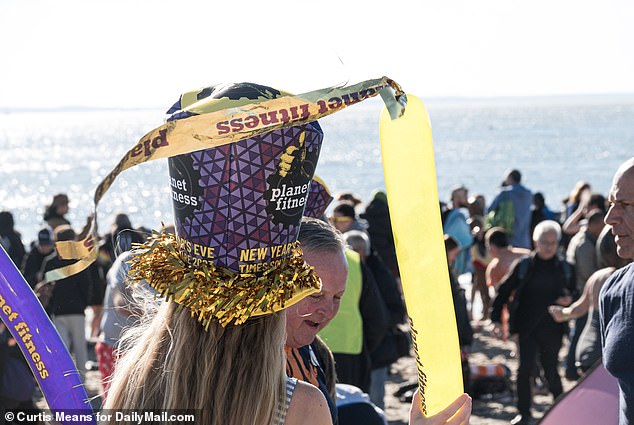 There was a large amount turnout for the 2023 Polar Bear Swim in Coney Island, Brooklyn, NY 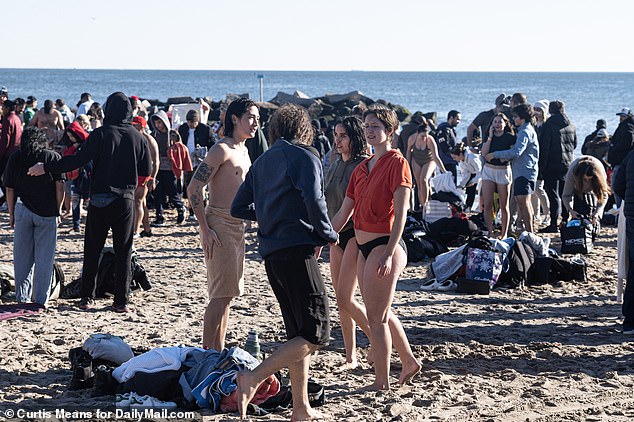 After the event was over, many people stayed to enjoy the remainder of the first day of 2023 at the beach

Men, women, and children of all ages also gathered on Sunday morning in Racine, Wisconsin, jumping into the frigid Lake Michigan for the 30th annual Splash and Dash Polar Plunge.

The air temperature was in the low 40s and the water temperature was 36.9 degrees in a part of the U.S. where there it is not uncommon to see sheets of ice on the sands of local beaches in the winter.

All donations from this year’s event will go to Racine County Food Bank, H.A.L.O. Homeless Assistance Leadership Organization, and The Hospitality Center.

More than $20,000 was raised each of the last three years, according to the fundraiser’s official website. 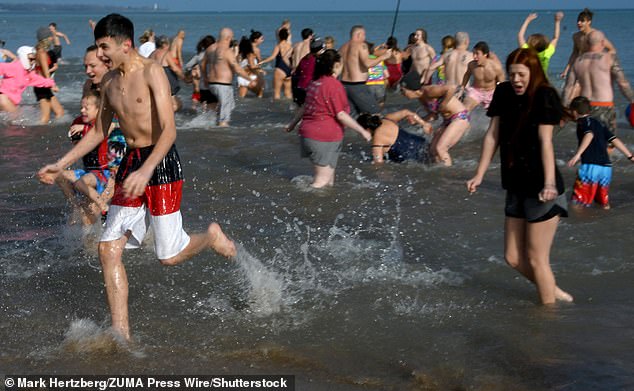 Another Polar Plunge took place at Lake Michigan in Racine, Wisconsin, on Sunday. Hundreds of local residents gathered to celebrate the new year together 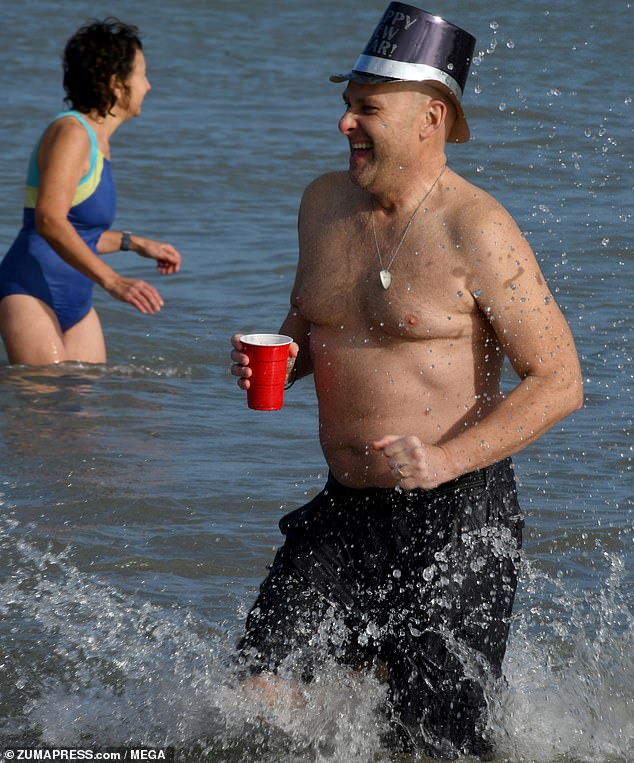 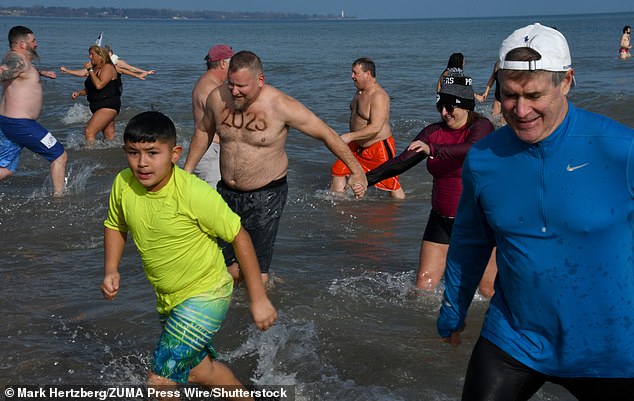 Men, women, and children of all ages participated in the event, which will benefit several local charities 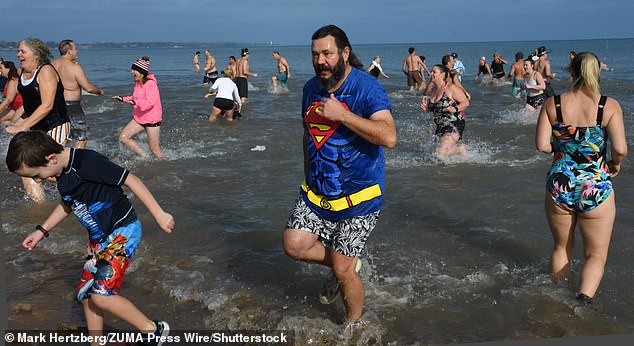 SUPERMAN’S GONE FOR A SWIM: A man immediately ran out of the lake after taking a quick dip

All proceedings were donated to N.C. Mothers Against Drunk Driving (MADD), as an estimated 432 people were killed in the Tar Heel state by impaired drivers.

The 50-degree Mystery Lake is a 15-acre granite quarry lake for the exclusive use of scuba diving and scuba training. It is also 105 feet deep. 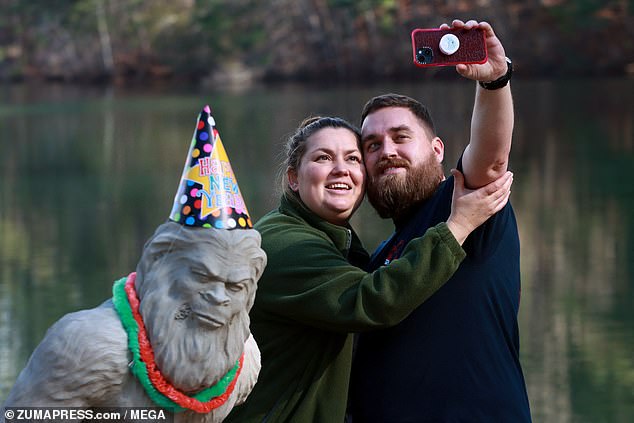 A dozen of people participated in the sixth annual New Years Day Polar Plunge at the Mystery Lake Scuba Park in Wendell, North Carolina, on Sunday 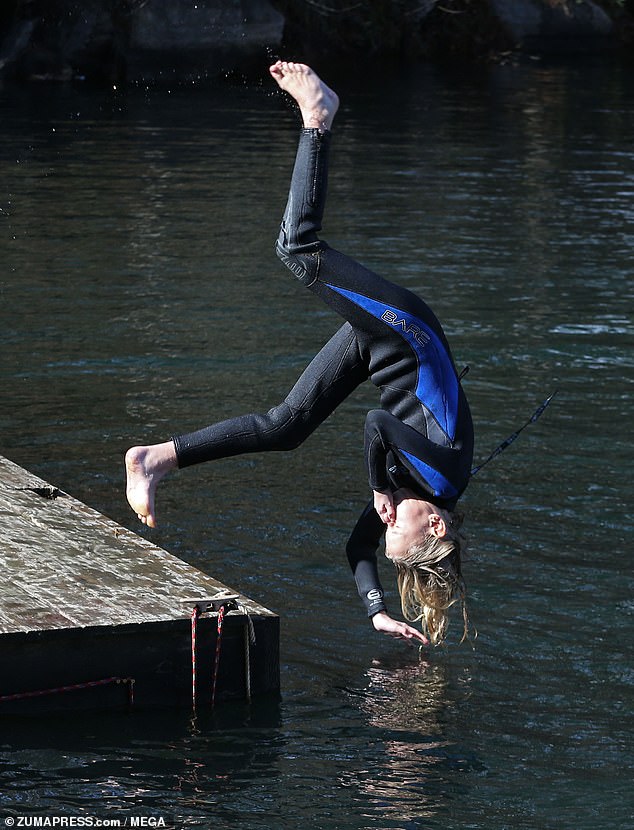 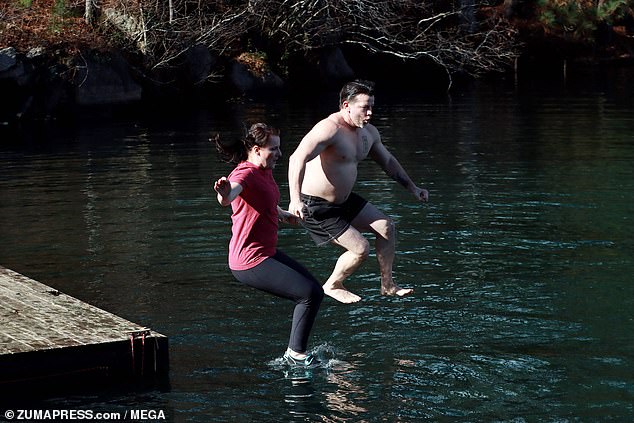 A couple held hands as they jumped into the water together. Lake Mystery is believed to be 105-feet deep 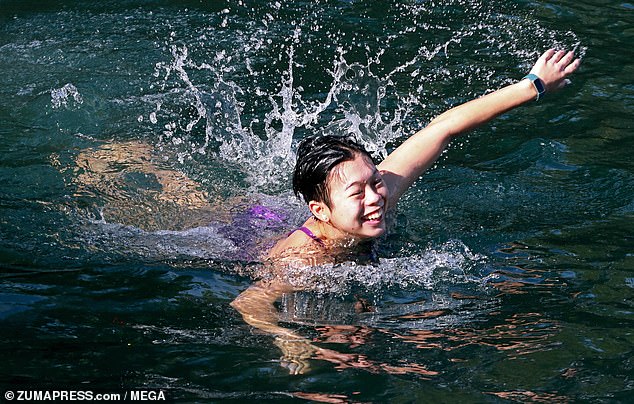 NEW YEAR, NEW SMILE: A woman is pictured swimming in the lake on Sunday. Donations will be given to N.C. Mothers Against Drunk Driving after 432 people were killed in the Tar Heel state by impaired drivers

In New Jersey, temperatures were in the 50s, but the waters were about ten degrees colder when thousands jumped into the ocean in Atlantic City.

Proceeds for this event went towards the Cancer Support Community New Jersey, according to resortsac.com.

Similar events took place off the New Jersey coast in Brigantine and in Long Branch.

‘What I tell everyone, even if they’ve never gone in or intimidated by the thought of it, is, wear your bathing suit under your clothes, because you’ll go in. You’ll get caught up in the energy of the crowd,’ Sean Clifford told NJ.com.

He’s been swimming on New Year’s Day for the last 21 years.

‘It’s exhilarating because everyone is screaming and hitting the water at the same time,’ Clifford added. It’s a total rush.’