Ooh, I say, professor! Academic’s VERY tight trousers leave This Morning viewers distracted – and he even ends up using a paper bag to preserve his modesty

A handsome guest made a strong impression with This Morning viewers, who were ‘distracted’ by his choice of trousers.

Professor James Logan, speaking from the Medical Dog Detection Centre (MDDC)  in Milton Keynes, was invited on the morning show hosted by Phillip Schofield and Holly Willoughby to discuss how he was training dogs to detect covid-19.

However, viewers were quick to pick on the fact the scientist’s trousers were extremely tight – and left little to the imagination.

It appears that the guest, who teaches at the London School of  Hygiene and Tropical Disease, might have been alerted to the wardrobe malfunction, after he was seen holding a white paper bag in front of his trousers by the end of the segment.

Amused viewers took to Twitter to comment on the wardrobe malfunction, with many claiming they were struggling to pay attention to his comments about sniffer dogs.

Professor James Logan, from the London School of Hygiene and Tropical Diseases was ivited on This Morning to talk about how dogs were being trained to detect Covid-19. However, his choice of trousers distracted viewers

Viewers were taken by the Professor’s appearance on the show, and were especially enthusiastic about his wardrobe

‘Sorry what was that about dogs? Too busy staring at the professors crotch,’ one viewer wrote.

‘Those trousers are very snug,’ observed another.

‘Can this professor be on every morning? Asking for a friend,’ said another.

‘Me watching the professor talking about dogs….dogs? What dogs,’ joked one. 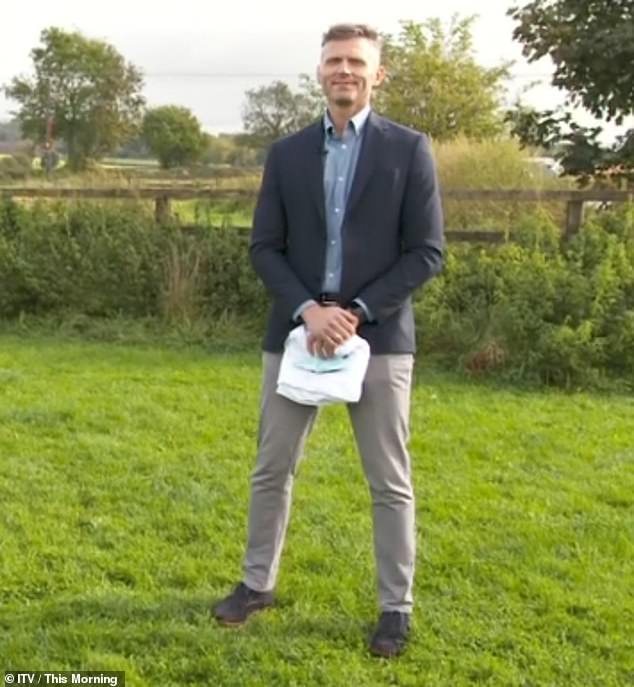 By the end of his TV appearance, the scientist was holding a paper bag in front of his pelvis, to the great disappointment of his fans 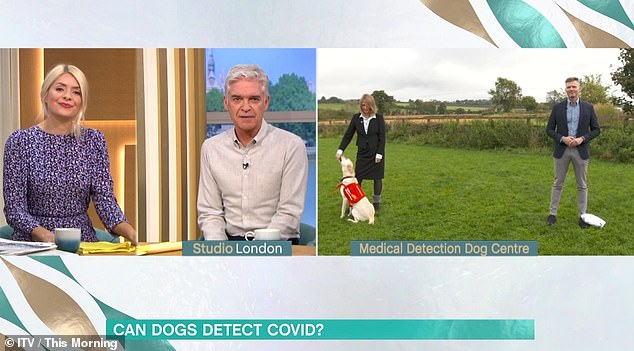 Professor Logan was explaining how dogs can be trained to detect a disease’s specific smell, which could help in the fight against coronavirus

‘Did anyone actually pay attention to what the Prof was saying? Slightly distracted,’ one wrote.

‘I’ll get in touch with you Professor Jame,’ one said.

After his initial interview, the camera went from Professor Logan to Claire Guest, from the who was also speaking about how she was training the dogs.

When the professor reappeared on camera at the end of the segment, he was holding a white paper bag in front of his trousers, suggesting someone had alerted him to his wardrobe ‘malfunction.’ 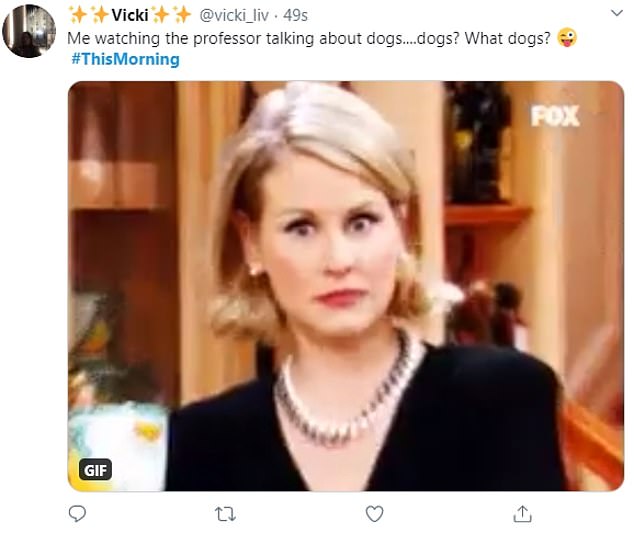 ‘He hid his bulge then,’ one viewer said.

‘Awww someone has told him! Spoilsports,’ said another disappointed fan.

Professor James was on the show to discuss how he was training dogs to detect Covid-19.

The UK has started to run trials to see if the animals can be used in the fight against the virus after Helsinki airport introduced sniffer dogs to detect the disease.

Along with Claire Guest, from the MDDC, Professor Logan explained that dog have been successful trained to detect other illnesses, such as malaria.

He explained that most diseases have specific scents that can be detected by dogs thanks to their amazing sense of smell.

‘Dogs are absolutely incredible. Every time I see them work I’m absolutely blown away by how good they are at sniffing,’ he said.

‘I think we’re pretty sure Covid has a smell, so if these dogs can do it, they can do it very well.

However, Professor Logan said he needed more samples in order to make strides in the research.